The big day arrived on Tuesday with a crew of 7 and the cement truck.  They wanted to bring the truck in across the golf course again, but we said no to that and made them wheelbarrow it in down the side of the house, as their boss had originally promised they would.  So two guys worked pretty hard while the other five got to do a lot of standing around! 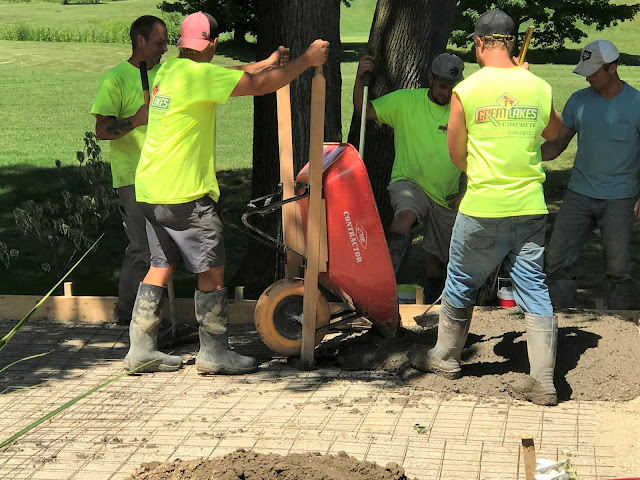 The cement work starts, in the far corner of the patio.  You can see they've laid heavy wire mesh down first for reinforcing.  Having poured a concrete floor once myself (not without problems) I was interested to watch the process. 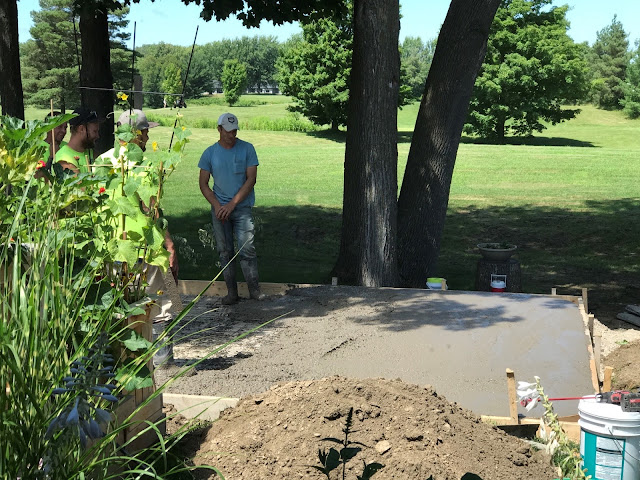 It moved steadily along and they started finishing it off as they went. 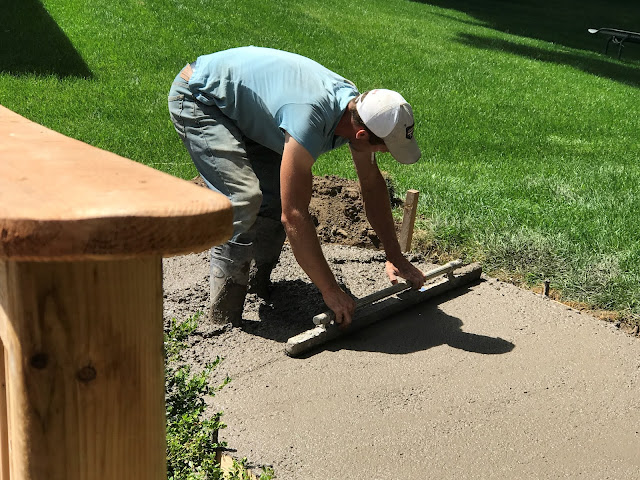 Having done this that one time, I know how swiftly you have to get it smoothed out before it starts to set! 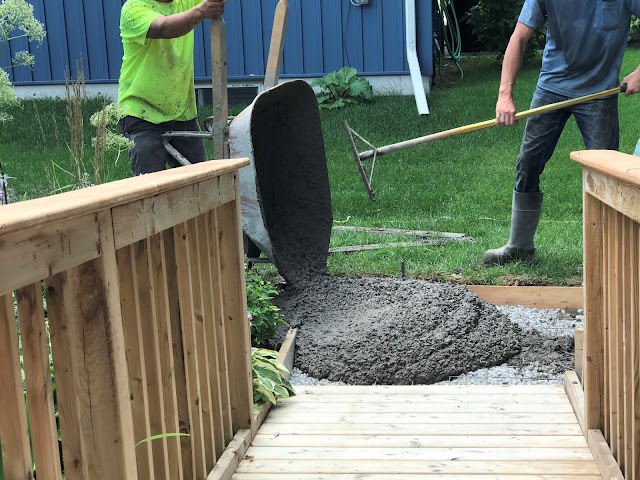 Before I knew it they were at the end, pouring the square at the bottom of the ramp,  This is where they feathered the cement up against the bottom board, and I was very pleased with the results. 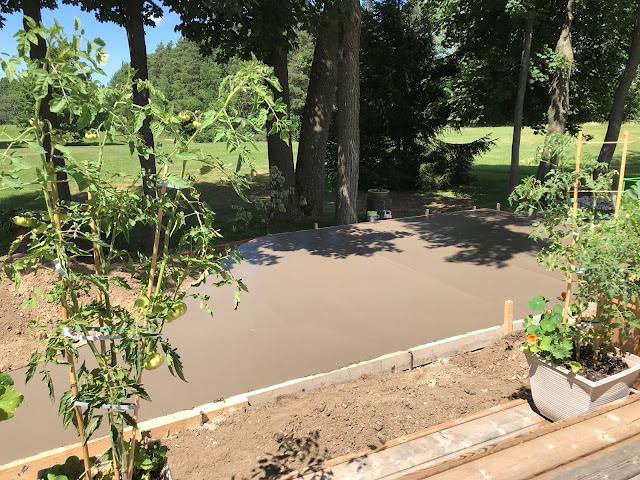 And that point they all had to wait while it started to dry out. 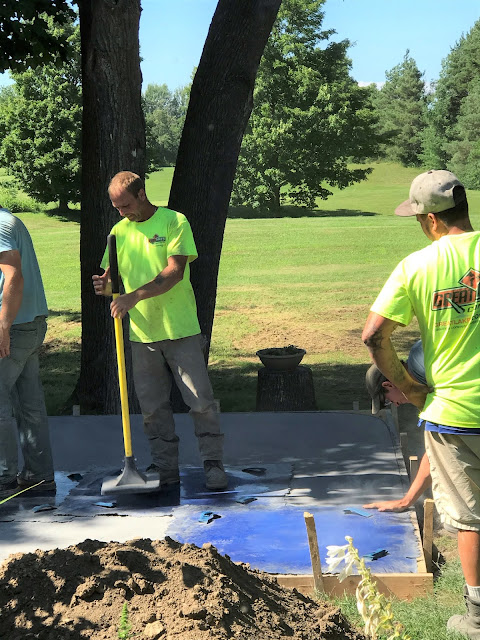 About an hour later it was ready for the stamping.  We chose a random uneven pattern that comes embedded in big rubber sheets.  They place these down and use heavy stamps to impress the pattern into the cement.  It's light grey in colour rather than stark white.  Late in the afternoon they got to go home while we stayed and 'watched the cement dry'!. 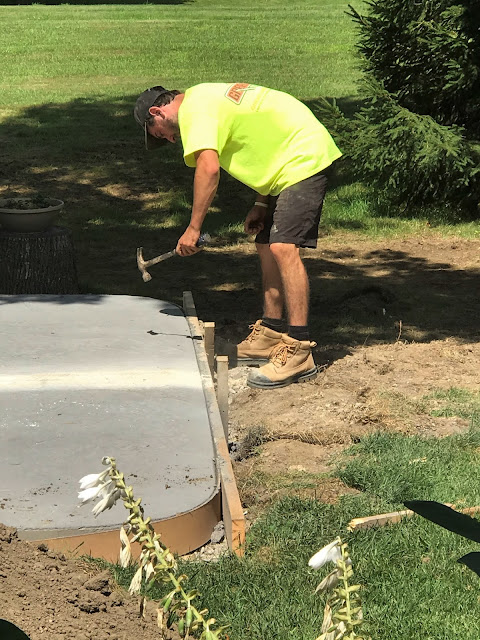 The next day the clean-up crew arrived and removed all the wooden boards and stakes.  I thought some of those stakes would be hard to get out, but not for these guys!  They also cut the pressure lines to reduce the risk of future cracking, a dusty process, so I stayed inside. 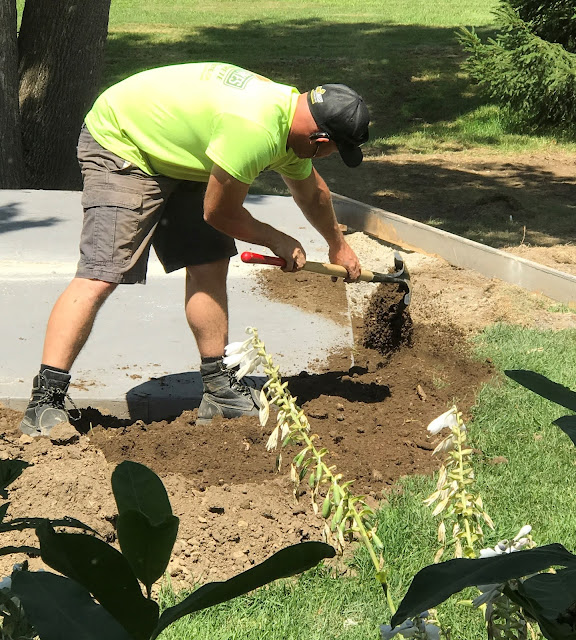 The boss came to the door asking for immediate payment of the full amount, but we said no until they finished tidying up the mess.  They reluctantly moved the excess topsoil around a bit to satisfy us. 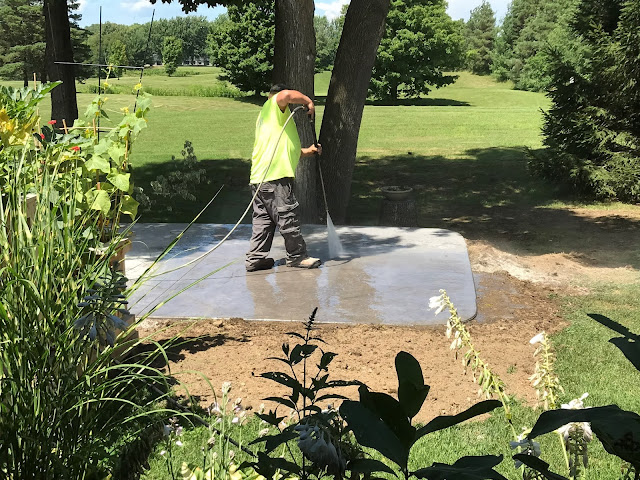 And they even got out a pressure washer to clean it off.  We paid them and they were done. 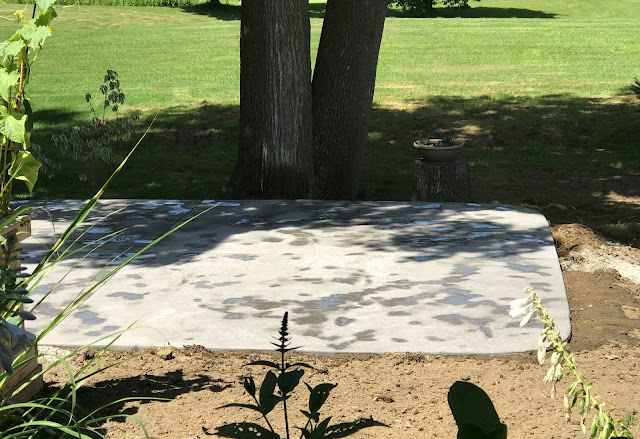 I thought the boss was pretty unprofessional, but we got what we wanted, a finished patio true to Mrs. F.G.'s original sketch.  Now our work begins.  We have a couple of young guys coming this week to get it started.

It's been raining steadily, heavily at times here, and it's a very welcome rain because we need it.  The rain is supposed to continue all day, and parts of tomorrow and Tuesday, so by then we should be nicely saturated!.  I'm sure a lot of farmers will be very pleased, as well as all the creatures big and small who live in our streams, rivers and wetlands.  Hopefully the little now dry stream at the end of the street will have flowing water again, perhaps a lot of it!  A wonderful and welcome break in the weather.