I'm falling behind here; I think it was two weeks ago that we went and canoed a bit of the Saugeen River. It was a great day, sunny, but not too hot, and even though the river is at a low point of the year, there was plenty of water to make it exciting. There is canoeing on the Beaver River, right here in the valley, but it's only a gentle meandering river. The Saugeen is the nearest larger river with a bit of whitewater, and very popular locally; the headwaters of the Rocky Saugeen are only half a mile west of our house. 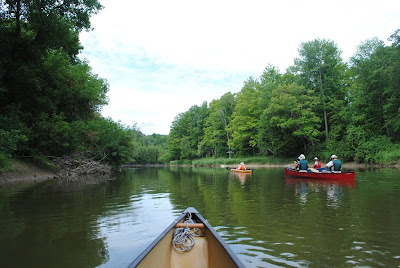 We started at Walkerton and canoed downstream to the first bridge, about a 3 hour paddle. I'm told this section is one of the best on the river, because of the number of whitewater stretches - gentle whitewater admittedly, but fun. And it's true; much of the trip we felt we were just steering more than having to paddle - my kind of canoeing! I've done whitewater trips in northern Ontario, which can be much more challenging, but this was certainly exciting enough to be really enjoyable. 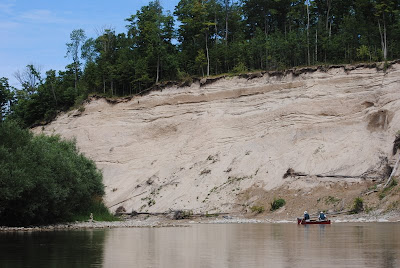 In the middle of this stretch is a bend of huge sand deposits, leftover from the glaciers I presume, perhaps associated with some ancient shoreline. The river hurries around in a huge bend at the base of the cliff, providing a surprising bit of spectacular scenery in rural Ontario, never seen unless you're in a canoe. And it's also remarkably wild. I think we only saw one shack on the shoreline, and the edge of one cornfield, but we saw at least a dozen kingfishers. 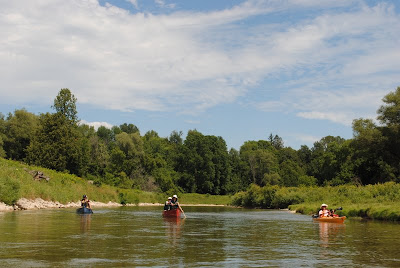 I was paddling my new single 'pack' canoe, the one with a kayak seat and paddle, and it worked really well in the whitewater stretches for the first time. I also learned why they call it a 'pack' canoe - it's not because you can carry packs in it; it's because the original model, built for Teddy Roosevelt who was an avid fly fisherman, was small enough to be packed into the wilderness on the back of a mule!
Posted by The Furry Gnome at 8:54 AM No comments:

The Meadow has Turned Yellow Again

A few days ago, the meadow (at least parts of the meadow) turned yellow again, this time when the goldenrod seemed to come into bloom all at once. The meadow was last looking this yellow in the spring, when the yellow hawkweed was in bloom everywhere. Goldenrod adds nice colour, but it is allelopathic, meaning its roots put out chemicals that discourage the growth of other plants. It tends therefore to be a tough, self-sustaining weed. On the other hand, it is a host for a number of beneficial insects, including some butterflies. 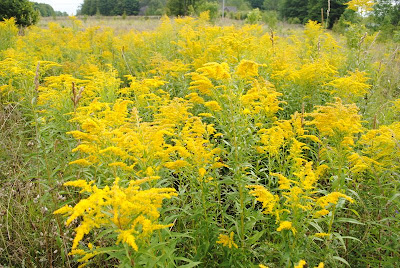 The entire bloom on a goldenrod is actually made up of hundreds of tiny florets that you almost need a magnifying glass to see. This is just one frond in a bloom that may have a dozen yellow fronds. People often mistake goldenrod for ragwort, a common cause of hay fever. 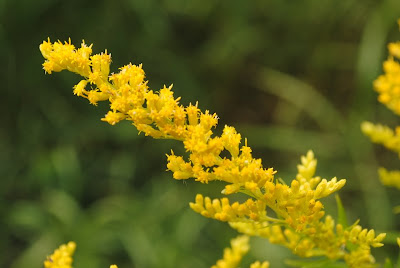 Another interesting yellow plant is the very tall elecampane, its flower a beautiful yellow sunflower type, with very small but bright yellow rays. 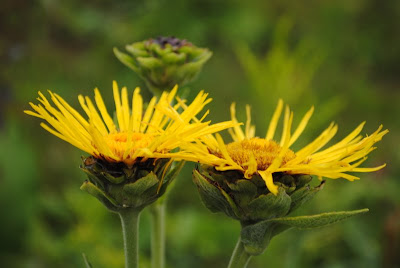 It has huge leaves, perhaps the largest of our native meadow plants, and stands up to 6 feet tall. It likes to grow in wetter corners, where the soil is damp at least in the spring, so it's only found in wet meadows. 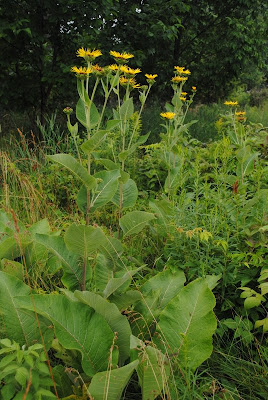 Posted by The Furry Gnome at 1:09 PM No comments:

We see lots of little interesting things that strike me as photo-worthy here and there. This tree frog visited our chairs under the apple tree, and just sat there all day long. They tend to be more active at night, and the tree frog's call is very neat - a sort of a bark sound. I'm sure many people here them and wonder what sort of bird is that, calling at night. 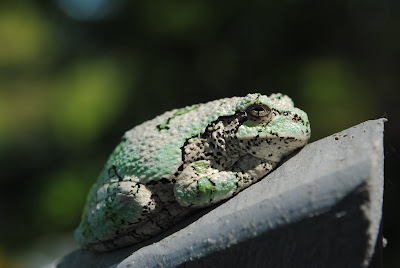 One day after those weeks of hot dry days in July, it suddenly rained, and everthing turned cooler and greener. What we really noticed was how the lichens on the big boulders perked up immediately. Absorbing moisture, they sprung back to life, and showed up against the rock so much more clearly. 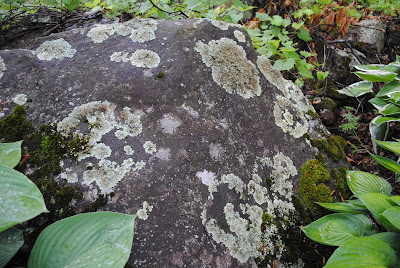 I think this is a damselfly, but I don't know my insects very well. The only one I could find to match the black wings they had is the ...... They were literally swarming around fallen logs along the Nottawasaga River when we canoed it earlier this spring. 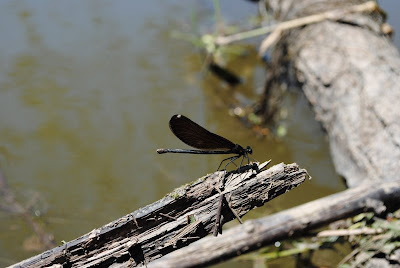 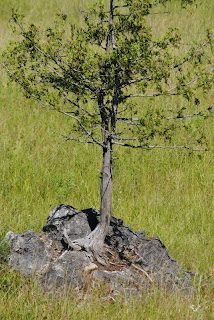 And finally, this is a courageious cedar tree - just a little cedar tree in a pasture, until you look closely and realize that its growing straight out of this big boulder. 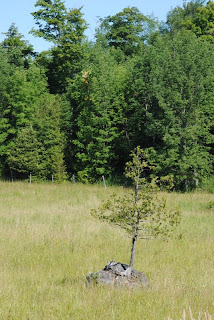 Posted by The Furry Gnome at 1:00 PM No comments:

The Valley in the Summer

The valley in the summer seems to me a lazy, hazy place, perhaps because I just drive through it occasionally, on my way to the trail, a potluck, or the general store in Kimberly. The lighting is almost always a little hazy, except for early in the morning, and everything looks green. As there are fewer and fewer active farms, there is more and more young forest, as well as a lot of mature forest on the upper slopes and valley bottom. 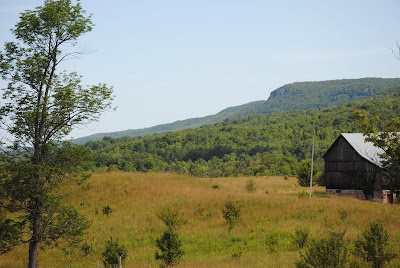 The cliffs and hills of the Niagara Escarpment do add a lot to the view that you see. It's not just flat countryside, but a wide shallow valley to the north, getting narrower and narrower as you come south. The two ski clubs are nearer the south, where the valley is quite deep compared to its width, and slopes are quite steep. Both are on the west (or east facing) slope, where the snow lasts a little longer in March. And every time I drive by in the summer, I think about how quiet they are for 9 months compared to the 3 months of winter. 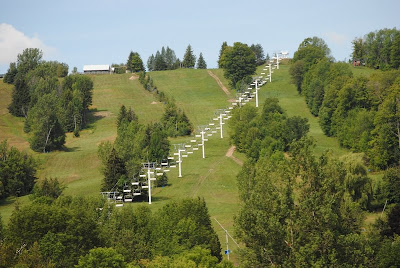 In reality there is a lot going that doesn't show up in a wide view of the valley - farmers dealing with crops and livestock, hikers along the trail, numerous small construction projects, usually either new homes or additions, tourists visiting to walk, fish, canoe and kayak, and so on. In our case we've been gardening like mad for 8 weeks now. But for me, fall is the hiking season, and winter is the skiing and snowshoeing season; that's when the valley seems really busy. For now the valley is a peaceful and beautiful place. 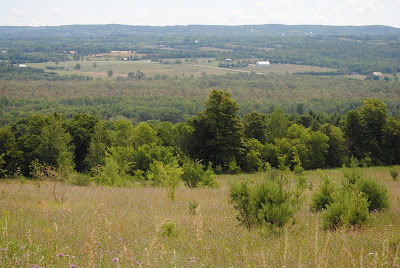 Posted by The Furry Gnome at 1:13 PM No comments: 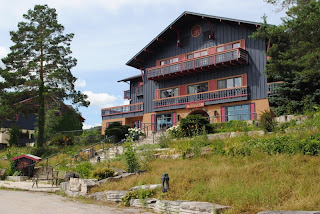 Talisman Ski Resort is one of two ski hills in the Beaver Valley, and has been a popular public ski hill for nearly 60 years. I remember it as the place I learned to ski in the mid-sixties. But now it sits closed and seemingly abandoned, deteriorating fast.

As a ski resort, Talisman is public, not a private club, and drew a lot of its users from schools. I'm told it was not unusual in the past to see 20 school buses in the parking lot almost every day through the winter. It also operated as a year-round resort, with a hotel and golf course to attract visitors the rest of the year. The golf course wasn't large, but was popular. 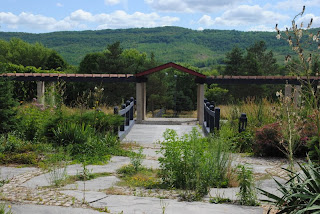 But a few years ago the resort was sold, and local opinion seems to be that the new owner was more interested in real estate than in running the resort. It has gone downhill ever since, while plans were laid for condos and ski chalet subdivisions. Full-page ads appeared in glossy real estate magazines, but apparently not a chalet lot or condo has been sold. By last March the money had run out, both the ski hill and the hotel operations were failing, and the resort closed - apparently with numerous unpaid employees and bills to local contractors. Rumour is that it is for sale, or has already been sold. 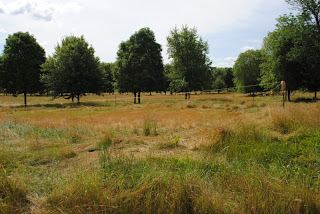 Meantime, 4 months of no maintenance has left the resort looking pathetic. The hotel just sits there, weeds growing through what was once a nicely landscaped entrance. The golf course has been virtually destroyed very quickly, with fairways grown up in grass, sand traps filling with weeds, and greens hardly recognizable if it weren't for the fact that they are roped off. 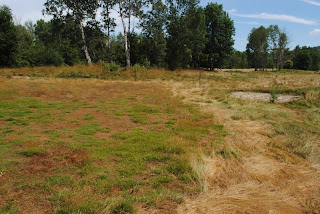 And nearby sit the real estate signs - what's left of grand plans, while 100 local people have lost their jobs. A sad situation all 'round. 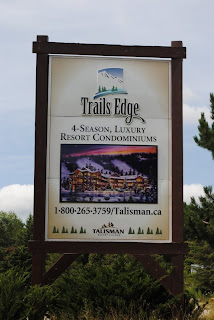 The Seasons Have Turned

The signs are subtle, but the seasons have turned toward fall, or from early summer to late summer if you will. What I think of as the fall flowers, the brown-eyed susans and variations of these, and the coneflowers, are out in the garden. The birds are much less noticeable; only a few common ones like the robins and goldfinch are still always about and singing. But the insects have started, cicadas calling from the tree tops, and crickets chirping in the long grass; they'll continue until the first heavy frost. 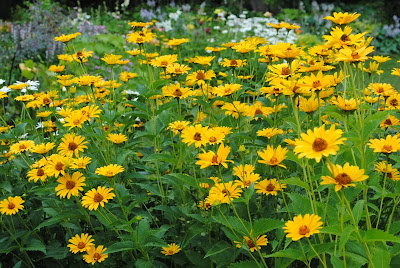 The hot weather has mostly broken, and we're getting the odd cooler day. And there's usually a heavy dew in the morning, enough that your shoes get wet as you walk through the grass. The sun seems to disappear behind the trees a little earlier in the evening, and even on the hot days the evenings are a little cooler. And in the morning the sunrise is definitely later, after 6 rather than what seemed like 4 a few weeks ago. 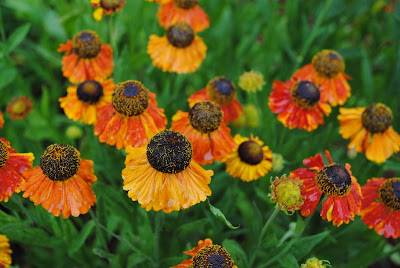 On the farms a second cut of hay is underway on some fields, and the long run of crop harvests has begun. It starts with the wheat harvest, and will move through all the other crops well into October. Here at our place the garlic has been brought in from the garden and is now all in the garage, drying. 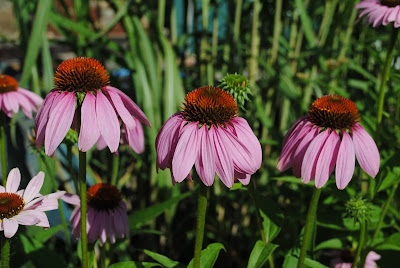 After suffering through the extreme heat and humidity of July, I'm glad to get some cooler weather.
Posted by The Furry Gnome at 8:20 AM No comments: