After yesterday's storm and this morning's streamers off Georgian Bay, winter has come to the valley. Trees are covered, the fields are white, and the ski clubs are open, snow making at full blast. There's still a haze of snow in the air, the hills of the valley looming faintly in the distance. And over it all loom the rocks of Old Baldy, as always.

It's harder to capture with a camera than you think, but here are a few shots -scroll down to see winter in the valley. 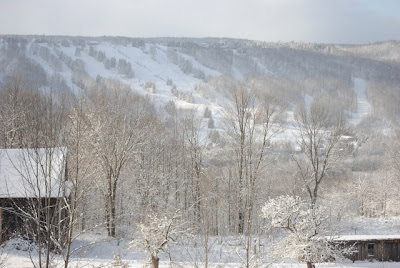 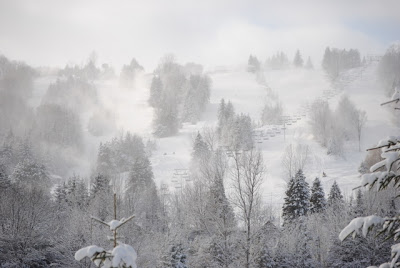 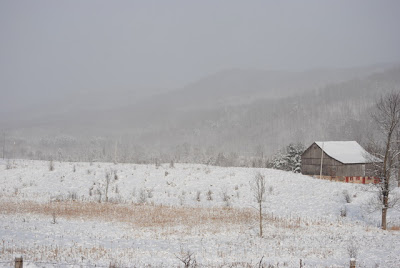 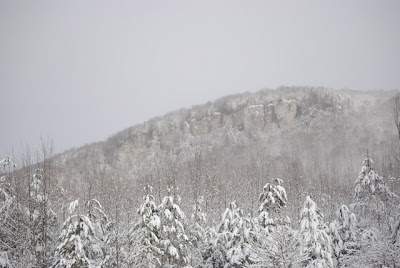 Posted by The Furry Gnome at 3:00 PM No comments:

We got even more snow overnight than I expected. The storm ended by midnight, but after the low pressure system had passed by with it's fine wet snow, the temperatures plunged, the winds shifted to the northwest, and we now have strong breezes off Georgian Bay bringing snow streamers southeast. It's mostly over Collingwood and Barrie, but we're getting the west edge of the streamers, so it's been snowing gently all morning. This is light fluffy stuff, accumulating on top of the heavier snow from yesterday.

Got the snowblower out for the first serious time cleaning the driveway; it's about 8 inches deep, or 20 cm. now. The snow has clung to everything, so I must get out with my camera later on. On days like this I feel sorry for people who don't like winter.
Posted by The Furry Gnome at 10:43 AM No comments:

The storm has gone all day, and it's been snowing now for 12 hours, though never very heavily. But we've accumulated a good 12-15 cm. of heavy wet snow on the ground, and it has stuck to all the branches in heavy white lines. I won't be surprised if some evergreen branches break under the weight of this snow, and I expect it will truly be a winter wonderland tomorrow.

The temperature is supposed to plunge tonight though, so I went out and cleaned off the cars, opening and shutting all the doors, in the hopes they won't freeze shut overnight. There'll be some work to be done in the morning! And maybe some photos to take.
Posted by The Furry Gnome at 10:45 PM No comments:

Snow, but not enough yet

Well, the snowfall gradually increased as the day passed, and the world is white again. It's very fine, wet snow, so it's stuck to all the trees; tomorrow will be a winter wonderland. But because it's fine, it's packed pretty densely, not that light fluffy stuff that piles up deeply.

Judging by the radar, a lot of other places south and east of us got a good deal more snow than we have. Here it's only maybe 5 cm., but at least it has kept on snowing, and looks like it will keep snowing for quite a while yet. Not the deep snowfall I'd like, but a respectable snowfall, especially if the temperature drops as forecast, and it doesn't melt away like the past 4 snowfalls in December!

Here's hoping for lots more over the next week or two. Will there be enough for the first snowshoe hike of the year on Jan. 1st?
Posted by The Furry Gnome at 5:21 PM No comments:

So Far, It's Disappointing

Two and a half hours later, and so far, this storm is disappointing. While the radar showed rain, then snow all around us, nothing has actually happened outside til now. Now, if you watch really really closely, you can see some fine snowflakes drifting down. The snow is so fine and falling so gently, you really have to concentrate even to see it, while the radar still shows this great big swirling storm, now overhead. Bah humbug! I want some real winter!
Posted by The Furry Gnome at 11:05 AM No comments:

I love watching a passing storm, both on the radar and out the window. It's been almost a no-snow Christmas, which I expect has disappointed a lot of people, but the forecast suggests we're now finally going to get some serious white stuff.

The radar shows a huge swirling storm centered over the eastern U.S., with the leading edge moving up from Michigan across Lake Huron. It should reach us within an hour or so. Looks like it will be rain at first, and then as temperature drops, it will turn to snow. When and how much we'll get remains a question.

For me, the bigger this storm is the better.
Posted by The Furry Gnome at 8:31 AM No comments:

Well, it's winter again this morning, -10, and a light dusting of snow, so at least things look white everywhere. But that's after another two days of cold rain, and all the earlier snow disappeared. A lot of people who plan to spend the winter skiing and snowshoeing will be disappointed if we don't get some serious snow soon!

And the ski clubs are already struggling. Just a poor thin bit of white on one or two slopes of each club when we drove to Collingwood the other day. They'll have the snowblowers going like mad today and tomorrow with the cold temperatures, in hopes of Christmas holiday skiing.
Posted by The Furry Gnome at 10:34 AM No comments:

It did snow yesterday, wet and sticky snow that covered everything, though the temperature was hovering close to zero. But then overnight the temperature plunged and we woke up to a bit more snow, and minus 15! All the wet sticky snow had turned to crunchy popcorn ice, and the cars were totally frozen shut.

Today has been a beautiful, if cold, winter day. Sunshine, blue skies, and snow on every tree trunk, every hawthorn twig, every weed and blade of grass in the field. Walked through the woods and around the trails on the old farm west of us, and it was absolutely beautiful in the late afternoon sun. Should have taken the camera.
Posted by The Furry Gnome at 4:19 PM No comments:

The late fall season drags on, postponing the skiing and snowshoeing. We've just finished two long days of cold December rain, leaving us with no snow at all. And the whole landscape is saturated.

Today the snow is back, but only a little. Though we were under a streamer off the lake for a few minutes earlier, there's still only an inch or two of white stuff. The world looks pretty, but not enough snow for any serious winter stuff. Sooner we get a foot or two the better for me!

It's been snowing all day, starting overnight, and continuing just as light snow that was supposed to amount to a cm. or two. It was lake effect snow, brought by the strong westerly winds that covered all of southern Ontario, and by dark it amounted to nearly 4 or 5 inches.

Lake effect snow flurries look very different on the radar than low pressure systems, like the last storm to go through. Low pressure systems usually show up as a long curving band of rain, moving up from the U.S., often all the way from the Gulf. They move north or northeast and gradually out to the Atlantic, either via Quebec and Labrador or further south, by the U.S. Atlantic coast, New England and the Maritimes.

Lake effect snow just comes from the Great Lakes, emerging 'on-the-spot' on the radar, and moving east, but in a continuous pattern where more snow is always emerging in the air being carried over the lakes, and blowing east. Our snow tends to come from Lake Huron, while winds over Lake Erie dump snow on Niagara Region and Buffalo, and winds over Georgian Bay dump the white stuff on the area from Collingwood to Parry Sound.

In late afternoon the clouds that had been overhead all day dispersed, and briefly we had clear blue sky, until it faded to dusk, with a huge full moon looming over the trees in the east. Until we get snow cover, evenings in late fall are very dark, but once the landscape is covered in snow, a full moon can make it very easy to see outside just because of the reflection.
Posted by The Furry Gnome at 5:29 PM No comments: