It was a beautiful spring day, clear blue skies and almost warm temperatures; snow was vanishing fast.  And the early spring birds are all suddenly back - the first robins, the grackles, starlings, redwings, and a killdeer. And two days ago we saw the first turkey vultures. Spring must be here. 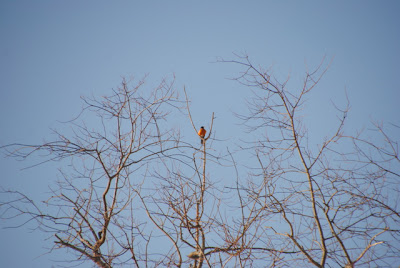 Posted by The Furry Gnome at 10:08 PM No comments:

I'd heard through the grapevine that swans were to be seen on Lake Eugenia, so I drove over to see.  About 25 or 30 were sitting on the ice or floating gently around, mixed in with Canada geese and some ducks.  Migrating swans are one of the great signs of spring in southern Ontario, gathering in a few places like Long Point by the thousand on their way north.  They rest and feed for a few days, or until the weather is to their liking, and then head on to the arctic where they'll nest. 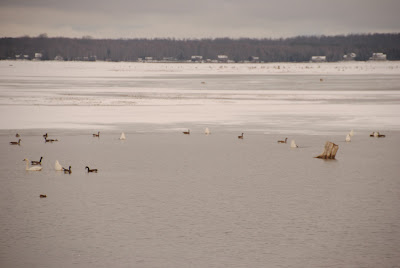 These are likely tundra swans (formerly known as whistling swans), the most common wild swans in Ontario.  Trumpeter swans have also been reintroduced to Ontario, confusing the issue, and there is now an established breeding population.  The Trumpeter Swan Society has a good website on the different identification features.  Generally, the trumpeters are noticeably larger, but they're still quite rare compared to the tundra swans.

At any one moment, about half of them were ass-over-tea-kettle in the water, feeding on invertebrates and plants on the lake bottom - the main thing they need to do to have energy to continue their migration.  Lake Eugenia is an artificial lake, created in 1914 or so when the hydro plant here was built, and the water is let down somewhat in the winter, so the lake is quite shallow beside the causeway where the swans are gathered.  In any case it was great to see them and know that spring is actually arriving. 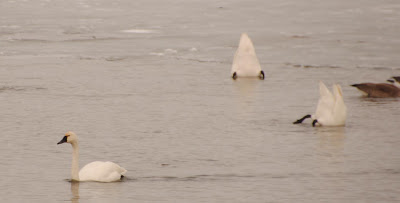 Posted by The Furry Gnome at 12:06 PM No comments:

The temperature has risen, though only slightly above freezing, and at least part of the time, the sun is out.  It feels like winter is finally slipping away - though for the past 3 hours we've had very light wet snow.  By now the roads and the driveway are bare, though everywhere else is still white, quite a lot of white in places.  Believe it or not, there is still skiing, even cross-country skiing, something I've never heard of in late March. 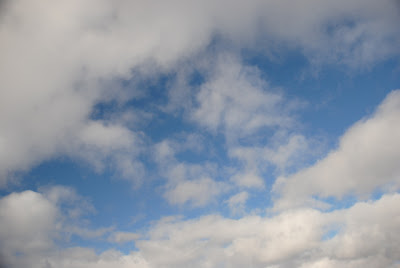 It was sunny off and on the other day, so I headed out with the dog, determined to get some pictures of the brilliant blue sky.  We started into the woods, came out into the old farm fields, and I started looking for pictures that spoke to me - and the grey clouds started blowing over, obscuring the sun and the blue!  The sun kept reappearing, but briefly, and within minutes the grey clouds had taken over. 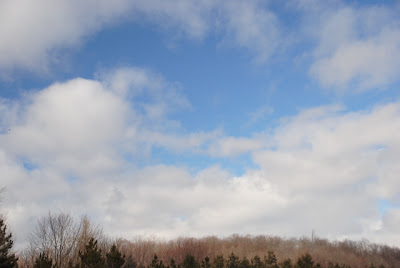 So we headed back home, and I thought I'd missed the chance.  As luck would have it, by the time we got home the grey clouds had thinned again and mostly blown over, leaving at least a little bright blue sky for me to capture.  Spring is in the air!
Posted by The Furry Gnome at 8:13 PM No comments:

I can never get over the east winds that precede a low pressure storm across southern Ontario.  I have to remind myself that air masses circulate counter-clockwise around low pressure systems in the northern hemisphere, and then I understand.  Even though the huge air mass of the storm is moving steadily out of the south-west toward the north-east, that front edge of the storm consists of winds moving from east to west.  Monday morning they were definitely east or south-east winds, drifting light snow across the roads and bringing bitter cold. 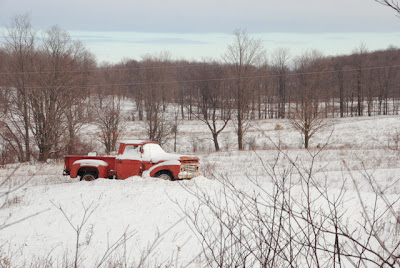 The old red truck on the 9th line.

But that storm moved through Monday, with more snow and quite serious drifting in places that evening.  Then Tuesday the low pressure system had left, and we had the usual snow bands rising off the lake to the north-west.  This morning we woke to 6 or 8 inches of additional fresh powder snow!  I thought I had put the snowblower away for good this year, but no such luck. Winter just seems to want to stay around this spring.

So we mark the first official day of spring with fresh snow, and no sign of winter leaving any time soon!

Posted by The Furry Gnome at 8:10 PM No comments: 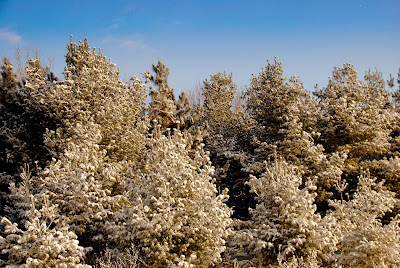 It was a beautiful winter's day, with fresh powdery snow in the morning clinging to all the branches, against a bright blue sky.  Everything looked like a winter wonderland again, and it was seriously cold, bitterly so when you turned to face the north wind!  And all in mid-March.  Last year the snow was virtually gone on this day, and the temperature was ridiculously high.  Today it stayed below zero all day.  Even so, the power of the sun evaporated a lot of snow, and within a couple of hours the snowy branches of early morning were gone.

I'm starting to learn Lightroom, the software I've finally decided to use for managing my photos - though I think I've enriched the colour of the skies a little too much in these. 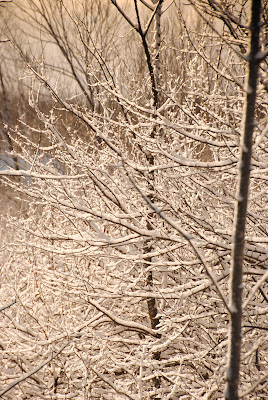 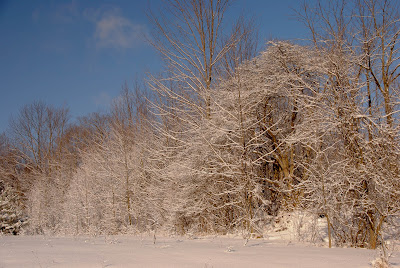 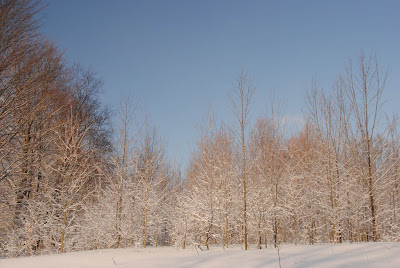 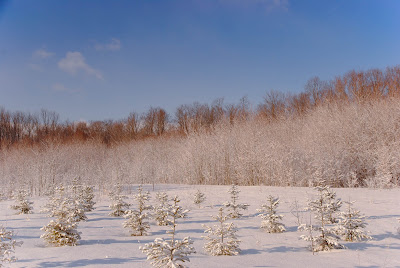 Posted by The Furry Gnome at 8:57 PM No comments:


This heavy frost was a few days ago too, but made for some challenging pictures trying to actually get the frost in focus.  Many other pictures turned out just slightly out-of-focus, but these seem ok.  The pines along the edge of the yard were particularly white, rimmed with the hoarfrost in the morning.

Meanwhile, winter is refusing to give up, and the weather is staying below freezing even in the middle of March.  Though it's great for the skiers to get in another week or two of winter, it's not so good for the maple syrup, which needs temperatures rising about 6 degrees and getting at least a little above freezing. 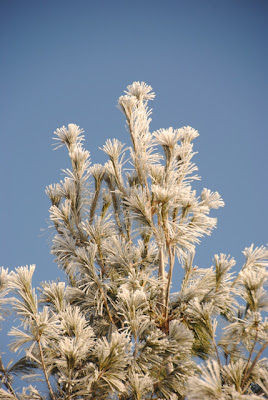 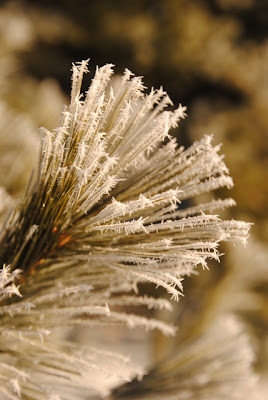 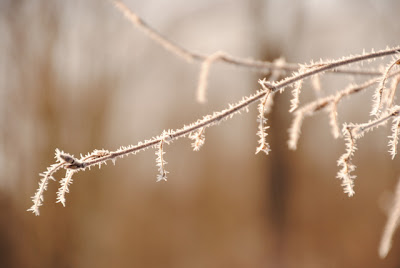 Posted by The Furry Gnome at 7:00 PM No comments:

Well, it feels like spring rather than late winter, 10 degrees out today, and snow melting fast.  So fast some of it is running into the basement!  But a week ago we had a wonderful snowshoe walk through deep powder snow over near Loree.  Through pine plantations, and along the old fencerow marking the edge of the larger deciduous forest, and it was all draped in snow. 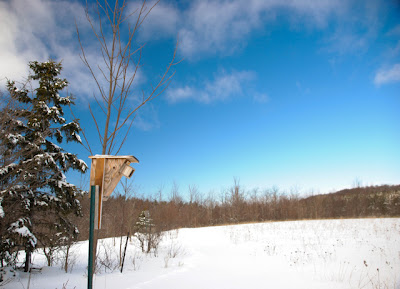 It was sunny with brilliant blue skies, but cold, and perhaps as it turned out this week, about the last day of real winter this year.  The snow is certainly all melting and mushy a week later, even though it's still quite deep, and the snowbanks quite high.  In the meantime, this may be remembered as our last winter snowshoe this year. 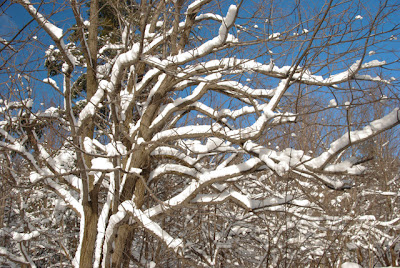 Posted by The Furry Gnome at 8:27 PM No comments:

The Seasons have Changed - Sap is Running!

A beautiful sunny late winter's day, a perfect start to maple syrup season.  Some friends of ours tap a few sugar maples in a home-scale maple syrup operation, so I went to help a little and document the start of the season.  They had their toboggan loaded with the tools and buckets, and out we went. 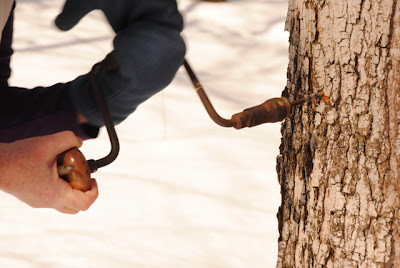 First, they drill a hole, with an old family hand auger, carefully placed on the south-west side of the tree.  And low enough that as the snow melts, you'll still be able to reach the buckets! 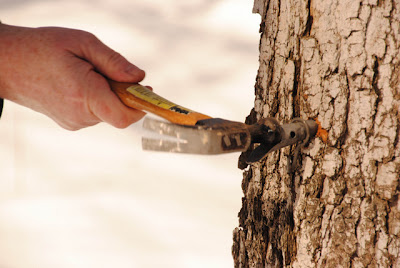 The spile goes in with a few taps of the hammer, and on at least one tree, the sap was dripping before we got the bucket hung. 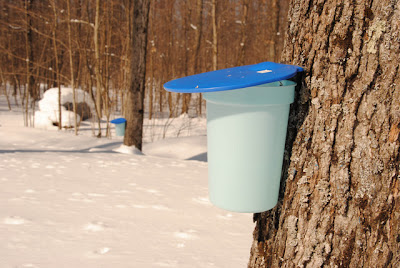 Up go the buckets, and on goes the lid.  Then you just need to wait for the sap to run. But we didn't have to wait long; the first few drips were accumulating as we finished. 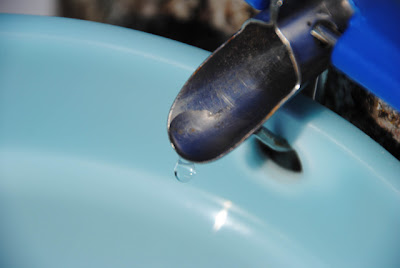 They only tap a few trees near the house, but when we were finished, the sap run was underway, with buckets on more than a dozen trees waiting for the sugary sap to provide the basis of this year's syrup. 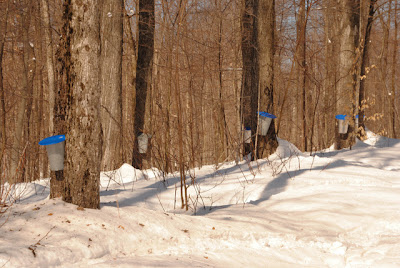 Posted by The Furry Gnome at 8:11 PM No comments:

At this time of year there are always days when it feels like spring is coming.  In January you don't really notice the slowly increasing daylight, but by February it becomes obvious, and now it really makes a noticeable difference.  The sun rises earlier, and we no longer get up in the dark; it's still light out til after 6, and I can walk the dog a lot later than before. 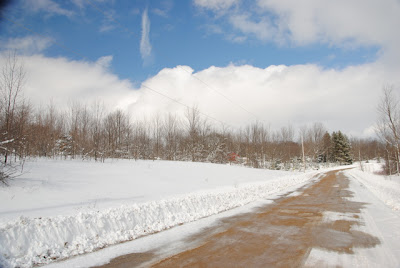 There are days too when it just feels more like spring.  If the sun shines and it's a blue sky day, the temperature rises, and even if it doesn't go above freezing, the heat melts the snow on the road - as in the picture above, though this was two weeks ago.  Now a sunny day makes you think of maple syrup, and folks who make syrup will be out tapping the trees any day, if they haven't already. 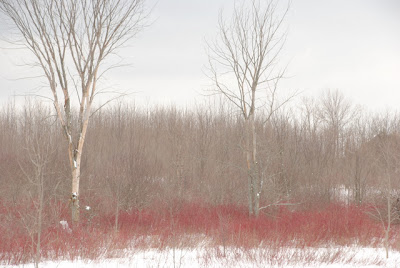 Down in the swamps, the red osier dogwood are turning a brighter red, and wherever they're found, the willows are turning yellow.  Even if there's deep snow still around, as there is, the dogwood and willows mark the changing season and bring the promise of warmer weather to come. 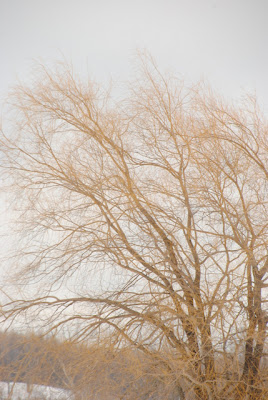 And finally the chickadees are calling, not their twittering winter calls, but their spring call to their mate, 'hambuuurrg'.  I've heard it occasionally for two weeks, but today every chickadee out there is imbued with the spirit of spring.
Posted by The Furry Gnome at 6:52 PM No comments: