Closing Down for Now - Thanks to Google!

Google has changed its format for Blogger, and no longer supports my computer's browser. I can't figure out the new format, which no longer fits on my computer screen. Frustrated as always by big corporations, software with no instructions, and computer technology, so I'm giving up. Good-bye for now; I may return in the future if I can figure it out.
Posted by The Furry Gnome at 3:04 PM No comments:

Well it's not that unusual to get a little snow in April, but it's nearly 20 inches now and still snowing steadily. Thirty hours ago flowers were out, leaves were emerging, we'd been working in the garden for weeks. And now it's all covered in a deep blanket of white. Snow tires are put away; snowblower is detached and stored - who knows when we'll even get out our driveway! 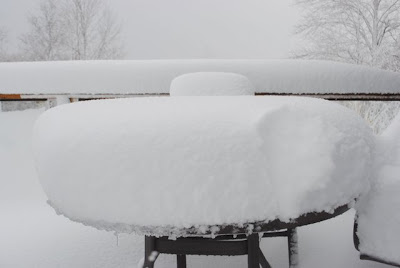 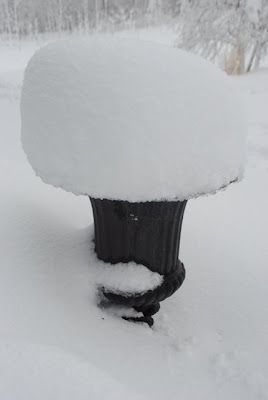 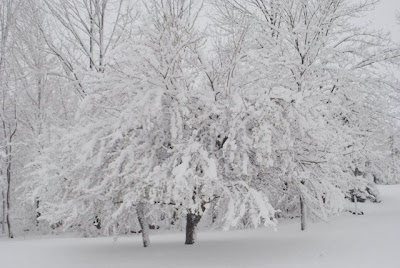 Posted by The Furry Gnome at 3:00 PM No comments:

Crows and a Raven

Lots of birds are around now, though on cold mornings they stay mostly quiet. The robins and mourning doves are nesting on or near the house, and I see or hear goldfinch, song sparrows, bluebirds, woodpeckers, flickers, and a drumming ruffed grouse on my walks around the neighbourhood. Sometimes a killdeer flies overhead, or a meadowlark calls from the distance. And there are almost always turkey vultures silently soaring overhead.

Yesterday for the first this year I heard both some chipping sparrows and a field sparrow (which I think of as the ping-pong bird, because its trill increases in speed as does a ping-pong ball when dropped on a table).

And the other day I watched two crows chasing and dive-bombing a raven. I never realized how much bigger the raven is compared to the crows. The pair of crows chased the raven low above the trees, but then the raven landed and perched in a tree only 50 feet away, so I had a really good look at them. The crows continued to dive near the raven, and after a few minutes it took wing and they all flew away.

The size comparison was striking when they were seen close together. The raven was nearly twice as big in bulk as the crows, perhaps half-way between the size of a crow and the size of a vulture. And of course the raven has a very different voice, much more of a hoarse croak compared to the crow's 'caw'.
Posted by The Furry Gnome at 9:27 AM No comments:

I can't believe the early spring flowers have bloomed and wilted so fast! In that extreme warm two weeks we had, the aconite, snowdrops and crocus all bloomed almost immediately, then wilted in the unusual heat before I even got a picture of them (they are adapted to cold early spring weather after all). Now the tiny dwarf iris, primrose and squill have equally had their moment in the sun and disappeared. It's disappointing, because these bright flowers in early spring normally stay around for a while, and are such a colourful harbinger of warmer days in the garden to come. 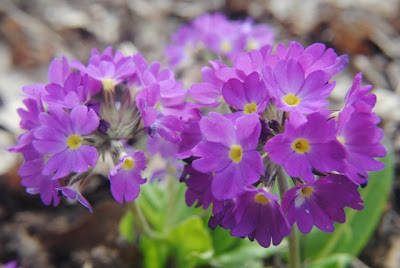 One of our favourites, a small primrose. These appear quite early with small clusters of pink, purple or bluish flowers, and bright green leaves. We have several of them along the front edge of the garden where they welcome spring. 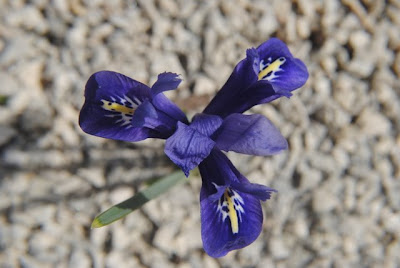 My own personal favourite is the dwarf iris, a tiny little flower that blooms before its leaves appear, standing only a few inches tall; we also have a few yellow ones. 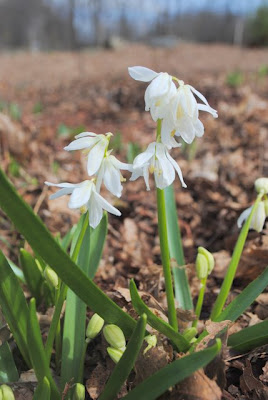 Finally, a new addition to our garden, a striped squill, perhaps an unusual flower to many, but a nice spring bulb that appears equally early in the garden.
Posted by The Furry Gnome at 10:15 AM No comments: