Dropped by Webwood Falls a few days ago, when it was in full spring flow, just roaring over the falls and down into the ravine below.  Obviously this was before all the snow had gone - seems to be a few days ago, but may have been nearly 3 weeks! 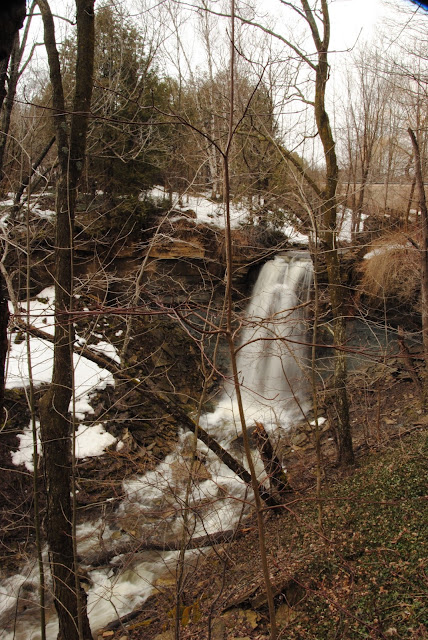 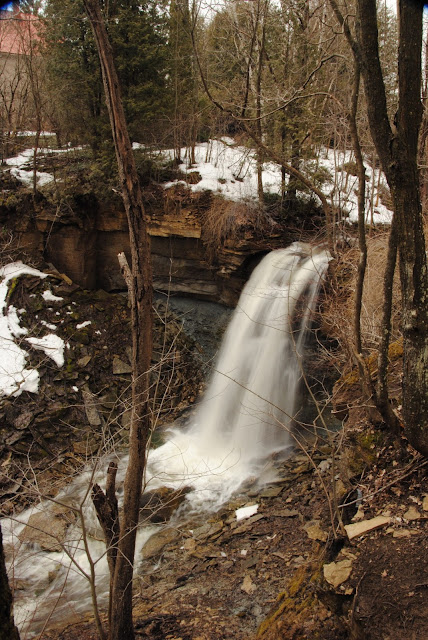 Posted by The Furry Gnome at 8:34 PM No comments:

Email ThisBlogThis!Share to TwitterShare to FacebookShare to Pinterest
Labels: Waterfalls

A group of us walked in to see the springs at Bill's Creek a few days ago, a property recently acquired by the Bruce Trail Conservancy.  These are the springs (in low water just one spring), which provide the outflow from the Wodehouse Karst sinkholes.  The sinkholes were completely flooded at this point, so the flow was tremendous - Bill's Creek was just charging down the ravine into the valley. 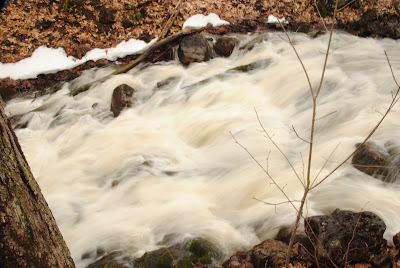 The creek was completely full, as you can see looking directly down on it, above, and to our east it continued downslope beginning to form the deep gorge in the Queenston Shale that occurs further downhill, before it bursts out to flow across pastures below into the Beaver River. 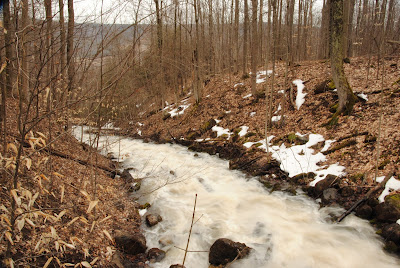 Above us, it was flowing out of all three springs, including the southerly one, the flow from which is shown in the photo below.  The Bruce Trail passes just above the springs, and then follows downslope on the north side, giving you great views (and a very noisy creek at the moment). 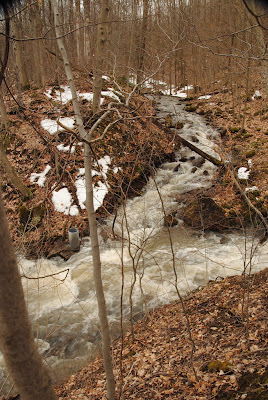 Below is the centre spring which provides the main flow most of the time.  Put together it was great to see it when it was charging full, and not just a late summer trickle. 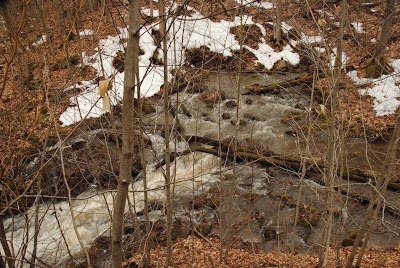 Posted by The Furry Gnome at 8:14 PM No comments:

We all look forward to spring at the end of a long winter, and the first signs of spring actually arriving are treasured.  For me there are a few species of flowers, both in the garden and in the wild, that are the heralds of early spring.  The first two of these are from gardens, one our own, and one a neighbour's. 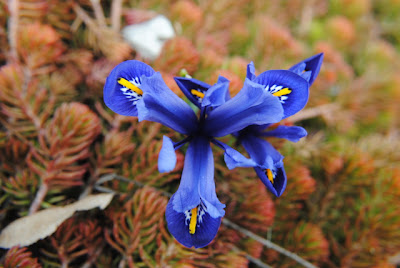 The first is a dwarf iris, only a few inches tall, and bright royal blue.  Below are aconite flowers, also very tiny, but bright.  Along with snowdrops, these are among the very first flowers out, sometimes blooming while there's still snow on the ground. 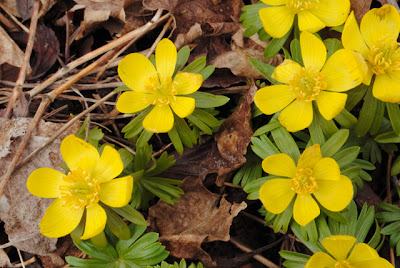 And below is a skunk cabbage.  I posted some pictures of these earlier in the month, but I went back and searched until I found one where the flower inside the curved protective covering was visible.  This one really does come up through the snow. 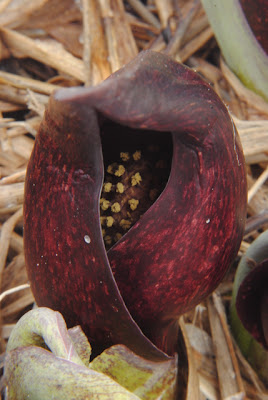 All of these pictures were taken before the ice storm of the last few days, so who knows how these little flowers are feeling now.  But we tend to forget that early spring flowers are actually adapted to frost and snow, and will usually survive without damage.
Posted by The Furry Gnome at 8:14 PM No comments:

I was over at the top of the Beaver Valley ski hills the other day; skiing was over, and the crews were starting to clean up for the season.  Standing at the top of Bowles Gully (home of the Avalanche ski run), I enjoyed the late winter view - only a little snow left other than on the ski runs themselves. 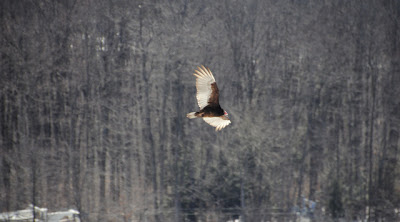 Then the vultures soared by far beneath me.   Silhouetted against the snow, three of them drifted back and forth, out of sight around the corner and then they'd reappear, drifting back into the steep hill.  They seemed to be sailing right into the hill itself. 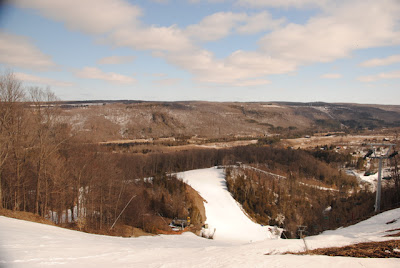 It wasn't a very warm day, and I don't think they were catching many updrafts; they were trapped in the deep, steep-sided valley, though for all I know they were enjoying themselves in the sun.  I zoomed in to try and catch a closer picture. 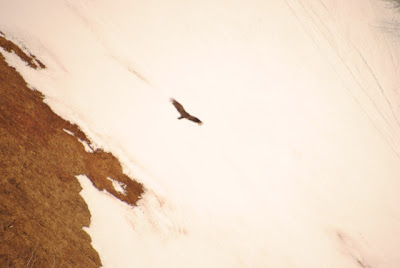 And there they were, three of them, sitting on the railing of the small observation deck half-way down the hill.  Dwarfed by the big new yellow snow-gun (it uses water more efficiently in making snow), they just sat on the railing in the sun. Look closely and you can see two of them in the centre of the picture.

I went back another day to try and get a better picture.  It was warmer, and this time there were obviously good updrafts. I got the first shot above, this time looking up at a vulture circling in the air over the valley in front of me. 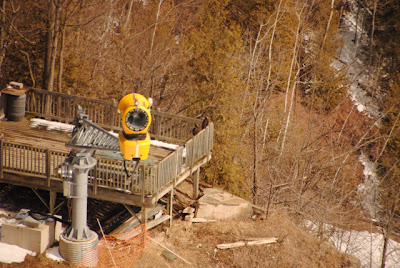 Posted by The Furry Gnome at 7:02 PM No comments:

Skunk Cabbage is in Bloom

Went out for a drive today when the sun was shining, and a beautiful blue sky.  Figured I'd get some nice photos of the valley.  But the best photos I got were actually down in the ditch - the skunk cabbage poking up through the snow.  These ones were on Sideroad 13 just around the corner from the 7th Line. 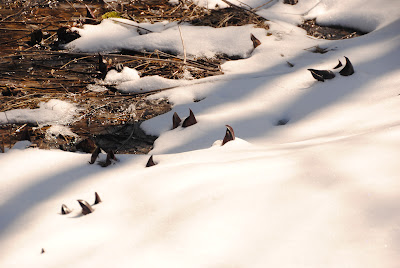 While we impatiently wait for spring, we tend to forget that some plants can handle a little snow just fine, thank you very much - just as some birds can.  Those robins, redwings, turkey vultures and grackles that have returned in the past week may be chilly, but they'll survive.  Skunk cabbage is actually adapted to poke up through the snow, the curved spike providing shelter and protection. 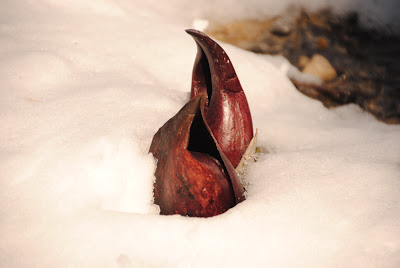 If you could look inside these almost closed reddish spikes that encase the flower, you would see a small yellow cylinder covered in florets, the skunk cabbage flower.  It must be the very first spring wildflower in this part of the country. The enclosing spike actually helps the flower by providing a tiny warmer micro-climate amidst the snow. 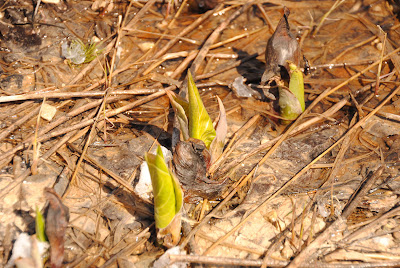 A foot away, where the snow has already melted, the yellowy-green leaves are already emerging as bright spikes.  They will turn into enormous wide green leaves a little like rhubarb or cabbage by the time the warm weather gets here.
Posted by The Furry Gnome at 8:23 PM No comments: