The Royal Botanic Garden at Edinburgh was actually the first Botanic Garden we visited.  At the end of our first trip to England, we drove north and flew home from Scotland.  We visited again in 2010.  This garden has given us some key ideas that we've used in our own garden here at home. 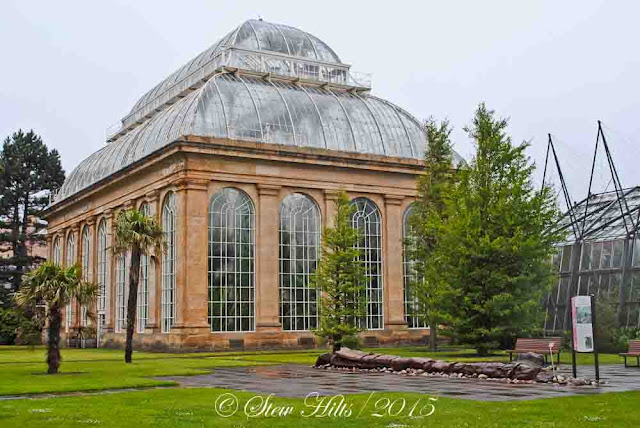 The Botanic Garden in Edinburgh is older than Kew, established here in 1670.  It has a reputation for the research on conservation of biodiversity carried out here.  This is the big Palm House, home for tropical plants. 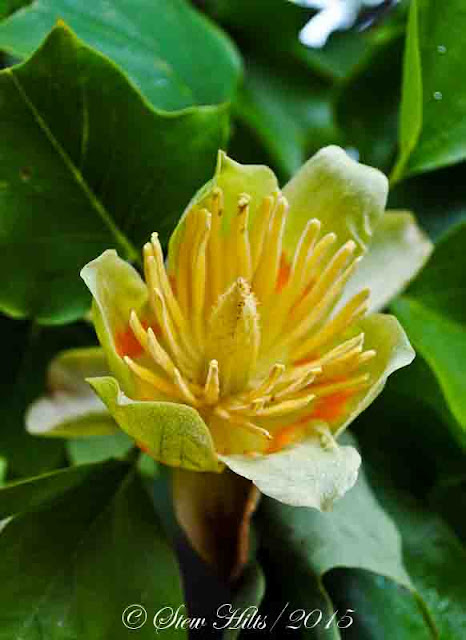 But it was out in the grounds that we really came to see.  The collection of big old trees is impressive, as it is at many older large gardens.  This is the flower of a Tulip Tree, introduced as an 'exotic tree' from North America in the 1600's! 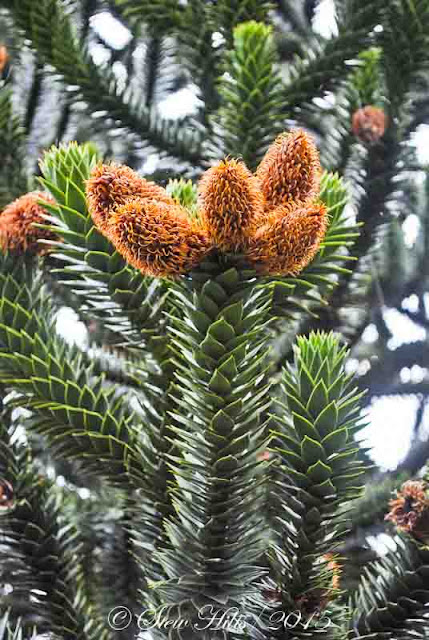 And this is another exotic tree, the Monkey Puzzle Tree from South America.  It really does look exotic! 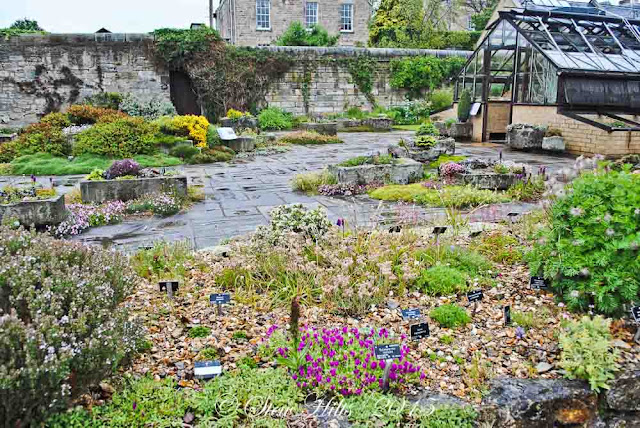 My favourite part was the Alpine Garden, a collection this botanic garden is noted for.  They can all stand the cold, collected from alpine habitats in mountains around the world, but they don't all like the rain.  The ones that would usually be protected by a blanket of snow in the winter are kept in the greenhouse here. 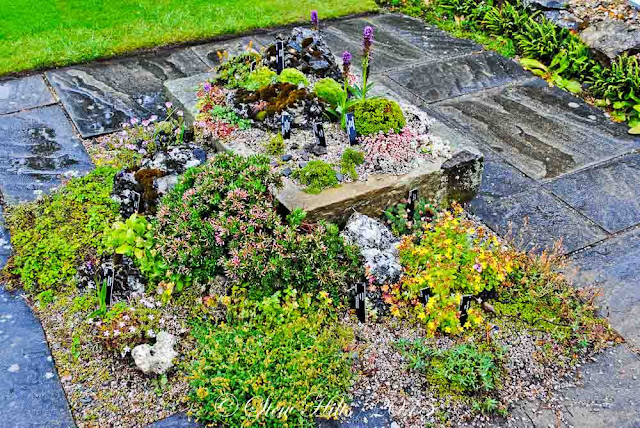 The alpine plants are also grown in troughs sitting around on this patio, a way of mimicking the soil conditions they usually grow in. 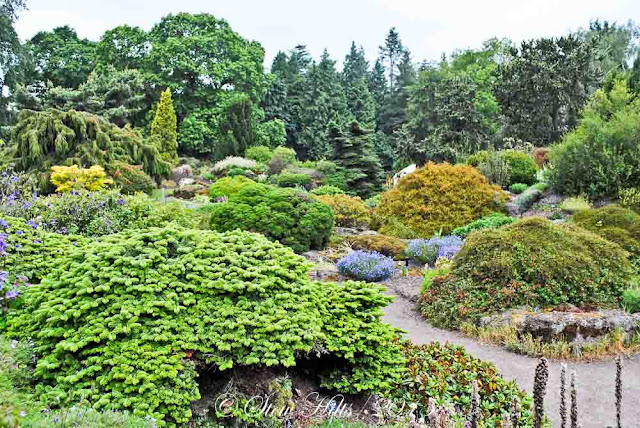 There's much more to Edinburgh's Botanic Garden than this though, and one of the other best features is the spectacular Rock Garden, built over hummocks and hollows, with numerous varieties of sprawling shrubs. Of course the day we were there it was raining .... 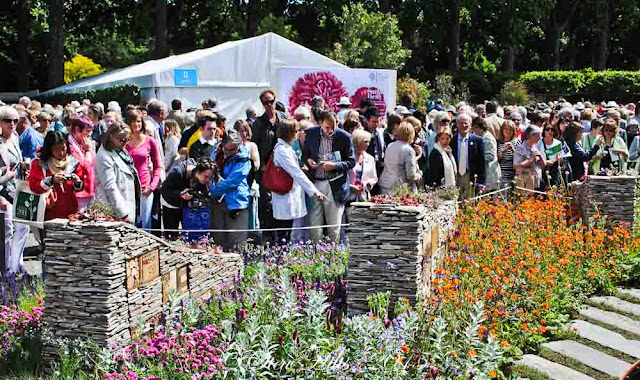 Modern day hunting for plants and garden ideas is epitomized in England by the Flower Shows, so I thought I'd add a few shots of these.  This is the Chelsea Flower Show, right in London, the largest and most prestigious.  As you can see, don't go if you're claustrophobic in crowds! 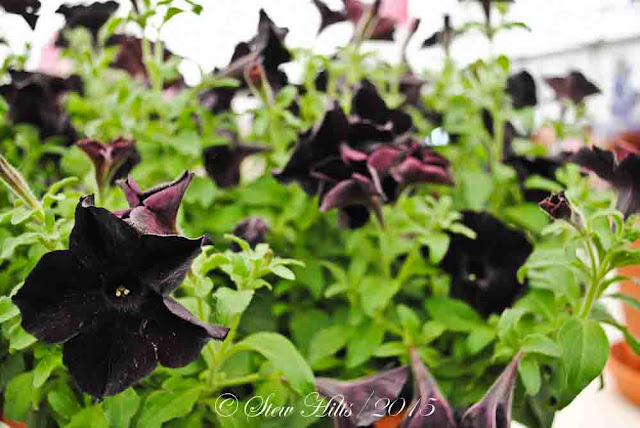 Half of the show is about new flower varieties.  This is the 'Black' Petunia that was all the rage when we were there in 2010, along with thousands of other flowers! 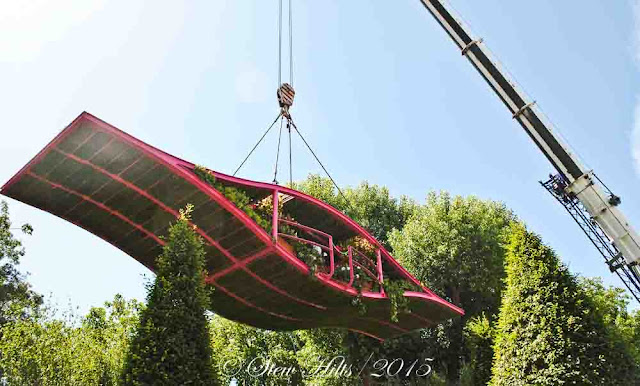 The other highlight consists of about a dozen invited garden designs, all required to have some sort of shelter with a place to eat lunch, for out in your backyard.  This was the most absurd of these that year, dependent on a huge crane sitting off to one side, to lift your 'lunch shelter' up in the sky.  It's all about publicity for the garden designers! 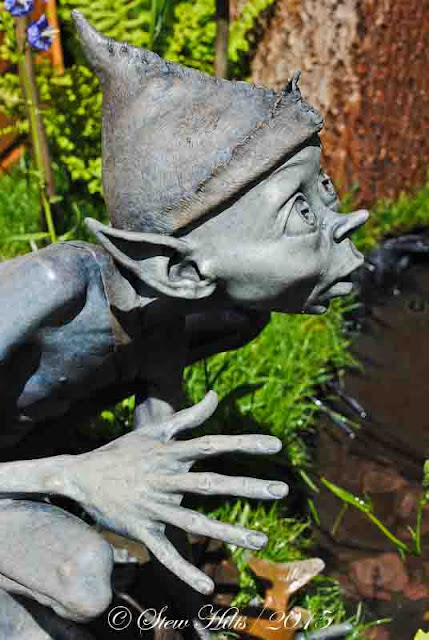 And it's increasingly commercial.  You could spend thousands of pounds on sculptures for your garden, just at one of the many vendors.  There are lots of ways to make your garden special by spending more money! 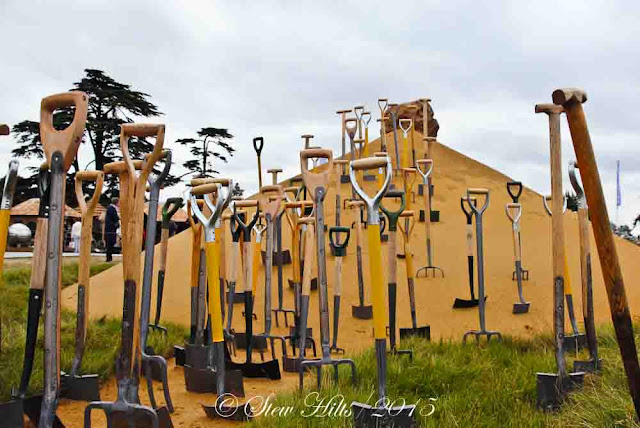 We also went to the Hampton Court Garden Show, in 2014.  It tends to have more avant garde garden designs, but don't ask me what the message of this collection of garden shovels and forks is! 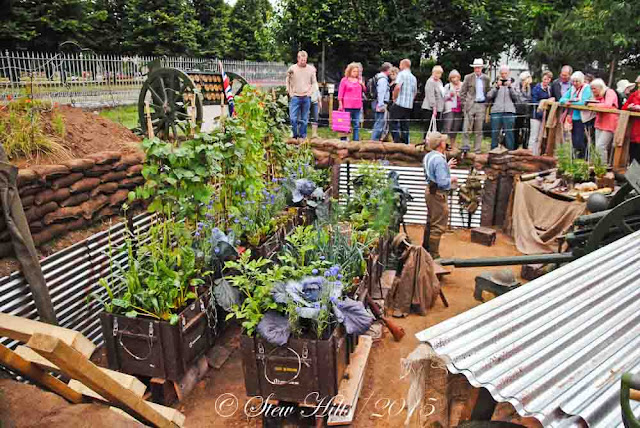 On the other hand I thought this garden was well done and quite educational in comparison.  That year was the 100th Anniversary of WWI starting, and this garden illustrated the veggies soldiers would try to grow in the trenches, complete with a soldier to answer your questions. 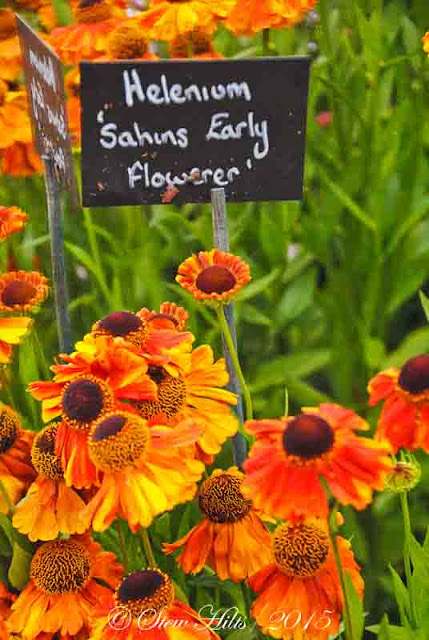 There's an enormous amount more to English Flower Shows.  It's just such a unique experience to visit one if you're interested in gardening.  This new variety shown at Hampton Court is a type of Helenium, one of my favourite flowers here in our own garden.

Next weekend, more English Gardens.  And in the meantime, here in southern Ontario, we're supposed to get snow which will take us back into winter over the next few days.  Yeah!