I finished off my six week Life Long Learning Series on Tuesday, sharing photos and stories of our five favourite gardens.  Today we'll visit, Sezincote, Hestercombe, and part of Monet's garden at Giverny in France; tomorrow the rest of Monet's garden, Hidcote and Sissinghurst. 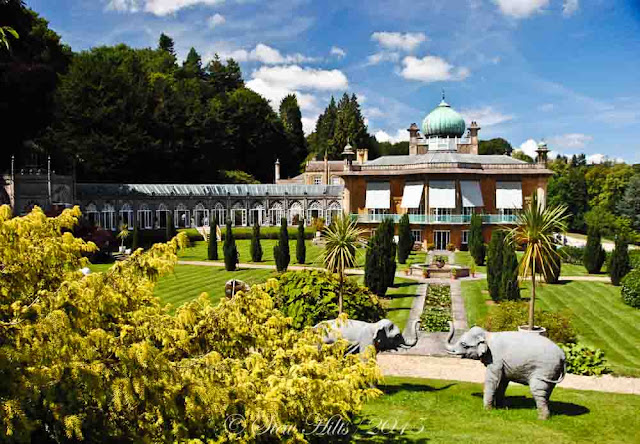 Sezincote, a private home in the English Cotswolds, is simply one of the most remarkable rural places we've come across.  Built 200 years ago by a family who served with the British Empire in India, this house has been described as the best example of Mughal architecture in Western Europe!  The garden above (between the model elephants and the house, is a very simple '4-square' Persian garden with paths, upright Junipers, and a water feature. 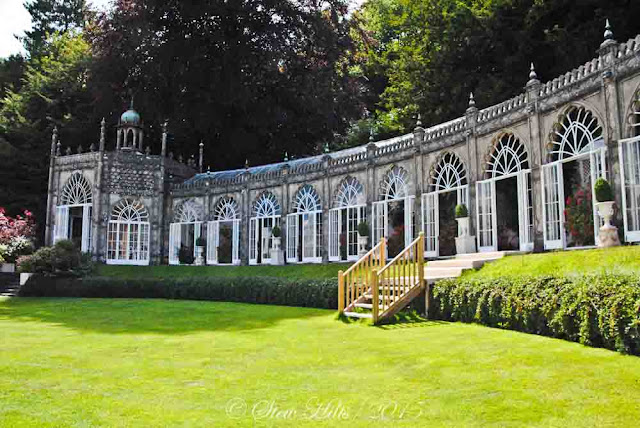 The curving orangery is absolutely stunning, and it's now the tea room, so you get to take a close look.  All the little details of the architecture remind you of India.  The fan-shaped arched windows are a specific feature of Mughal architecture. 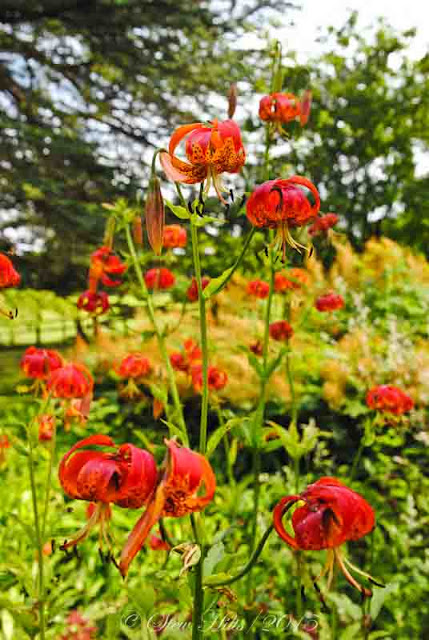 Elsewhere, there are flowers, like these very bright red lilies, in a beautiful little stream garden that cascades down a slope beside the pasture. 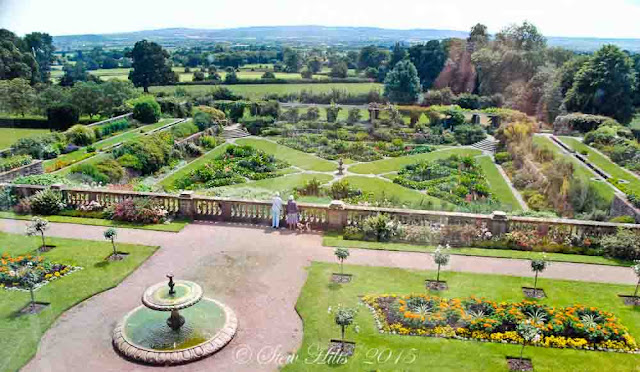 Hestercombe is equally remarkable, but here it's this garden rather than the house that stands out.  This was designed by the famous English architect Edwin Luytens, and the plantings were done by the equally famous garden designer and writer, Gertrude Jekyll. 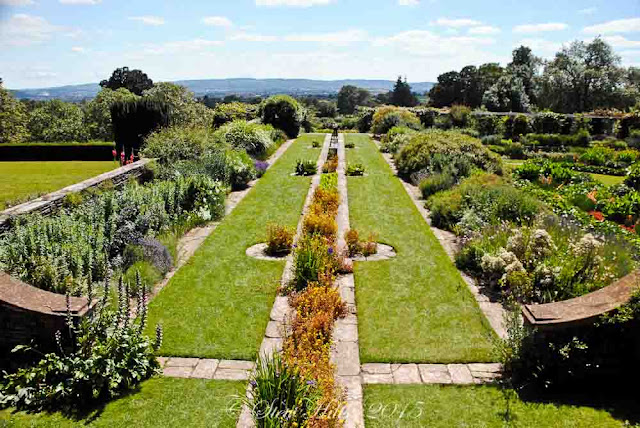 This is one of two rills, a narrow stone channel with a tiny stream in it, bordered by the luxuriant plantings on either side.  Gertrude Jekyll was perhaps the most influential English garden writer of all time, as she not only designed 400 gardens, and wrote 12 gardening books, she also wrote over 1000 practical articles. 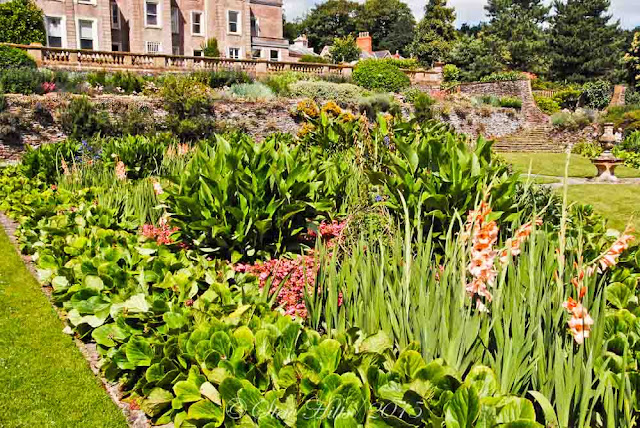 And these are some of the plantings, backed by one of Luytens' stone walls.  As the undergardener I'm always looking at the actual structure of the gardens we visit.  This one is outstanding because it has both a formal architectural framework, and more natural luxuriant plantings of flowers, a great combination! 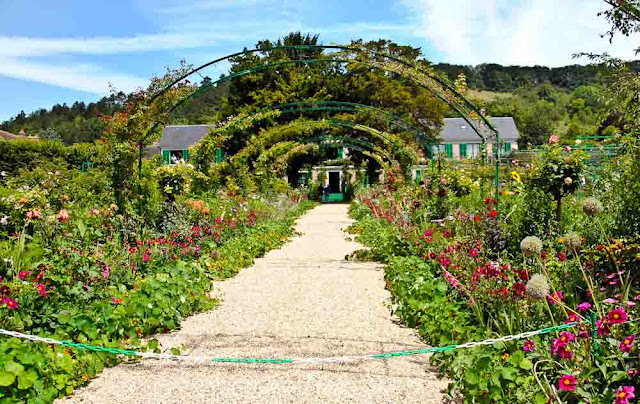 And finally, Monet's garden at Giverny.  This is the first part of the garden he built, extending south from his house, and providing a rampant mix of colour for his paintings.  That's the house in the background, which is also open to visit. 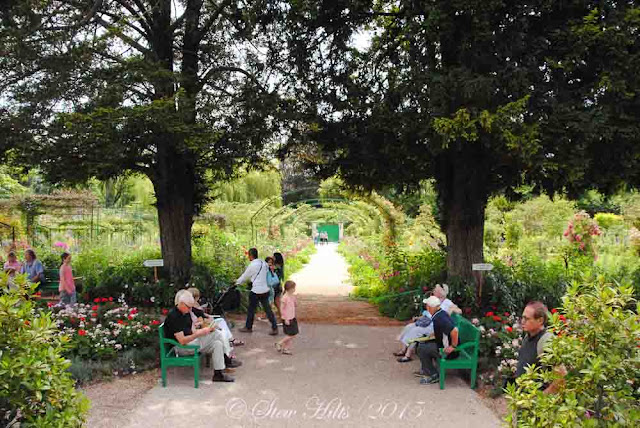 And this is the view from the front steps of the house.  Imagine coming out your front door to welcome the day with a huge colourful garden like this to greet you!  (And several gardeners to do the work). 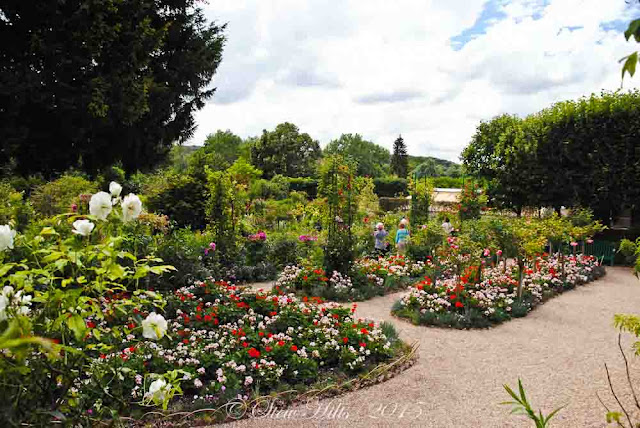 Just one small corner of Monet's flower garden, with mixed red and light mauve Geraniums.  Monet is actually better known for the other part of his garden, the water lily garden, as well as his water lily paintings (one of which recently sold for $88 million! - he ranks #3 among artists for recent sale values).  But that will have to wait for tomorrow, along with Hidcote and Sissinghurst.

Mild and melting again here today, as the winter thermometer bounces up and down like a yo-yo!