Tonight, two great 20th Century gardens, one in Scotland, and one in the Cotswolds of England.  Hope you enjoy them.  Crathes Castle, the first one, is located in the southern Highlands of Scotland, west of Aberdeen, and east of Balmoral Castle. 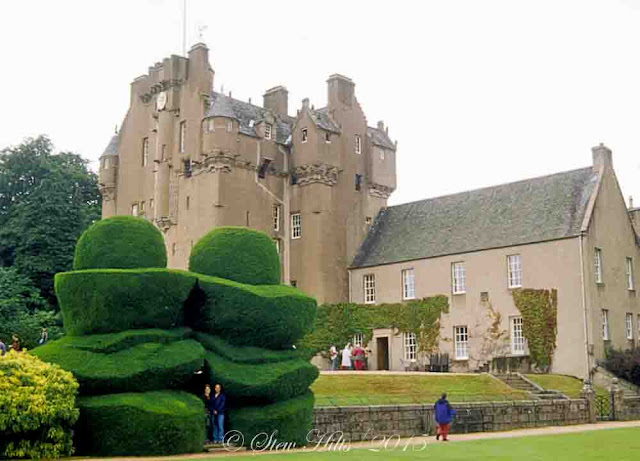 This is Crathes Castle itself, a remarkably well preserved castle from the late 1500's.  It's open for touring as well as the garden, and it's worth it.  Original painted wooden ceilings, tapestries, and period furniture, all the things that made this a family home in the years of Mary Queen of Scots.  The addition to the original tower house on the right was added in the early 1700's when one lady of the house had 21 children in 22 years!  I'll leave you to contemplate that! 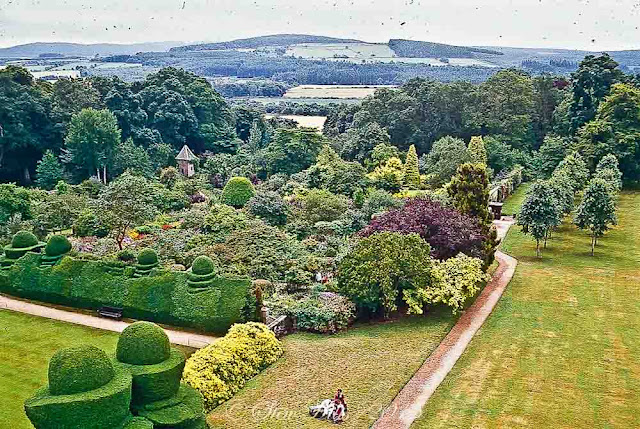 Because there's a tower castle right there, you can look down on the garden from above.  It's a huge walled garden, now given over mostly to flowers.  Although parts of this are old (the Yews were planted in 1702), the flower plantings were designed by Lady Sybil Burnett during the 1920's and 30's, so are fairly modern - and striking! 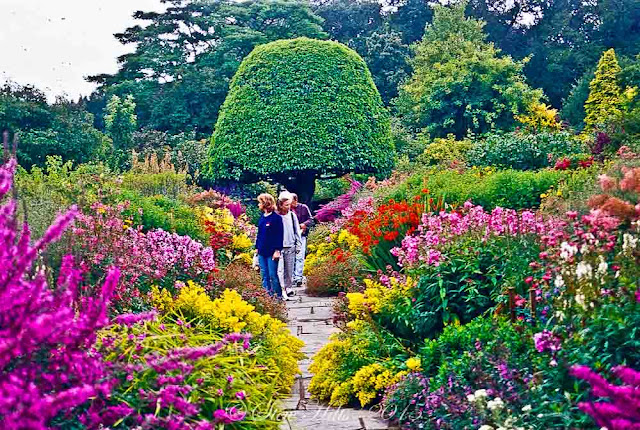 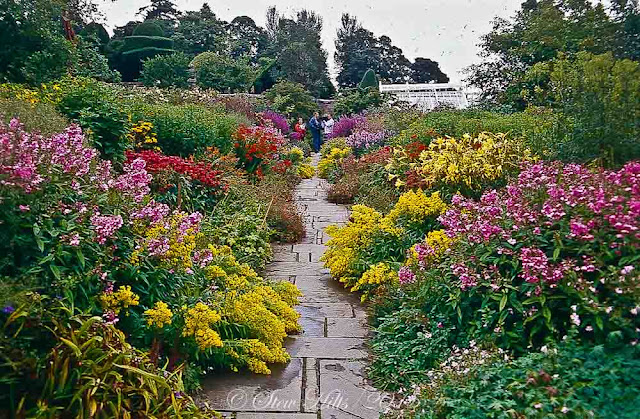 She loved colour, and it shows in the garden! 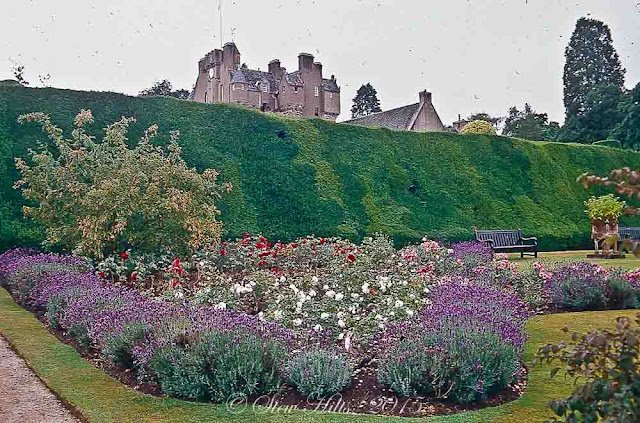 A nice combination of Roses bordered with Lavender in bloom here, and the top of the castle visible over the enormous Yew hedge.  We have to remind ourselves when we visit a garden like this that we don't have a staff of 8 gardeners at home! 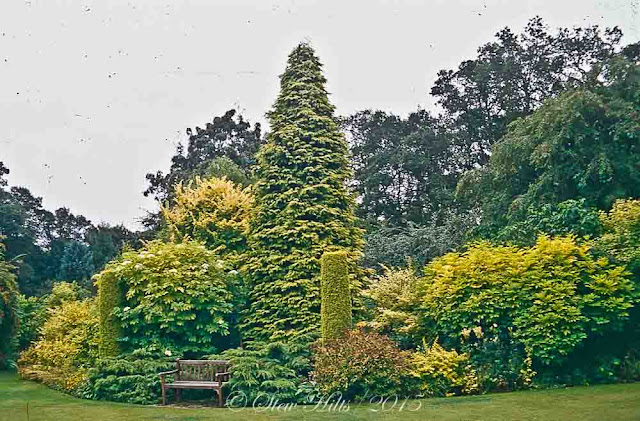 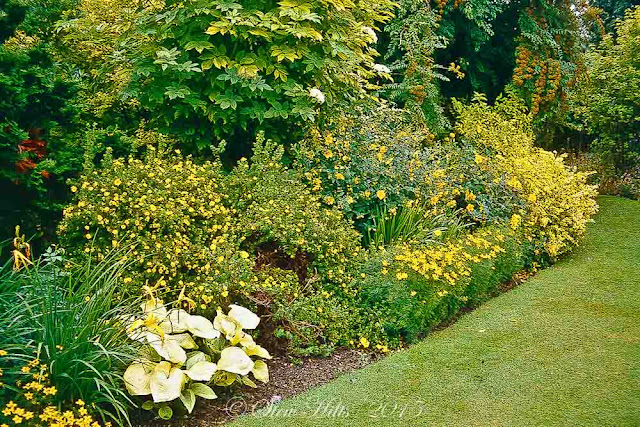 And this is the only garden where we've seen a 'Gold Room', a corner of the garden planted entirely in shrubs and flowers with various shades of yellow foliage or blooms. 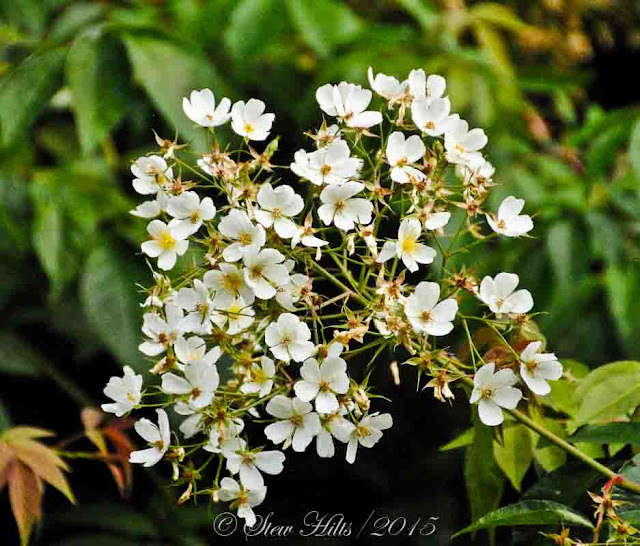 The Kiftsgate Rose - the Kiftsgate garden has its own famous rose variety, an enormous sprawling rose bush, with quite small individual white blooms.  It's shade-tolerant (unusual for roses), and was planted in the 1930's 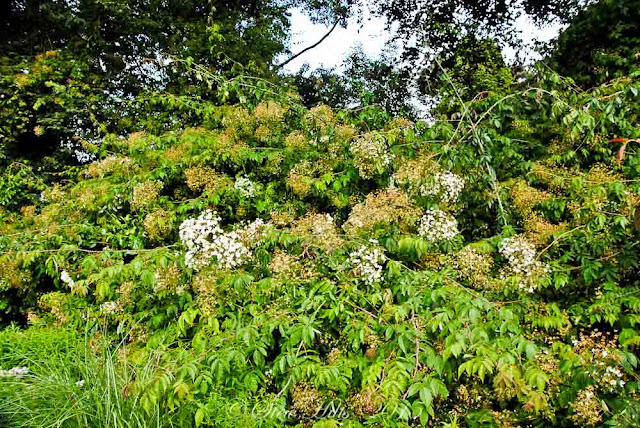 The blooms were just over when we were there; just a few clusters still held their white colour.  The rose bush is 80 or 90 feet long and wide and 50 feet high, crawling up through the trees.  They claim it's the largest rose bush in England, and this is just a small corner of it. 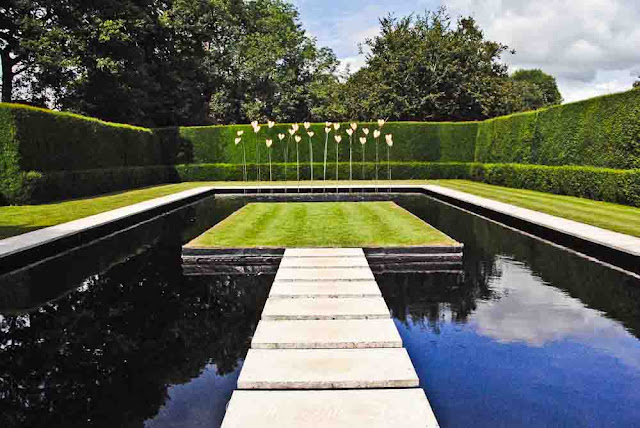 But the striking feature of Kiftsgate is this ultra modern water feature, a reflecting pool, with water dripping down each of those standing bronze leaves at the far end - built in the former tennis court.  Although all the other gardens I've described over the past 5 weekends were created by men, both of these gardens were created by women, who took over the leadership of gardening design (and writing about it) in the 20th Century.  Here at Kiftsgate, three generations of women have created and maintained this garden.