It was another of those dull days, but I did get out once this year on the Beaver Valley Nordic Ski Trails, perhaps two weeks ago, before the thaw.  The club has done a lot of work this year to open more trails, and add a signage system.  So even though the trails were late opening in January, I think it's a big improvement. 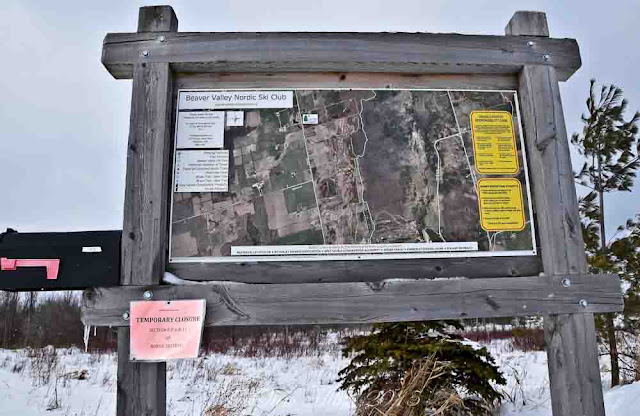 It started out with a big new sign, with a proper air-photo-based map of the trails.  I always love this sort of map.  The mail box is for leaving your registration if you're not a member. 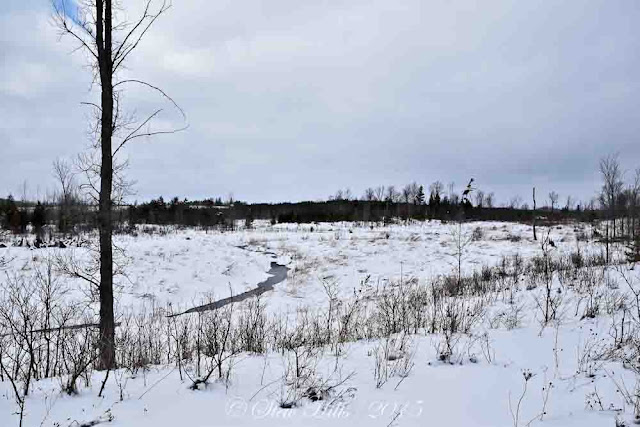 I headed north along the main entry trail, through the weedy meadow on the east side of Lower Wodehouse Creek. 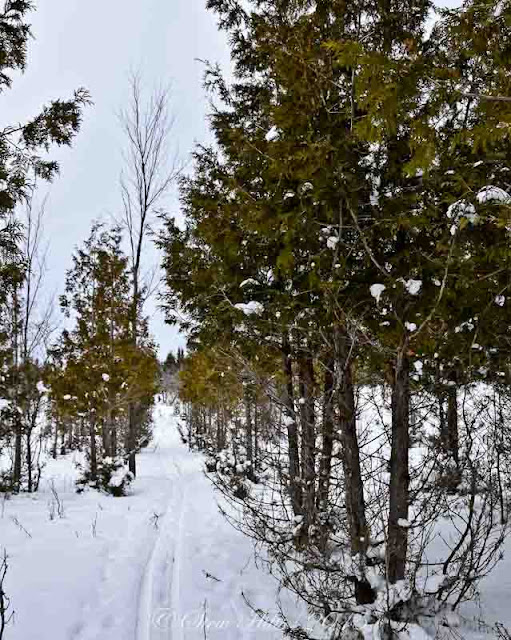 And as soon as I could I veered off onto the new trails I hadn't skied before.  Here the trail goes through a patch of Eastern White Cedar planted in rows, that have been really struggling due to the deer predation.  All the lower cedar leaves had been stripped off. 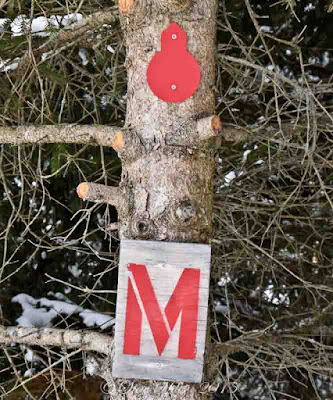 They've adopted a proper signage system for the trails by labelling each trail junction with a letter.  This is the easiest system I've seen for making sure you don't turn the wrong way! 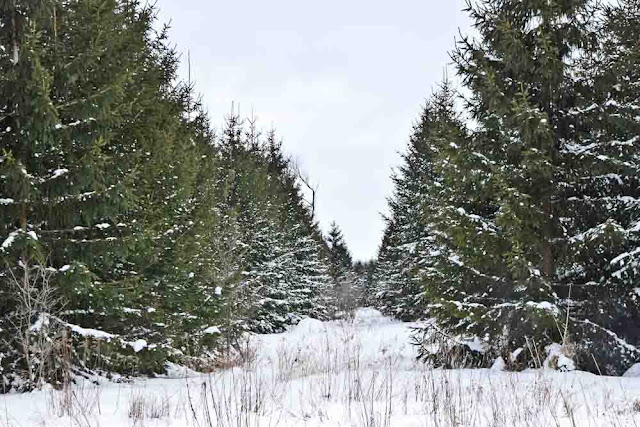 Then I reached the new loop on the far side of the creek.  This is a White Spruce plantation about 30 years old, and growing very well.  But there are gaps where the ski trails can easily run, and it's sheltered from the wind.  I was glad to try a new part of the area I'd never been in before - this is all part of Kimberley Forest. 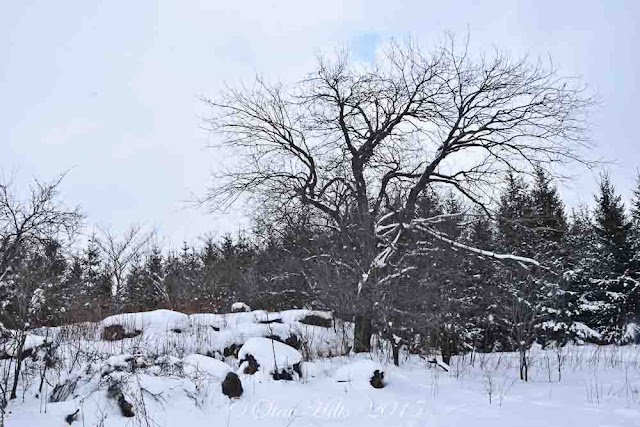 The most interesting sights to me were several spots where there were mature old deciduous trees, and a few extra big boulders.  This tree looked like an Apple tree to me, and that pile of rocks looked like it might be the remains of an old barn foundation under the snow. 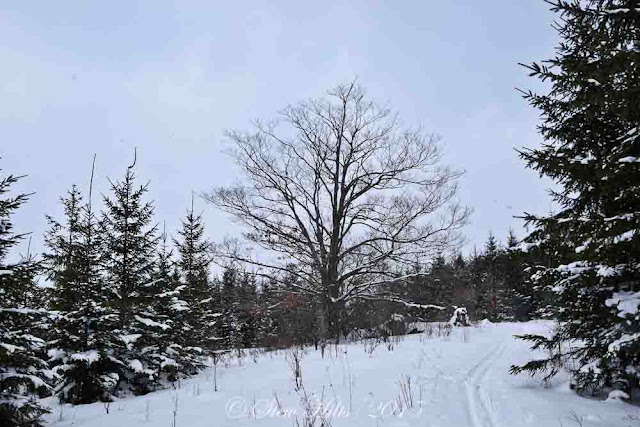 Another clearing with a big old Sugar Maple.  I'm definitely going back to investigate in the summer, to see if there's evidence of an old homestead in here hiding among the spruce. 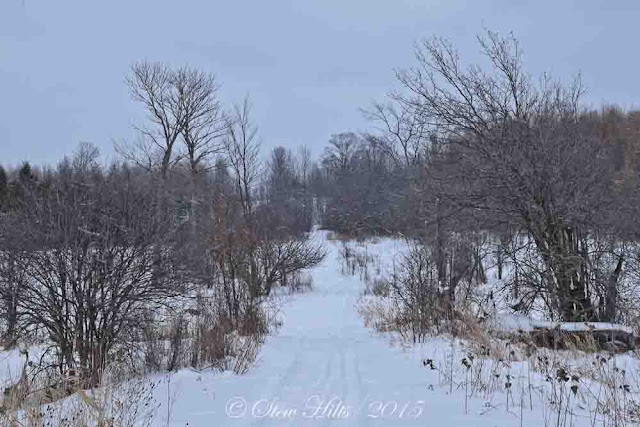 It was a long ski, nearly two hours, and I plodded along very slowly, but I enjoyed it.  Skied back down the old concession road and left for home, glad to have explored a new part of the trails I'd never seen before. 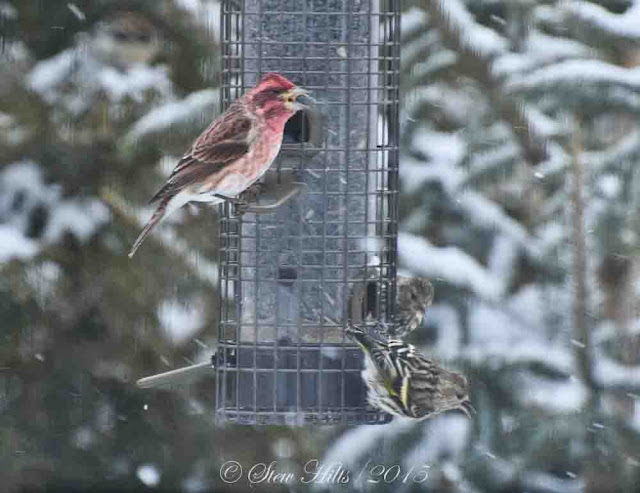 Yesterday I labelled this pinkish bird a House Finch, but Woody in his comments suggested it was a Purple Finch, a more unusual sighting for our area.  Unlike the former species, the pinkish/red on a Purple Finch extends down through the feathers on the back and on the breast.

And as if that was not enough, he pointed out that the bird on the lower right is a Pine Siskin - mostly brown striped, but with a hint of yellow on the wings and the tail.  David, in his comments, even suggested I keep my eyes out for this species; I guess I've already seen it.  I so appreciate it when comments help me learn something new!  And I've got the bird guide and binoculars out waiting!  Now, if I could just learn to take crystal-sharp pictures of the birds!