Today, in my final post on gardens this winter, I'm going to share pictures of our last three favourite gardens among all those we have visited.  These include Monet's famous water lily garden, Hidcote created by Lawrence Johnston, and Sissinghurst, created by Vita Sackville-West and Harold Nicholson. 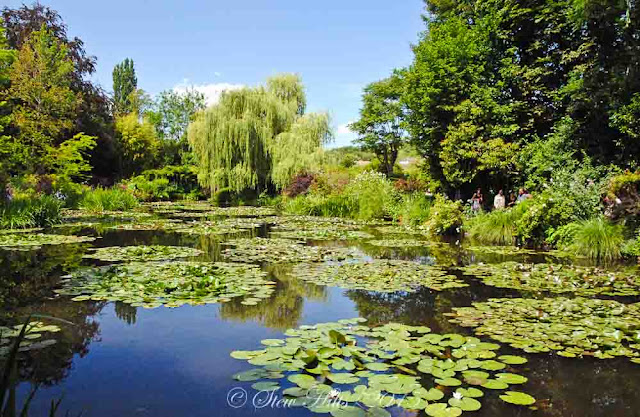 By 1890, Monet was earning enough from his paintings at the age of 50 to buy additional land along a stream across the road, and create a large water lily pond.  This was several years in the making, but then became a focus of Monet's art for the last 25 years of his life. 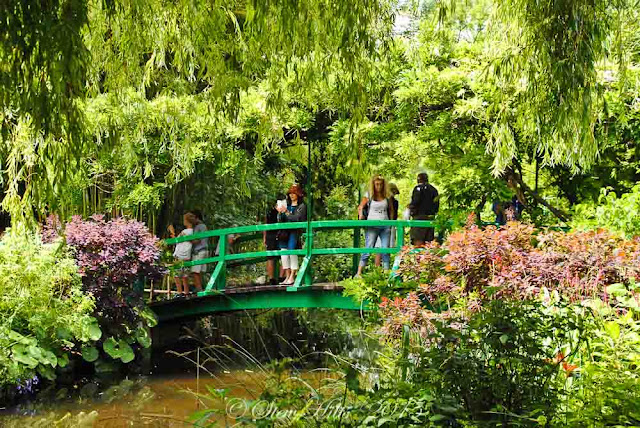 This is one of two small 'Japanese' style bridges over the stream at each end of the pond, one of Monet's classic scenes.  He painted this numerous times, in all different seasons.  Google 'Monet', and choose 'Images' and you'll see many of his paintings.  It is of course impossible to get a picture of this bridge without people, or even with just the one person you'd like to get a picture of on it! 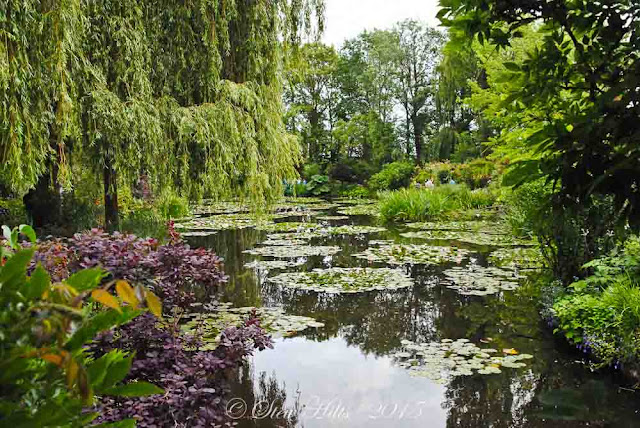 Monet painted about 250 water lily paintings altogether, right here in the water lily garden.  But his biggest effort for the last few years of his life was painting 8 enormous panels of water lilies, each 30 - 50 feet long, and 6 feet high.  They are displayed in the Orangerie in Paris, in two oval rooms especially built by the French government.  They were Monet's final gift to his country.
. 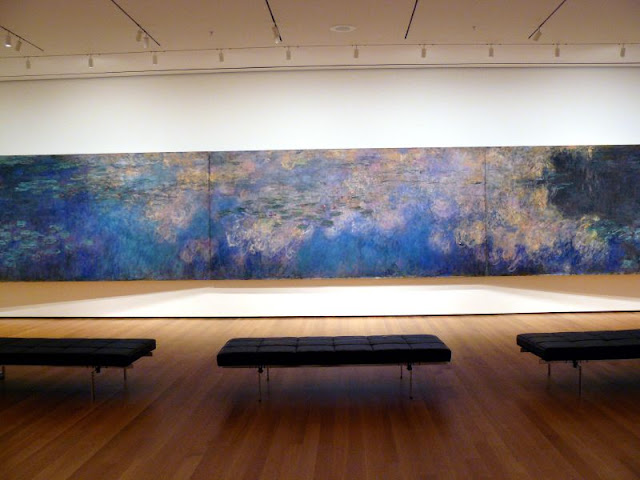 And this is the best image I've been able to find that would give you a small sense of what these enormous paintings are like to experience.  Seeing these paintings one day and then seeing the actual water lily garden the next was one of the most memorable experiences we've ever had while visiting gardens! 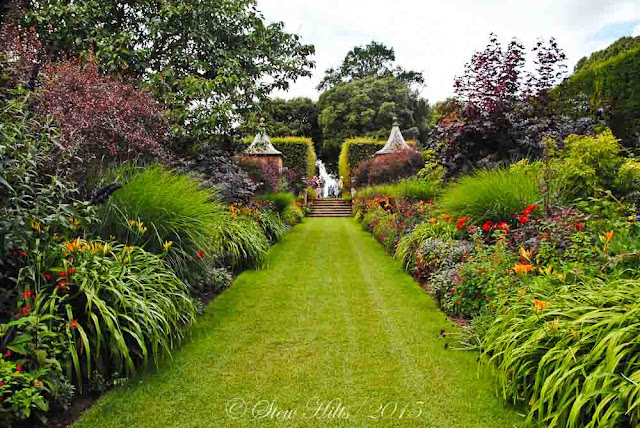 Hidcote is a famous garden known for being divided into numerous 'rooms'.  It was created early in the last century by an ex-pat American, Lawrence Johnston, living in England.  It's also a garden of vistas, and these are the famous red borders in the centre of one very long straight path. 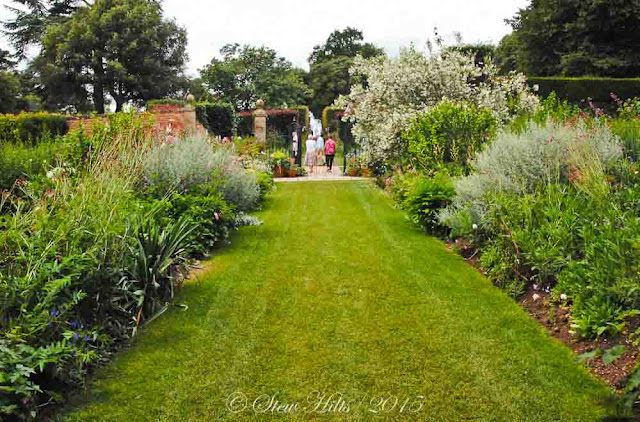 This vista looks even further, all the way past those red borders, through a gate, and out into the Cotswold countryside where sheep are grazing next door. 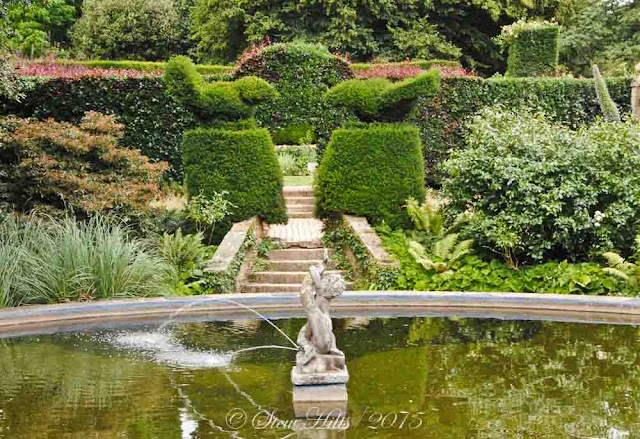 Another well known view at Hidcote is a shorter series of rooms including the reflecting pool and two famous topiary 'peacocks'.  They get pruned in spring and fall, so they're looking a little shaggy in mid-July. 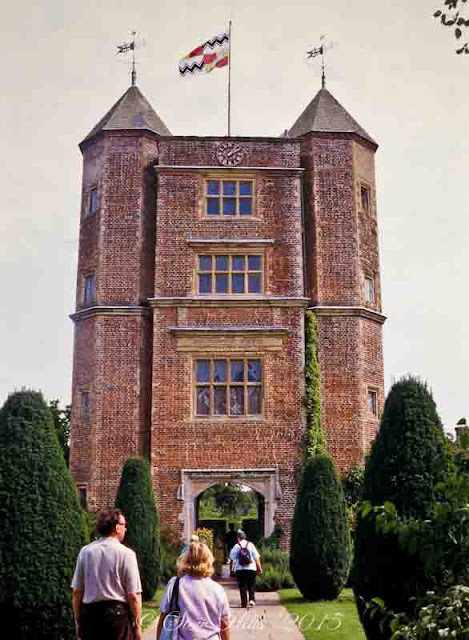 The final garden is perhaps England's most popular garden, Sissinghurst.  We probably know more about the making of this garden than any other garden, because Vita and Harold were both writers, and Vita wrote a gardening column in the Observer for years.  Not only that, but both their son and their grandson have written books about their experience growing up there.  Try to imagine 10 years old boys racing their bicycles around the paths in this garden! 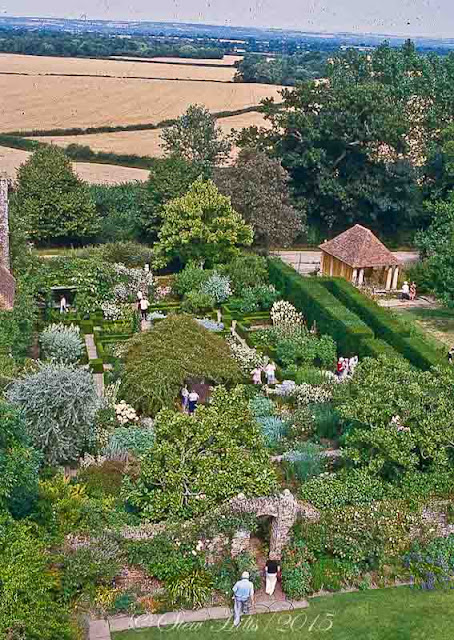 The unique thing about it (besides Vita and Harold themselves), is Vita's tower, where she had her writing room.  The garden was actually built in an old partly ruined castle.  They lived in one old building, ate in another, and slept in another - quite the 'house'.  But because of this tower, you can look down on the garden from above, a view you rarely get in gardens. 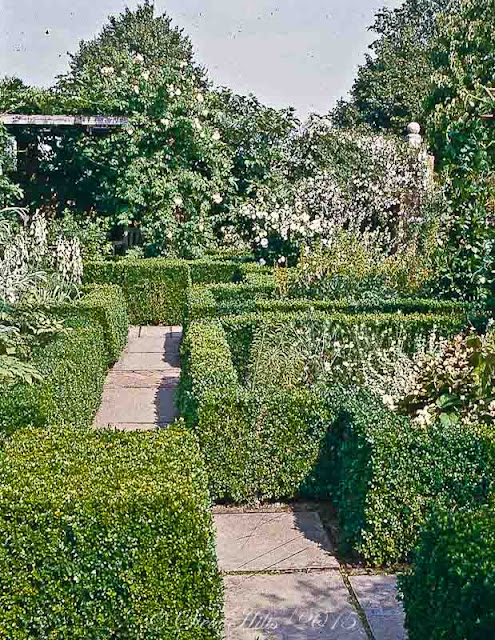 And both of these final views are of the white garden that Vita created in one part of Sissinghurst, an idea that has been repeated over and over again in gardens around the world.

Although we started out with just an interest in travel, horticulture and photography, we've ended up having wonderful experiences in gardens from Scotland to Spain and Italy.  The tea rooms are always a highlight after we've toured the gardens.  Thanks for coming along these six weeks, when pictures of gardens can balance the cold and snow outside!
Posted by The Furry Gnome at 7:22 PM