I'm going to devote the next week or two to posts describing Kimberley Forest and Wodehouse Creek.  This area is just a mile or two away from our home, and I've been intending to write an article on it for a long time.  Describing it here will force me to get my act together, find all the photos I have, and do at least a little writing!

Kimberley Forest is that stretch of the Beaver Valley that occupies the west slope, running from the Beaver Valley Ski Club (visible as a band of green down the hill on the far left), to the village of Kimberley, in the lower right.  This great view is taken from the top of the Old Baldy cliffs on the other side of the valley. 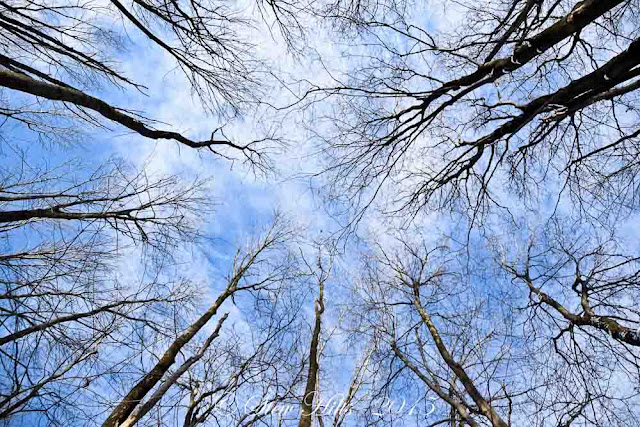 The entire west slope, as well as the flat land at the bottom on the far side of the river, and the flat land above the slope, is public land.  It was acquired in the mid-1960's as a potential downhill ski slope, but has never been developed, or for that matter, actively managed, in the years since. 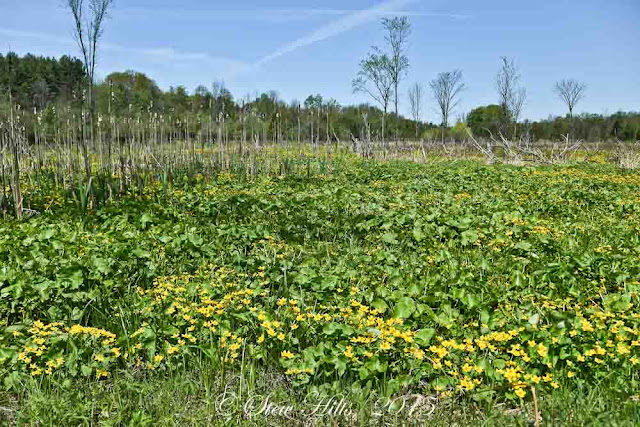 The lower part of the property by the river is flat flood plain, here marked by Marsh Marigolds in late May.  Altogether, it's nearly 900 acres, and in addition, there is a 50 acre parcel where the Wodehouse Karst sinkholes are located, and a further 50 acres or so owned by the Bruce Trail, where the main Karst springs emerge. 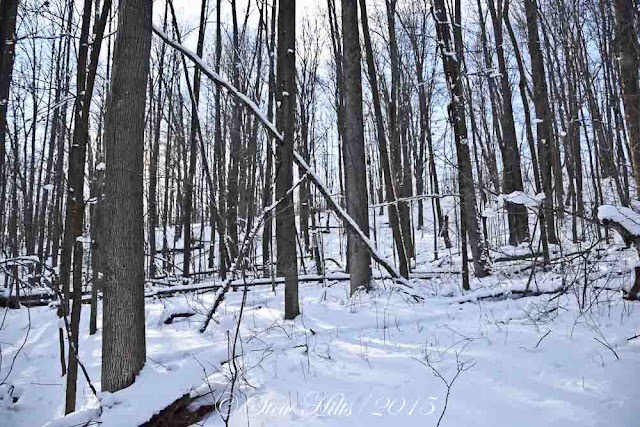 The forest on the slope is quite beautiful, mainly a hardwood Sugar Maple forest, and fairly mature.  In gathering these photos, the first thing I've realized is that I can't find any pictures of the forest in summer!  This was in early January a few weeks ago. 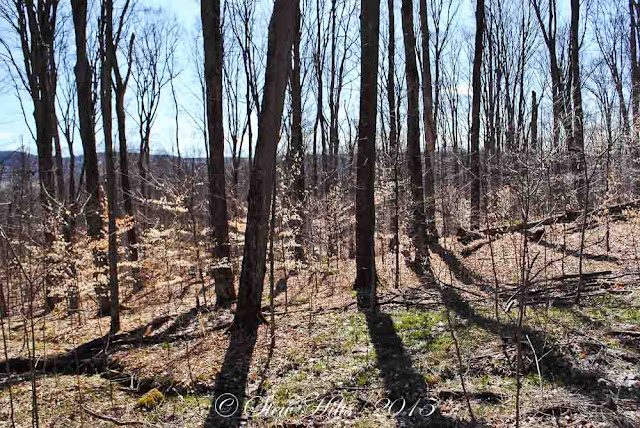 And this was in early spring.   This forest is riddled with trails for various uses.  The Bruce Trail runs through here, and there are cross-country ski trails on top of the slope.  There is a well-used snowshoe trail, and you find ATVs, horse-back riders, and mountain bikers using the trails. 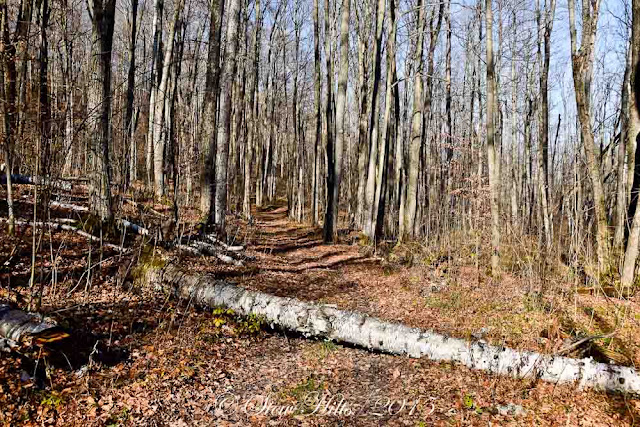 This is the main snowmobile trail which passes through the property, an old tractor trail from the time when the land consisted of several farms.  As you can imagine, there are potential conflicts among some of the trail users; more about that tomorrow. 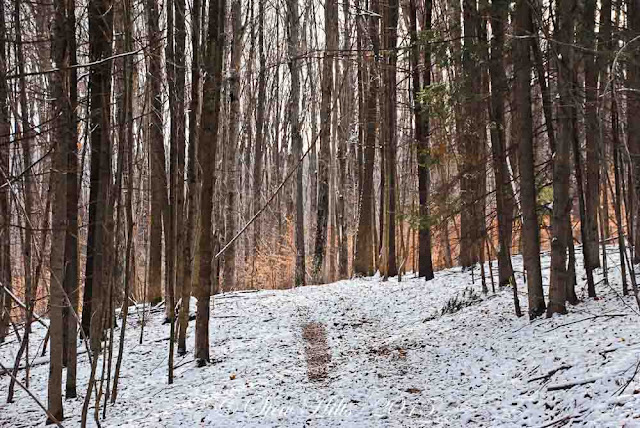 A number of these trails started in the 1970's as cross-country ski trails through the forest.  Some have become heavily used since, but some have nearly disappeared.  Here the dark tree trunks give away the fact that we're in a pine plantation. 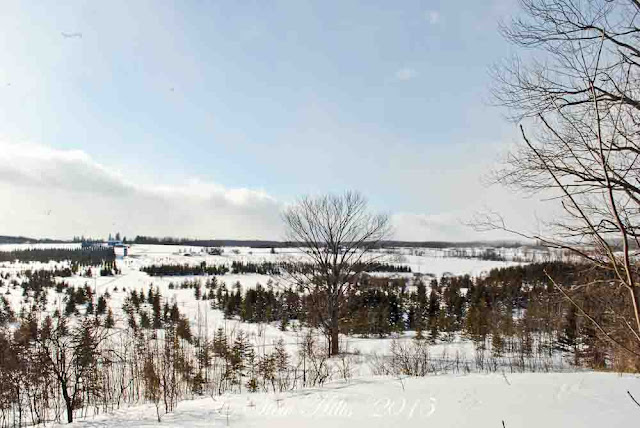 The land on top of the slope extends out to the next road, the 7th Line, in the distance on this photo.  Previously this land was farmed, and you may be able to pick out an old silo close to the left hand side of this photo.  The barn has long since fallen down, and as you can see, substantial areas were reforested, though the trees are still fairly young. 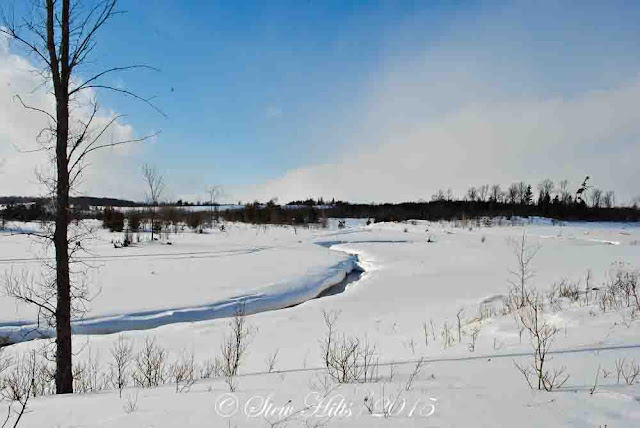 And through the middle of that part of the property drains Wodehouse Creek, forming some of the most interesting karst features in Canada.  That part of the story is going to be the most interesting.  Because a new trail in to see the karst is being developed this summer, I want to have all the information ready, and eventually I might even like to write a short book.

This story is going to take a while to tell you, but that will have to do for an introduction.  I should tell you upfront that I'm the local Chairperson of a group called the Friends of Kimberley Forest, so I have a vested interest in people knowng about this property, and the information I prepare here will undoubtedly get used elsewhere.

In trying to write these posts, the major challenge I face is trying to find the photos I want to use.  I have about 75,000 photos on my computer plus external hard drives, and it's taking me a long time to sort through, review them, and find the photos I want.  Luckily I'm not totally disorganized in the first place.  The other benefit to me will be that it will tell me what pictures I am missing, or what season I'm missing photos from, and I can plan some walks this summer to get specific pictures I want.  As I said above, I've already realized that I have very few summer pictures.  Hope you enjoy following along for the next week or two (with an interruption for more garden posts on the weekend).