On Saturday three of us headed up to Sauble Beach, to the Sauble Cross Country Ski Club trails, which run through forested dunes behind the beach near Sauble Falls Provincial Park.  The conditions the day before were poor, after another warm day, but overnight the temperature had dropped and there had been a fresh 2" of snow - we lucked out! 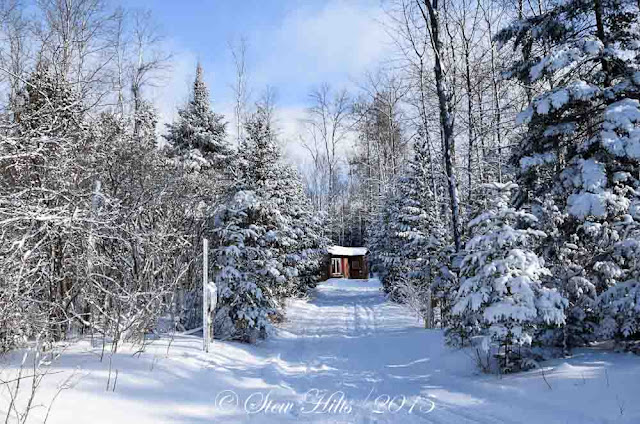 This club even has a little warming hut where volunteers serve warm cider on weekends.  Quite the operation!  And it has excellent trail maps. 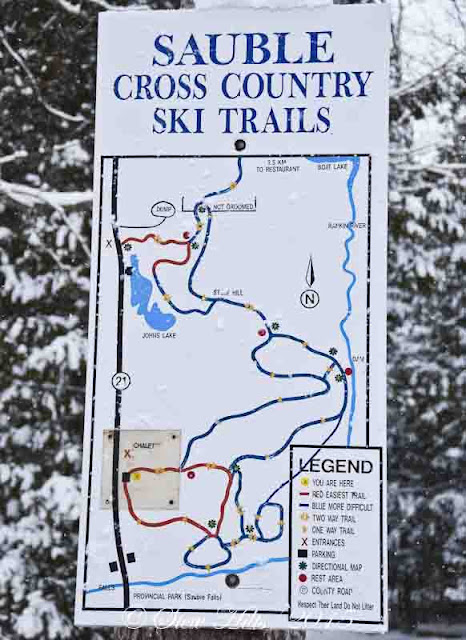 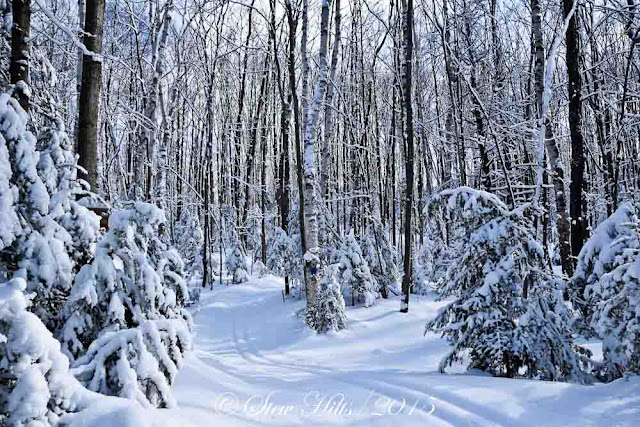 We pondered the trail map for some time before deciding what loop to try, and ended up on a longer loop in to the Rankin River.  The trail sort of bounces up and down over the old dunes all the way. 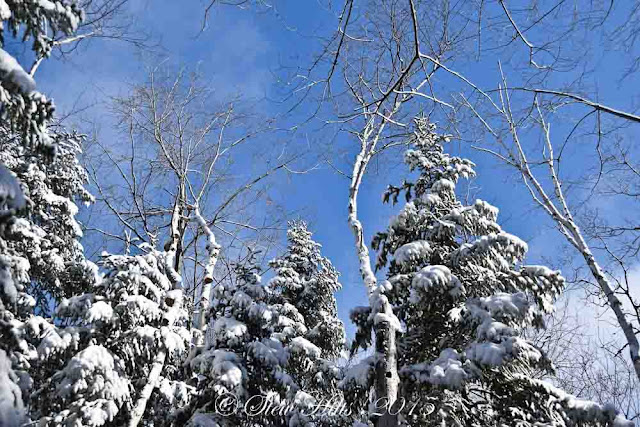 The forest here is mostly hardwoods overhead, but a lot of young Hemlock in the understory, which hold the fresh snow beautifully.  And for the first hour or so, the sun was shining most of the time.  Couldn't have been better! 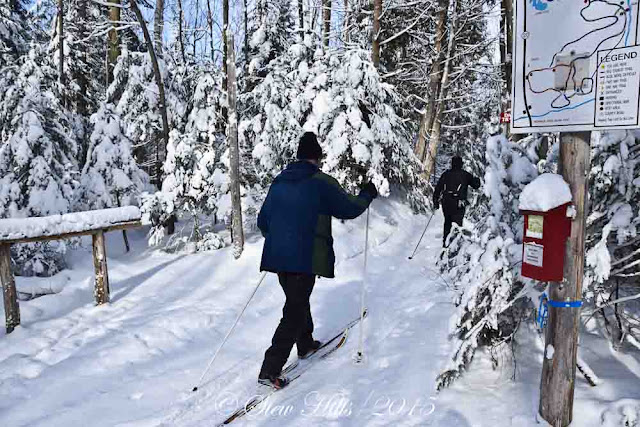 My two ski buddies are both faster than me, and disappear around the bends in front of me fast, so I don't get many pictures of them, and if I do, it's usually their backs, disappearing down the trail.  But they're very good about waiting for me, so it works out fine. 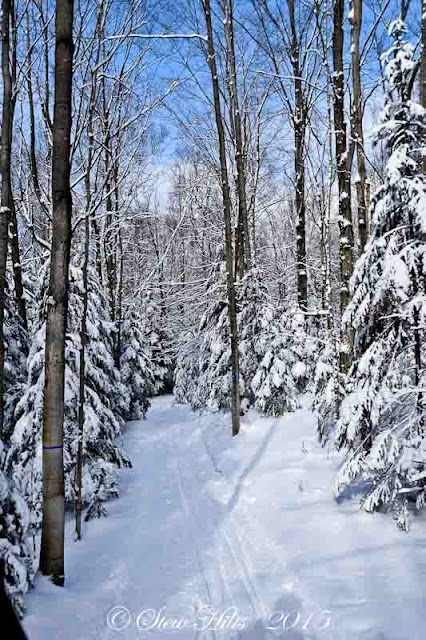 It was simply a beautiful day for skiing.  You don't get many days like this in our winter, with the right temperature, the right snow conditions, plus sunshine, so you just gotta get out there when you get the chance. 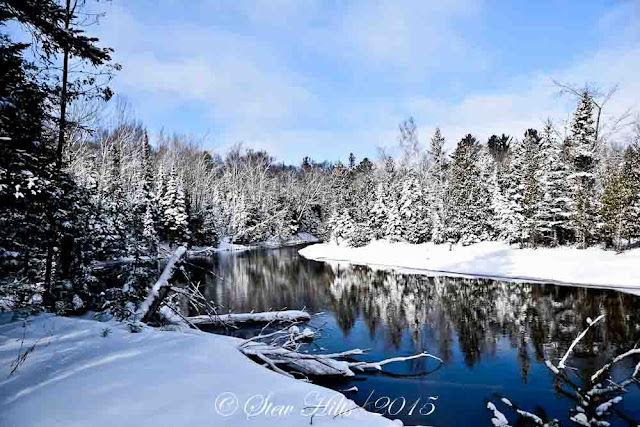 Eventually we came out to the Rankin River, where we could look over the water and see some wonderful reflections. 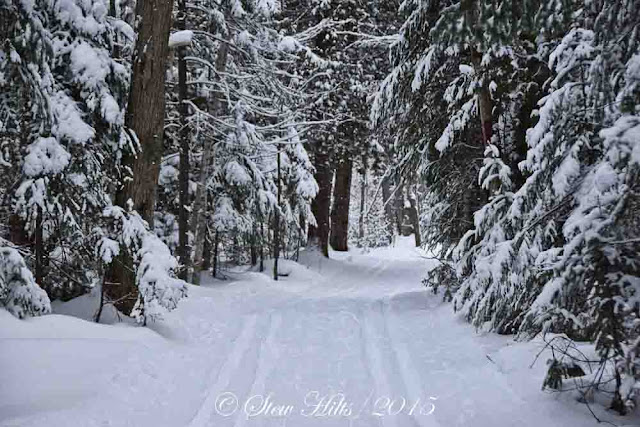 And then the long trail back.  We skiid about 2 hours altogether, but because we took breaks, I was feeling fine by the end. 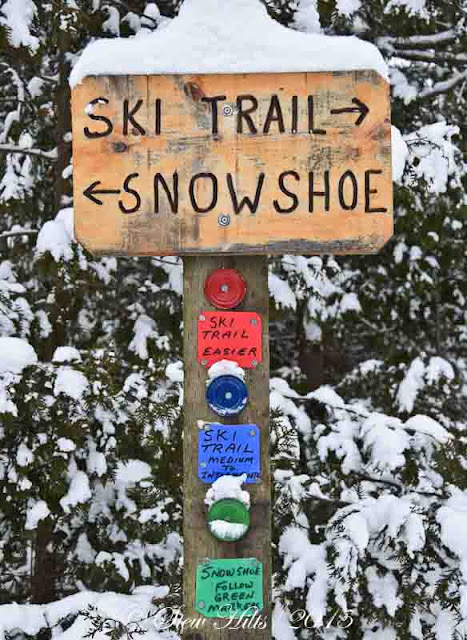 One nice thing is the separate snowshoe and ski trails, so snowshoeing is quite popular here too, but the two groups of trails don't interfere with each other.  They even have an outhouse!

Won't be many days like this, so we're very glad we went.  It warmed up the next day, and snow started to melt; yesterday it was well above freezing and raining.  All those beautiful xc ski conditions are gone until we have another good snowfall.

Several people commented on the word 'concession' to describe a rural road in yesterday's post.   I guess I didn't realize it wasn't a widely used word.  Here, surveyors marked out roads in a fairly standard grid pattern after treaties had been negotiated, and southern Ontario was opened for white settlement.  Blocks of land bounded by roads usually had 10 or 12 hundred acre farm parcels within them.  These roads were usually numbered, so here the north/south roads are called 'Lines', as in 7th Line, 9th Line, and so on.  And the east/west roads are called Sideroads or Concessions, as in the 4th Concession, the 7th Concession, etc.  So it's just a word for a rural road, usually here it's a lesser used road that is still gravelled.  Over time the main roads end up  paved.