After looking through my slides to find pictures of the forest types and other vegetation in Kimberley Forest, I am frankly appalled at my own failure to get out there and get more and better pictures!  I'm supposed to have an interest in natural history, and I have lots of pictures of plants from elsewhere, but virtually none from here.  That's the biggest thing I've realized from doing this series of posts so far, so next summer I know what I need to do!  In the meantime, here's a very brief and simple description of the vegetation of the Kimberley Forest area using the pictures I do have available.

The left 2/3 of this picture shows the forest on the slopes of Kimberley Forest, not that bright green forest on the bottom of the valley, or the green hayfields, but the more distant forest running up the slopes.  This is all a large extended area of Sugar Maple Forest, the lighter green patches on the lower slopes areas of more recent natural regeneration. 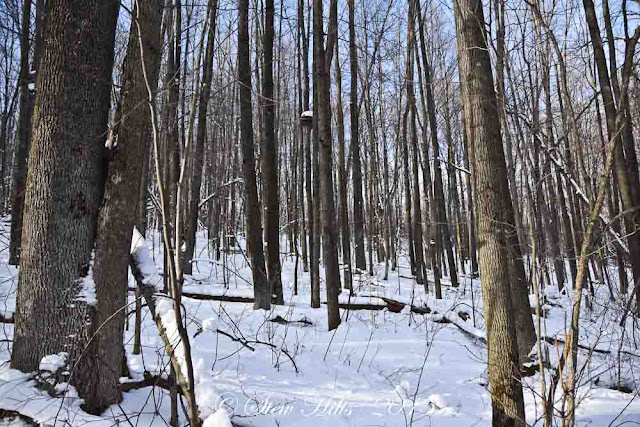 The Sugar Maple Forest varies in age, but it's certainly never been cleared and regrown, though there's lots of that going on around the edges.  There are some White Ash, Cherry, and other species, but it's mostly Sugar Maple. 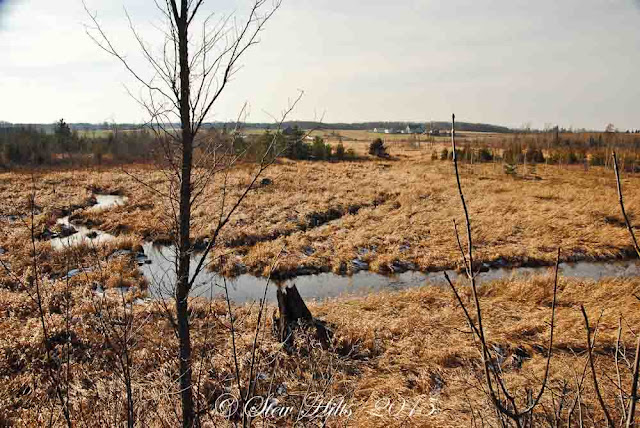 Up above the slopes behind that forest is a large wetland area, through which Lower Wodehouse Creek flows, some scattered evergreens on the higher patches. 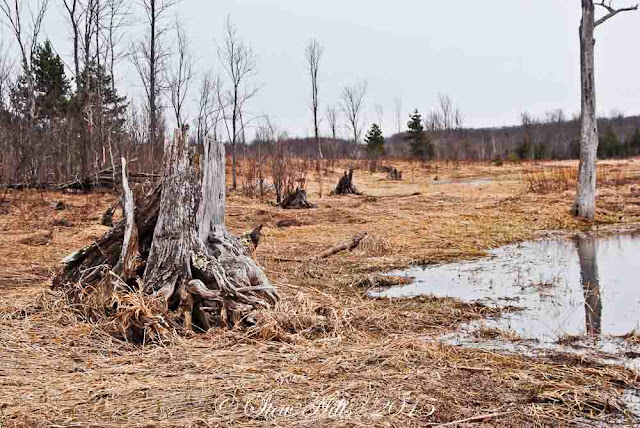 In part of this area are quite a few huge old White Pine stumps, which certainly make me wonder what this forest was like before the area was cleared for farming. 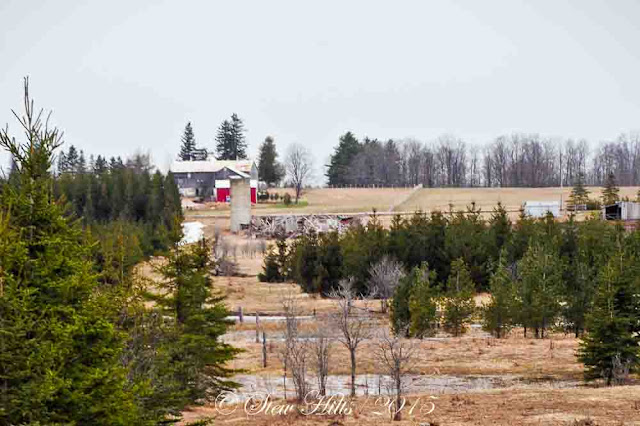 The other part of the flat upper land is reforested, much of it with White Spruce as you can see here. 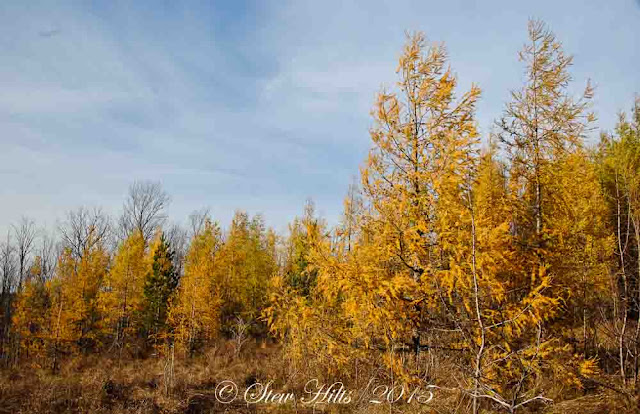 There a high ridge of the Banks Moraine right along the top of the slope, which was reforested with European Larch.  It grows fast and will soon be ready for thinning. 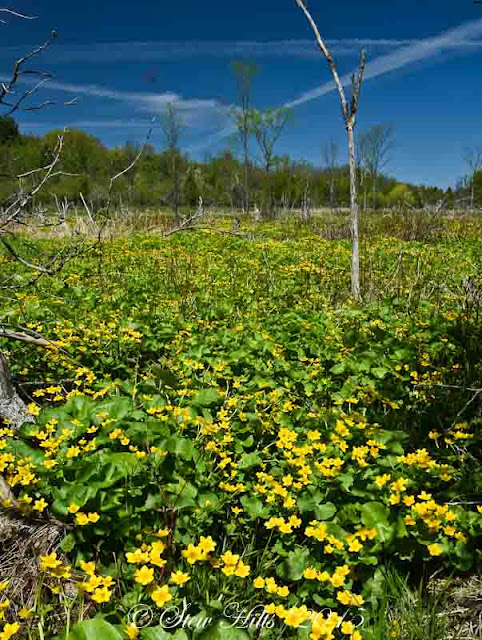 The flat land at the bottom of the slope is mostly wet floodplain, though higher areas were once hayfields.  Here the floodplain is dense with Marsh Marigolds in mid-May. 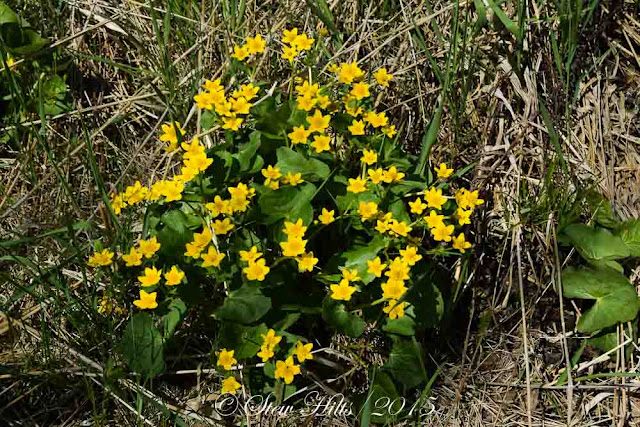 These are probably my best two pictures of vegetation in the entire forest!  Gotta get out there on some nice bright spring days next year. 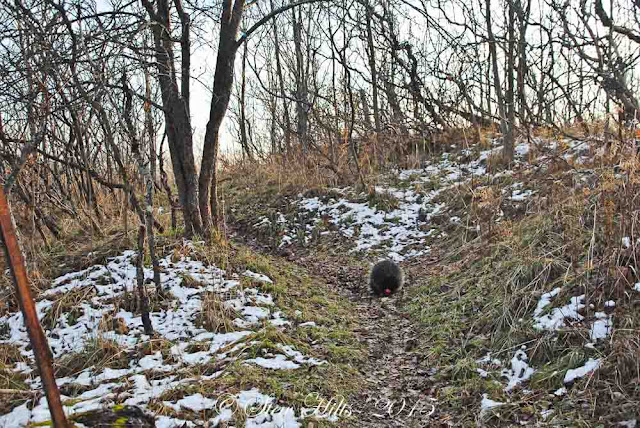 There's lots of wildlife too, though the main evidence is their tracks in the snow.  But I did run into this Porcupine one time, sitting right on the Bruce Trail eating an apple. 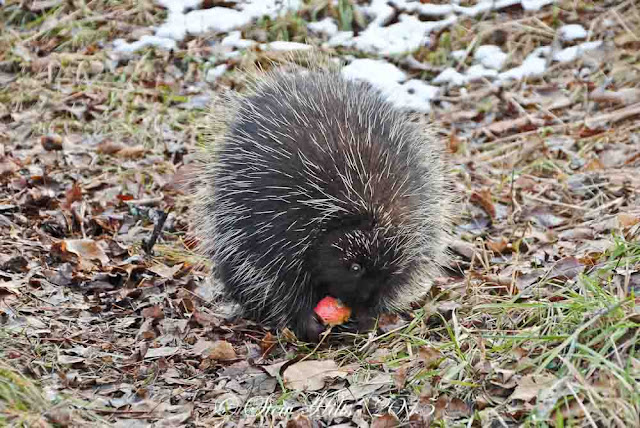 He wasn't about to move either!  He must have known that I wasn't a threat, and stayed there while I shuffled past.  If my dog had been with me on the other hand .....! 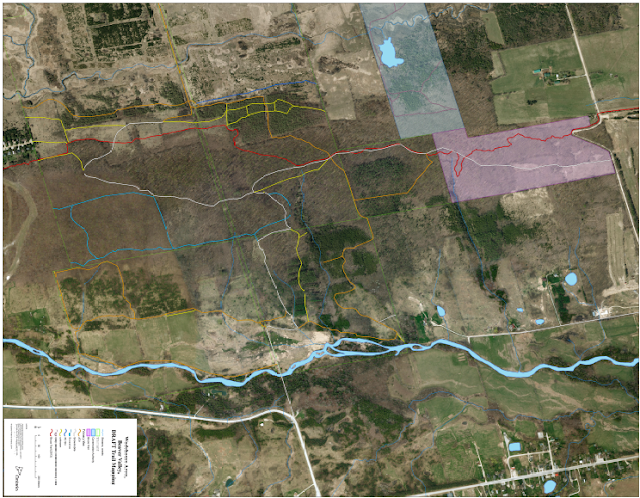 This is the only easily available map I've found, and to be honest it's not very good and hard to make out - but it does give you some idea of the trails that exist (coloured lines), and the other two properties owned by the Conservation Authority (where the sinkholes are) and the Bruce Trail Conservancy (where the main spring is).  The brown/grey band across the centre is the Sugar Maple Forest on the slopes, and all the darker green patches are reforested areas.  Open light brown areas are old fields, gradually coming up in young trees.  Another thing I need to do is get a better map for this purpose!

I took a break from my walking an hour a day earlier this week, when we had four days of temperatures rising and falling, rain at times, and ice when it froze overnight.  Sometimes the walking was downright unsafe.  But I did average an hour/day for January, and since Thurs. I'm over an hour/day again.  I'm really going to need to use my willpower to keep this up!  But we're supposed to get 4 days of light snowfall now, so hopefully I can get back to some skiing later in the week.