The really fascinating part of the Wodehouse Karst is what happens during the spring flood.  The water overwhelms the sinkholes and backs up forming a lake.  Then it overflows to the south, and joins the tinier stream, Lower Wodehouse Creek, which most of the year is a separate small watershed.  And then it forms a temporary waterfall! 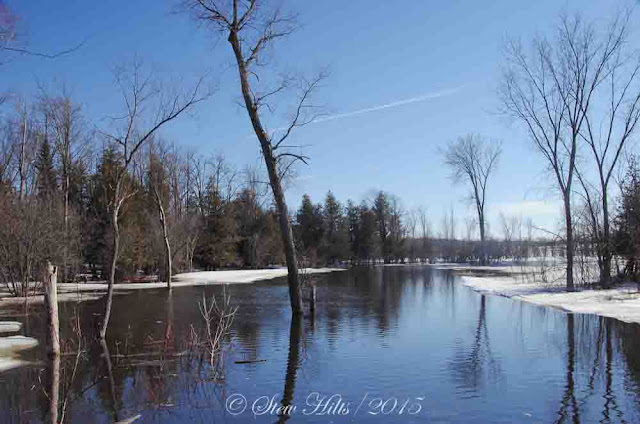 This is the flooded Wodehouse Creek at the 7th Sideroad, the upper end of the temporary lake, ... 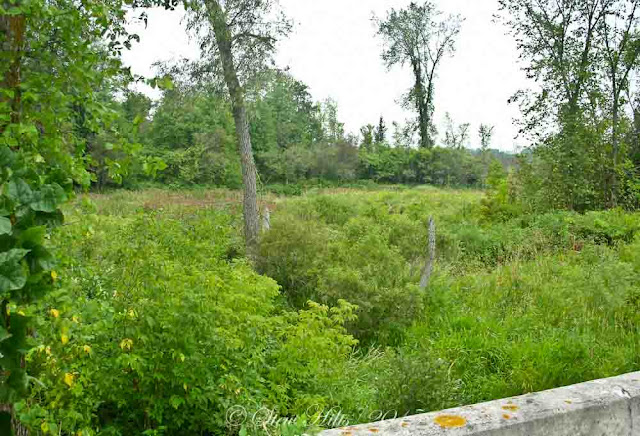 ... and this is the same photo in late summer, when the stream is at its lowest flow.  Compare the trees, not precisely the same view, but close. 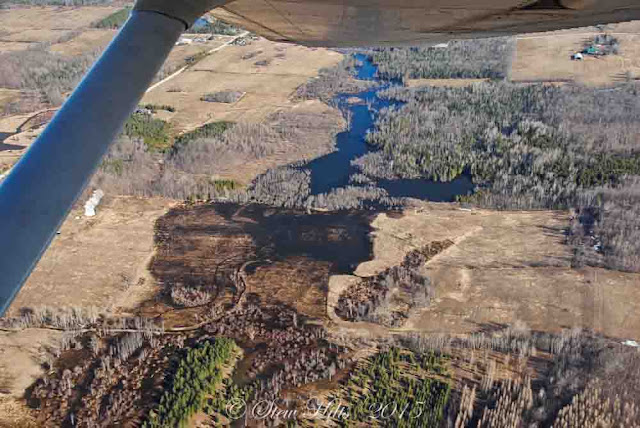 Here's another air photo showing not only the flooded lake, but the overflow into the field beyond, in the foreground.  The main sinkholes are under the dark blue water about in the middle of the photo.  The extension of the flooded lake to the right is a 'perched' pond, whick I refer to below.  It's normally completely separate, but during the flood stage is just a bay off the main lake. 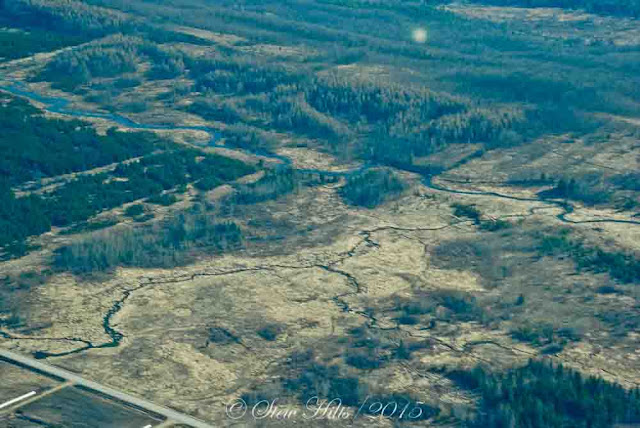 In this photo you can see both the flooded Wodehouse Creek in the background, flowing down from the upper left, and the much smaller Lower Wodehouse Creek flowing through the wetland in the foreground. 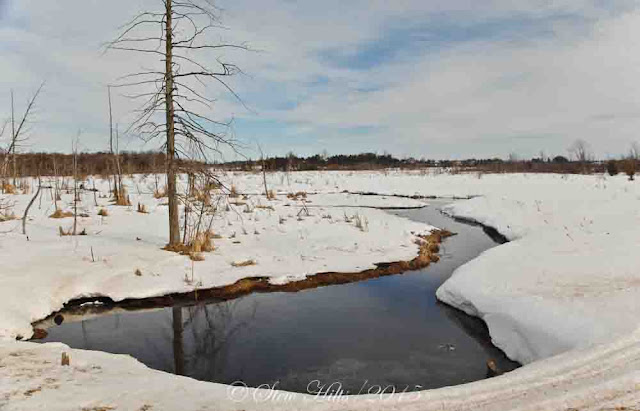 Lower Wodehouse Creek originates mostly in this spring, which as you can see, flows year-round.  It shows up right off the road in the very lower left corner of the photo above. 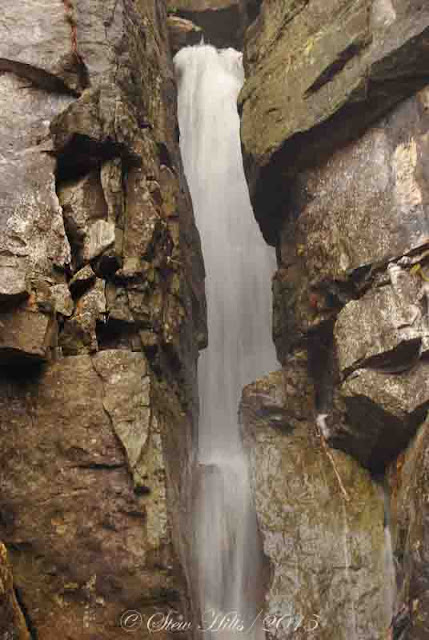 Together, the enlarged flow of the creek overwhelms another small sinkhole at the top of the Beaver Valley Ski Club, and forms a temporary waterfall!  The small sinkhole there normally takes the entire drainage of Lower Wodehouse Creek, so 50 weeks a year of so, this waterfall is completely dry.  This gentle looking waterfall happened for a few days one fall when we had 3 weeks of heavy rain. 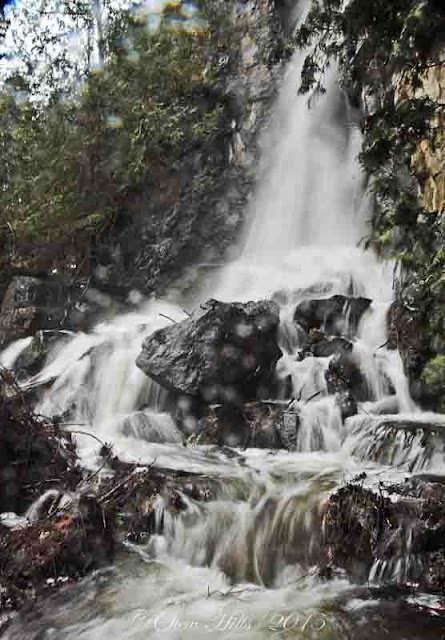 The spring flood is much bigger, creating a thunderous waterfall over the cliff, splashing over the boulders at the base in all directions.  The one time I have seen it, there was so much water I could not get close enough to get a full picture of the waterfalls. And then over a day or two it all dries up and goes back to flowing down the sinkholes!  The waterfall can last as little as a day or two, to as long as 6 weeks. 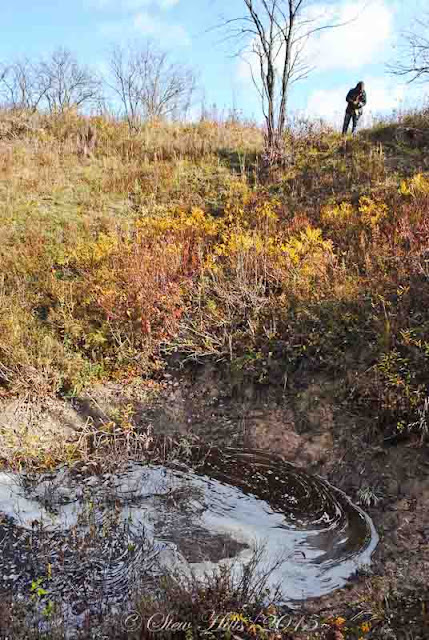 The perched pond I mentioned above was another mystery to me for a long time.  This is the final sinkhole in the main group of sinkholes, about 18 feet down below my fellow hiker up there. 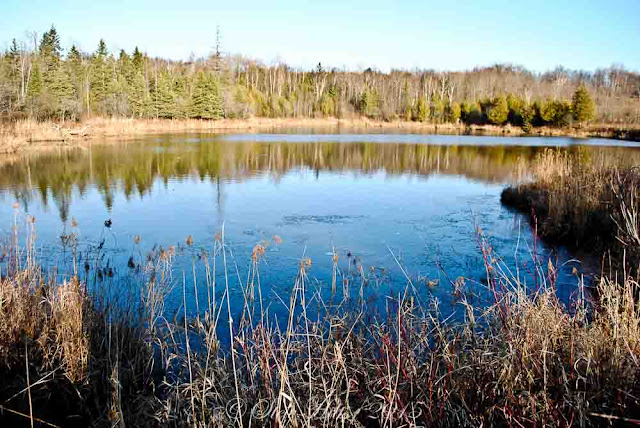 Standing where he is, you look beyond and see this large pond, at a much higher water level.  It's a 'perched' pond because it sits higher than the creek, but isn't connected to the creek - 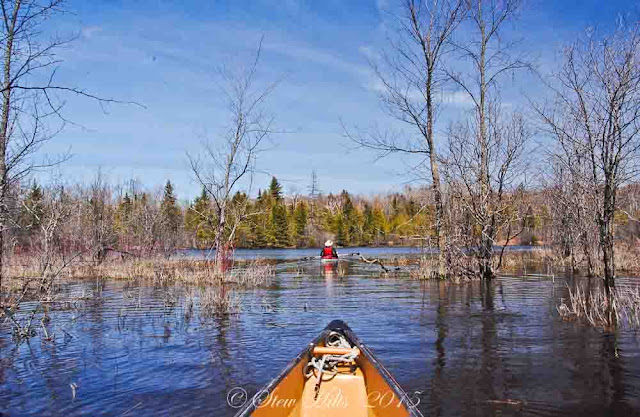 - except that is, during the spring flood.  Having walked this many times, I was amazed to see the water level here when we finally paddled in two years ago.  I'm over top of that sinkhole here, about 24 feet below me; the canoe ahead has just passed over the intervening ridge of land, only about 4 feet deep, and is headed out into the pond.  Obviously this isolated pond gets refilled every spring during the flood.  Mystery solved. 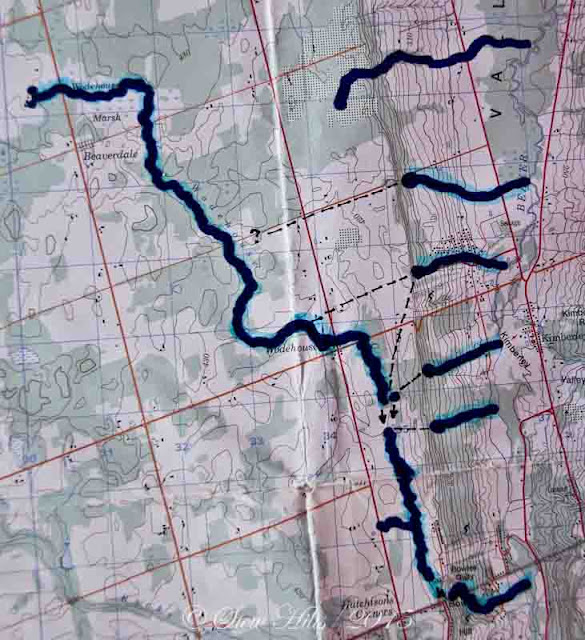 The last mystery of Wodehouse Creek is the number of springs along the Niagara Escarpment slopes that somehow originate within the Wodehouse Creek watershed.  I've highlighted both the creek, running here from top to bottom, and the 6 springs, emerging on the slopes and running east, down to the Beaver River.

The question is, how does the water flow from the creek above, to the springs below.  Combined with the fact that the creek seems to get smaller as it flows downstream, I suspect it means that there are other sinkholes and geological channels through the bedrock, that are feeding these springs.  All of these springs and the streams below them flow year round, not just during the spring flood. 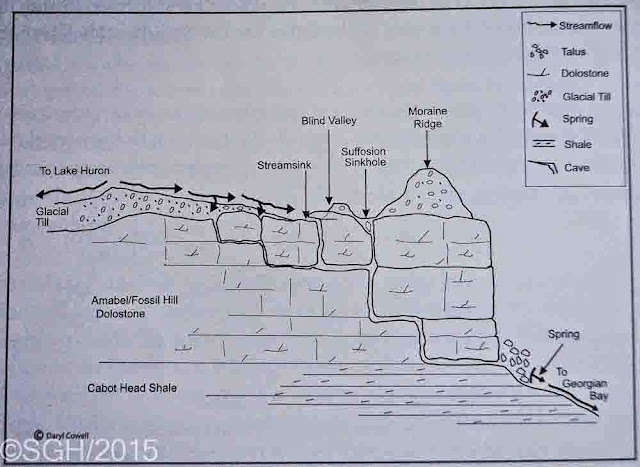 For anyone wondering what 'karst' geology is, this diagram from the excellent book A Guide to the Geology and Landforms of Grey and Bruce Counties, helps explain it.  The dolostone layer here, the Amabel Formation, is porous, with cracks in the rock which let water flow through, so streams disappear into sinkholes before they get the chance to flow over the edge of the cliff.  But the Cabot Head Shale is impermeable, so water does not flow through it; instead it flows along the top of that formation, and out to the slope where it forms a spring.  '

Karst' geology refers to a landscape where soluble rocks such as limestone or dolomite (as here), enable drainage into sinkholes, limiting drainage on the surface.  Normally there are springs at a lower level associated with the sinkholes.

Hope you've enjoyed my tour of all the features of Kimberley Forest, including the amazing Wodehouse Karst.