Suddenly in early March we seem to start getting more sunny days, and this year it's started in late February.  The result is that I really notice the sunrises, when the sun rises, at least sometimes, into a clear blue sky - and the point at which the sun breaks the horizon keeps moving north! 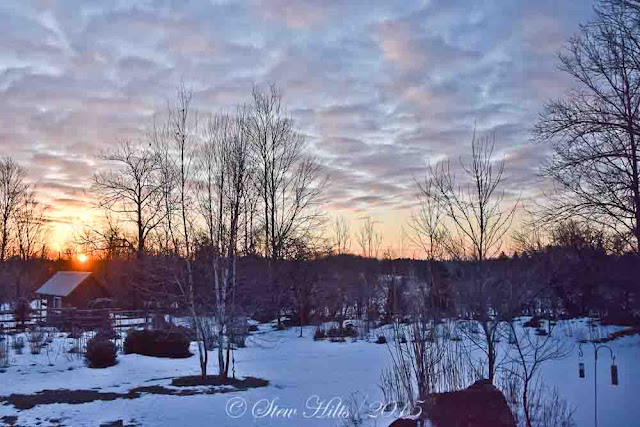 This is the most recent sunrise I caught out our living room window, though the clouds are cutting off the sunrise fast (and there's a lot more snow back now!).  The sun is rising just over my little garden shed.  Take careful note of where among the trees the sun is breaking the horizon. 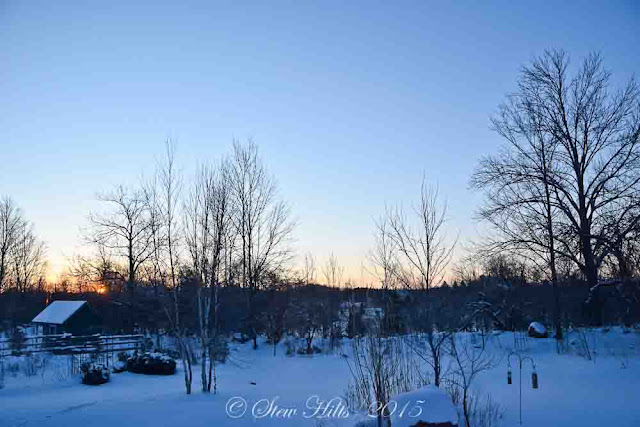 This is only 5 days earlier, on Feb. 18th, and that below only 4 days before that on Feb. 14th.  The sun starts moving fast toward the north at this time of year, and the same thing would be true if I could show you the spot at which the sun sets. 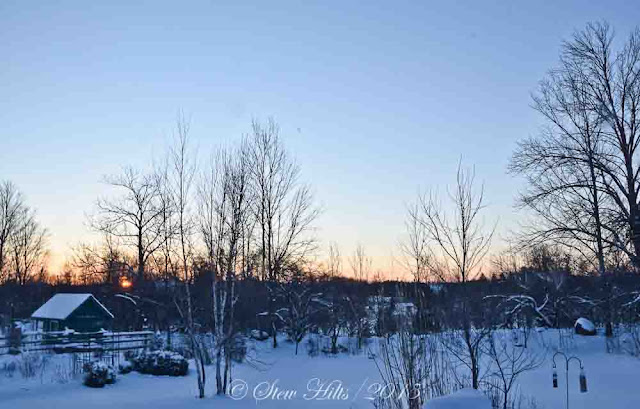 So the days are longer, the sun is higher in the sky and the snow on south-facing slopes melts more quickly.  I can walk the dog later, and it's just brighter out in the middle of the day.  The willows are turning yellow, and the dogwoods turning red.  Porcupine are out in the bush, leaving their waddling tracks behind.  Spring is only 3.5 weeks away! 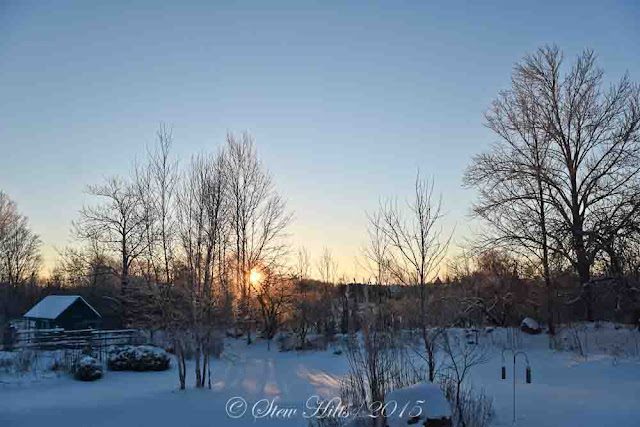 Compare the first three to this one in early January, closer to the solstice.    This is about as far south as the point of sunrise gets outside our window; it seems to just sit in one place for six weeks centred on the solstice.  But at this time of year, it speeds up as if it wants to get back to summer as fast as it can!

We got the 'big' snowstorm here, though it certainly wasn't as big as many we've had.  Further south in Ontario there was a lot of slush, mush, freezing rain and rain, but here it was just snow.  So we're back in winter, though not back in severely cold temperatures, and it's supposed to rise well above freezing again by Tuesday/Wednesday.  This is not the kind of winter I like, because the above freezing temperatures simply destroy the cross-country skiing and snowmobiling.  But I did get out to ride the snowblower for a couple of hours clearing the driveway.  It was an unusual snow accumulation, because it came with an east wind which made drift patterns different.  My fibre artist wife is back from two quilting retreats in two weeks; she's been home less than she's been away at these sewing parties.  It's nice to be back together.