The most interesting feature of the larger area known as Kimberley Forest is undoubtedly the Wodehouse Creek and the associated 'karst' geology features.Today I'll tell you the basic story of the stream, sinkholes and springs, and tomorrow I'll tell you the more complex story of what happens during the annual spring flood.  I wrote a detailed series of 6 posts on this topic last April; they're listed at the bottom of the page for anyone who'd like the complete story. 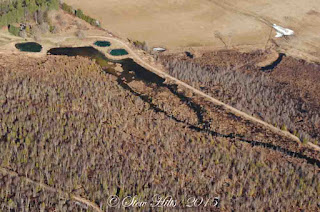 As you can see I also took a filght over the creek, and captured some fascinating photos of the watershed.  This is the cluster of springs where the creek originates. There's enough water coming out of those springs to generate a stream about 20 feet wide and a foot or more deep immediately, so they are very large springs. 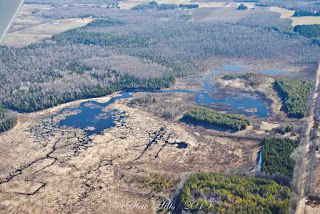 The stream only flows a few miles before reaching the sinkholes.  Here it's flowing through a wetland on the left, and into a large beaver pond in the upper right background.  You may be able to see the straight line of the beaver dam where the water ends toward the right hand side of the photo. 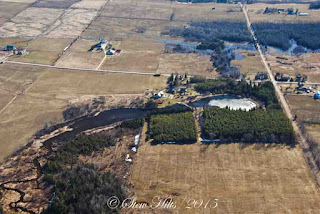 It flows a mile of two and then into the old millpond at the hamlet of Wodehouse, the crossroads in the background.  There was a sawmill here years ago. 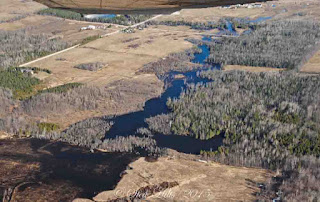 And finally it flows downstream toward the sinkholes.  As you can see, these photos were taken during the spring flood, so the stream here is actually a lake flooding the entire small valley and overflowing into a field to the south in the lower left.  The sinkholes are under the dark water just beyond the first trees. 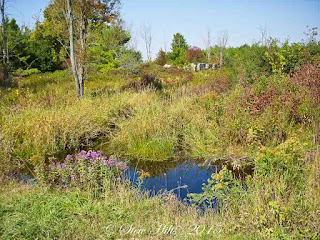 But most of the year, Wodehouse is a small little creek flowing down a natural channel.  Here's there's an old barn foundation in the background, close to that large wetland shown above, which has been protected as conservation land. 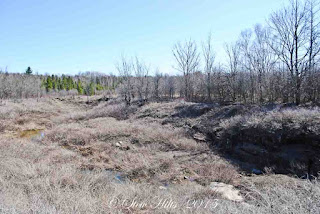 A very early spring photo shows the landscape of the sinkholes best.  This is the blind valley where the stream normally ends, dropping into cracks in the limestone, both in the lower right, and toward the upper left. 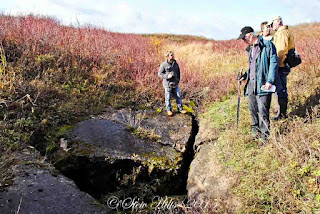 The sinkholes are neither big nor dramatic; they're just cracks in the bedrock.  This is late summer when there's very little water flow, in one of the smaller sinkholes, but there is water flowing down that crack at the bottom of the picture. 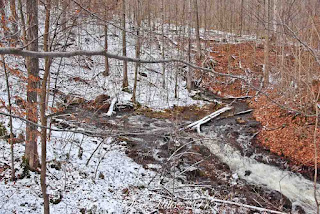 After disappearing into the ground, the water emerges in several springs spread out along the escarpment slope about 45 minutes later (according to the studies).  This is the biggest of those, most visible after a light early December snowfall which leaves the springs themselves easy to see. 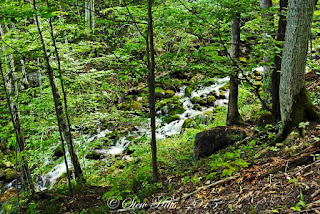 This spring generates a nice stream that tumbles down the slope, here seen through the green leaves of the summer trees.  At this point it's locally called Bill's Creek.  The Bruce Trail follows a route right beside this stream.  I'm probably standing on it to take the picture. 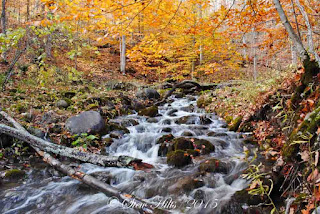 An early fall picture gives a different view, and a lower water level. 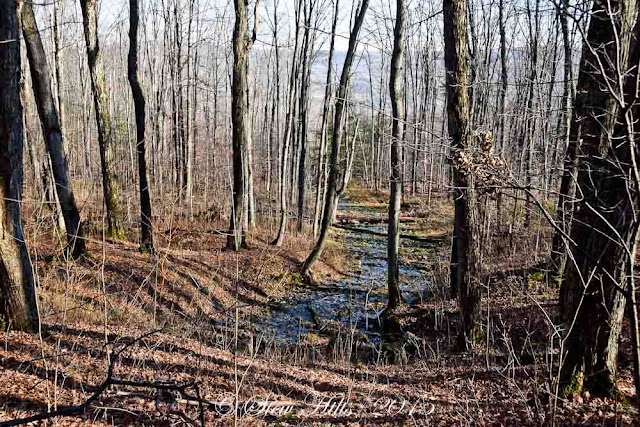 There is one other smaller but significant spring in the middle of the Kimberley Forest, shown here (along with dozens of tiny little seepage spots on the slope).  It's located some distance to the south of the sinkholes, unlike the main springs, which are straight to the east of the sinkholes.  I am standing on the Bruce Trail to take this picture.

The earlier series on the karst can be found starting here, and runs for 6 posts (interrupted by one on the weather, a surprise late April snowfall that buried the daffodils in white)!  Tomorrow - what happens during the spring flood.