On one of those errand trips into Owen Sound I dropped by the harbour to see if any lake freighters were in for the winter.  Usually ice keeps the freighters port-bound for 3 months or so, but even without the ice this year, crews need their winter break.

There were two big ships in the harbour, the Rt. Hon. Paul J. Martin on the east shore, and the Algoway docked by the grain elevators on the west.  Both riding light (or empty) as you'd expect.  They probably both have skeleton crews staying on board for the winter. 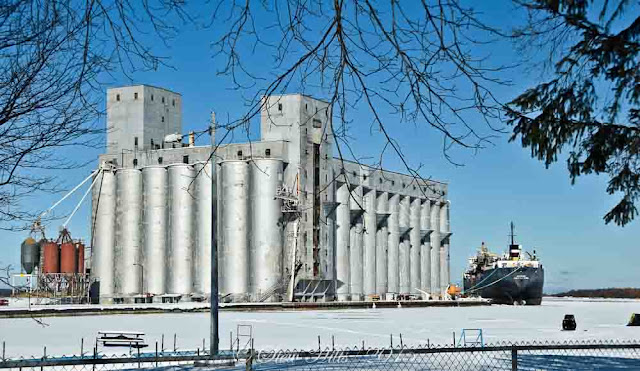 The Algoway, out of Sault Ste. Marie,  is a self-unloading bulk carrier which can handle a variety of cargoes, from coal to grain.  Like all Great Lakes freighters, it spends its life moving bulk cargo between bigger ports around the Great Lakes.  Cargo moving around the Great Lakes is mostly bulk raw materials like coal, ore, salt, aggregate, or grain, rather than containers, as you might see in ocean ports. 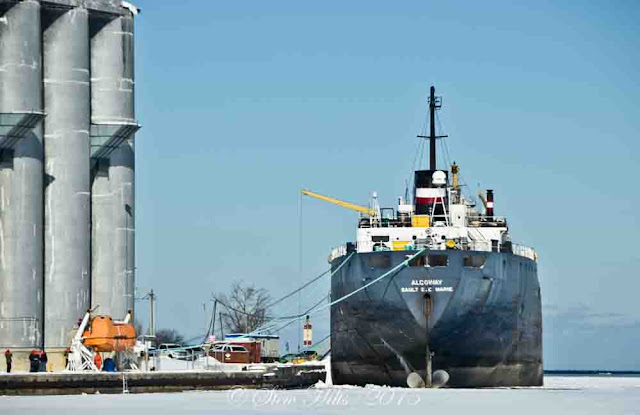 Both ships usually carry a crew of about two dozen, but there will just be a few staying for the winter.  If you look closely, you can see two pick-up trucks and a van, a short gangway, and the heavy hydro cables running overhead to shore beside this ship.  There's a small crane for loading too.  Winter is a time for maintenance and restocking. 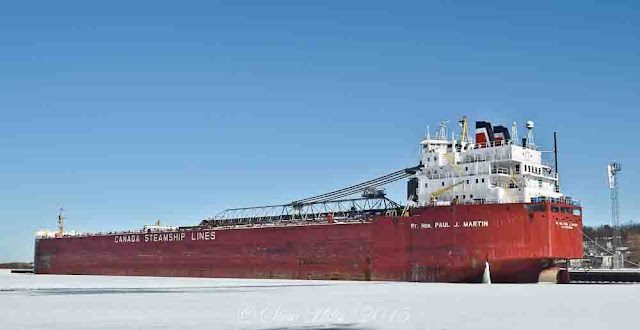 The other ship is the slightly bigger Rt. Hon. Paul J. Martin, named after one of our recent Prime Minsters (whose family owns Canada Steamship Lines).  They're both about 45 years old, but this ship has quite a different history, sailing first as the H.M. Griffith until it was dry-docked in 1999 for major reconstruction.  Basically the entire cargo and bow sections are new, with only the old stern and engine room kept from the former ship.  Ships on the Great Lakes last about twice as long as saltwater ships, simply because freshwater is less corrosive. 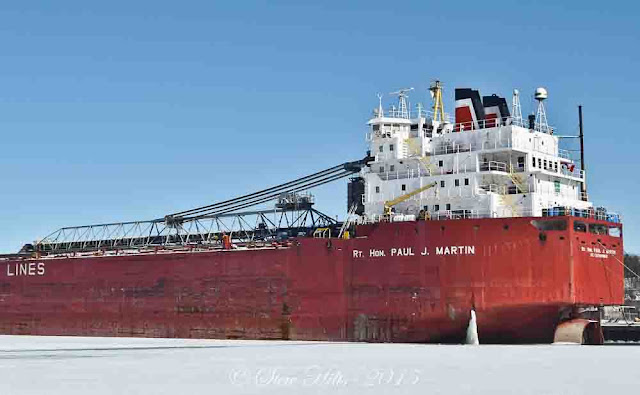 The unloading system is quite amazing, a series of moving belts in the hold that can bring up whatever cargo it's carrying, transferring it to that long unloading boom which reaches out to deposit the cargo on the dock.  Loading would be the opposite, with an onshore boom bringing cargo out and dropping it through the hatches into the ship's hold.  On modern ships like this one or two men can handle the entire unloading in a matter of a few hours. 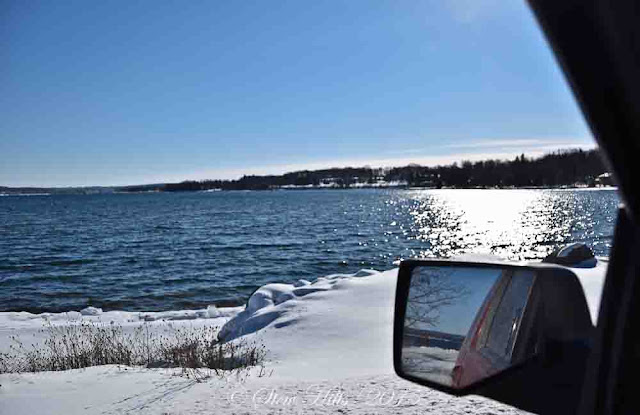 Later I drove down the shoreline to drive around Balmy Beach Road, almost the only place near Owen Sound where the road goes right along the water.  I remember bringing my grandmother for drives here, to see the scenery of the bay; it was a favourite for her.  Today I just stopped for a quick 'out-of-the-car-window' shot.

But if you look closely you can see the two ships in the harbour, through the distant haze.  I'm intrigued with the rhythm of life on board the big Great Lakes freighters (and other ships around the world).  There's the daily rhythm of watches, round the clock when sailing, and the annual rhythm of months on board and months to go home and see family.  As with the military, it takes a special kind of spouse to handle a family when one partner is away for months on end.  I sympathize with all the Phillipino crews who spend often more than a year away from their families, sending money home.  Not many North Americans want that life anymore, in spite of the reputation for great meals that sails with these ships!Check out a site like 'boatnerd', 'marinetraffic', or 'vesselfinder' to find out more about Great Lakes ships and where they might be located at any point in time.

Have you ever thought about the logistics of restocking food on these ships, or even more challenging on a navy ship with a large crew?  Our daughter works for a company that does just that, juggling trucks carrying the supplies with ships in different ports, heading out to sea for times as long as several months.  Somebody better have a good mind for what's needed for all the crew to eat well over that time!