Walk in the Woods, Part 2

Picking up my snowshoe walk in the woods where we left off yesterday, I had to climb over the old stone fencerow, and walk round the edge of the field, then through the woods until I rejoined the trail where I came in. 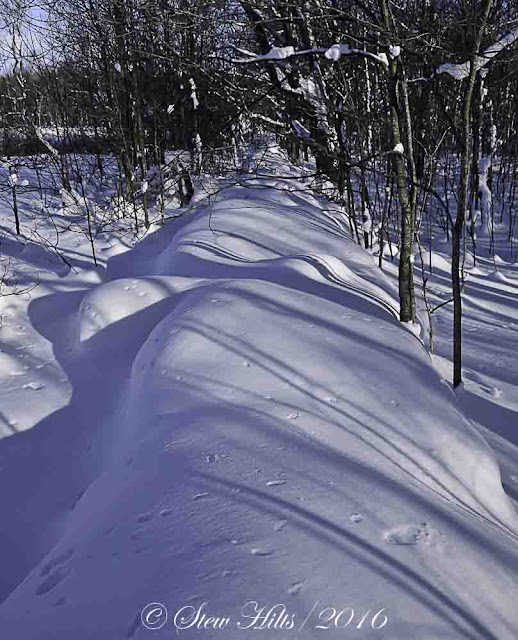 It's a little awkward climbing over this old stone fencerow, so I walked along it until the snow provided a route up, and then along the top of it until I could easily get down.  Worked better than falling on my nose going straight over! 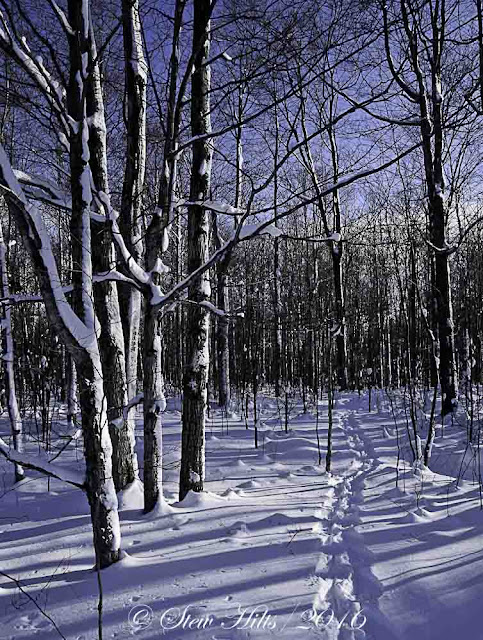 Leaving the woods behind for 5 minutes, 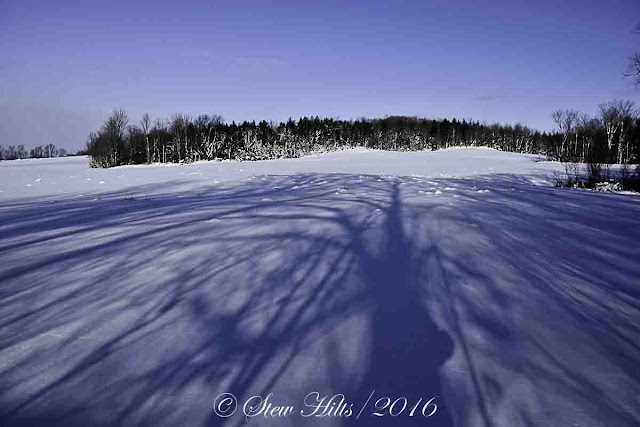 I headed out along the edge of the field.

Looking across the field it appeared that a lot of snow had been blown into the woods on the far side.  I waited until I could look straight down the old farm lane before getting the picture.  This is the lane with the beautiful old dry stone walls I've shared before. 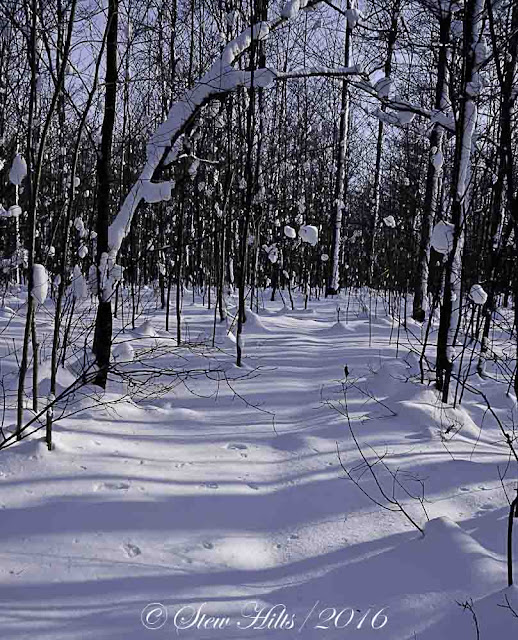 It was really easy breaking trail in the fresh new snow with my big snowshoes; they were big enough that they didn't sink in much. 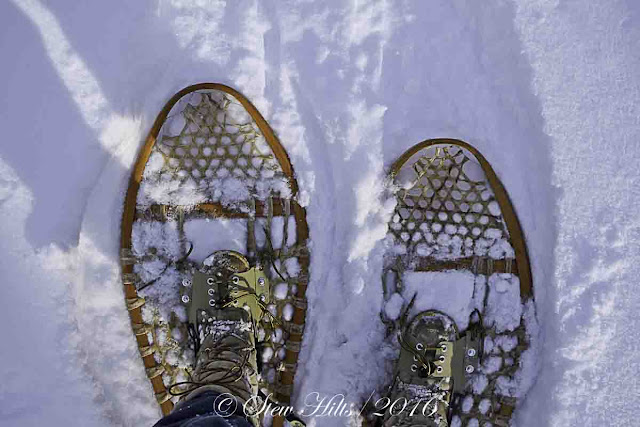 They worked fine.  One trick with snowshoeing is to have snowshoes that don't sink in too far, so that as you step forward you don't catch the tip of your snowshoe on the snow.  If you do, it's often head-first into the snow!  The long 'tail' on the back of these ones helps prevent that too, by dragging behind.  Smaller snowshoes are worse if they sink in far. 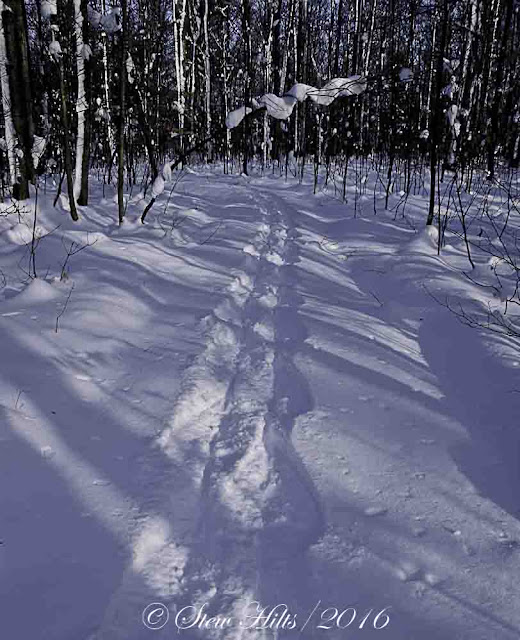 I rejoined the trail I had walked in on,

under this interesting twisted snow-on-a-branch, 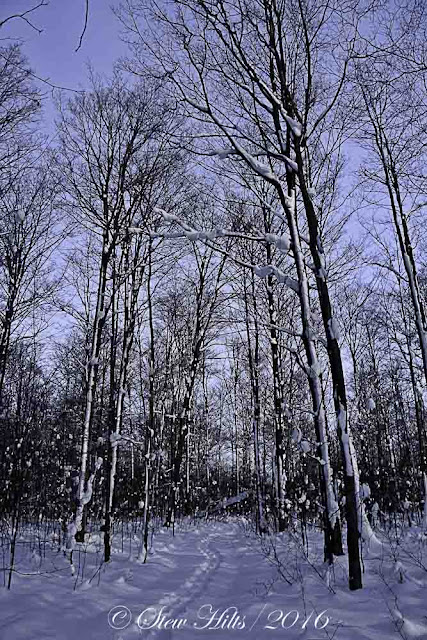 and back through the forest toward the beginning.

All around me the woods was white.  I cropped this to try and capture the snow in the understory shrubs at eye level in all directions. 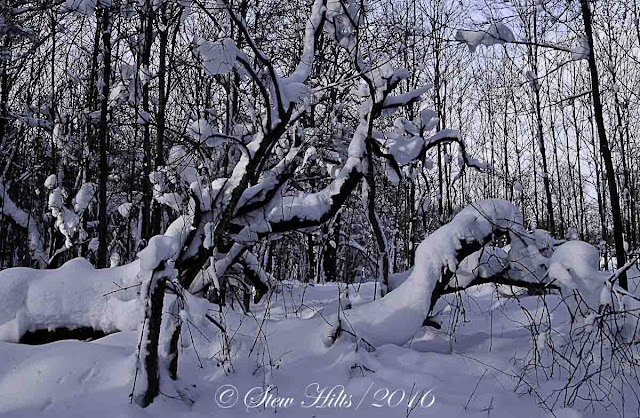 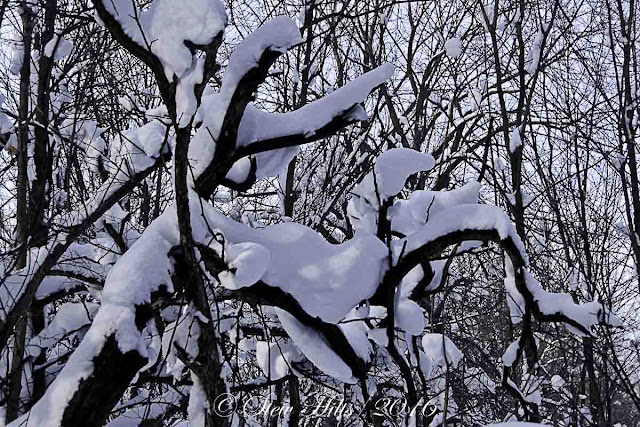 Some interesting patterns of snow on the trees! 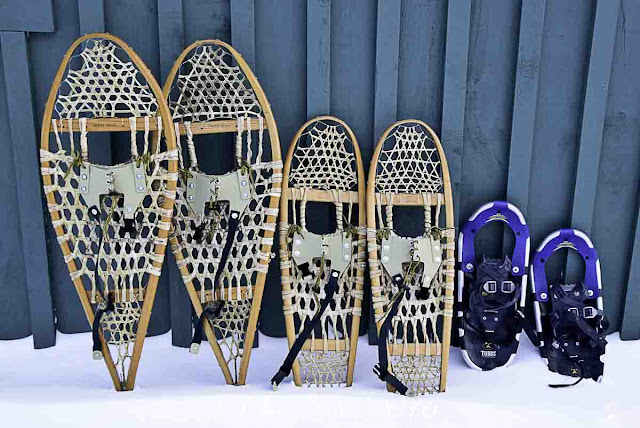 Some of you commented on my snowshoes yesterday.  I have three pair I regularly use, the big ones on the left the ones I used on this hike - when the snow was deep and I would otherwise sink in too far.  At the opposite end are the little aluminum and plastic modern snowshoes, which are ideal for a well-trampled trail.  When I go on organized snowshoe hikes I usually end up at the back of the line (as the slowest person), so I have no problem at all with quite tiny snowshoes.  And in the middle are those 'bearpaw' snowshoes, for times when I'm walking with just a friend, as long as the snow isn't too deep and I'd need the big ones.

There's a widespread myth that the Inuit have 100 words for snow.  The truth is more complex, but you do have to be aware of a wide variety of snow conditions if you're going to do much snowshoeing or cross-country skiing.  You just adapt to what you find out there.
Posted by The Furry Gnome at 7:55 PM