Just before Christmas, after our big snowstorm, but before our big melt, a friend and I snowshoed down the 10th Sideroad, just three roads north of us here.  It used to be a road, and you could probably still get a vehicle down it with care in a dry summer, but they don't maintain it anymore, and now it makes a nice walk in to the point where it crosses Wodehouse Creek. 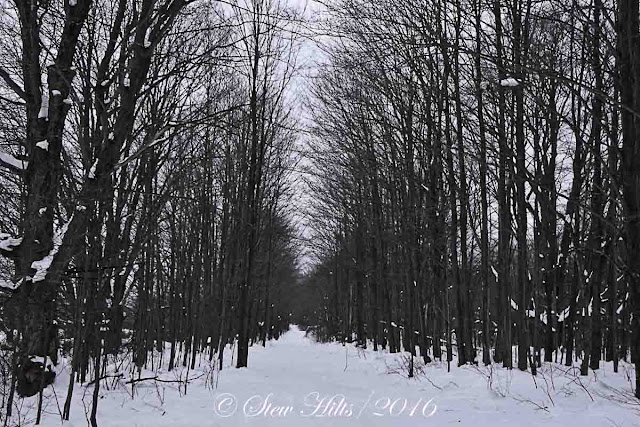 We parked across the road, beside the tiny New England cemetery, and headed down the trail. 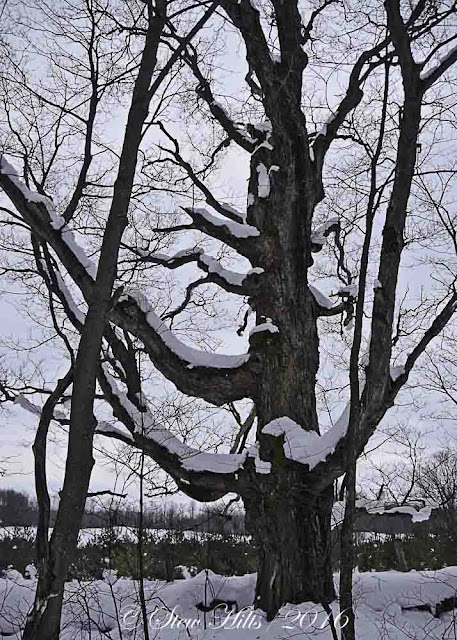 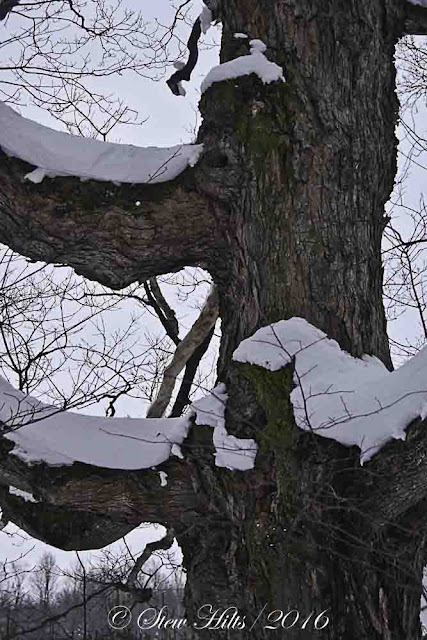 Passed one of my favourite giant old Sugar Maples.  It's got such character; it's rough bark suggests to me that it's been growing 150 years!  Each of those lower branches is big enough to be a substantial tree in its own right.

The entire distance, almost a kilometer, is bordered on one side by an old stone fencerow, built of fairly big boulders, but so overgrown it's hard to get a good picture - and at this time of year smothered in snow. 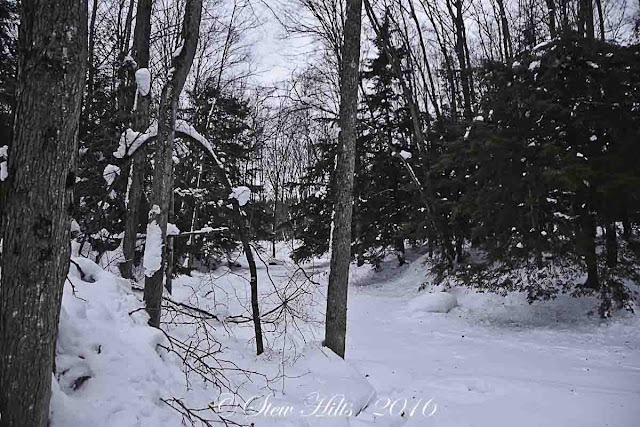 We got in as far as the bridge, but surprisingly didn't see even a trace of open water.  There's a fair current in the stream here, and it hasn't been that cold, so I didn't expect it to be frozen over. 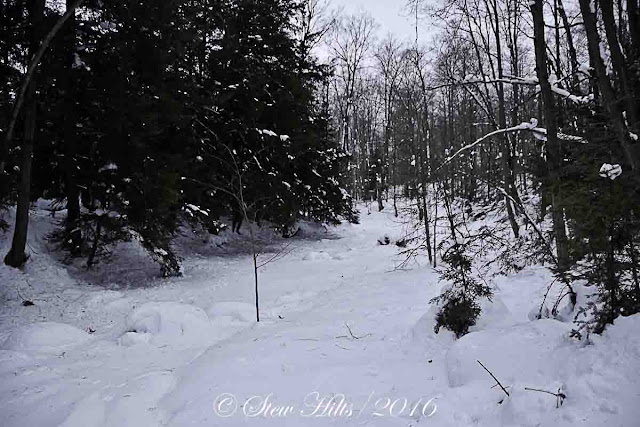 With the deep fresh snow, this was a day for the big snowshoes, and we left the trail to tramp along the riverbank and see what we could see.  In spring, the water will be just a torrent down this little valley. 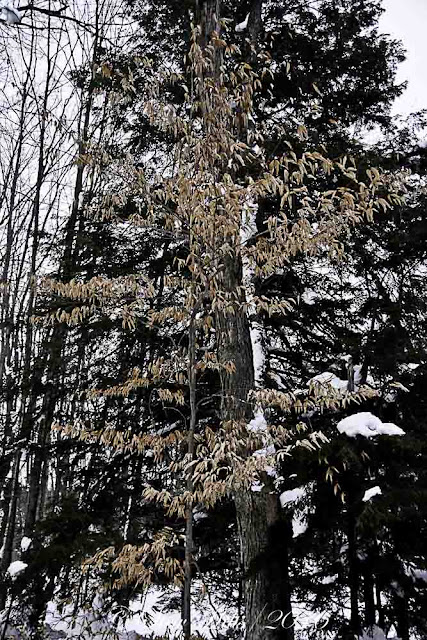 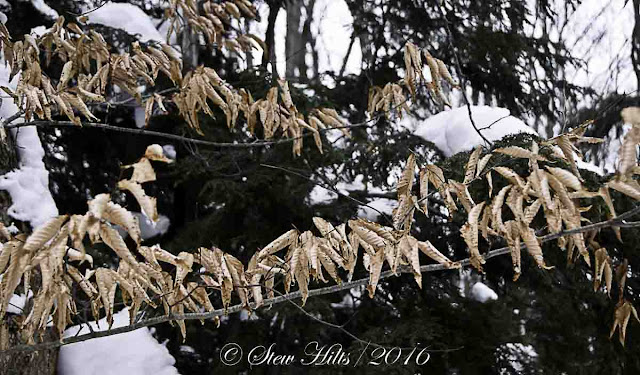 The evergreens are Eastern Hemlock, here backing the dry Beech leaves.  Hemlock will grown in the shade of taller hardwoods like Sugar Maple.  There are quite a few of them along the creek here. 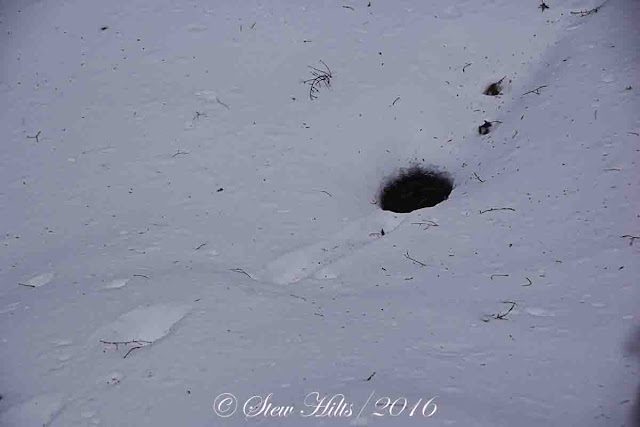 We couldn't see any open water, but we could certainly hear it gurgling under the ice.  Then we spotted a single hole in the ice, a hole that looked suspiciously like a breathing or access hole for some animal. 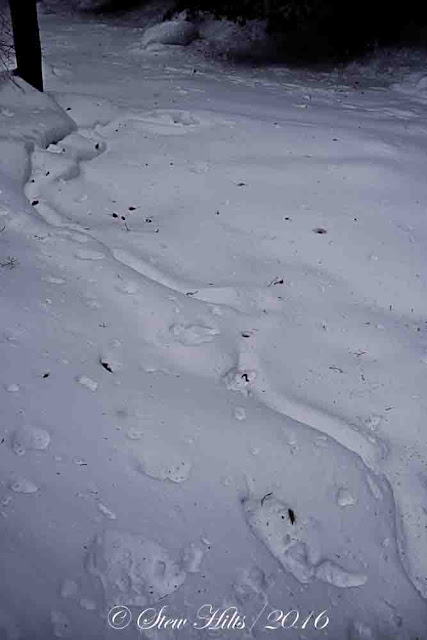 Past a tree, I spotted these unsual tracks down on the snow over the ice, leading to that hole.  Could they possibly be a trail left by an Otter!?  They were the right size, and this is the only place in the valley where I've previously seen otter slides in the snow, down to the river. 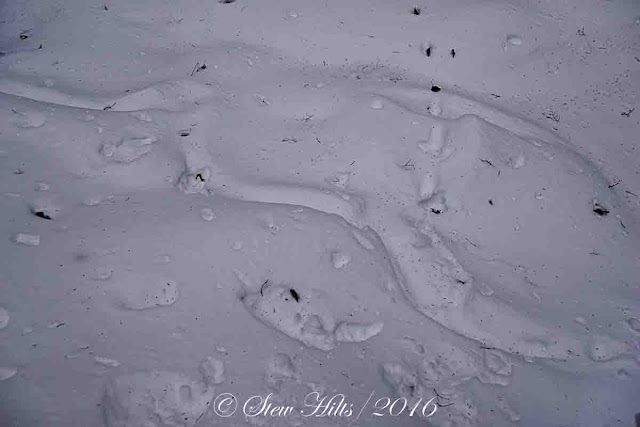 I'm going to call it an otter track, probably most exciting evidence of wildlife I've seen in the valley.  Challenge me if you will!

Meanwhile, it was down to the cardiologist today in Kitchener.  Good news, as it looks like the old ticker will work a few more years yet.  But this half of the drive was nasty, with blowing snow covering the road.  A much slower drive than usual, but we're home safely.  More snow to come tonight.
Posted by The Furry Gnome at 7:29 PM