As I described yesterday, when you walk down the Clayburn Creek Trail you eventually come to a set of stairs that takes you back up to the west end of the subdivision.  My son-in-law had informed me that there were over 300 steps, so I was anticipating a pretty slow climb! 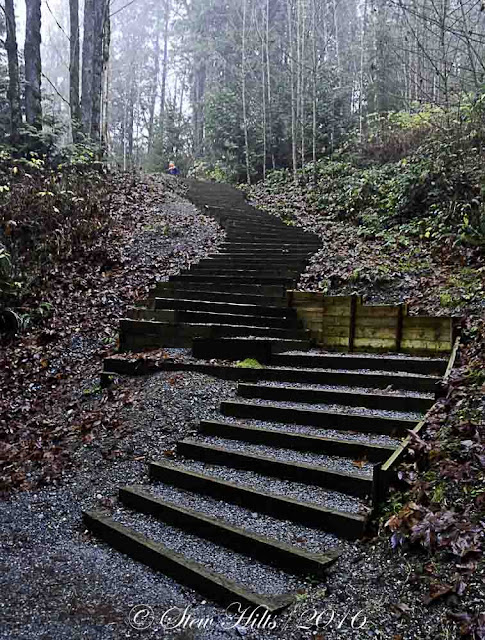 This is the view up the stairs from the trail.  I actually walked this trail twice, the second walk with our son-in-law and grandson.  That's our grandson, racing up the stairs ahead of us!  We had to tell him to slow down. 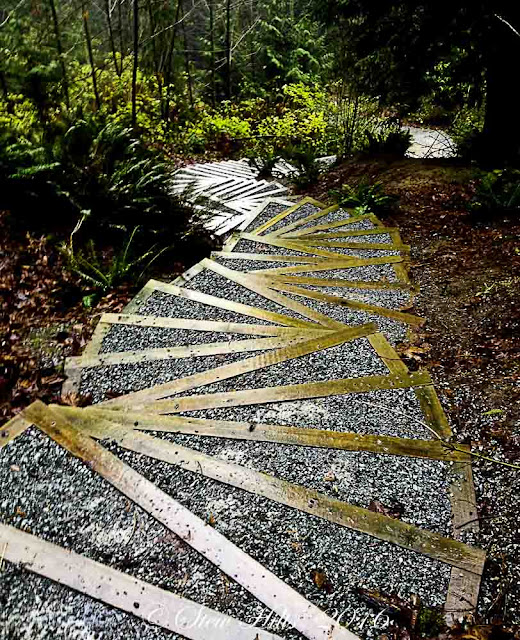 The stairs were truly remarkable, as I said, the best stairs on a walking trail I've ever encountered, and the view back down was really neat as the steps wiggled up the slope! 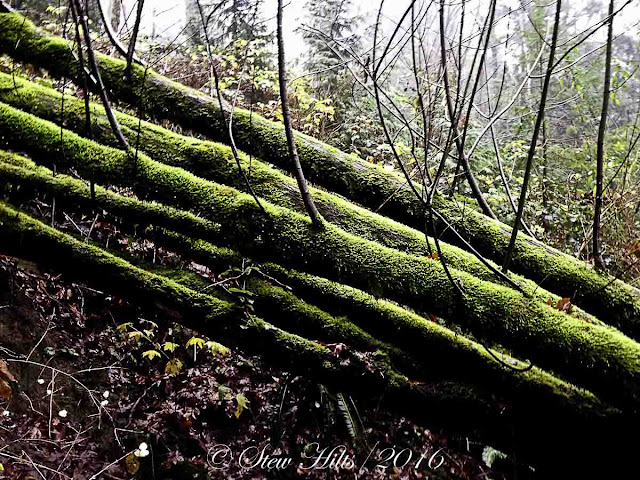 Along the way there were more moss-covered trees. 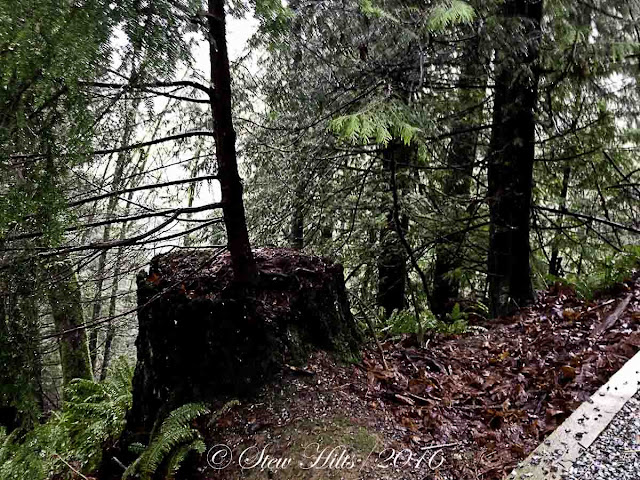 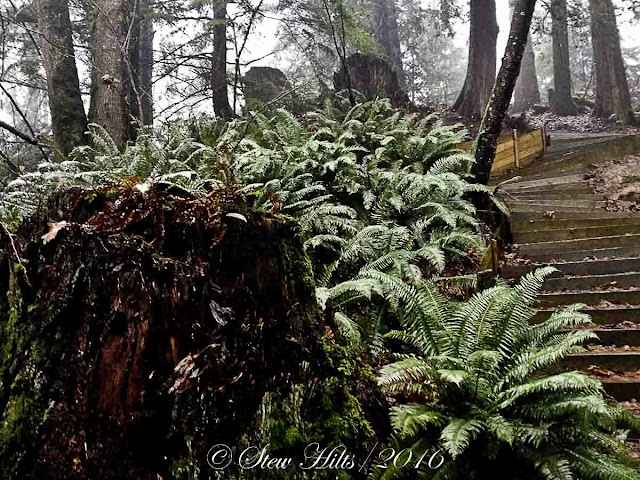 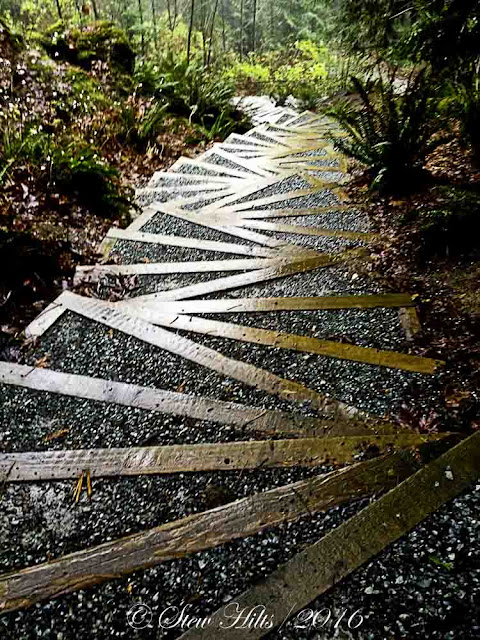 But it was the stairs themselves that were so remarkable.  How often have you walked down stairs that are the wrong size, too wide for a single step, or too narrow for a double step?  We once walked down 973 steps in a village in Italy, where I swear the stairs were originally built for donkeys!  Every step was both too deep and too wide for comfort. 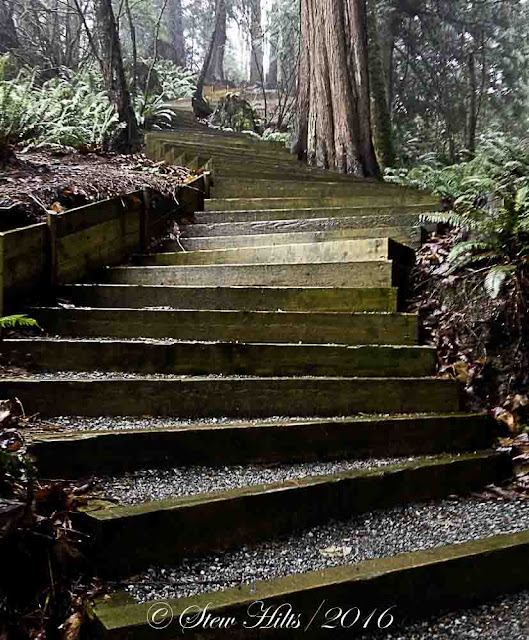 But these stairs seemed to be perfect all the way up, and the often diagonal steps meant you could choose where to step to be most comfortable.  Like all good outdoor stairs, they're fairly wide and shallow individual steps.  They're obviously fairly recently built, but there didn't seem to any disturbance of the slope; they just fit right in as if they belonged there. 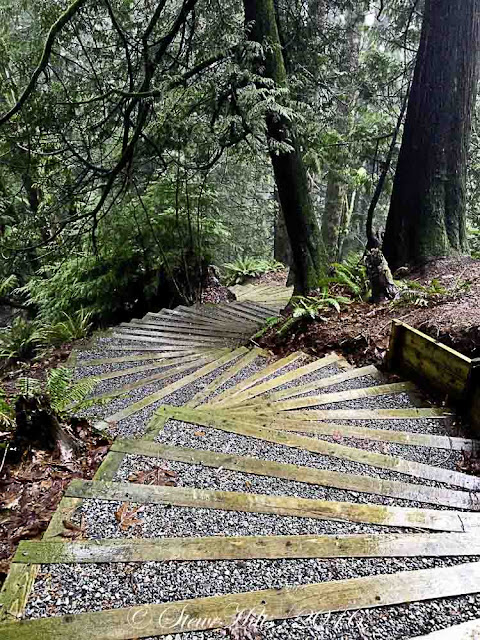 Not only that, but they were really attractive, especially looking back down the trail.  When have you seen steps built like this! 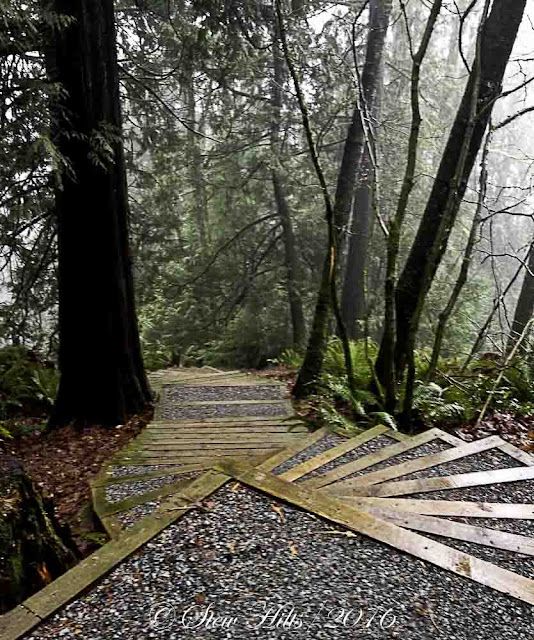 And they were very well built.  Not a loose step or board in the bunch.  And the combination of 4x4s for the edges and gravel in the step made for good footing, critical in a rainforest where wood would get slippery over time. 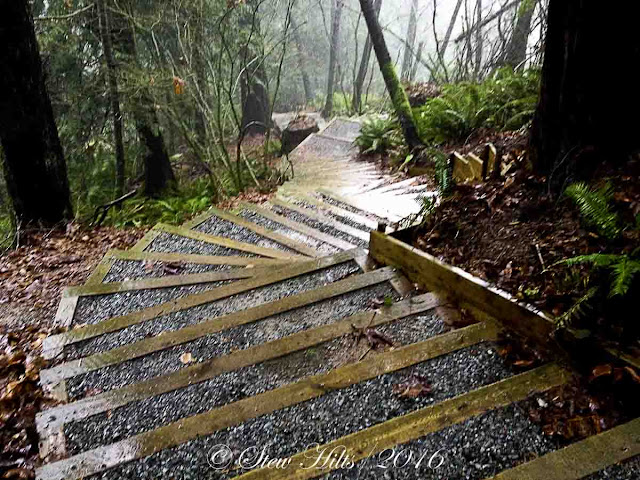 The best part was that I made it all the way to the top without ever getting seriously out of breath!  I did stop briefly a few times (to take the photos - all on my iphone), but it wasn't nearly as hard as I was expecting.  As I said, the best trail stairs I've ever walked up.

For anyone local who might want to walk the trail in either direction, check the map from yesterday's post to see where the stairs are to be found.  The tiny cul-de-sac at the west end of the subdivision is Tom Thompson Court, off Auguston Parkway South.  You can access the steps from an obvious path along the north side of the cul-de-sac.

I can't advise you which way to hike the trail.  I only walked it going downhill, but I did go up the 324+/- steps, and it wasn't that bad (as did our 6 year-old grandson).  On the other hand I suspect that walking down the stairs and up the trail would feel like a relentless uphill slope by the time you finished.  I walked from my daughter's home to the east trail entrance, down the trail, up the stairs, and back to the house in 50 minutes, in the rain, but stopping to take a few pictures.  I'd walk it every day if I lived there!

Tomorrow, the rest of the trail.