Bronte and a Big Dog!

Well, I'm scraping the bottom of the barrel to find photos to post about.  I'm going to have to go back to before Christmas, and even before the big snow.  But in the meantime, we were in Bronte, now a suburb of Oakville, for Boxing Day, visiting Mrs. F.G.'s 96-year old mother.  I was trying to get my walk in and find some fresh air, so I walked down to the waterfront. 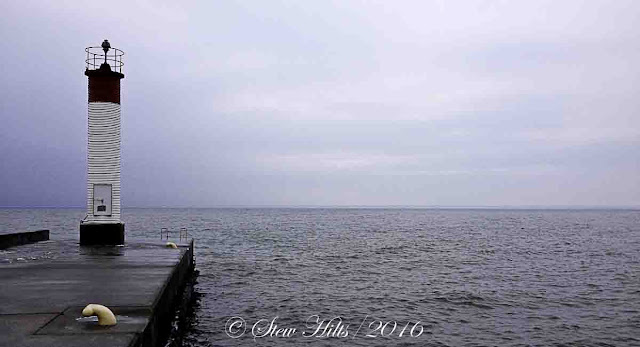 The harbour is totally devoid of boats now, but in summer it's a very popular sailing area on the shore of Lake Ontario, with two crowded marinas.  Today it was just grey, all the way to the horizon. 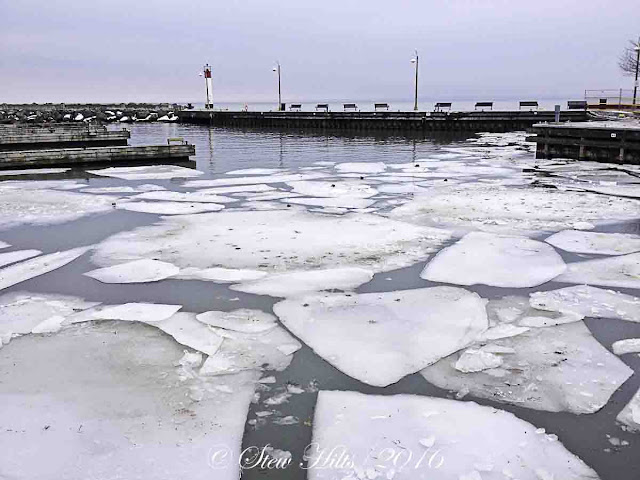 It was that mild day in our crazy weather, but it had obviously been frozen, the ice floes still floating in among the docks. 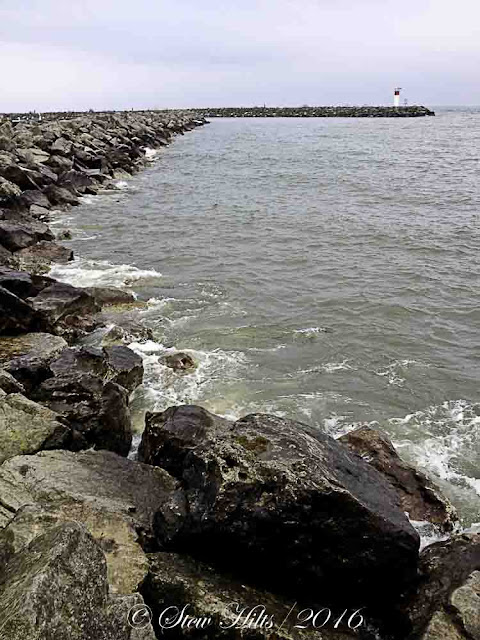 Part of the harbour makes use of 12 Mile Creek, but the new outer harbour has been created by large breakwalls made of huge limestone boulders.  It was a pretty peaceful day on the lake. 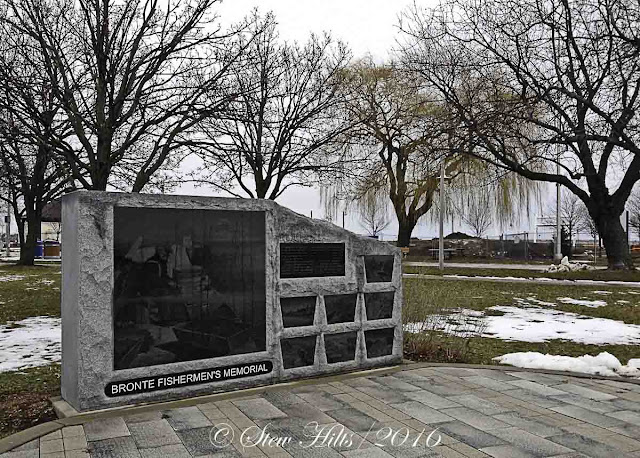 There's a nice area of walkways, benches and open space beside the harbour and the creek mouth.  But I was surprised for just a moment to find a Fishermen's Memorial.  It only took a few seconds in my mind to realize that 'of course, Bronte was once a fishing village'.  That led me to read a little history.

Bronte's harbour was used for the flourishing lumber and wheat trade in the early 1800's, until that trade collapsed when the Grand Trunk Railway opened in 1856.  Then commercial fishing took over, with small boats fishing for lake trout, herring and whitefish which were packed in ice and shipped to cities like Hamilton, Toronto and New York.  Those fisheries collapsed in the 1950's.  The memorial is more a celebration of that commercial fishing heritage than a memorial for lost fishermen, though some did lose their lives out on the lake.

Today the former Bronte village would be totally unrecognizable to an earlier resident.  The original commercial buildings that we find downtown in all the small towns we visit have been completely obliterated here, replaced by modern multi-story condos and a mall or two.  A yuppified replacement for a formerly active fishing village. 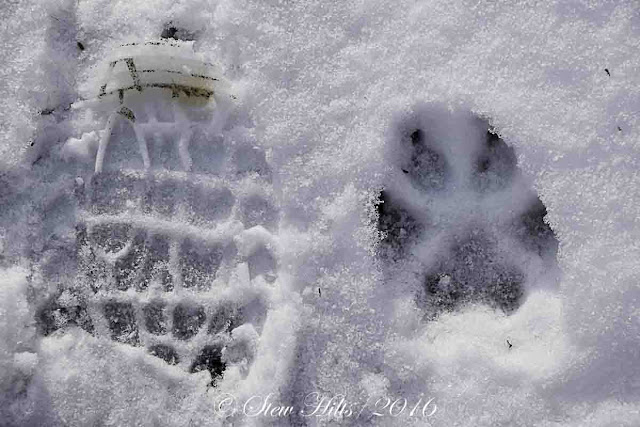 Meanwhile, back on the ranch, we woke up one morning last week to see some unusual tracks where an unknown animal had romped across our yard.  Eventually, after coffee and dog walk and breakfast, I went out to see what they might be.  This is one of the tracks, beside the front half of my own boot track. 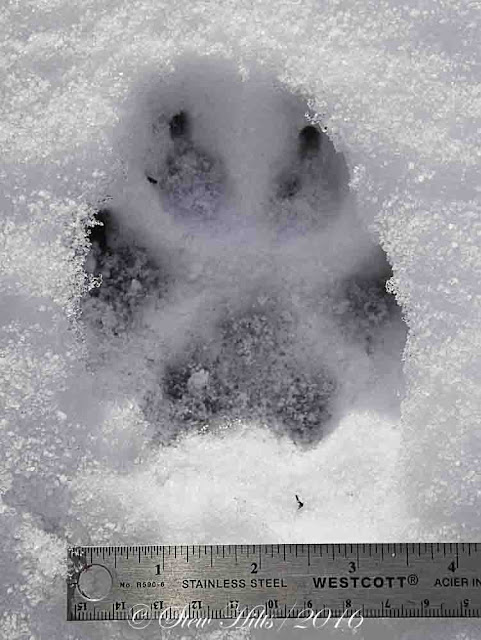 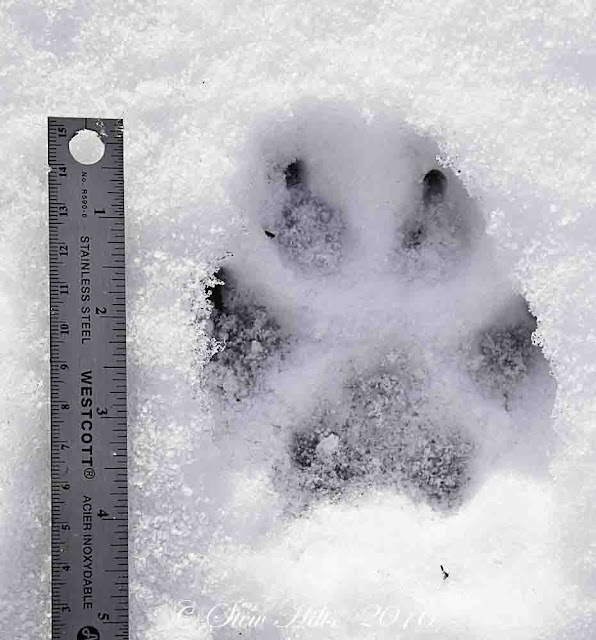 These were absolutely enormous tracks, obviously not deer, but a member of the dog or cat family.  They were 3.5" wide and 4" long, considerably larger than our own dog's paw prints.  So I dug out my Field Guide to Animal Tracks.  I quickly learned that tracks of members of the cat family (like Bobcats, Lynx or Cougars) don't show their claws.  This was a dog family track; you can see the two front claws.  So I checked them against Coyote and Wolf tracks.  Well, we don't have Wolves here, and Coyote tracks are actually considerably smaller, rather like dainty dog tracks in fact.  So this is likely just a big dog that went wandering through in the night.  We do have some new dogs in the neighbourhood; I'll be watching. 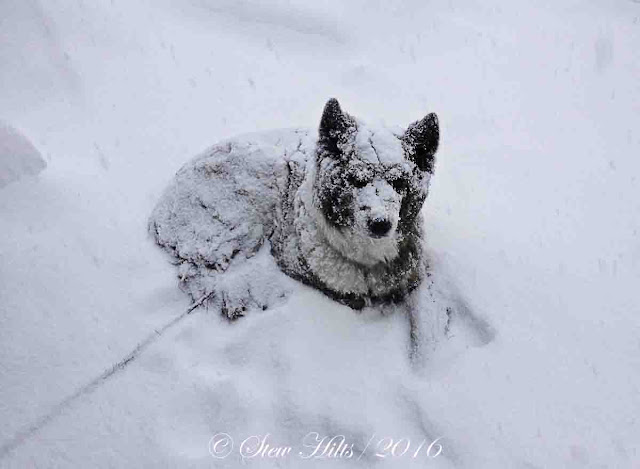 Here's our own dog Roxie during the heavy snowfall of the big storm last week.  I think she must be part Husky; she just loves the snow!