We really enjoyed our week in Abbotsford, and exploring some nearby places in the Lower Fraser Valley.  I've got lots of adventures to share from only 6 days, hope you enjoy them.  I'd like to start out by sharing a few general pictures of that valley, so different from the Beaver Valley here. 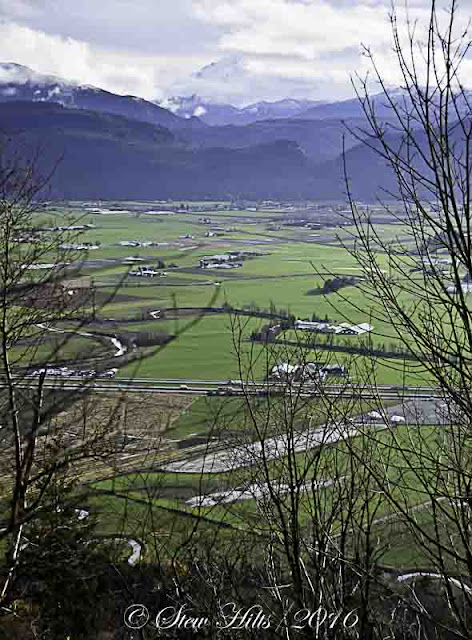 This is the view from near the top of McKee Peak, one of the foothills of the Coast Range, near where our daughter and her family live.  I went for a hike here with my son-in-law and grandson.  You can see the Cascades in the distance (mostly in the U.S.), and the extremely flat valley still mostly in farms, with the Trans-Canada Highway behind the trees. in the foreground. 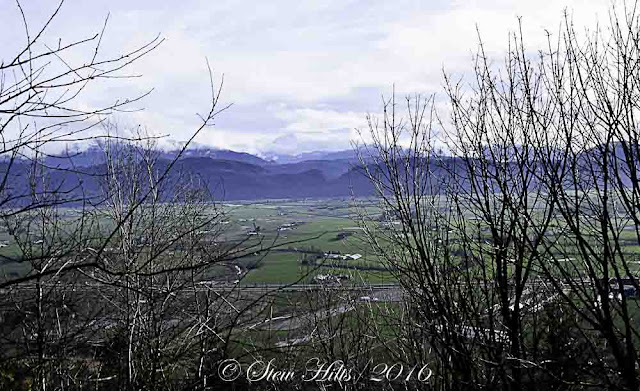 B.C. created an Agricultural Land Reserve protecting all the good farmland in the province in 1973, at the time the most progressive land use planning legislation in North America.  Remarkably, only an hour east of Vancouver, the farmland is still farmland! 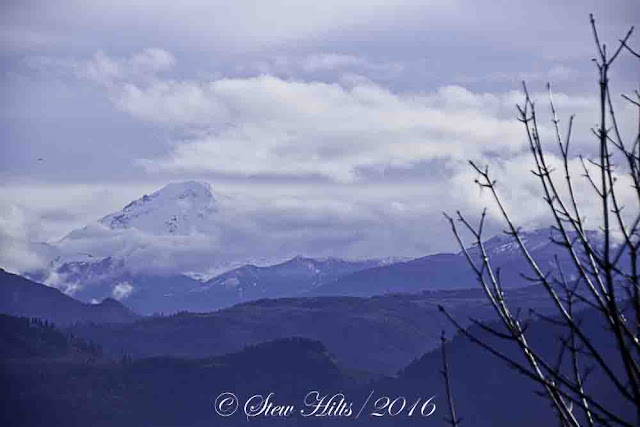 And did you spot Mount Baker in the distance in the photos above?  This was almost the clearest view we got of it, one of the iconic tall mountains in the northwest U.S.  November is the rainiest month out here, and it has been the rainiest fall in memory this year, so we hardly saw the sun at all during the week we were there - but the rain didn't slow us down much! 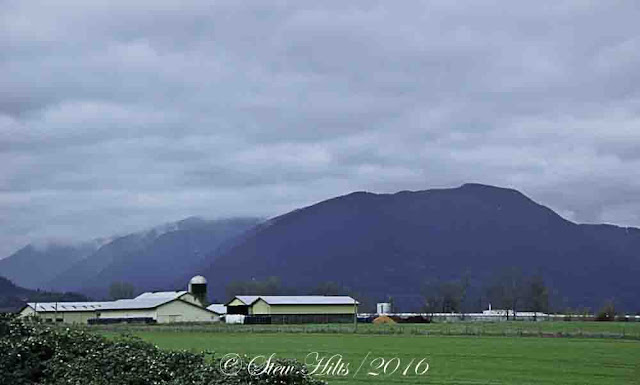 What strikes me about the valley is how the flat farmland ends abruptly at the mountains.  To the southeast of Abbotsford is the Cascade Range, and to the north is the Coast Range.  This is Sumas Moutain, an outlier of the Coast Range; our daughter and family live up on the slopes just out of sight on the right. 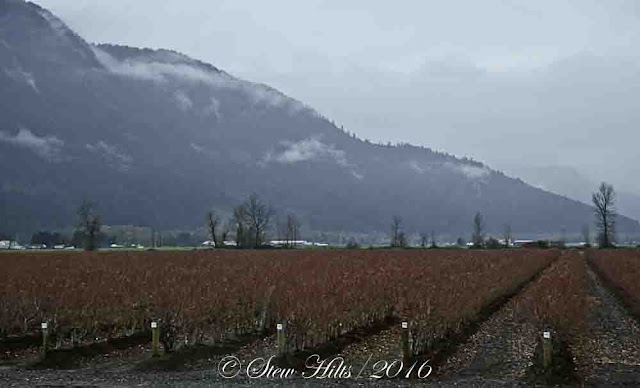 I was amazed at the number of berry farms - especially blueberries.  They're bare at this time of year, and the twigs bright pink.  We're definitely going to have to get there during berry season! 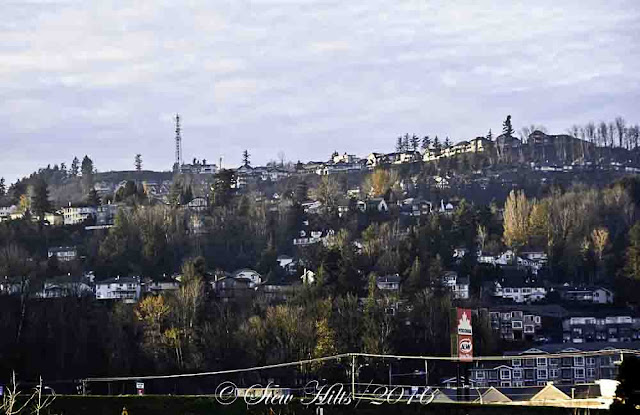 In order to protect the farmland, lots of the urban development marches up the lower slopes of the mountains like this.  It gives very interesting houses - our daughter's front door is in the basement, the back door is on the main floor, and the garage is nearly at the height of the second floor!  Hills everywhere, but it works, and they can buy lots of local food at the farm outlets.

The part of Sumas Mountain known as McKee Peak hides the view of Mount Baker, but from their living room window you can just glimpse the Cascade Range over the rooftops of the houses across the street. 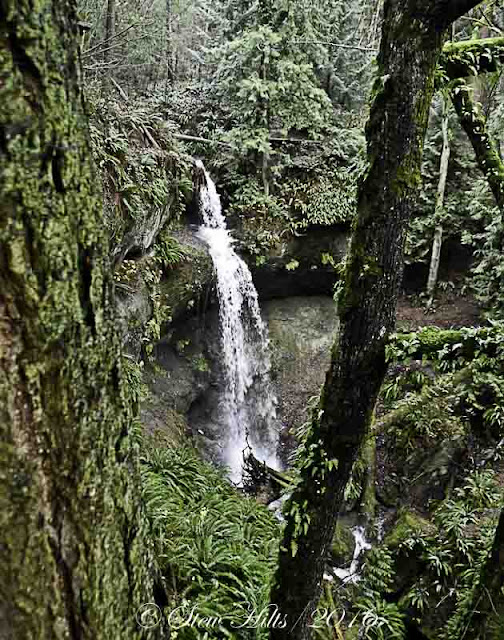 Most of what I have to share with you is from our hikes.  We were out every day someplace, usually to places they haven't had a chance to explore yet (they've only been there 3 months). 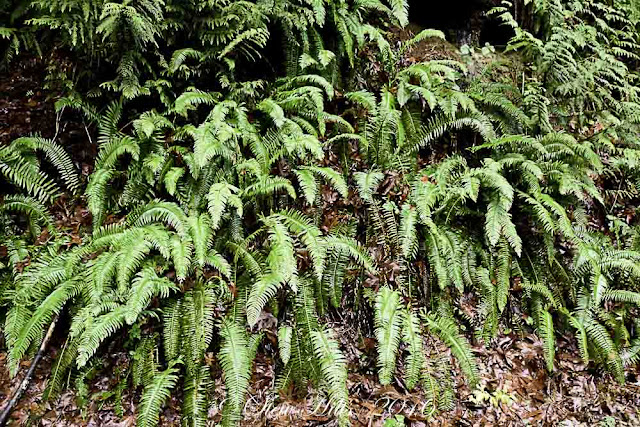 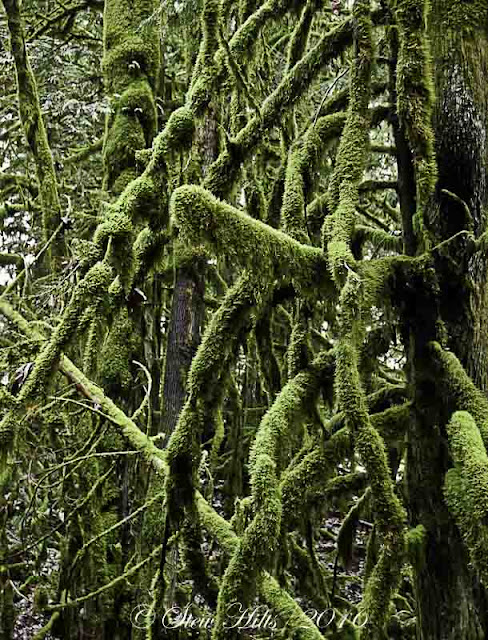 They said it was rainforest, but I didn't understand until I saw it.  Ferns and moss everywhere!  Thick layers of green moss covered all the deciduous branches of all the trees.  It was SUCH a different place for me to explore and learn about! 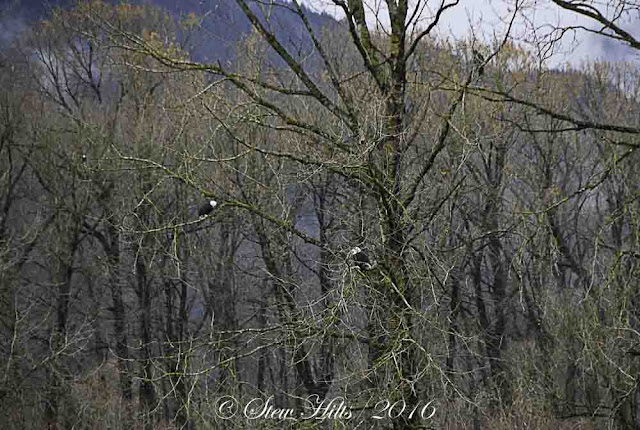 We saw a surprising number of Bald Eagles.  Notice the pair sitting close together here, on the banks of the Harrison River. 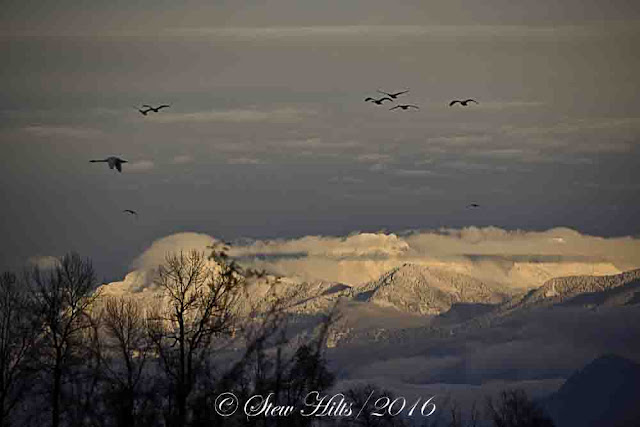 There were Swans on the fields; these are Swans coming in to rest for the night.  Sorry, I don't know anything about B.C. birds yet, so I'm not sure which species they are. 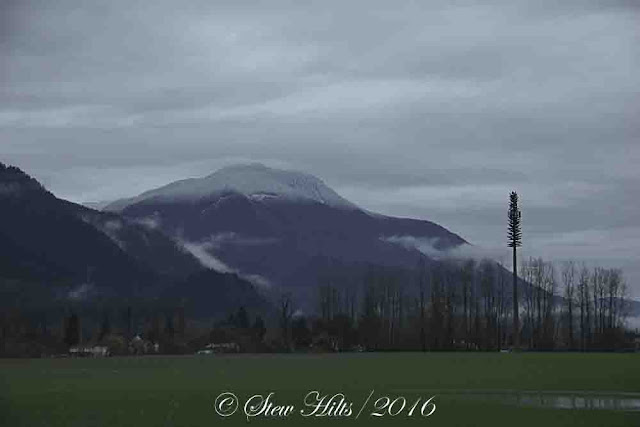 The temperatures were cold enough that there was fresh snow on the mountain tops, but it was just cool and wet where we spent our time.  The snow line is really clear though; elevation makes such a difference.  Notice the unusual tall narrow tree on the right - a disguised communications tower. 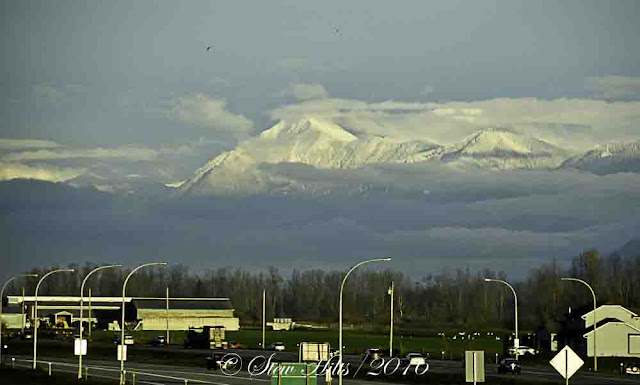 A final view of Mount Baker to the south, on our last day there - my best picture of it.  Our daughter and her husband have accomplished a lot in 5 months, from their trip out in July when they ended up buying a house, to selling their own house a week later (!), through the packing to the actual move, and our son-in-law starting a new job while our grandson started at a new school.  It was a dream, but it worked!!  Lots more to come.