The lower peak of Sumas Mountain nearest to where our daughter lives is known as McKee Peak.  It has a number of mountain bike trails, though finding a map is a challenge.  But our son-in-law, grandson and I all headed out on the next afternoon for a walk. 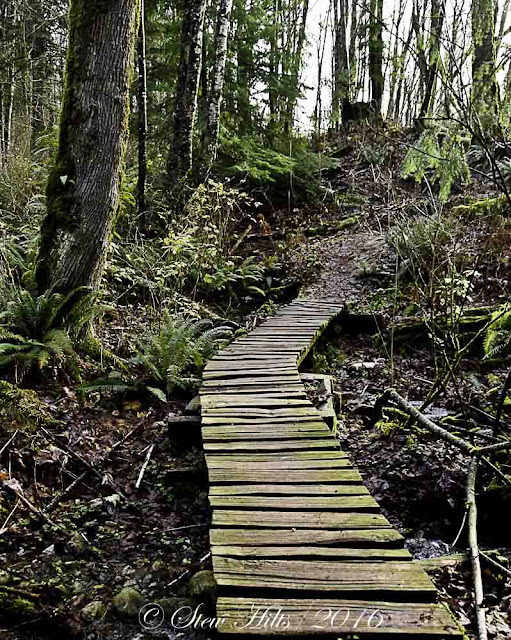 We just parked at the end of a street, Treetop Drive I think it was, and followed a path into the woods, up the slope.  At first it was pretty easy walking.  Mountain biking volunteers have done work on the trails that help carry you past the difficult parts.  I was glad the boards on this bridge were rough split cedar; 2x4's would have been treacherously slippery. 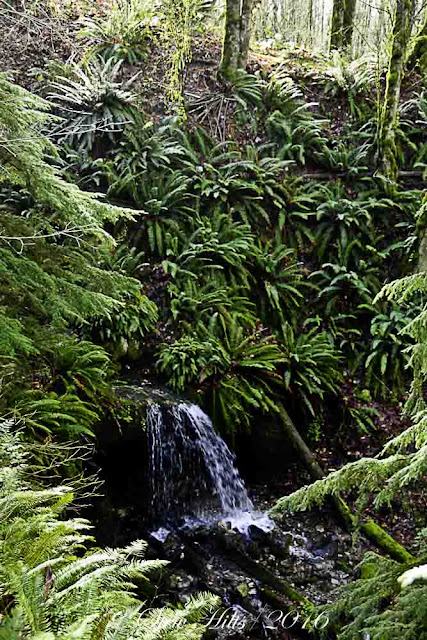 We came upon a tiny waterfall - not the one we were looking for, but interesting.  And lots more of the big Sword Ferns, here on the walls of this ravine. 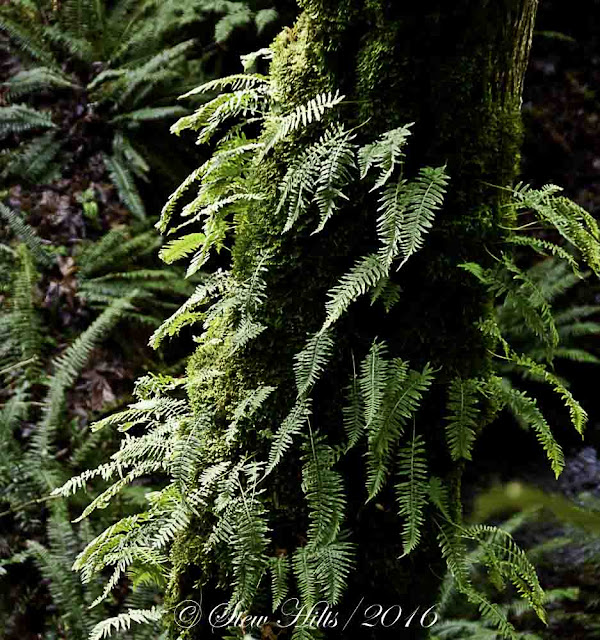 And here I started seeing smaller ferns growing straight out of the moss on the tree trunks. 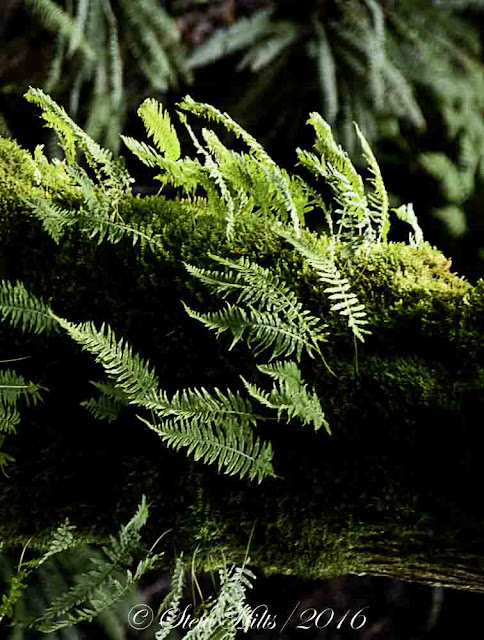 These ones are growing out of a huge fallen log.  Based on the small field guide I was able to pick up, I think this is Licorice Fern, Polypodium glycyrrhiza, known to be an epiphyte.  Epiphytes are plants that grow on another plant, gaining their nutrients and water from the air and rain, but not harming the plant they're growing on. 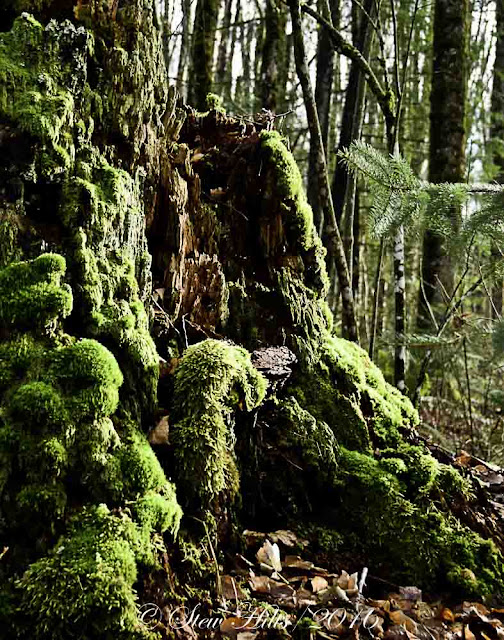 The moss on this rotting stump was glowing bright green in faint sunshine. 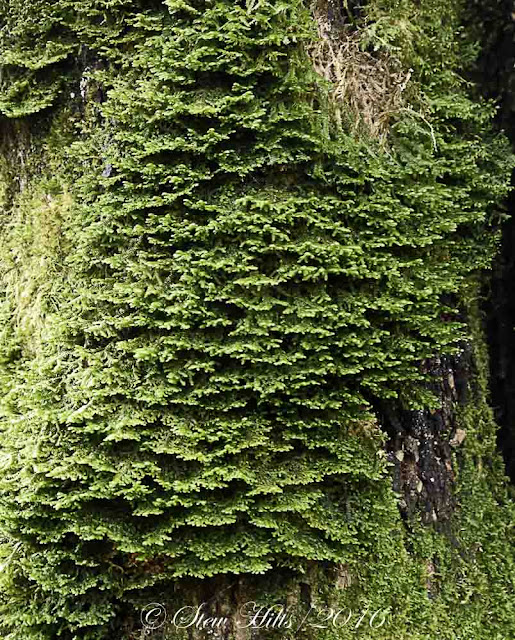 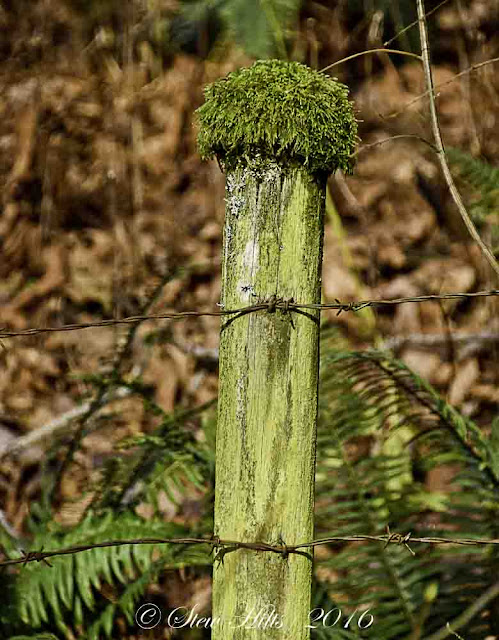 Our grandson liked the moss 'caps' on a line of fenceposts we came across.  Part of this land is still grazed by cattle, though compared to pastures here I couldn't believe it! 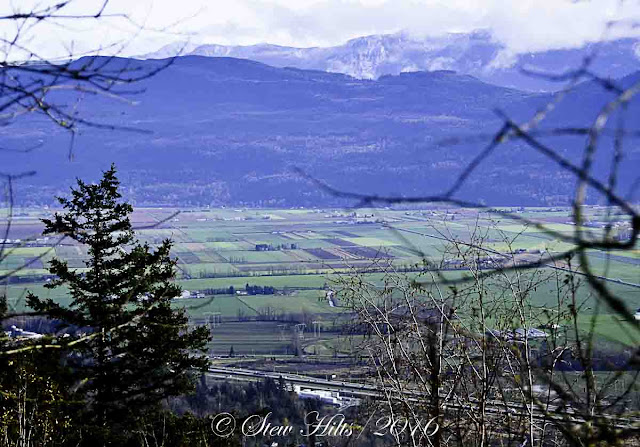 We did come out to a viewpoint, but it was on a very narrow footpath along a steep slope at the top of a cliff, so we satisfied ourselves with a look through the trees - here across the Fraser Valley, the Trans Canada Highway in the foreground, and the Cascades on the U.S. side of the border in the distance. 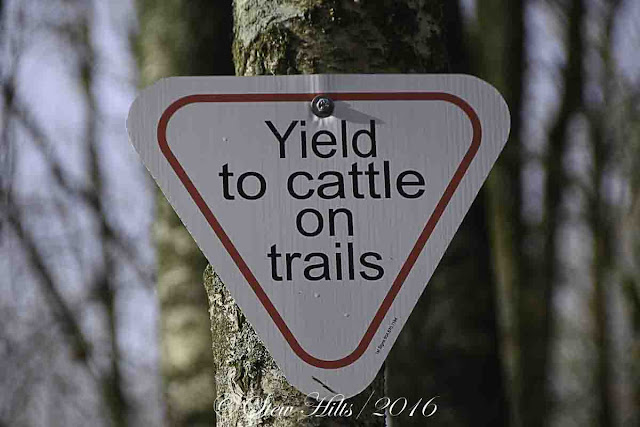 Don't ask me how.....!  These are narrow trails through dense woods high up the slopes above the suburbs. 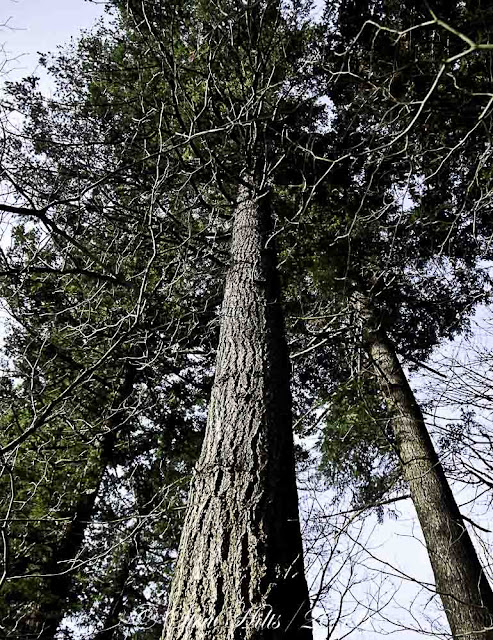 As we headed back downhill on another trail, we came to an area of quite large trees in a more mature forest.  I think this was a Western Hemlock.  I've got so much to learn.... 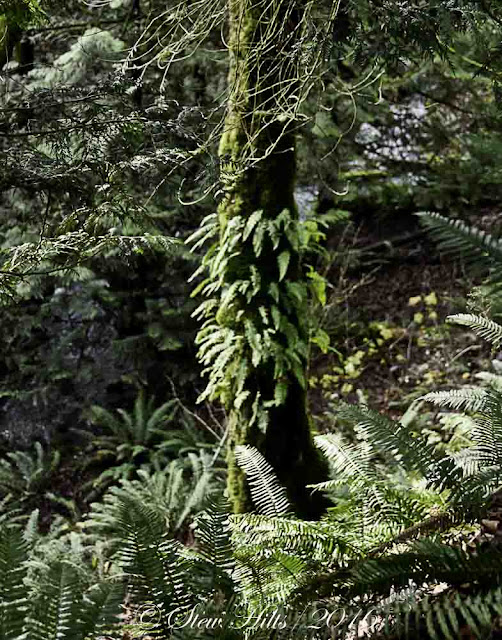 Eventually we went past that little ravine again, past the fern tree, and back to the car.  A good challenging outing.  I was tired, but I doubt if our grandson was even worn out.