Fathom Five National Park is known for its clear waters and shipwrecks, among the islands off Tobermory.  It claims to be the diving capital of Canada, and is certainly the most outstanding freshwater diving area, one of the best such in the world.  There are a wide range of wrecks, nearly 30 altogether, from easily visible to much deeper, suitable for everyone from novice to advanced cold-water divers. 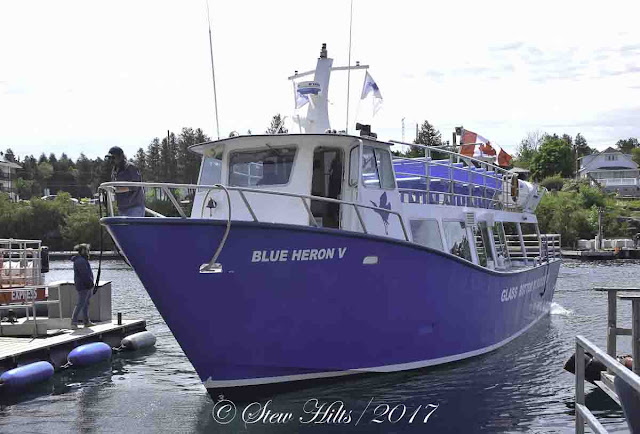 We waited at the Blue Heron dock for our cruise boat, and headed to the upper deck immediately.  It was only about half full, so no problem.  We were headed to Flowerpot Island. 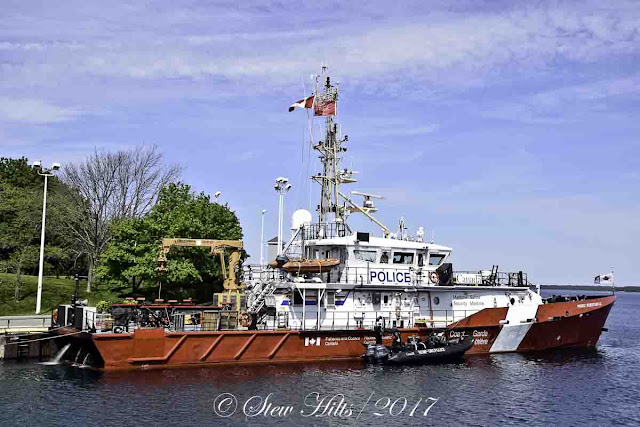 Heading out of the Little Tub we passed yet another Canadian Coast Guard ship, this one the much larger Private Robertson V.C.  Named after Private James Robertson who was awarded the Victoria Cross in WWI, it was built in Halifax, Nova Scotia.  This ship is nearly three times the length of the Cape Commodore I showed you two days ago, and is loaded with appropriate equipment! 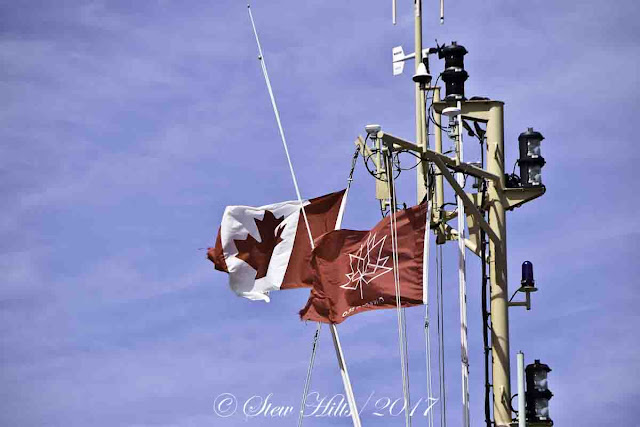 It was flying the Canada 150 flag as well as the Maple Leaf.  This is the first of the CCGS Hero-class patrol vessels, only launched in 2012, and based in the Great Lakes.  It certainly gave the impression of being a serious police patrol boat, much larger than the Cape-class ships, of which several are based in the Great Lakes as search and rescue vessels.

We headed to port after leaving the Little Tub and curled into the Big Tub, a longer inlet lined with cottages.  Sailing past the Big Tub lighthouse, we went slowly down the bay, a speed limit for boats here. 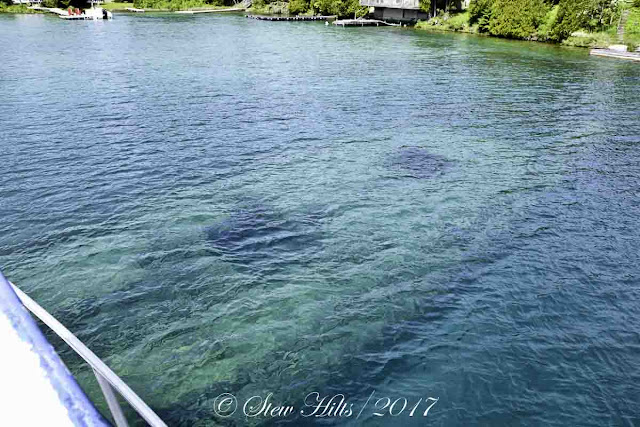 At the end of the bay we crept slowly up on the wreck of the Sweepstakes, said in one article to be the "most beautiful shipwreck in the world".  It achieves that reputation from the crystal clear waters (especially on calm days), where the ship is only 20 feet below the surface.  Looking from above you could easily think you were in the Caribbean. 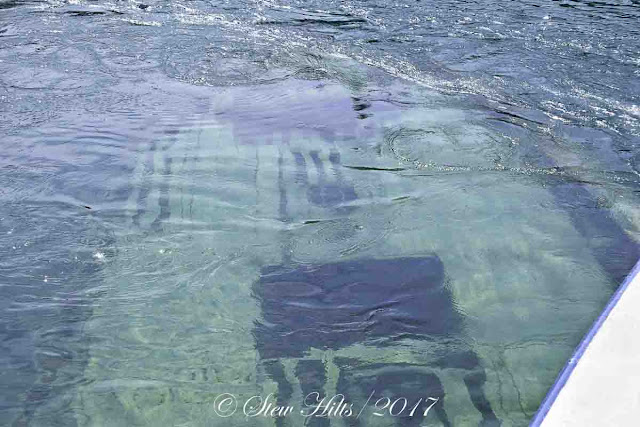 The two-masted sailing schooner was carrying coal in 1885 when it ran aground on Cove Island, the largest of the islands off Tobermory.  A local captain towed it in to the Big Tub in the hopes of salvaging it and its load.  But they decided it was beyond repair and it sank where it now lies. 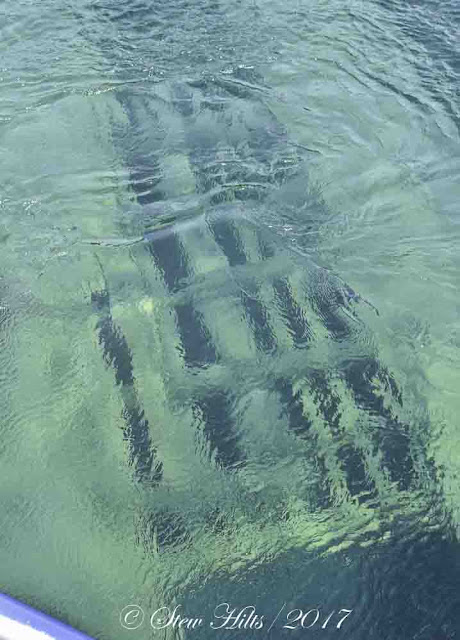 The fact that you can see this shipwreck so easily and so clearly makes it the most popular to visit.  And it's one of the best preserved shipwrecks in the entire Great Lakes (among about 6000).  Google 'Sweepstakes Shipwreck' and you can see plenty of pictures!  the cold waters have certainly helped preserve it. 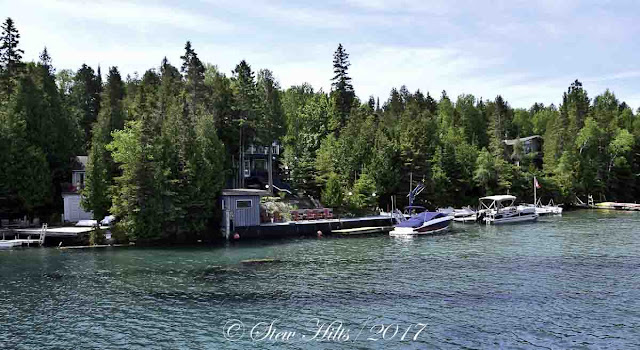 Right beside the Sweepstakes lies the wreck of the City of Grand Rapids, a wooden steamship that sank in 1907.  It was a passenger ship, tied up at the dock in the Little Tub, when it caught fire.  In those days, it was towed out into the outer harbour to burn itself out, which it did.  But an east wind then blew the wreck into the Big Tub, where it finally grounded in shallow water at the head of the bay. 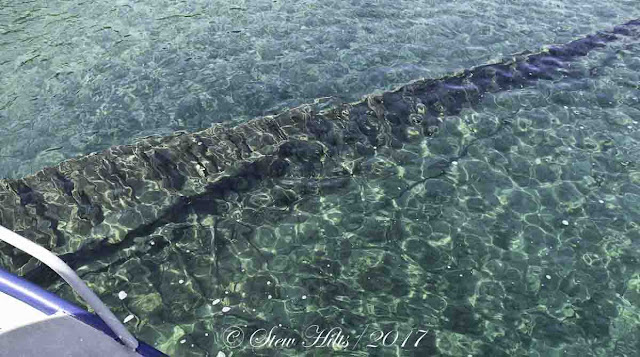 Because this ship burned to the waterline, and then sank in shallow water where winter ice could damage it, only the bottom timbers of the hull remain as a wreck, along with some iron parts, unlike the nearly intact Sweepstakes. 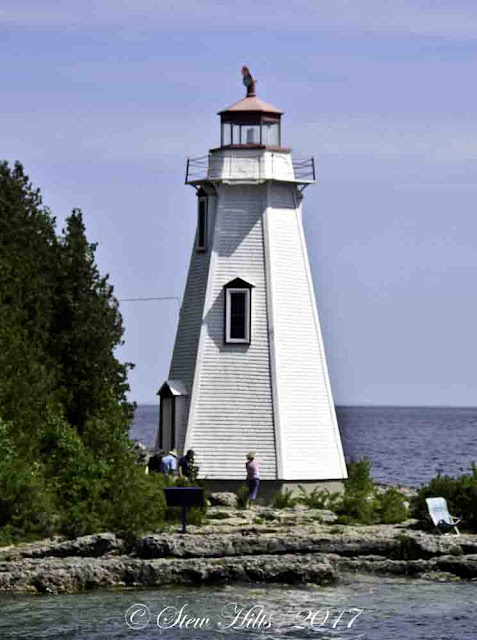 We really enjoyed seeing the shipwrecks, and I enjoyed even more reading about them afterwards as I prepared this.  I had no idea the Sweepstakes in particular, was so unique.  There are nearly 30 shipwrecks in the area altogether, several others fairly intact, though deeper.  Divers with the skills and experience have a wide choice of where to explore.  Meantime, we sailed out back past the Big Tub lighthouse and headed out among the islands.

Tornado Warning!  Tonight we're currently having severe thunderstorms, and torrential rain under very dark skies after a tornado warning an hour or two ago.  We just hope there isn't any severe damage.