We also visited Dorcas Bay briefly one evening, another of our favourite spots up the Bruce Peninsula.  It's on the west shore, very different than the cliffs of the east.  Here the bedrock, covered with sand in the bay, dips into Lake Huron like a very slightly slanted table top, creating a series of unusual habitats. 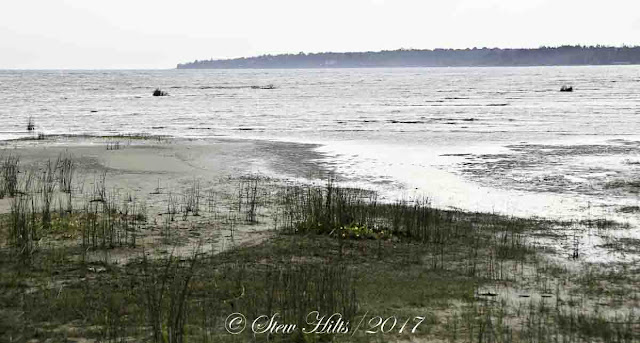 Dorcas Bay dips so slowly into Lake Huron that you can walk out 100 yards and only have water half-way up to your knees. 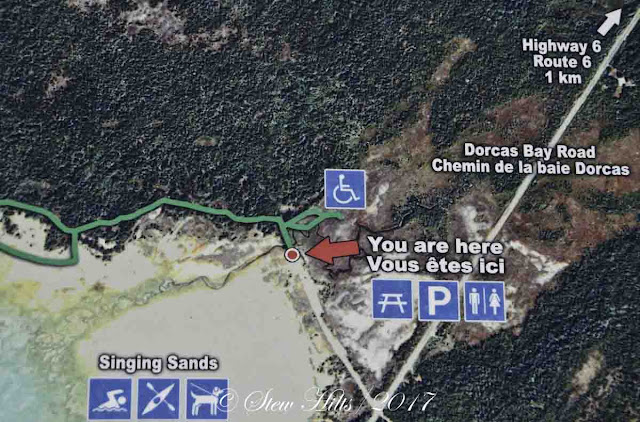 There are three interesting habitats, that show up on this air photo on one of the Parks Canada sign.  There are the low sand dunes along the shore, the Jack Pine forests back of the shore, and the 'fen', the brown area to the east of 'You are here'.  This post is a little long with lots of pix, so just scan through quickly unless you're really interested. 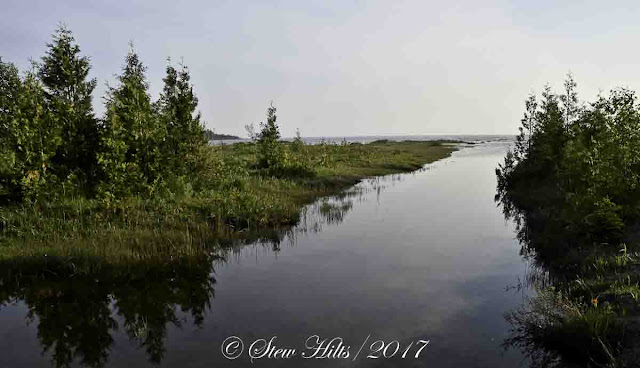 This year the water has risen in the Great Lakes, so what was a narrow sandy stream flowing to the lake is now a deep flooded inlet, what was open wet sand is now shallow water. 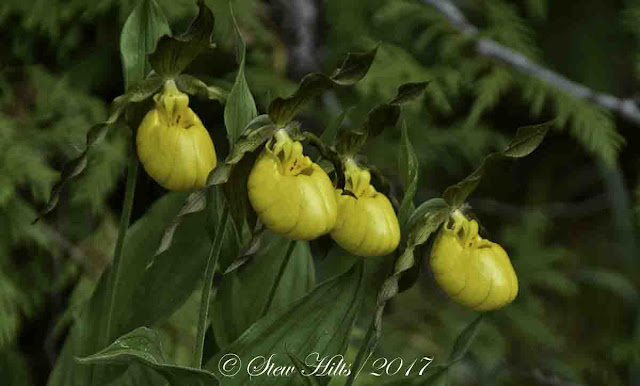 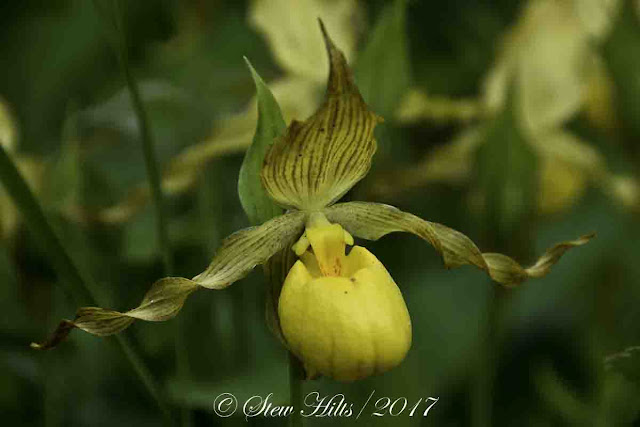 We started taking a quick look in under the forest, where the Yellow Ladyslipper were in bloom, one of the more common orchids on the Bruce.  It was because of flowers like these that the property was saved from development for cottages in 1963, by the non-profit Ontario Naturalists in the 'Battle of the Bulldozer' which raised $30,000.00 to purchase the land from the bankrupt developer.  I first visited this spot the year after, and have been going back ever since.  For a few years I had a hand in its management, but it's now part of the Bruce Peninsula National Park 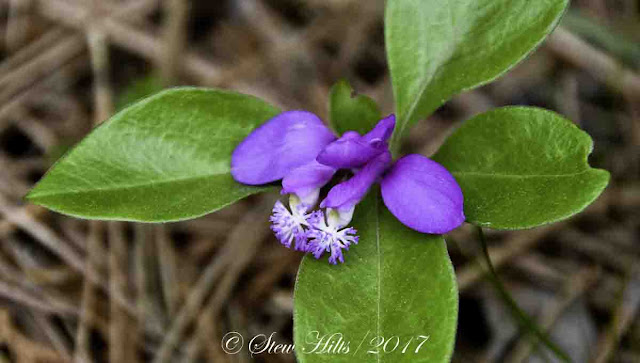 The beautiful little Fringed Polygala was blooming under the Jack Pines. 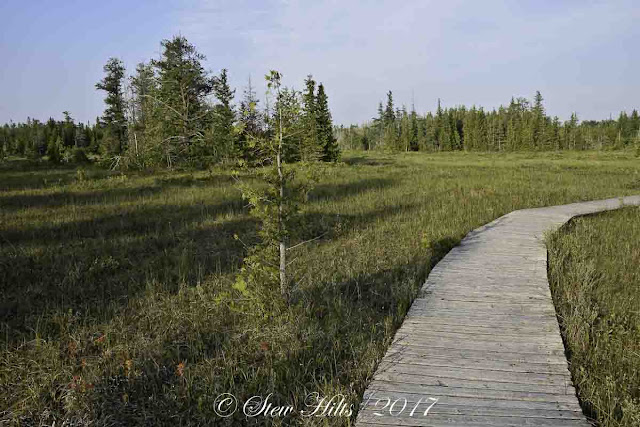 Behind the parking lot is the 'fen', a unique wetland habitat with shallow water and high alkalinity.  It's home to some really unusual plants which you can easily see from the boardwalk. 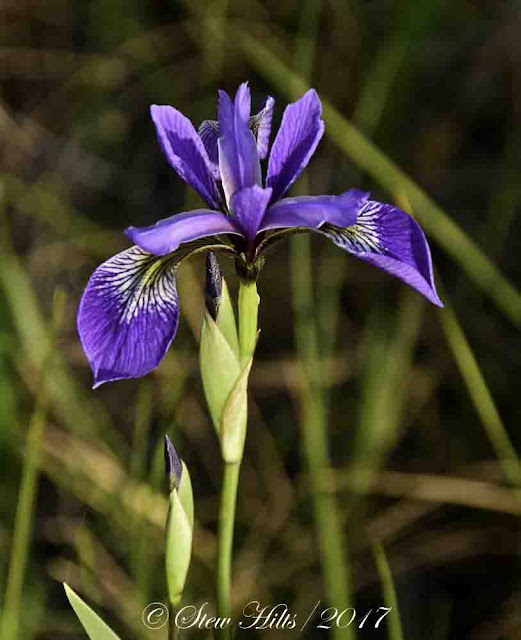 We spotted a few of the Blue Flag Iris.  The much rarer Dwarf lake Iris also blooms here, but earlier, in late May.  Botanists from across the continent visit to see it. 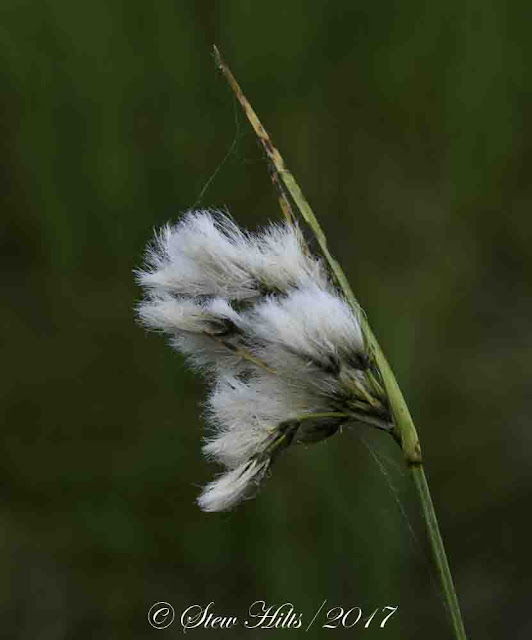 There is also some Cottongrass growing in the back corners of the fen.  Not a grass at all, but a sedge found in this unusual habitat. 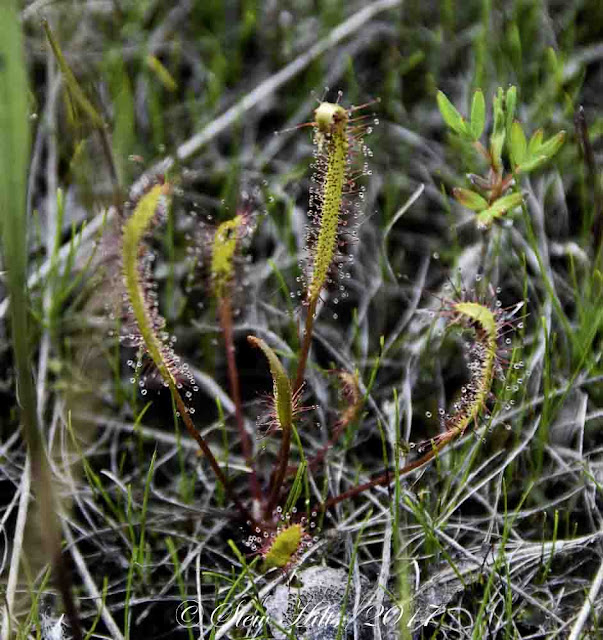 But the interesting plants are the carnivorous ones.  This is the Linear-leaved Sundew, which captures insects among its tiny tentacles, and dissolves them for nutrients. 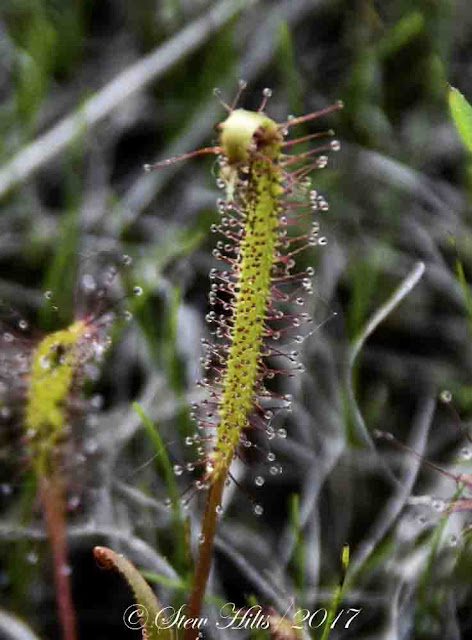 The best close-up I could manage shows you the tentacles and the drops the plant secretes to attract, hold, and then dissolve tiny insects.  Parts of the fen are almost carpeted with these plants. 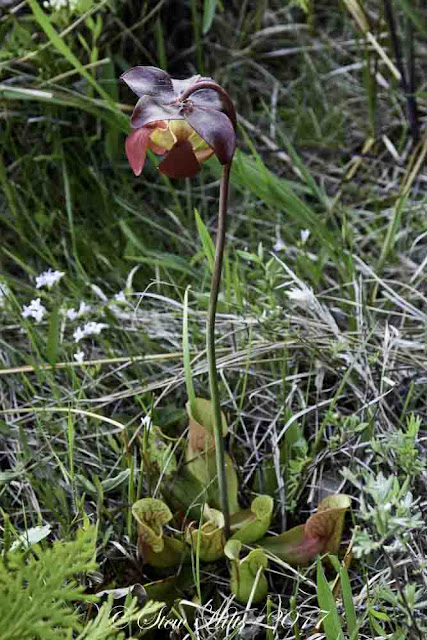 The other carnivorous plant is the Pitcher Plant, perhaps the most common symbol of the fen wetland. 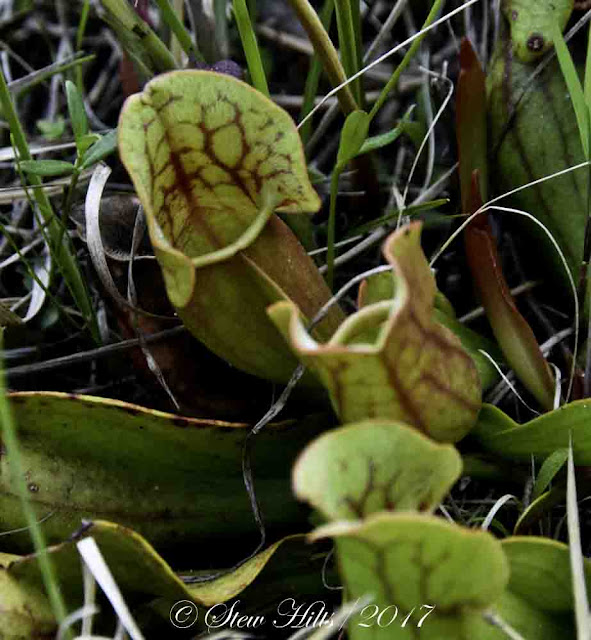 Insects crawl into the 'pitcher-like' leaves, where downward pointing hairs make it hard to crawl out.  Eventually they are dissolved as nutrients too. 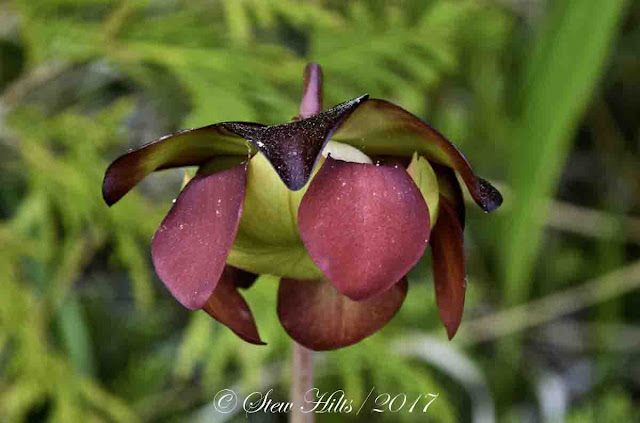 The flower, in full bloom at this time of year, is both unusual and quite attractive, but it faces downward so it's tricky to photograph. 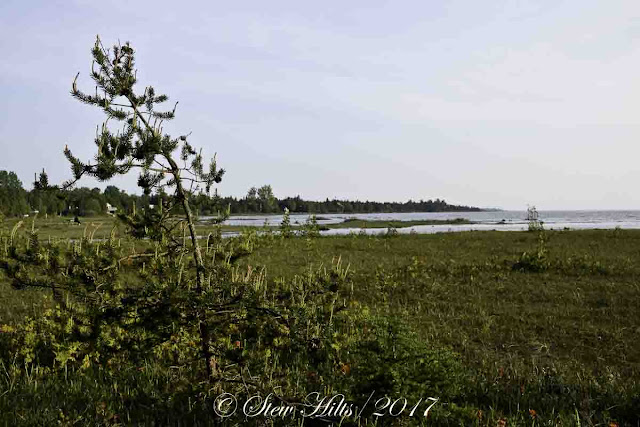 Out on the open shoreline we walked over the wet sand flats at the edge of the Jack Pine forest.  The only place Jack Pine are found this far south in Ontario is in sandy habitats on the Great Lakes shorelines. 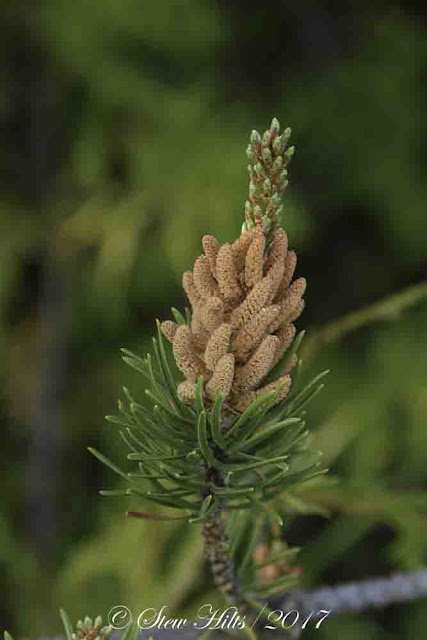 Jack Pine is the pine species that needs fire to pop open the cones to release the seeds, but here on the hot sunny dunes, the temperature (which can rise to 50°C on the sand surface) is enough to accomplish that. 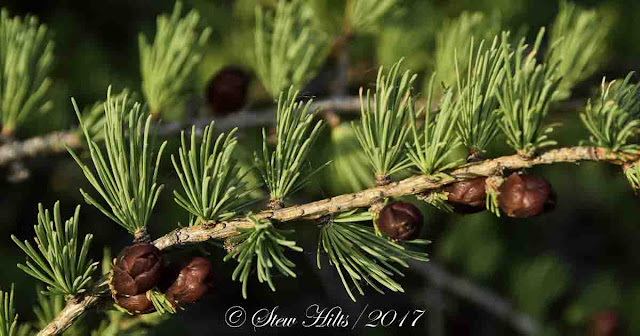 The native Tamarack with it's clusters of tiny needles and tiny cones is also common here.  Not many places you can see a Jack Pine/Tamarack forest in southern Ontario! 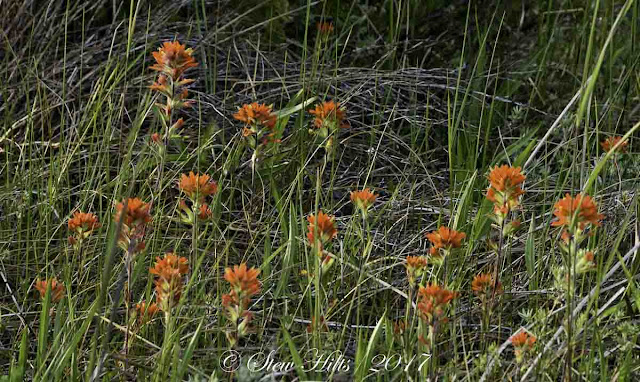 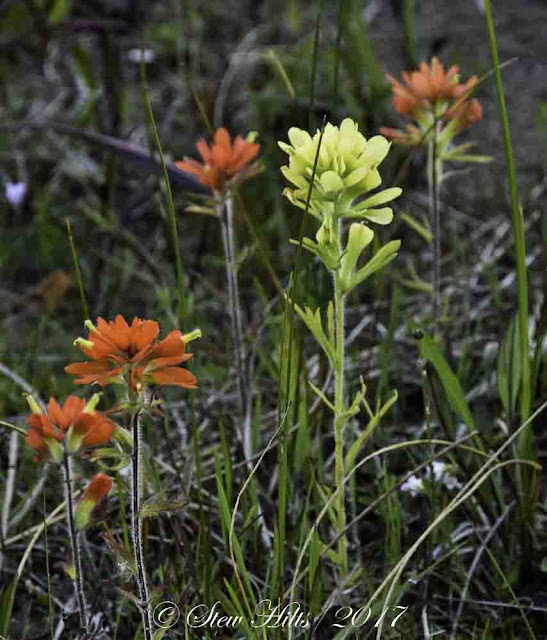 The Indian Paintbrush were glowing in the evening sun.  Usually red, but occasionally yellow.  With that we better quit; if you've lasted this long, thanks for your interest!