Finally, I've got you to Flowerpot Island.  We sailed from the northwest, approaching Lighthouse Cove and the Lighthouse first, then around the corner were the 'flowerpots', and beyond them the dock. 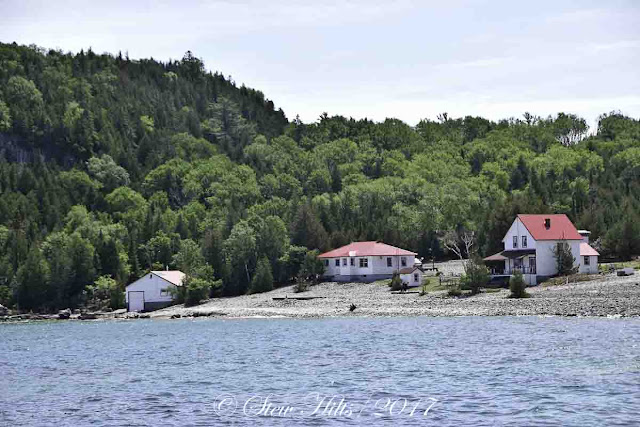 These are the lighthouse keepers' cottages, built over 100 years ago, when the keepers and their families lived a very isolated life here.  Today they are one of the best examples of volunteer contributions to our parks, maintained entirely by volunteers among the Friends of Fathom Five.  One of these is a museum you can visit; volunteers stay in the other house. 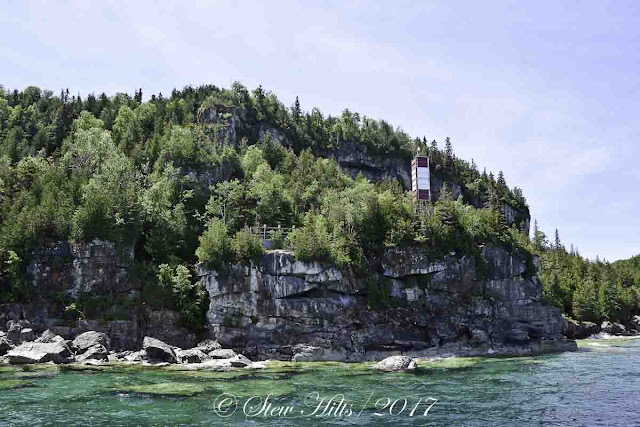 And here is the ugly new light tower, replacing the old lighthouse in 1968 as part of a nation-wide modernization drive, automating many of Canada's lighthouses.  As you can tell, I'm a bit biased. 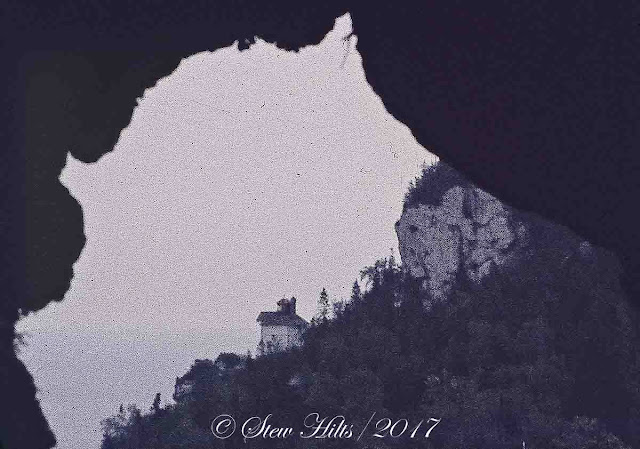 This is a terrible picture, but it's my only picture of the old lighthouse, which looked like a house with a light on top.  It's a scan of a slide that is at least 50 years old (pre-1968), and was taken from a cave entrance across the cove to the west. 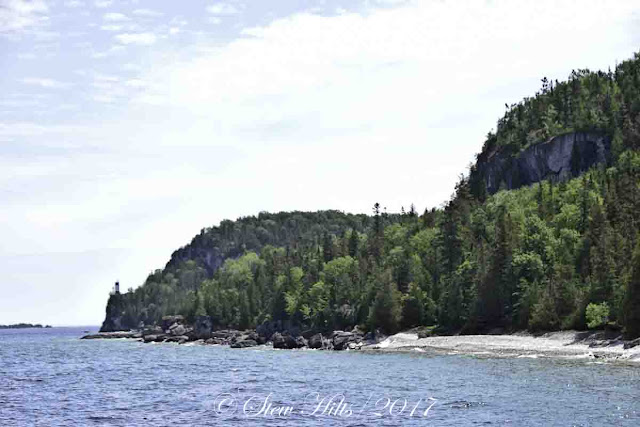 The cliff on the right here has several large caves, one of which frames the photo above of the old lighthouse.  When I first visited you could follow trails to about 8 big sea caves up in the cliff, and we explored them all.  Today, for safety reasons, only one is advertised, and you can only go the entrance of it. 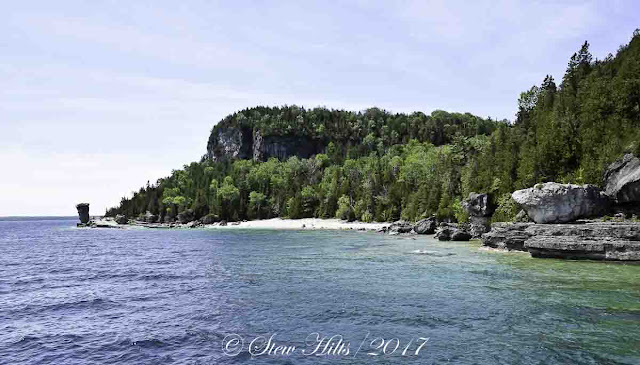 We sailed on around Castle Bluff, and there was the first of the flowerpots, across a beautiful small bay under a cliff with more sea caves.  The caves date from a time when lake levels were much higher. 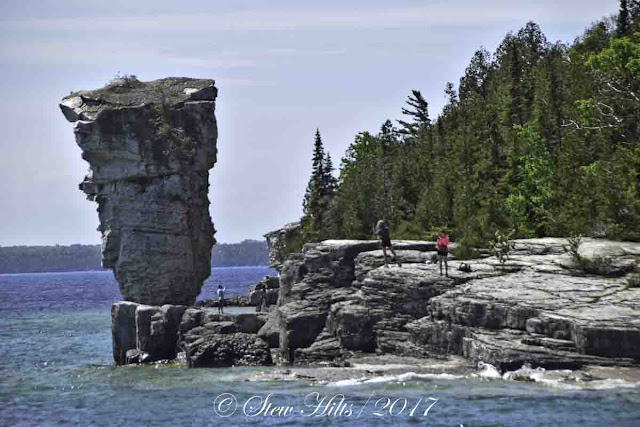 My memory of the island does not include many people, sometimes no-one but ourselves.  But today there are lots of people, many more come July and August.  They do give some sense of scale for the large flowerpot here. 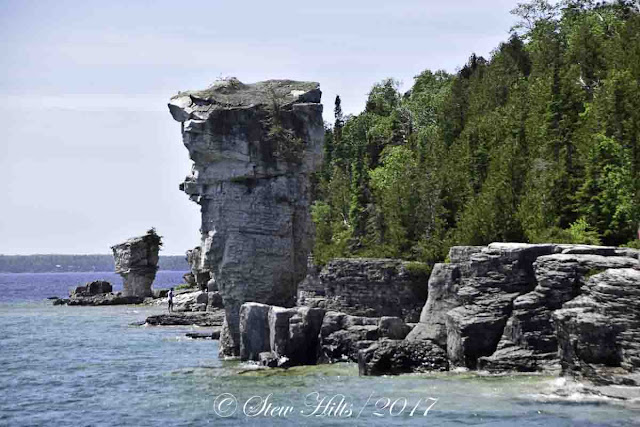 A little further and we could see both flowerpots, sticking up along the very rocky shoreline.  Both have their feet in the water today, but I've known them to be both high and dry, and flooded.  Both flowerpots are seastacks, left standing as softer rocks eroded around them. 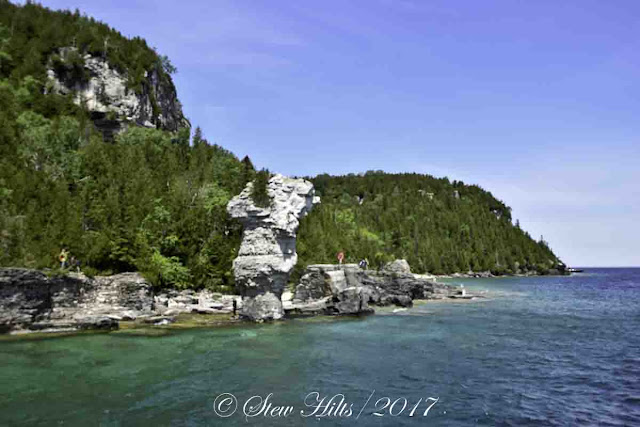 Here you can see the 'witch's nose', a face on the east side of the larger flowerpot. 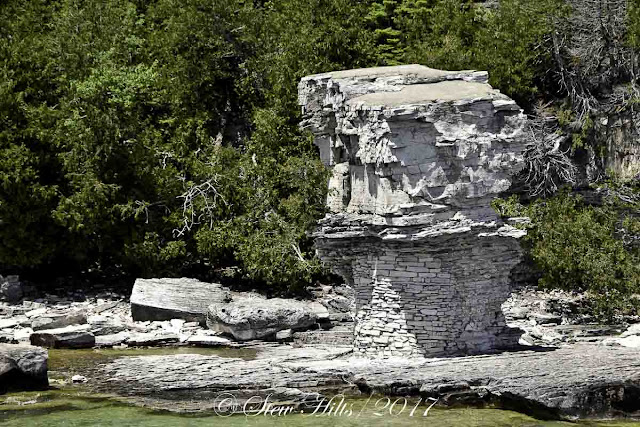 You can clearly see the stonework that holds up the small flowerpot here.  Both flowerpots were reinforced by stonework decades ago, in the 1930's I believe.  Today there would be a debate over whether we should do that!  Flowerpot Island itself was a National Park in its own right for decades long before it became part of the new Fathom Five National Park. 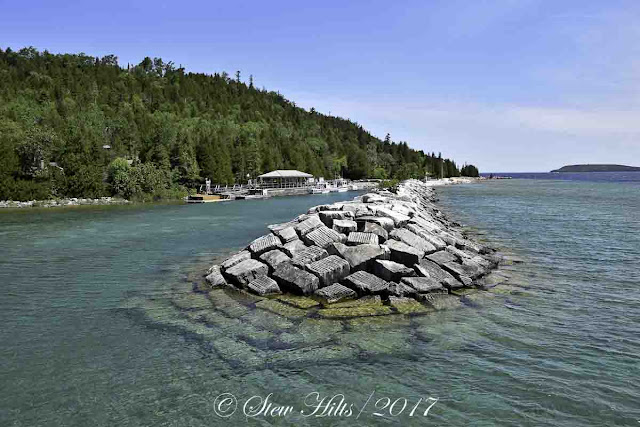 Shortly thereafter we arrived at the dock, circling into Beachy Cove around the big breakwater.  We got off to enjoy a couple of hours exploring the island.
Posted by The Furry Gnome at 9:17 PM