Although we saw lots of beautiful and interesting things on this short trip (we packed a lot into three days!), the biggest difference from home here in Ontario is the ever-present mountains in the distance.  Such awesome scenery compared to our low hills and rolling or flat fields! 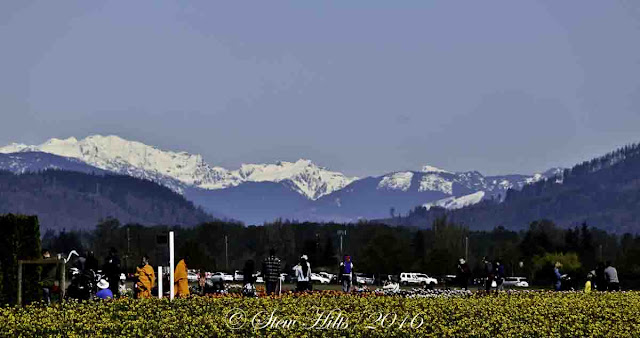 We could see some snow-capped peaks in the distance from the Tulip fields themselves, just west of Mt. Vernon in Washington, but couldn't figure out which ones they are. 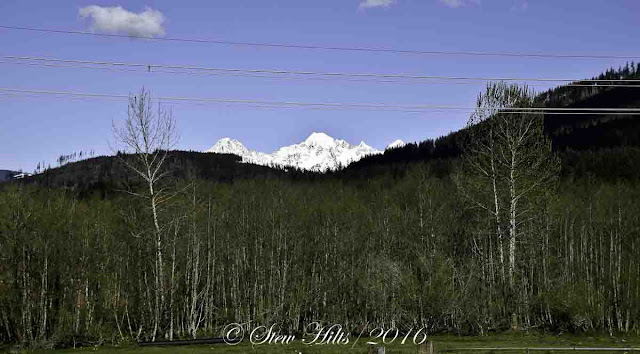 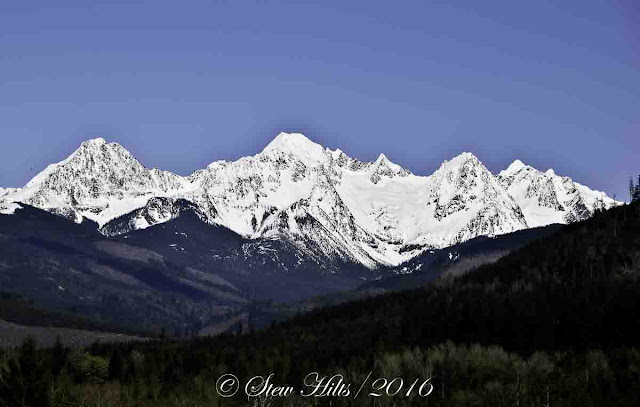 Rather than hitting the Interstate, we wandered east of Burlington to find Hwy. 9.  Then we followed it on the west side of the Cascades, anchored here by Mount Baker, all the way to Sumas, on the border.  The mountains played games, peaking out from behind the foothills and disappearing again, all the way north.  We're looking east here, toward Mount Baker, but I think this line of peaks may be a lower group that shows up on Google Maps as South Twin. 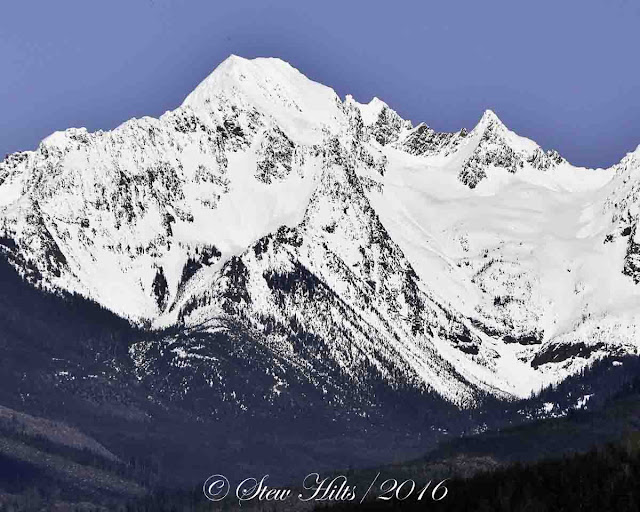 Whichever it is, a close look reveals some pretty steep slopes! 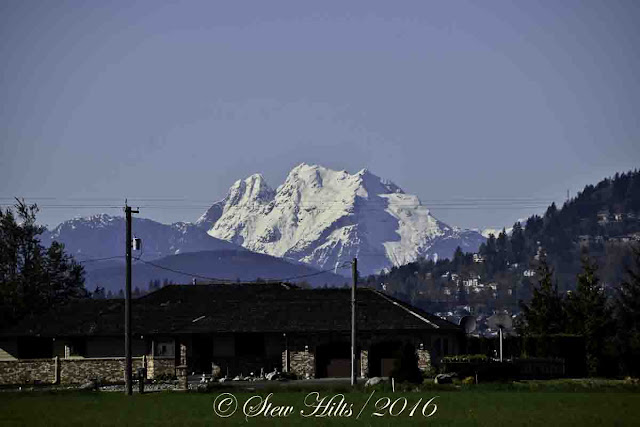 As we neared Sumas, suddenly a Canadian peak appeared in the distance, beyond the slopes of Abbotsford where the houses march upwards.  I think this may be Mount Robie Reid, about 50 km. to the north. 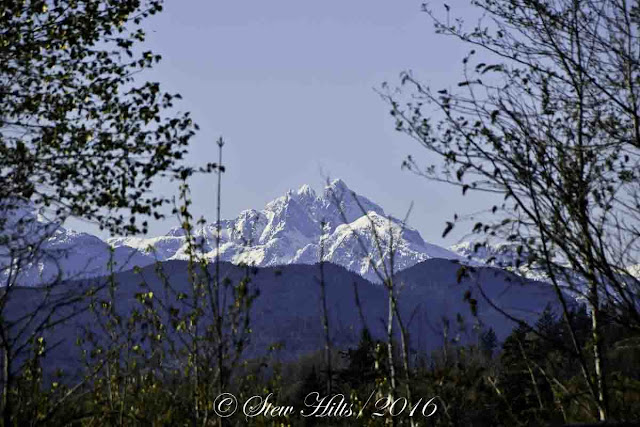 It had been a stunningly clear day; we even had a clear view northwards in B.C., a rare day indeed in our limited experience.  This is another peak, but I'd be guessing if I tried to name it. 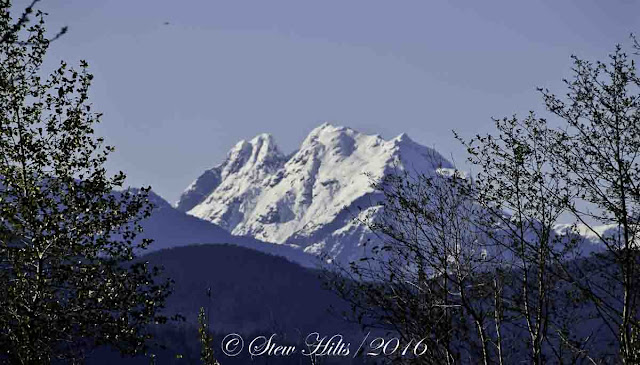 We got almost the same view of Mt. Robie Reid from Abbotsford as from Sumas, just 20 km. closer. 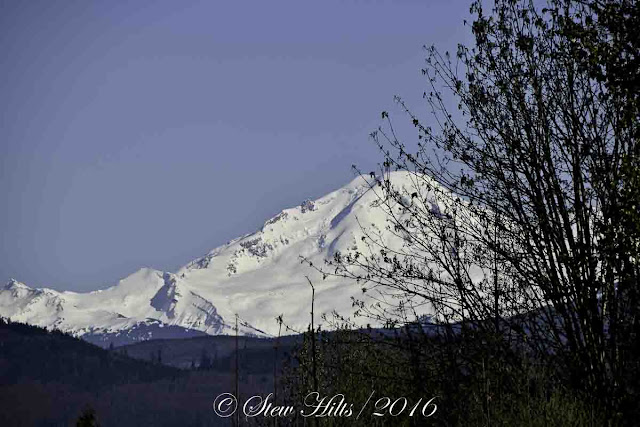 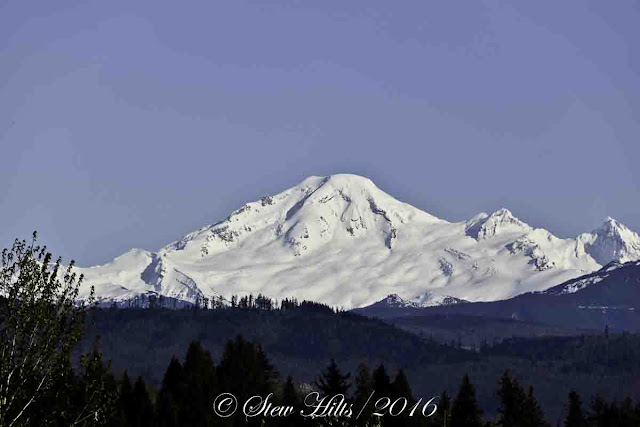 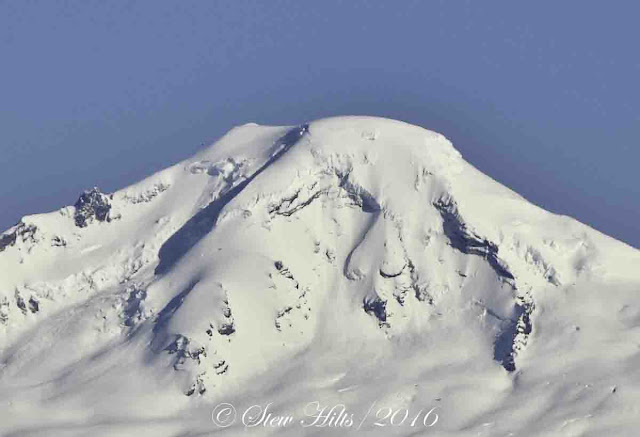 And then we drove downslope to a viewpoint we've come to know, to see Mount Baker on this brilliant clear day.  It looms above the southeast horizon about 40 km. away, and can be seen from many points in Abbotsford.  Talk about a landmark!  Ironically we got a better view of it from Canada than from the U.S. where its located. 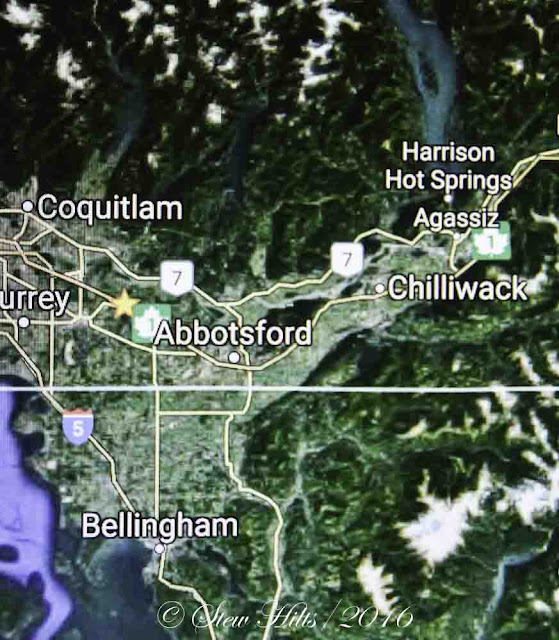 It turns out that it's a lot harder to identify these mountains than I had expected.  This blurry screen shot of Google Maps shows Mount Baker in the southeast, and Twin Peak just to the left of it and south.  It also shows the south edge of a widespread cluster of snow-capped peaks north of Abbotsford in B.C.  Sorting out exactly what direction you are looking, and which peak you're looking at is going to take me some time to learn!