Walking to Beacon Hill Park I passed behind the B.C. Legislature where the Centennial Fountain is located.  This fountain does not celebrate Canada's centennial, but celebrates the union of four colonies that became British Columbia.  Starting in 1862 the Colony of British Columbia was joined by the Colony of the Queen Charlotte Islands, the Stikine Territory, and the Colony of Vancouver Island. 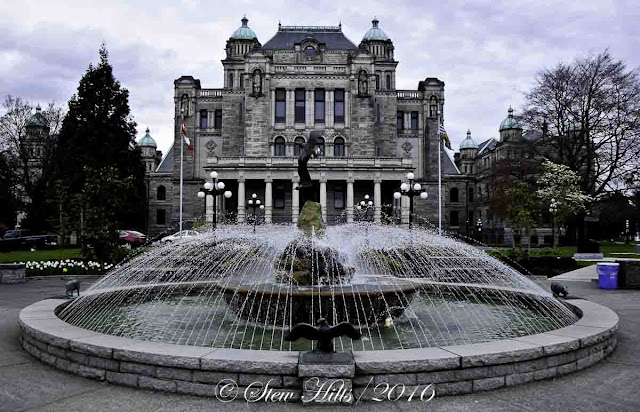 B.C.'s First Nations are represented in this statue by four bronze sculptures around the edge, the bear, the raven, the wolf and the eagle, symbolic of the four colonies that came together to form B.C.  In the centre are otters and gulls, symbolic of the fur trade and the sea, both central to early B.C. history. 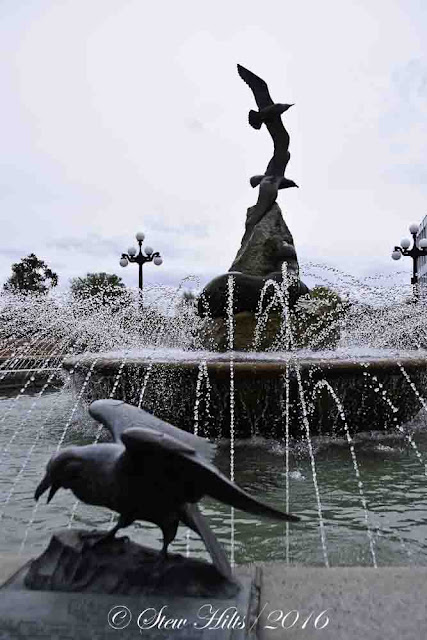 This is the raven, specifically representative of the Queen Charlottes (now renamed by the native name, Haida Gwaii).  The four colonies were of course a British imposition on the numerous territories of First Nations on the north-west coast and do not represent actual native territoies.  Attitudes to the role of First Nation peoples in Canada have come a very long way since 1962 when this fountain was installed, but it does represent an early attempt to honour those peoples in a less exploitive way. 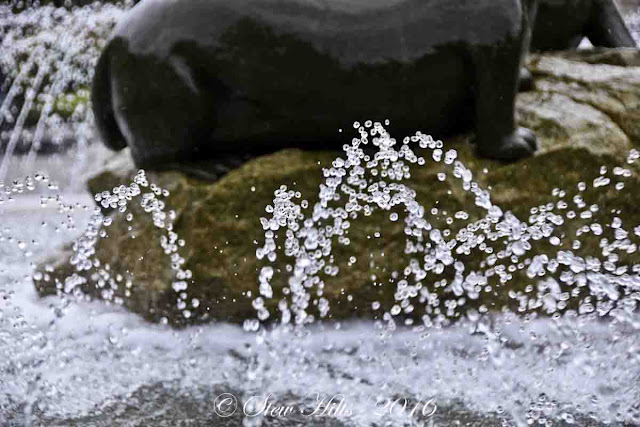 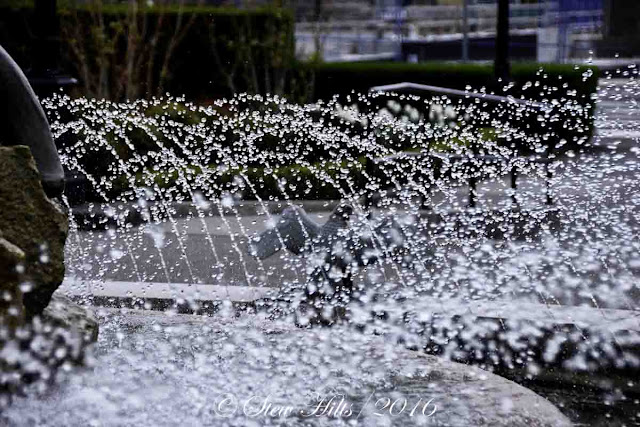 As I do with waterfalls, I played around trying to 'stop' the water droplets.  I liked the result. 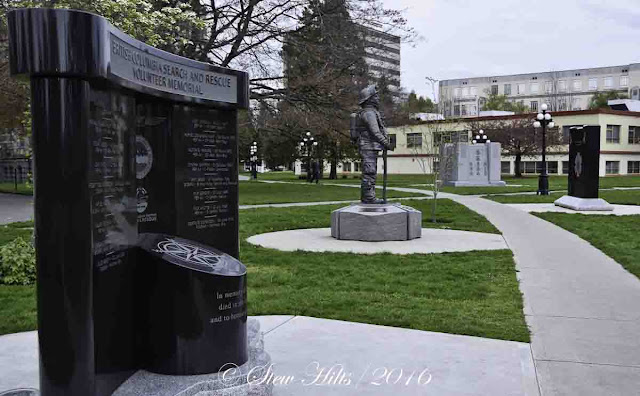 Beside the fountain are four important memorials, to Search and Rescue, Police, Paramedics and Firefighters who have lost their lives in service in B.C..  The second from left here is the Fallen Firefighters Memorial. 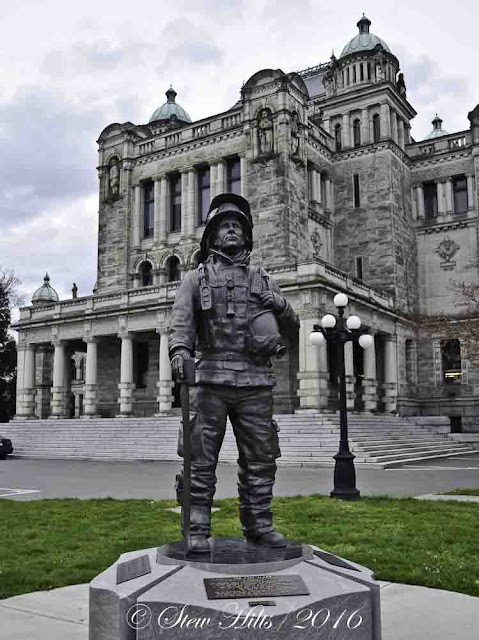 As you know if you've read William's story, I'm interested in any memorials like this that I find. 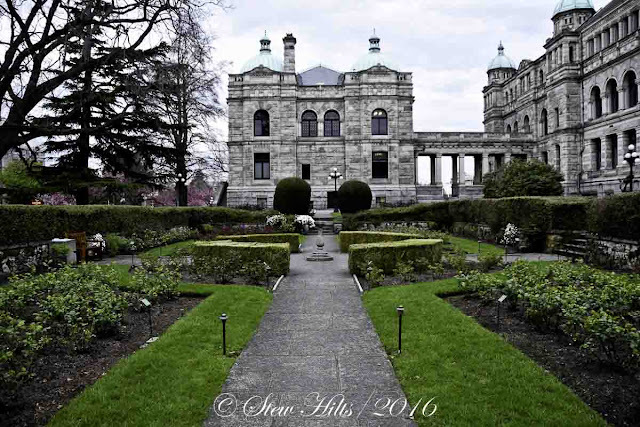 Beside the Legislature is a small Rose Garden, with a classic formal '4-square' garden design, but no colour at this time of year. 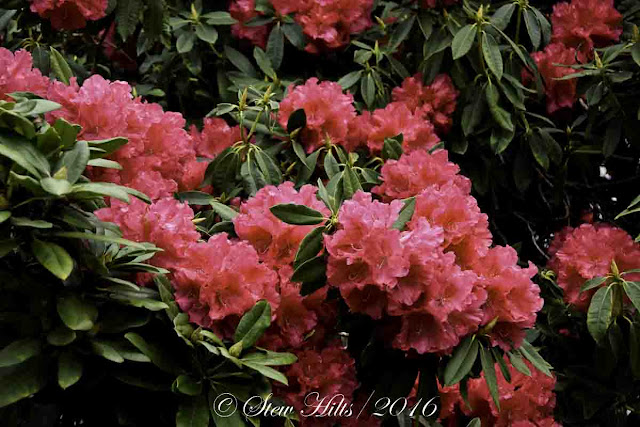 But just outside the hedge was that bright Rhododendron, 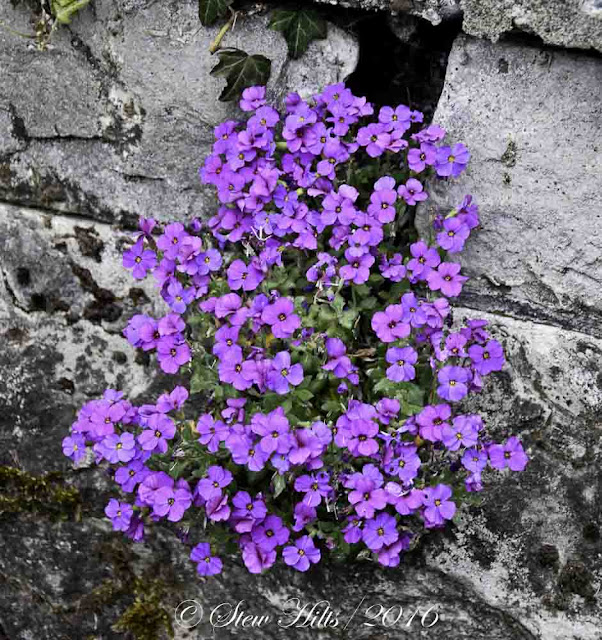 and growing out of the rock wall was a cluster of tiny Phlox flowers.

We had a great walk this morning looking for wildflowers here in the valley.  I'm accumulating pictures to share after I've finished sharing those from our trip out west in April.

So do you know who Queen Charlotte was?  She was the wife of George III in Britain, the king who eventually went insane in the last decade of his reign; his son George IV had to reign as regent.  Meanwhile, Queen Charlotte is given credit for helping establish Kew Gardens in London.