A short drive from the ferry landing on Vancouver Island, down the Saanich Peninsula toward Victoria, is The Butchart Gardens.  We had been there before, nearly 30 years ago with our kids, but this time we stopped by and had a leisurely visit.  It was expensive, but spectacular.

In 1904 Robert and Jennie Butchart moved to Tod Inlet on Vancouver Island in search of limestone deposits for cement production.  Robert had actually begun in the cement industry in Owen Sound, Ontario, not far from our home here.  They began a limestone quarry and the manufacturing of cement, creating the raw landscape for this garden. 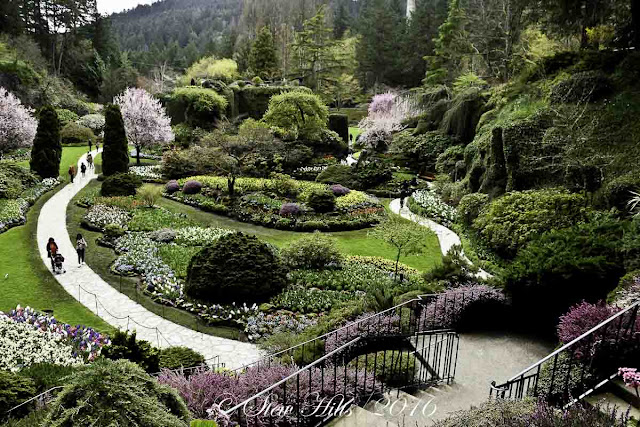 This is the limestone quarry today!  Jennie Butchart began transforming the bare rock into a garden in 1909, bringing in topsoil and adding the plants.  She was wealthy enough to hire a garden designer, and she was able to take advantage of the workforce from the quarry to do a lot of the work.  The result is one of Canada`s most spectacular historic gardens, largely created before 1920. 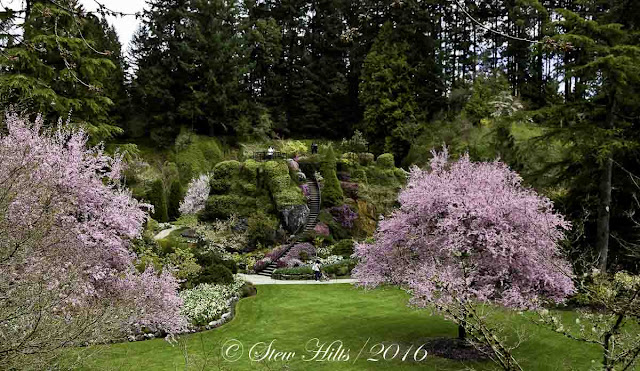 We headed straight for the sunken garden that occupies the old quarry, and walked around the upper edge looking down on the gardens.  A high lump of low quality limestone that wasn`t quarried provides a lookout in the middle of the garden - check out the stairs in the centre of the picture. 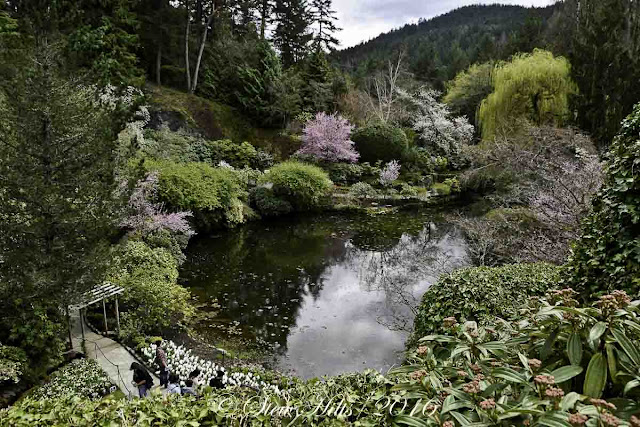 The lookout provides a great view over a small pond in the lowest point of the former quarry.  The flowering trees and shrubs were a highlight of our mid-April visit. 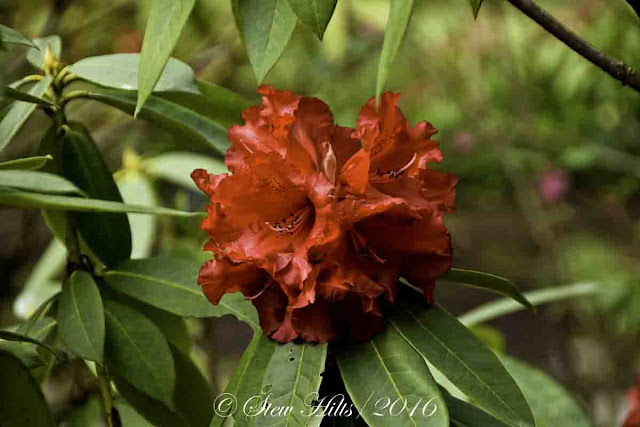 We walked all the way to the end of the quarry, down to the bottom, and worked out way back past the beautiful blooms.  Rhododendrons have such spectacular blooms, but won`t even grow in this part of Ontario. 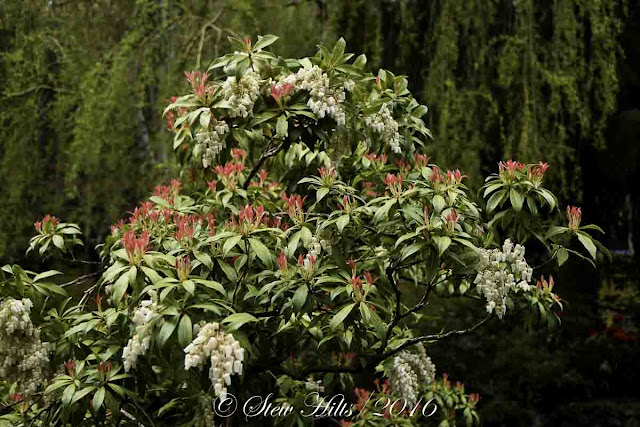 This is a very interesting shrub that at first glance has two distinct colours of flowers, red and white.  A closer look though reveals that the red parts are new leaves; the white are the flowers.  It`s the Lily-of-the-Valley shrub, with tiny flowers that look very like Lily-of-the-Valley flowers. 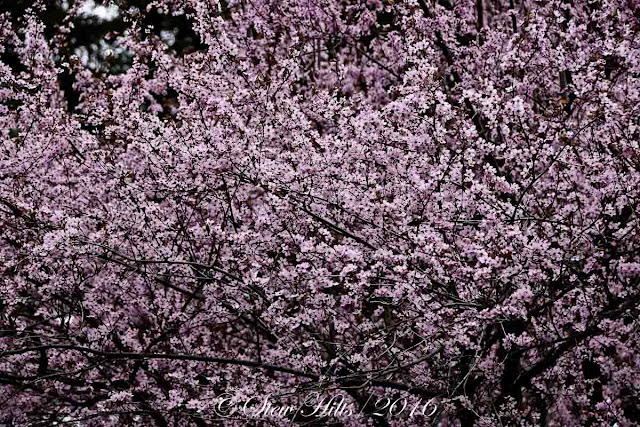 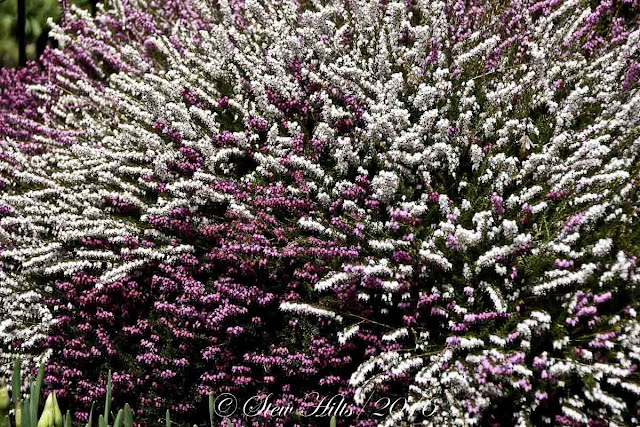 We were certainly there at just the right time for the blooming Cherry trees and Heather! 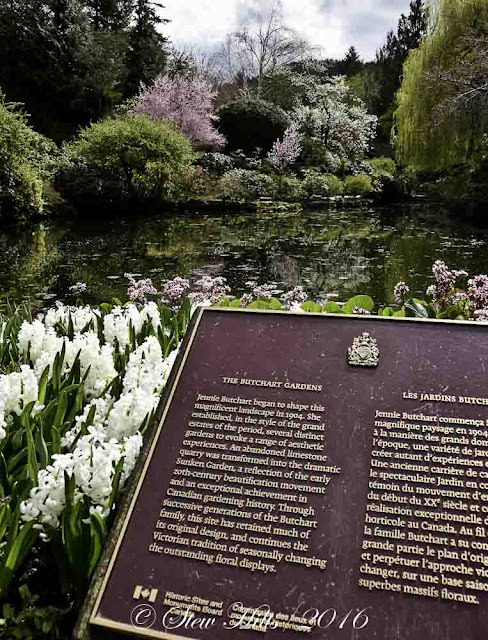 The gardens have stayed in Butchart family hands, and were named a National Historic Site in 2004.  Currently a great-granddaughter of the Butcharts owns and manages the garden, with an extensive staff and a million visitors a year! 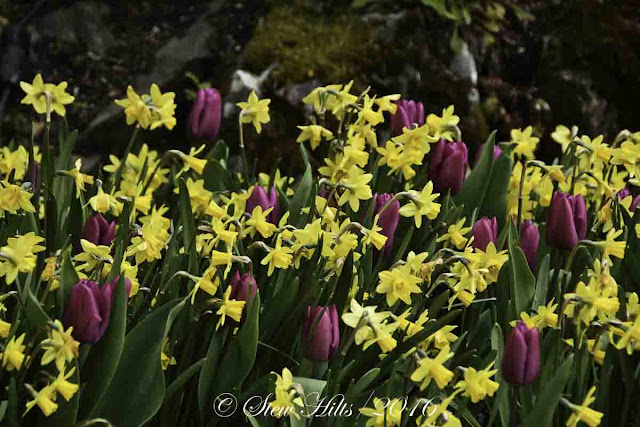 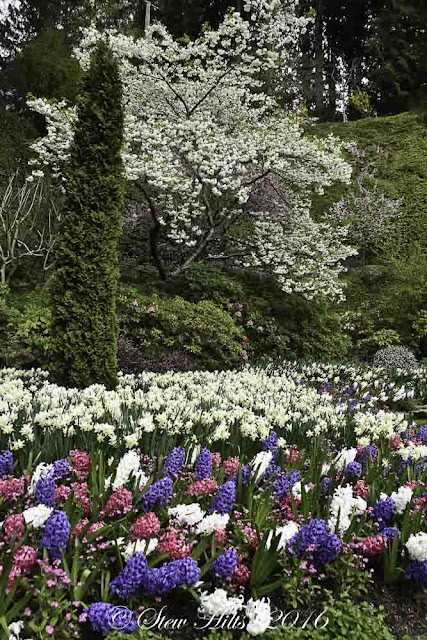 One of the things we noticed was the interesting colour combinations of plantings.  The Hyacinths and Daffodils were in full bloom and the tulips were just beginning to come out.  A lot of bright colours, which appealed to me; all the bulbs will be removed and other flowers planted over the season. 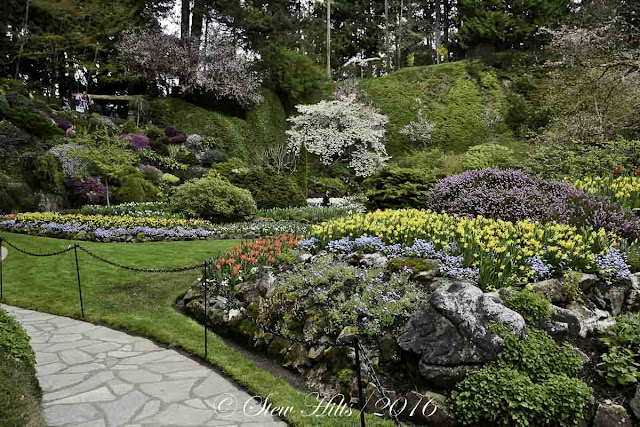 Every step along the paths brought a new view of the garden, and at this time of year it wasn`t too busy.  We started out surprised by the high price, but ended up feeling it was a great place to visit!  It`ll take me a couple more days to finish our tour; hope you enjoy it.