As I've been following individual farm fields this summer to see how the crops grew, I've come to realize that there is a lot of variety among 'hay bales'.  In fact, not all those big round bales that I have dozens of pictures of are 'hay' at all.  So here's what I understand after watching all these fields, and talking to a few farmers.  Just come back tomorrow if this level of detail doesn't interest you, but I want to sort it out in my own mind. 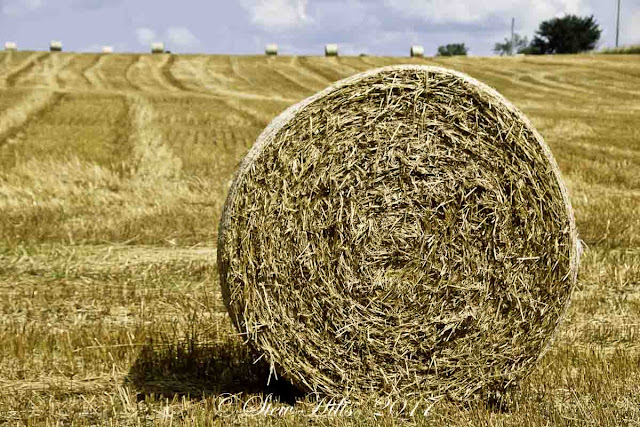 The simplest answer to my question is that a 'hay bale' is not a hay bale when it's a bale of straw.  When wheat as in this field is harvested, the combine takes the grain, but it does not take the stems and leaves of the plant.  These are left in long windrows in the field and later baled.  Without the grain included, this makes very poor fodder for cattle because it's not nutritious, but straw is widely used for bedding, for horse farms as well as cattle farms. 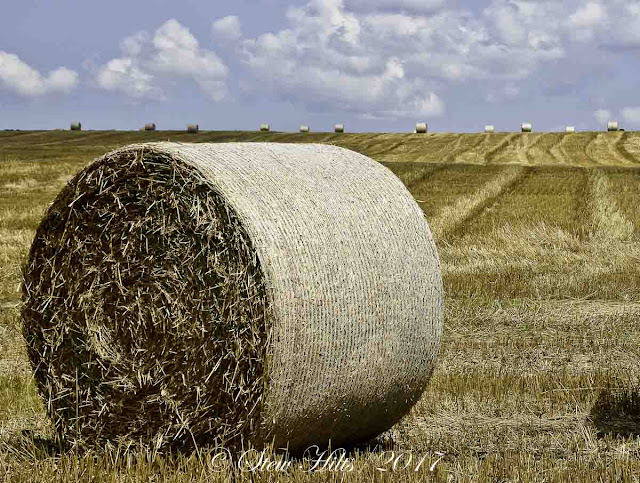 You can see the fine plastic mesh that the baling machine wraps the bale with, keeping it looking nice and tidy. 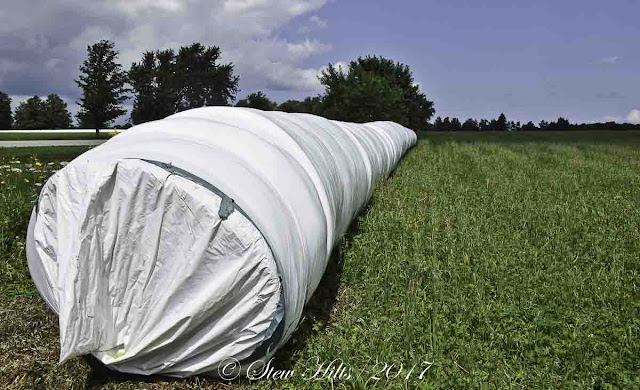 This is another example of bales that are not 'hay'.  In this case a grain crop has been cut and baled while it's still green, and wrapped in plastic to preserve it. 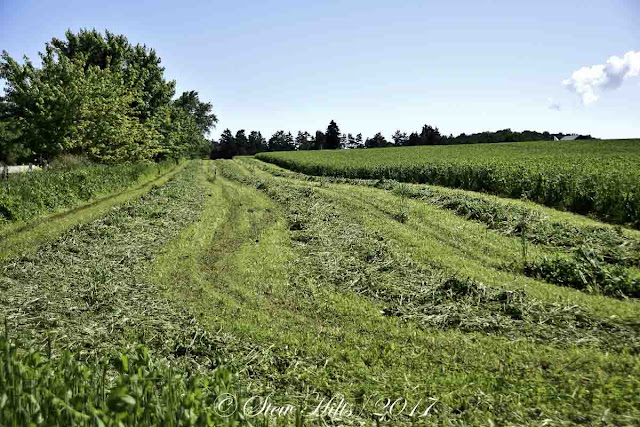 This is the field when it was being harvested.  This is a mixture of barley, oats and peas, which will provide a very nutritious food for cattle in the winter.  Increasingly farmers are trying an option like this here, in order to get higher quality feed.

As we get half-way through this story, this is actually a field of hay.  In the normal sense here hay is a field of grasses of various species.  In this case it was harvested very early in June, to maximize the nutrition value, because this is a dairy farm.  All the seeds of the grasses are simply included, and that's where the nutrition is.

Because the first cut in this field was so early, they got a second cut recently.  In a well managed hayfield like this, the growth beneath the grasses is alfalfa, which grows more slowly, so the second cut is composed more of alfalfa than of grasses.

Because it's a dairy farm, both of these harvests were baled in the white plastic, to preserve it for next winter.  Like the peas/barley/oats mixture above, this will be very nutritious for the cattle, who like the moister fodder than really dry hay bales. 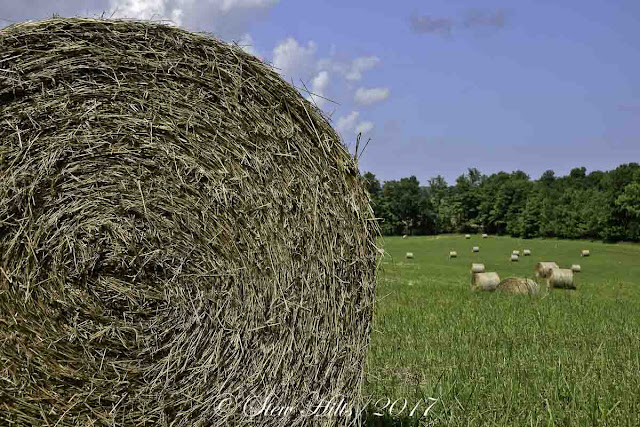 Finally, this is a good old ordinary hay bale, grown for beef cattle.  Beef cattle are not nearly as demanding as dairy cattle, so their fodder doesn't have to be so nutritious.  Often beef farmers also have another job, and stay on the farm because they love the lifestyle.  With some pasture and a few days 'making hay' over the summer, you can raise beef cattle with less work than dairy cattle.  Often the hay doesn't get cut until quite late in the summer.  That's not to say there aren't some very talented full-time beef cattle farmers around. 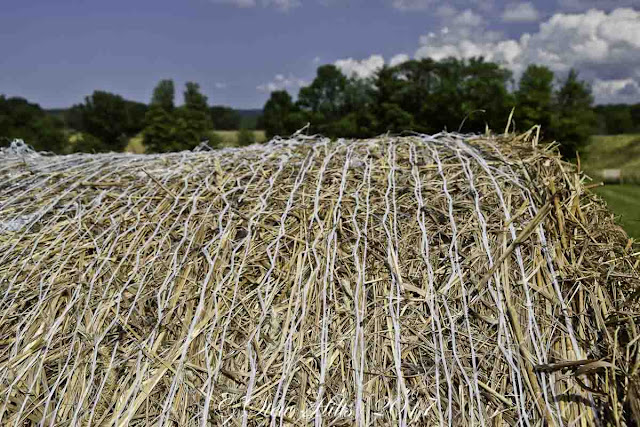 This is that white mesh that holds the bale together. 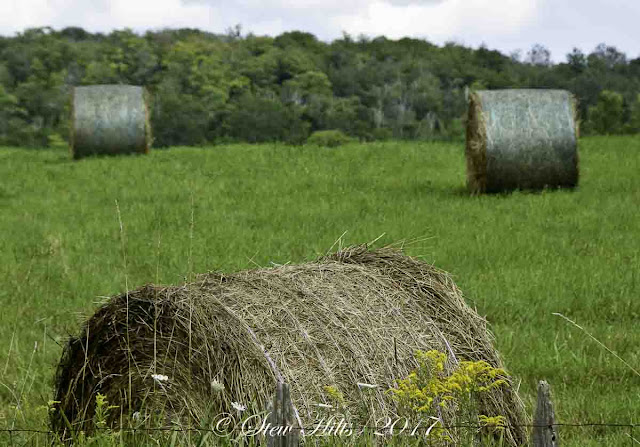 Some balers use a green mesh, and other use a very sparse line of plastic cord rather than mesh. 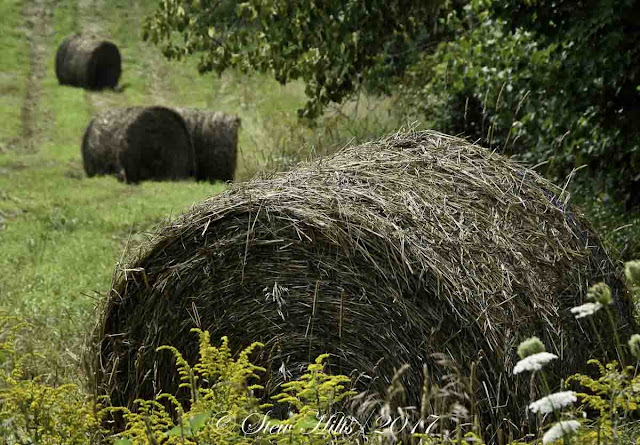 And a few older balers don't wrap the bale much at all, though there are a few cords around these bales if you look really closely.  All of these hay bales that are unwrapped are probably stored under cover, either under big plastic tarps, or in canvas roofed farm shelters.

So next time you see a field of straw bales, don't confuse them with 'hay bales'!  Big round bales are more varied and complex than I thought at first.
Posted by The Furry Gnome at 9:11 PM