It was a beautiful Sunday and we decided we needed a break.  Picked Wasaga Beach as our destination, and then checking Google Maps remembered the Nancy, a ship from the War of 1812.   It's featured at a Historic Site near the mouth of the Nottawasaga River. 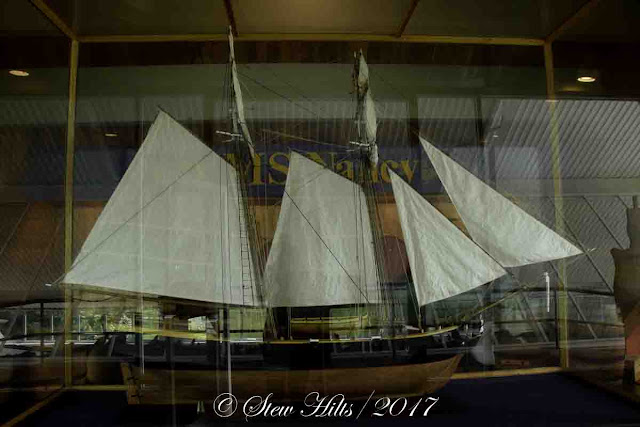 This is the Nancy, a sailing ship built at the (then) British port of Detroit in 1789, primarily for the fur trade.  It would carry trading goods upstream from Fort Erie at the east end of Lake Erie, to Forts St. Joseph and Michilimackinac in upper Lake Huron, then both British fur trade forts.  There the trade goods would be exchanged for the furs brought east down Lake Superior, in these years for the North West Company.  The Hudson's Bay Company shipping went to and from Hudson's Bay. 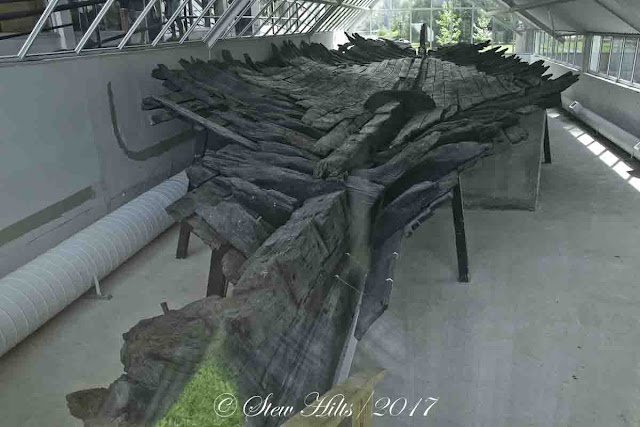 This is the remaining hull of the Nancy.  It's totally enclosed, so it's hard to get photos without reflections.  When the War of 1812 was declared, the ship was drawn into service for the British navy.  At the Battle of Lake Erie the American navy destroyed all the British ships involved, but the Nancy was away on a trading mission to the north.  It survived as the only remaining British navy ship on the upper Great Lakes. 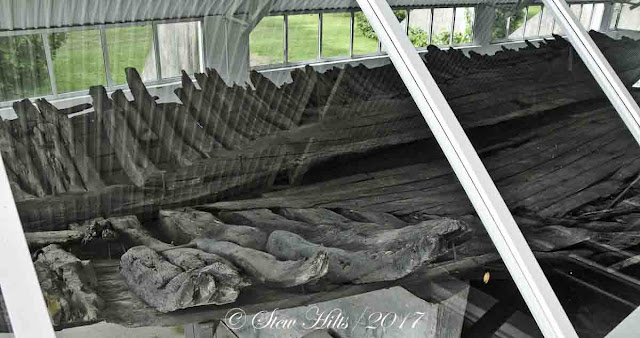 In this picture I was struck by the ship's ribs, which are flattened on one side, but are just the original shape of the tree trunks that were used.  The American ships headed north to take Fort Michilimackinac but the Battle of Mackinac Island was inconclusive.  The three ships headed down Georgian Bay to try and find the Nancy. 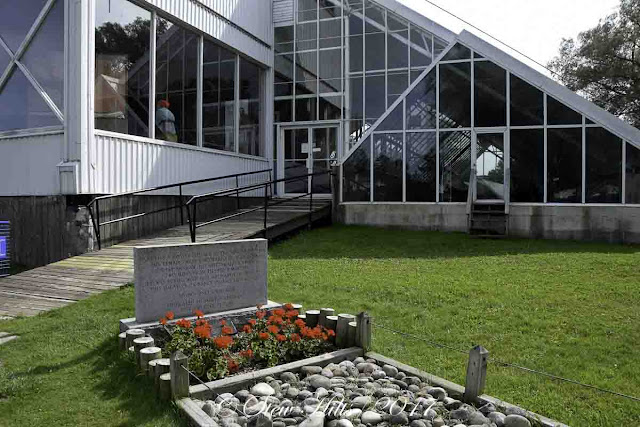 They found it at the mouth of the Nottawasaga Bay, hidden a short distance up the river.  Three American ships with many more men and larger cannons than the Nancy's crew, led the Captain of the Nancy to rig the ship with gunpowder, planning to blow it up rather than surrender it to the Americans.  The ship burned to the waterline.  This is the building housing the remaining hull of the Nancy, and the adjoining museum (which was excellent).  The Nancy lay buried under sand here for over 100 years before it was excavated in the 1920's.  Now it's known as Nancy Island. 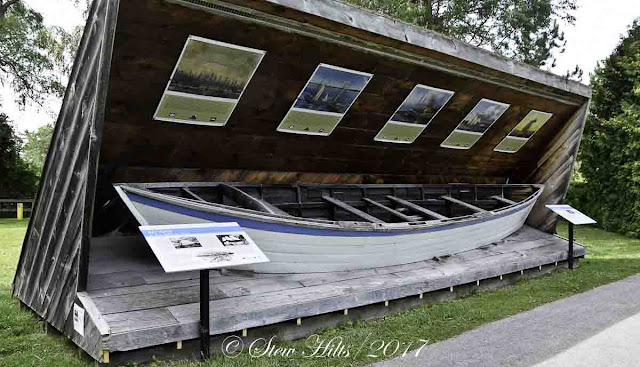 The park also had a model of a bateaux, the smaller rowboat known among the natives as the 'White Man's Canoe'.  It was widely used in the fur trade.  The Nancy's crew escaped in boats like this and rowed all the way to Fort Michimilimackinac.  There they surprised two of the American ships and captured them, renaming them 'Surprise' and 'Confiance'.  The British had retaken control of the upper lakes thanks to the crew of the Nancy, undoubtedly a big influence on the future border between our nations. 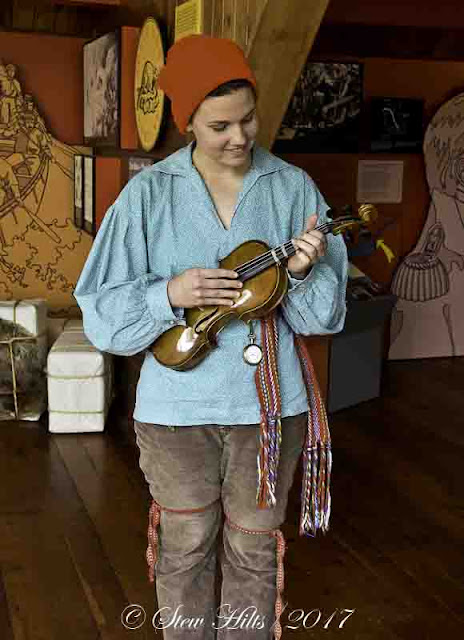 The small museum was great!  This 'voyageur' picked out a tune on her fiddle for us.  The two young women were able to answer all my questions about the displays, the Nancy, and the War of 1812 in general.  I could go back here with a pen and notebook and spend a whole day. 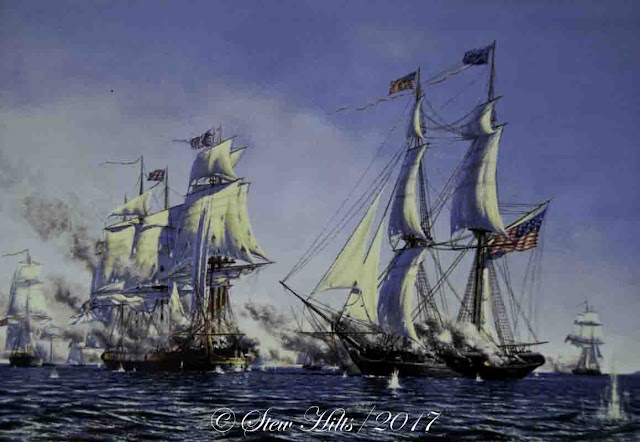 This visit, short as it was, opened several new doors in my own mind.  First, I learned that the War of 1812 was as much about naval battles and control of the Great Lakes, as it was about the land battles at Niagara, which I have known about for years.  The stories of Laura Second, Queenston Heights, and Lundy's Lane are familiar to many Canadians, but I doubt many know about the Nancy. 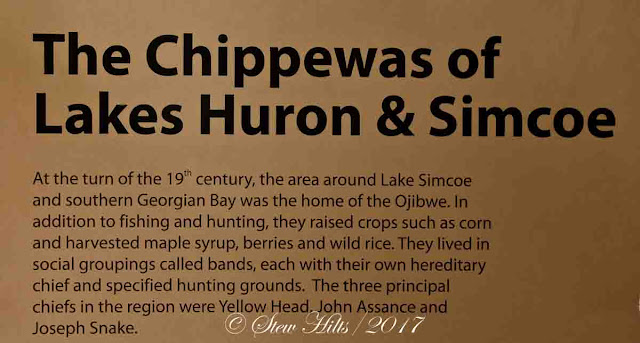 It also made me think about the role of the First Nations at the time.  The British got along well with the native bands, thousands of whom fought on the British side.  This of course means that there were many thousands of natives living here long before white settlement arrived.  Key areas in southern Ontario were quite densely settled. 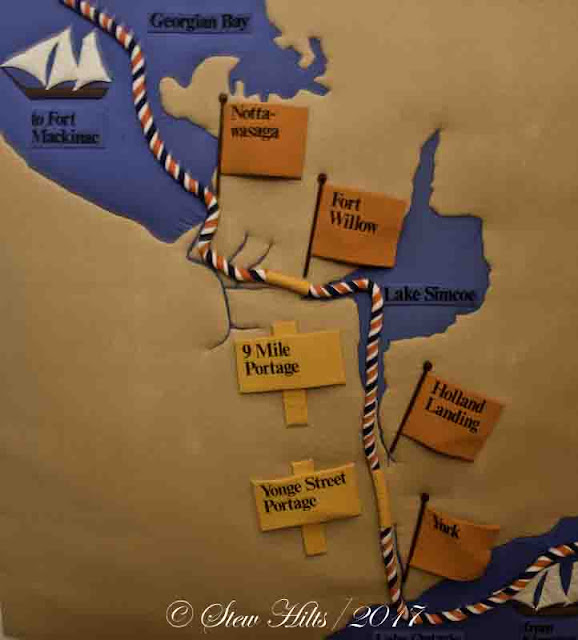 The Toronto Carrying-Place Trail was a native portage trail from Lake Ontario to Georgian Bay via Lake Simcoe.  Adapted for use in the fur trade, it was a native route for thousands of years before that.  Having paddled part of the Voyageur trade route down the French River, and the Bloodvein River in northwest Ontario, I know that these routes had been used by native peoples for thousands of years too.

Canada did not evolve as a nation until 1867, but the centuries before this fascinate me.  I expect you'll hear more of these topics in the future as I pursue these ideas.  A nice Sunday afternoon drive turned into a very interesting lesson in history.