Since I'm going to be posting about places up the Bruce Peninsula as well as here in the valley, I thought I should give you a bit of an introduction to the peninsula.  Many people would agree with me that the 'Bruce' is the most scenic area in southern Ontario, especially its rocky eastern shoreline. 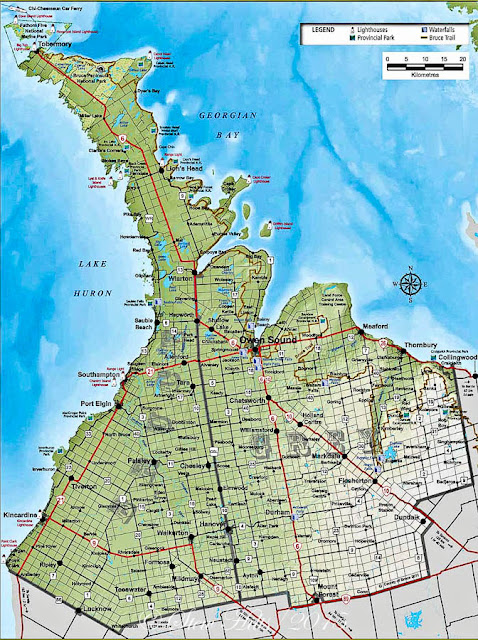 This map shows where the Bruce Peninsula is in southern Ontario, showing all of Grey and Bruce Counties.  Lake Huron is on the left, and Georgian Bay on the right, so it really is a peninsula, though a large one.  You can also see the Beaver Valley on the right had side of this map, below the compass rose.  It runs from the town of Thornbury on Georgian Bay south to near the town of Flesherton, and is visible as a shaded green colour.  You can see the patch of light blue representing Lake Eugenia on the east side of the valley. 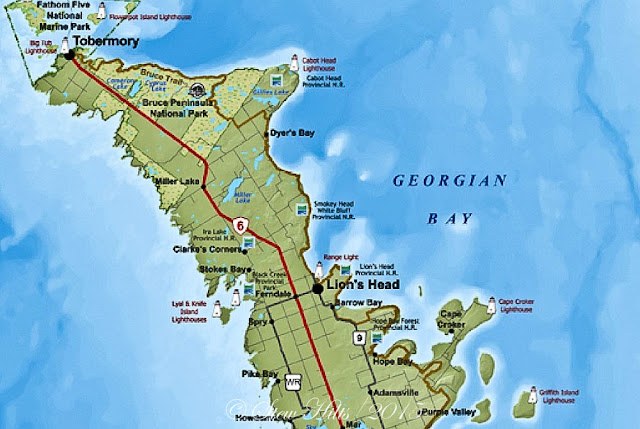 A closer look at the north part of the peninsula shows the area where we'll likely be spending most of our time exploring.  If you look just north of the '6' label on the highway, you'll see Miller Lake where the campground is.   And you can easily find Tobermory and Lion's Head, the two bigger communities we'll probably frequent.  If you look further north, you'll see there are two national parks, the Bruce Peninsula National Park and Fathom Five National Park.  I'll be visiting them in many future posts I expect. 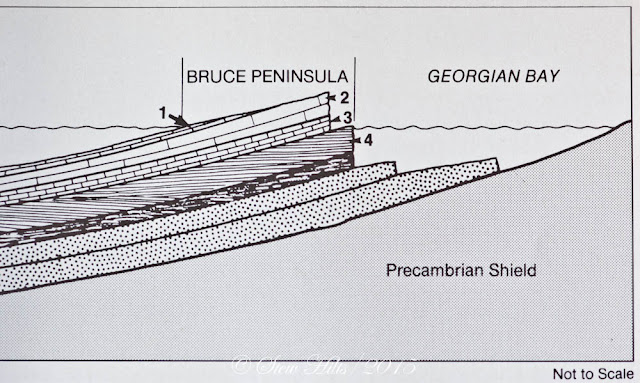 This is an extremely simplified diagram I drew years ago to describe the geology of the peninsula in very general terms.  The cliff is formed by layer #2, the Amabel Dolomite, a very hard rock.  Beneath it are the layers that erode more easily, helping form the cliff above, #3 the Clinton and Cataract formations, and #4 the Queenston Shale (which is incorrectly shown as an underwater cliff - it should be a long eroded slope).   #1 is the Guelph Formation, which encroaches from the west.  All this is the east side of the Michigan Basin, which stretches all the way west to the Door Peninsula in Wisconsin. 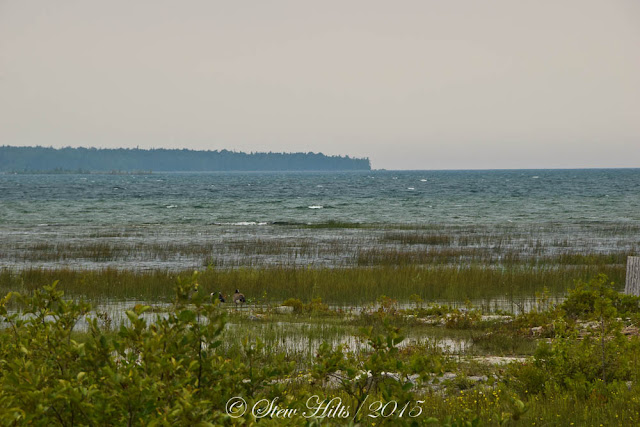 Because these rock layers dip very gently westward, the west shoreline of the peninsula dips very gently into Lake Huron.  It varies from rocky limestone to marsh to sandy beach, but it creates a very shallow shore, and is pretty well lined with cottages. 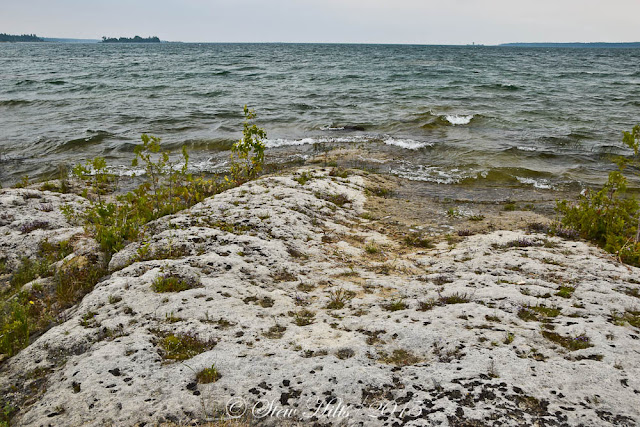 These two pictures are taken at Stokes Bay. 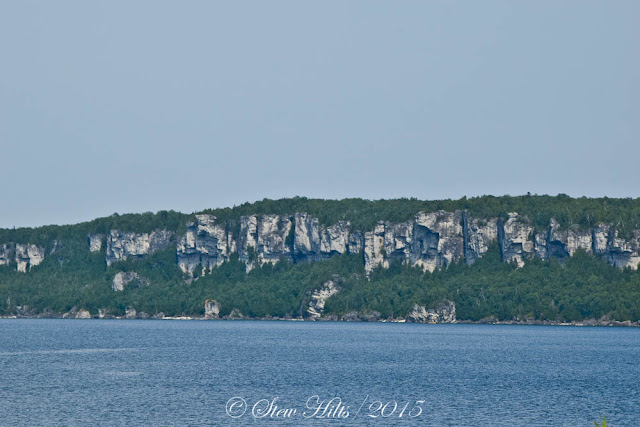 On the other hand, the eastern shore is the rocky cliff, broken by a number of bays where the villages are found.  This view is back at Lion's Head on an earlier trip.  These particular cliffs are a very popular rock-climbing site. 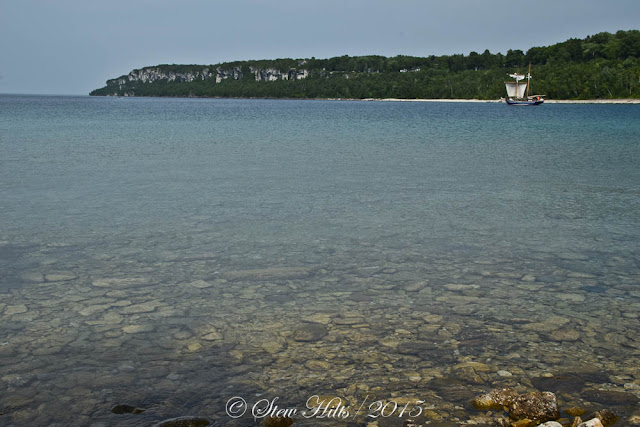 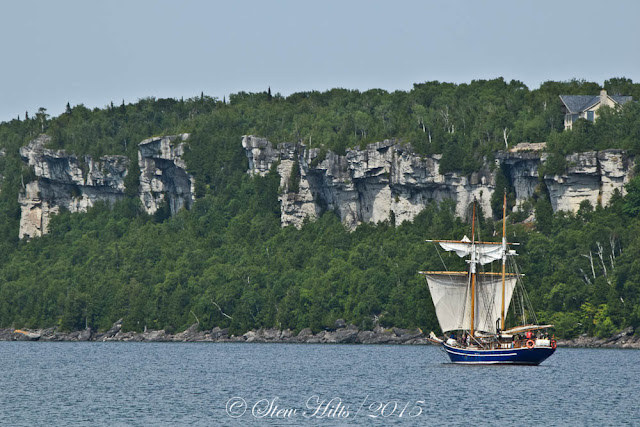 On that day, about a month ago, we saw what looked to us a bit like a pirate ship sailing out under the looming cliffs! 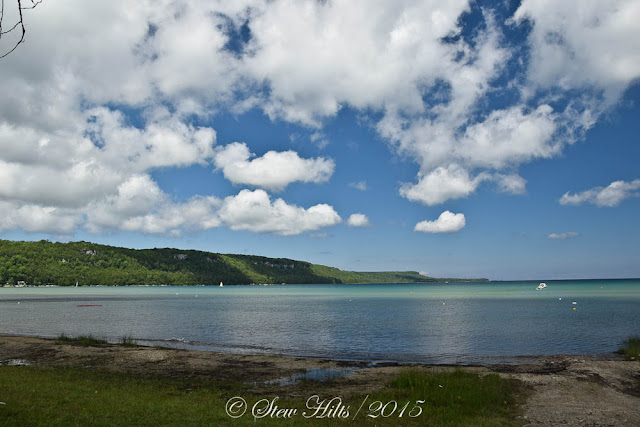 And here's one last view of the eastern shoreline, taken in the village of Hope Bay.  I've always thought the line of cliffs on the north side of the bay here was one of the nicest views in the peninsula.  Hopefully you now know at least some basics about the Bruce Peninsula, as background to future posts.