Winter is here, I expect to stay!  It was 16 below this morning, and we got a fresh 6" of snow yesterday.  And the forecast is for below freezing for the next two weeks.  Luckily we missed the nearby streamers off the lake, or we might have had much more.  Still the world was white today, and the snowblower got its first workout. 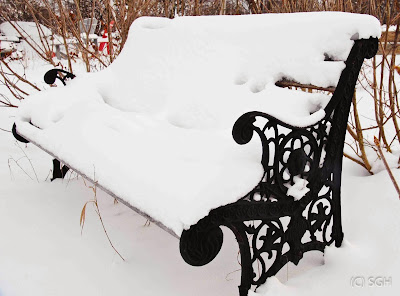 This is the bench we never sit in...but it looks nice!  Personally, I'm one who enjoys winter, or at least, since it's inevitable, have learned to enjoy it.  And I would much rather have temperatures a bit below freezing and some snow than cold November rains! 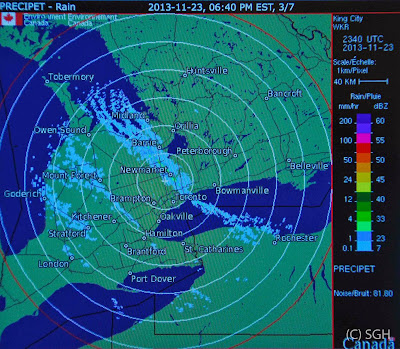 And this is the radar I now check out regularly, though the colour turned out a little dark.  This storm was preceded by a cold front moving down from western Canada and the arctic, pushing the warmer air of last week out of the way.  Following the cold front the winds shifted and strengthened, blowing southeast off Lake Huron and Georgian Bay.

You can see here what I refer to as the 'streamers' of snow coming off the lakes. You can see here that they're stronger this time off Georgian Bay than off Lake Huron.  And this time we're in the gap between them.  (On the radar they're constantly moving southeast).  The same phenomenon happens at the east end of Lake Erie over Buffalo, on the east side of Lake Michigan, and the east side of Lake Superior.  It fascinates me to watch the changing weather patterns and try to understand them. 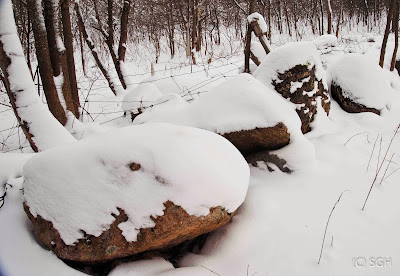 But I didn't have time to get out to the woods today, so I just took these in the yard.  Somehow pictures never do justice to winter, because they aren't accompanied by the cold feeling you have while out taking them!  These are a few of the big boulders in the old fencerow. 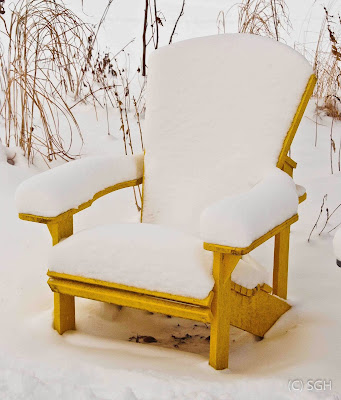 The yellow plastic chair - these are the indestructible recycled plastic chairs that can be left out all winter.  They're my favourite because here under the apple tree is where I sit while resting from gardening all summer long. 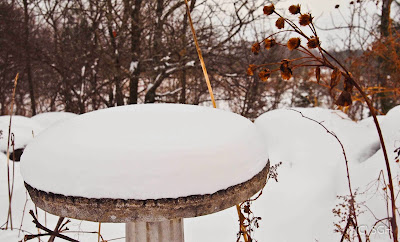 The bird bath is old and never has water, but I thought it looked nice with the snow cap and some seed heads of some coneflowers waving over it. 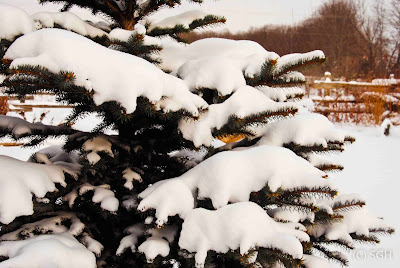 The evergreens always catch the most snow, and provide shelter for the birds at the winter feeders. 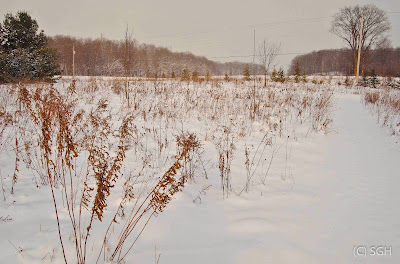 Now the meadow is white and will probably stay that way.  Only the tough goldenrod stems remain upright; all the grass is flattened and buried under the snow. 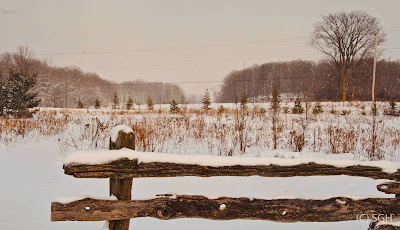 Another view - I rarely bother with photos of the meadow, 'cause I can never avoid the hydro lines or that obvious hydro pole!