At the end of yesterday's post we ended up on the cliff overlooking our hike route to the cliffs - in the rain.  It kept raining lightly, and we followed the cliff east along the trail until eventually we came to a steel staircase installed to allow hikers to get up or down the rock face.  In the meantime, we walked through some beautiful fall forest and past another viewpoint. 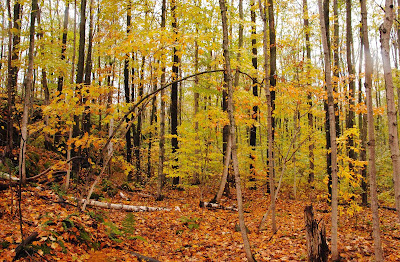 The forest above the cliff is actively managed for forestry by the Chippewas of Nawash, who live on Cape Croker, and I visited the area more than once with students for a tour with the band forester.  I remember being very impressed with the sustainable philosophy, expressed as managing for seven generations, that the forester explained to us.  (There is tractor trail access to this woods from the other side). 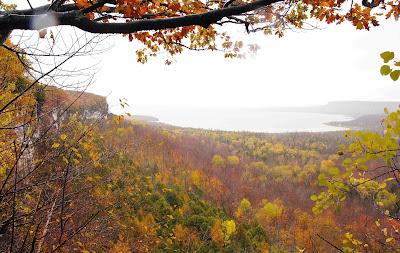 This is the view toward Georgian Bay, the cliff extending out on the left and Cape Croker being the land on the right.  All the land below us at this point is in the First Nation; immediately below us wrapped around the shoreline is a popular campground run by the community. 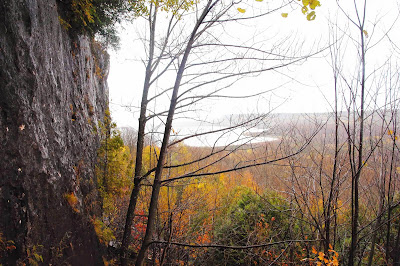 In the rain and crowd I missed getting a picture of the stairs down the cliff, but I did hesitate going down long enough to take this picture while headed down the stairs.  There are several places along the 900 km. Bruce Trail where stairs are needed to get down or up the cliff. 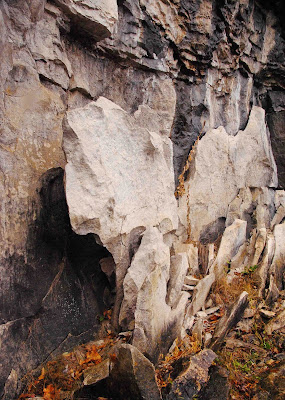 I was surprised when we got to the bottom though, at the active rock fall, numerous slabs of rock still standing vertically at the base of the cliff, having been dislodged by winter freeze-thaw action.  The larger pieces here are six feet high. 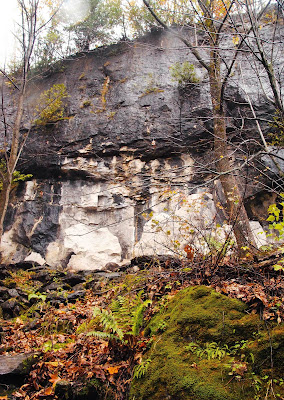 Looking back up you can see the 50 foot vertical cliff, though the ladder is just out of sight to the left.  The light-coloured rock is where fresh pieces have fallen off the rock face.  The dark part of the cliff is covered with a very thin surface lichen, which has had several thousand years to grow across the face of the dolostone. 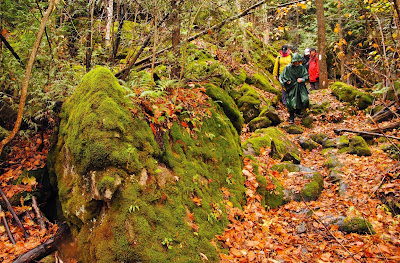 The next 200 yards was the most difficult of the entire hike, back in the talus slope with numerous moss-covered rocks underfoot, and today they were all slippery in the rain.  It's considerably harder going downslope on this sort of trail than going upslope.  And if you were bifocals, your glasses dotted with raindrops, it's particularly difficult.  We went slowly, and ended up at the back of the group. 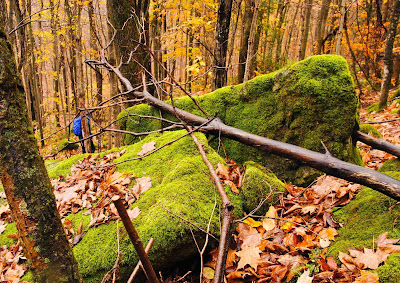 But it's still my favourite habitat, those huge dolostone boulders sometimes completely covered in moss as these ones were, looking almost flourescent green.  Tomorrow - the Fossil Hill Formation that I was hoping to see on this hike.