We've had a great deal of rain around here, on top of the snow of ten days ago, and the creeks and rivers are full to overflowing.  For the first time I can remember, the ephemeral lower Wodehouse Creek waterfall is flowing in November!  The magic about this waterfall is that it only flows a few days a year; the adventure is that it's quite a challenge to get down and see it - let me tell you the story. 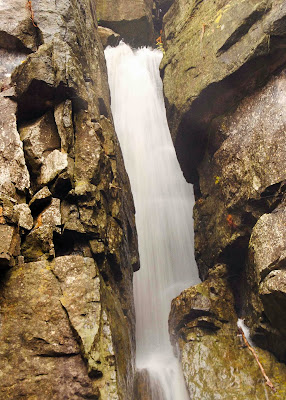 This is the main part of the waterfall, which I might call a secret waterfall, because virtually no-one ever sees it.  It's about 30 feet tall, plunging directly down a wide crack between dolostone blocks of the Niagara Escarpment.  You see the stream flowing toward the cliff when you enter the top of the Beaver Valley Ski Club, but it's a major challenge to get down below to see the falls. 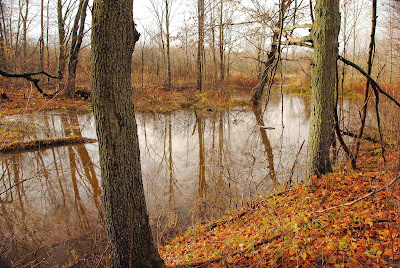 Normally this pond, just a short distance upstream, is a sinkhole, with a small stream flowing in from the right and disappearing into the rocks.  But when we've had a great deal of rain (or melting snow), it can back up forming a pond, because the actual sinkhole is too small to handle all the water.  Before now I've only seen this happen in a winter thaw, or during the spring thaw in March.  But the past few days have brought enough rain to do it. 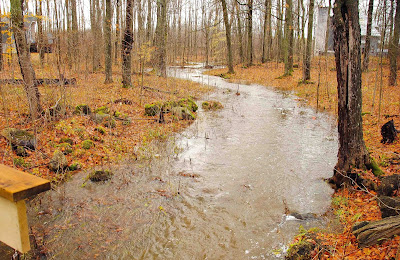 So the sinkhole overflows and creates a surging stream south, around a bend, and towards the cliff.  You can see here the stream is about 15 feet wide, and perhaps a foot deep - about 350 days a year this is just a dry stream channel. 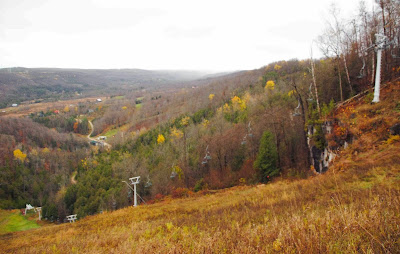 To get to see the actual waterfall you have to work your way down this ski slope (reputedly the steepest ski run in Ontario), and along the cliff on the right hand side.  Every other time I've seen the waterfall flowing (from above), the ski season was still in operation, and it's impossible to do anything other than ski this slope (and I certainly couldn't do that!).  So to have a chance to go and investigate this in November was a unique opportunity. 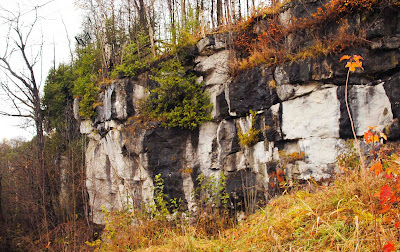 The cliff beside the ski run illustrates this part of the Niagara Escarpment well.  It's dolostone (or magnesium-rich limestone), and usually about 30-60 feet high.  This rock cracks easily, forming fractures and crevices and underground channels, which is how the sinkholes up above can function.  In turn, springs emerge further down the slope, when all the flow into the sinkholes re-emerges into the light of day. 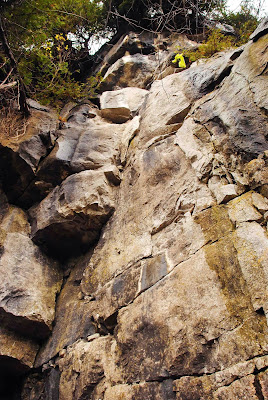 I carefully worked my way down a gentler ski run, crossed the steep one, and followed the base of the cliff for some distance toward the waterfall.  I actually saw several places where water was flowing through cracks in the cliff before I found the falls.  This picture is looking straight overhead standing at the base of the cliff. 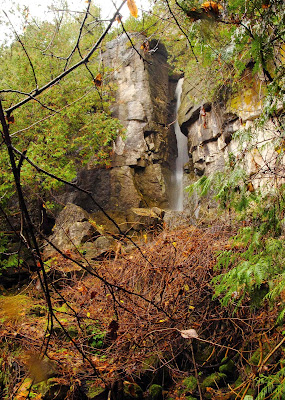 And this was my first glimpse of the waterfall, after scrambling through some brush to get there.  The slope below is all talus, or broken bits and boulders of dolostone, as well as fallen branches, most of it covered in moss, so you have to be careful! 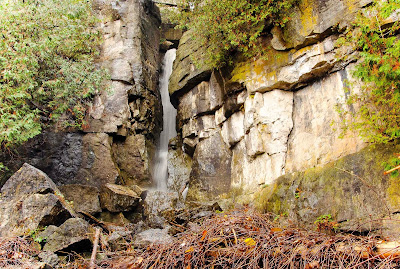 As I emerged from the brush I was a bit surprised to see how the waterfall is actually falling in a crevice between two big blocks of the cliff.  I hadn't expected that, and haven't see that in any of the other waterfalls around here.  I wrote a post on this waterfall last year, at a time when I couldn't get down below safely, so my only picture to date has been from above.  I was thrilled to finally see it, and just stood to watch for a few moments, a little bit in awe of such a unique place. 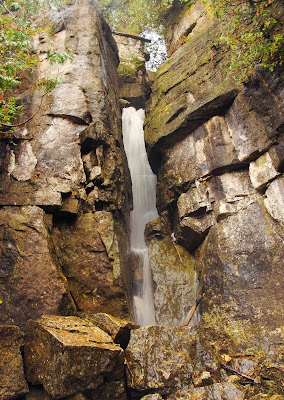 This picture shows more clearly how it falls in the back of a crevice, and disappears under the large boulders in the foreground.  Hitting the boulders as it reached the bottom, it was throwing spray 20 feet out in front. 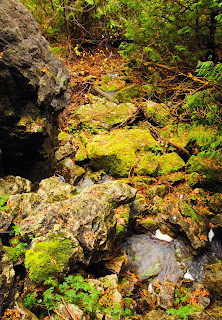 There was no actual stream below the falls, for the boulders on the talus slope are so loosely piled that the water could again easily disappear out of sight below the mossy rocks.  But I know it does emerge as a stream further down the slope, along with the other water that's flowing underground from the sinkhole at the same time..

As I left, the falls slowly disappeared out of view in the crevice.  And that's the magic ephemeral lower Wodehouse Creek waterfall, which will likely disappear again in a few days, to reappear next spring thaw for a few days - but who knows if I will ever again have a chance to get down and see it!