The secret waterfall was the most unique thing below the cliff, but the habitat there was also unique and interesting in its own right.  I never cease to be fascinated by the cliff itself, and the mossy boulders and ferns that make up the talus slope below. 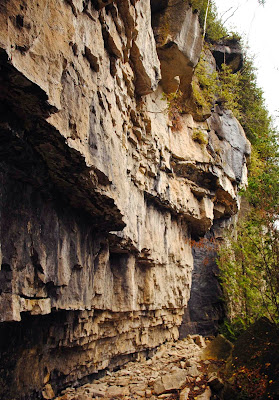 The dolostone cliff itself is an ancient coral reef, dating from about 400 million years ago.  At the top it tends to be blocky and solid, very resistant to erosion, but as you get near the bottom in this location, it changes to thinner uneven layers which break off more easily.  The cliff ends up slightly undercut - sticking out further higher up (sometimes over your head). 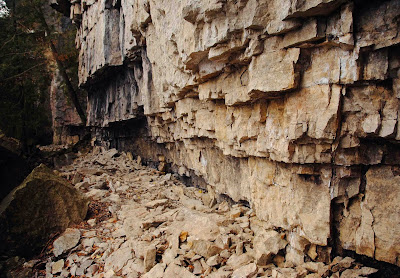 When I say erosion, this is not erosion as in a stream flowing through sand or gravel, it is rock pieces breaking off through water getting into the cracks and freezing during the winter.  The freeze/thaw or frost action is what breaks pieces off the cliff.  You can see here that there are fresh, light-coloured bits of rock all along the bottom of this part of the cliff.  Undoubtedly many of these broke off during the past winter.  I could feel loose pieces of rock all along the face of the cliff here, just waiting for a further push from the frost. 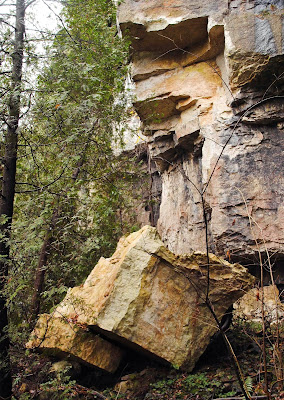 To many, including hikers along the Bruce Trail that commonly follows the top of the cliff,  the Niagara Escarpment seems solid and immutable, not about to collapse beneath me!  But every now and then I find very large blocks that have recently broken off.  These larger blocks only stay light in colour for a few years, so this collapse is relatively recent.  I have found large fresh rock falls from the escarpment face in five different locations all relatively nearby, over the past few years. 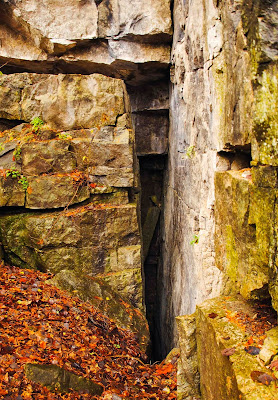 The most surprising thing was the running water inside the cliff.  I was in search of the waterfall, but the first running water I heard was down this deep crack in the cliff face.  If you look closely below, in the centre of the picture, you can see a small stream of falling water, about 20 feet down. 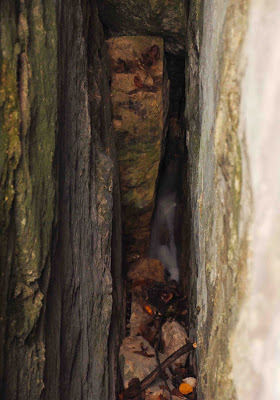 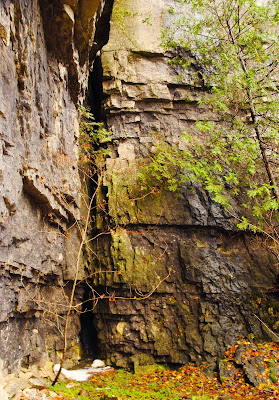 This is another crack that held a small waterfall, emerging in the puddle at the bottom and disappearing again into the rocks of the talus slope.  Before I ever got to the waterfall, I found such water flows inside the cliff in four different locations - indicating very porous bedrock, rife with cracks.  Presumably all these were flowing from the sinkhole above, about 200 yards directly west, while the waterfall further on was from the overflowing stream.  All of them feed the stream that tumbles down the steep slope lower down and through the gully to the Beaver River. 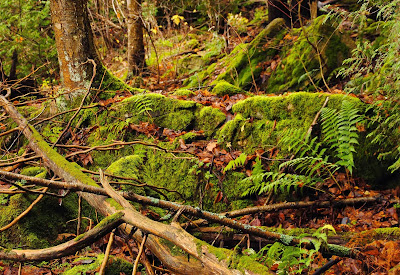 The habitat as soon as you turned away from the cliff was interesting too.  Talus slopes like this tend to be cooler than normal, and wetter, since they get so little sun, shaded by the cliff.  The same is true up and down the escarpment. 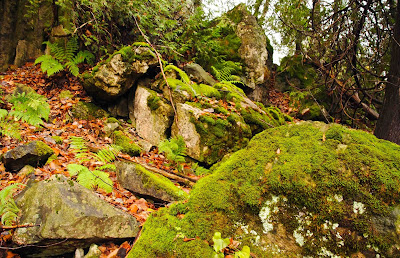 The result is a unique forest, with plenty of moss-covered boulders and ferns - in some cases the rare ferns that typify this region, though I didn't find any here.  Eastern white cedar and yellow birch tend to be common trees in this habitat, quite different from most forests in southern Ontario. 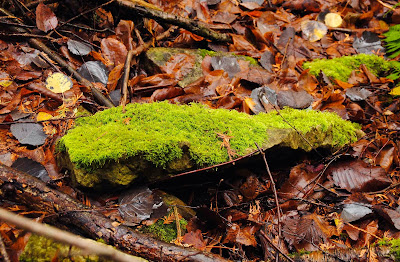 In spite of the gray November skies, the moss in places, wet from the rain, looked almost flourescent.  Some day I must write more about the escarpment talus slope itself and its treasures.