We had gone to Harrison Park to see if the fish were swimming upstream to spawn, as I'd been told they do.  The Sydenham River flows through the park, and a shallow separate channel was put in decades ago to create a wading area around a playground and picnic tables - I was taken there to play as a child, longer ago than I'd like to mention.  That's where we found the fish. 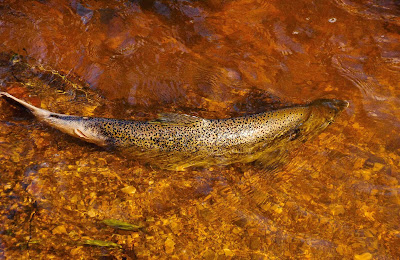 I understood that both salmon and trout migrate upstream here, but a fellow fish-watcher who seemed to know a lot more than I did said these were brown trout.  Apparently the salmon migrate up earlier. 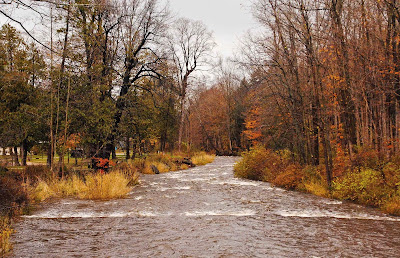 This is the main Sydenham River they swim up from Georgian Bay.  The Sydenham Sportsmen's Association has done a great deal of work to improve spawning habitat, as well as stock fish.  With the river flowing through it, Harrison Park is a particularly nice urban park. 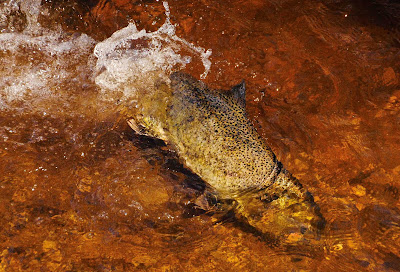 Between the bay and the park the fish have to negotiate a major fish ladder past a dam, absolutely churning with water at this time of year.  Watching it I don't know how they can do it, but they obviously know how to twist and turn their way upstream.  I need to put the dam and fish ladder on my list of places to go and get pictures. 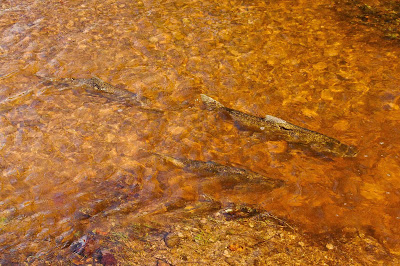 Most of the time though, the fish were just floating in the channel, always facing straight upstream into the current.  It was a pretty fast current too, so they must exert a fair amount of energy just staying still, resting for their next dash upstream.  All the fish were between 2 and 3 feet long. 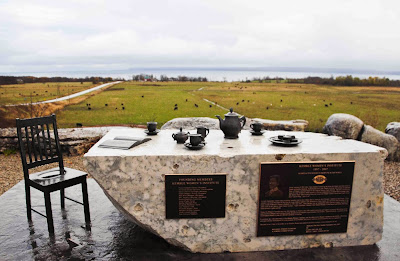 I can't resist posting another picture of this monument to the Kemble Women's Institute - now the oldest operating Women's Institute in the world!  I posted several pictures in July, but I just think it's the neatest monument - a table set for tea. 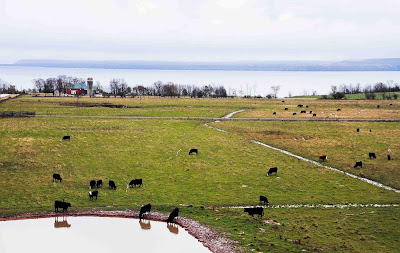 It sits on the edge of a lookout over Georgian Bay, and this time there was a herd of mostly Aberdeen Angus cattle down below.  I liked the reflections of the three cows, as well as the Niagara Escarpment bluff in the far distant upper left.