It's been snowing all day here, starting with wet snow, almost rain, and gradually getting colder, so now the world is quite white again.  And that first layer of wet snow from this morning is an icy undercoating - driving is quite bad this evening.  But back to my geology hike...

Bet you don't know what this is!  It's a 'Pentamerid' fossil, the diagnostic fossil of the Fossil Hill Formation.  And yes, I did get to see this on our geology hike at Boundary Bluffs, Cape Croker. 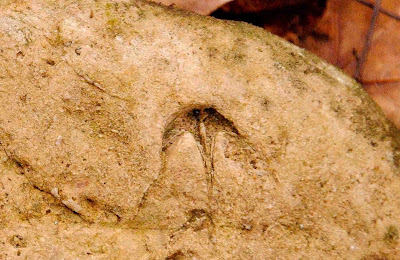 'Pentamerids' were clam-like creatures, and though you sometimes find something that actually looks like a fossilized clam, more often this marking in a rock is all that's left - about 2 cm. across, and looking a bit like a tiny deer hoof print.  For our immediate region, along the Niagara Escarpment, this is the fossil you look for to be sure you've found the Fossil Hill Formation. 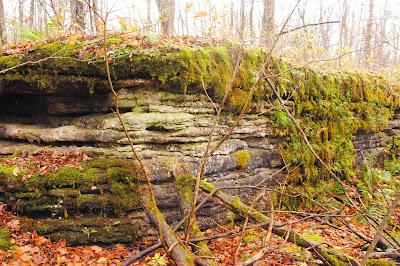 This is what the rock layer looks like.  It's a fairly thin geological layer compared to the giant dolostone cliffs above, and rarely outcrops as far south as the Beaver Valley.  But further up the Bruce Peninsula it does.  As you can see, it consists of flat limestone or dolostone layers.  It was laid down in a shallow sea at the eastern edge of the Michigan Basin about 400 million years ago, when this landscape was in the tropics. 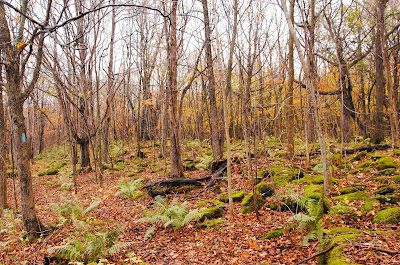 The layer tends to break off in large flat blocks of limestone, and extends across the mid-slope of the escarpment as a flat bench interrupting the slope, as you see in the picture above. 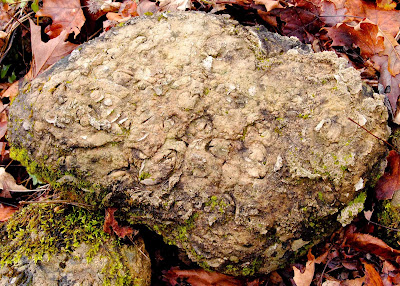 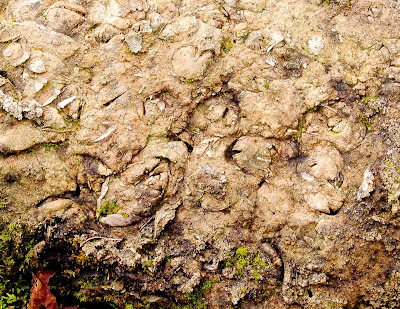 And this close-up shows more of those 'Pentamerids' shapes, especially a dark one near the centre of the photo, as well as a number of other fossils.  This particular fossil is the diagnostic one, restricted in our area to the Fossil Hill Formation, but there are several other fossils found in this layer as well.

Why is it of such interest?

In a few places near the Beaver Valley, this layer of the escarpment contains nodules of chert which were used by caribou-hunting native peoples after the ice age 10,000 years ago to make arrowheads, spearheads and stone knives.  That's a MUCH more intriguing story than merely seeing the geological formation.  I'm pursuing that story when I get the chance, and perhaps sometime in the future I can share that too.  At least I now know what this formation looks like.