Waterfalls are pretty exciting, but I find I'm just fascinated with the whole natural world.  At Inglis Falls this included the roots of the cedar trees spreading over the surface of the bedrock, and somehow finding enough moisture and nutrients to survive.  It also included another interesting rock cut along the road. 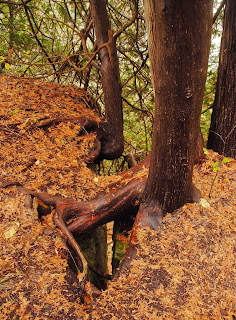 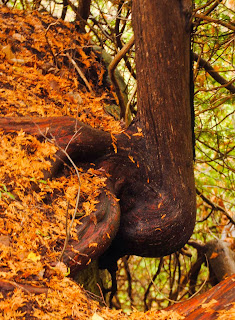 This group of cedar trees was clinging right to the edge of the cliff, the one bridging a crevice that drops 30 feet down, the other growing sideways out of the rock.  All up and down the Niagara Escarpment you see cedars like these growing directly out of the bedrock.  Some of these (though not likely these ones at this heavily disturbed site where an old mill stood) are the oldest trees in eastern North America, having been cored and aged at 500 - 1000 years old! 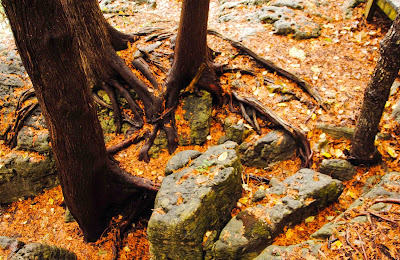 More trees growing on the edge of the cliff, their roots clinging directly to the bedrock, accentuated here somewhat because of the heavy pedestrian traffic as visitors come to view the falls. 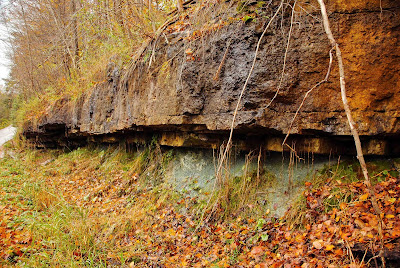 Meanwhile, down the road a short distance is this rock cut.  On the geology hike we did the day before I learned that this is the best local exposure of the Fossil Hill Formation and the underlying Cabot Head Formation.  The difference in the two rock layers really stands out in this picture of the rock cut. 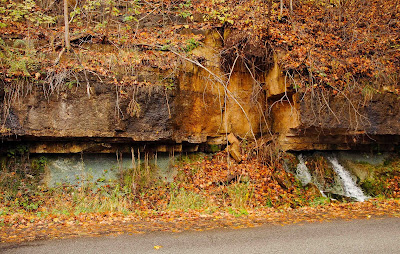 The Fossil Hill Formation is the sold dolostone upper section in this picture, forming a very short cliff.  The Cabot Head Formation in contrast is a blue shale, made up of densely packed clay particles.  Water runs through the dolostone readily, but won't penetrate the shale.  As a result groundwater emerges as springs along the contact between the two very different layers. 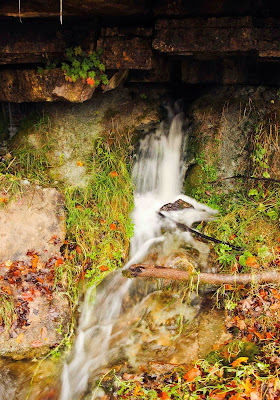 I've seen this spring for years along the road here; it's a popular place to stop and get spring water for drinking.  But now I understand the geology that creates it.