Two weeks ago we headed up the Bruce Peninsula to join a Bruce Trail group for two geology hikes.  The first was at Cape Croker, on the Boundary Bluffs Side Trail.  We had left in blowing wet snow, and it was still raining as we got there, but then the rain stopped, the sun came out (somewhat), and the scenery was spectacular! 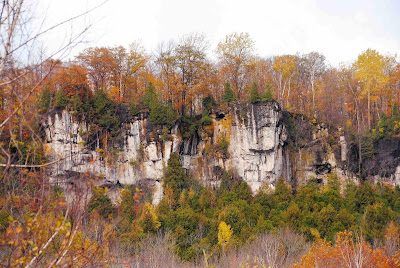 These are the 'Boundary Bluffs', a line of the Niagara Escarpment cliffs on the northwest side of the Cape Croker First Nation.  They're the typical huge dolostone outcroppings in a very thick layer that form the caprock of the escarpment, part of the ancient coral reels that rimmed the east side of the Michigan Basin 400 million years ago. 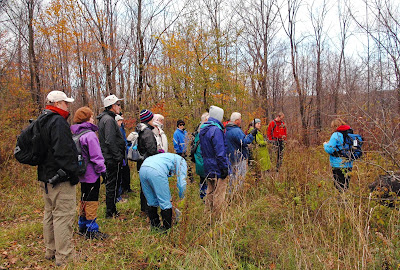 We were there to learn something, so we listened to our leader as she introduced us to the geology of the region.  Although I know a lot of the basics, it was nice to hear the description from someone who knows more than I, to be sure my understanding is correct!  And I was there to see one rock formation layer that I had never knowingly identified, the Fossil Hill formation, known for fossils as you might guess. 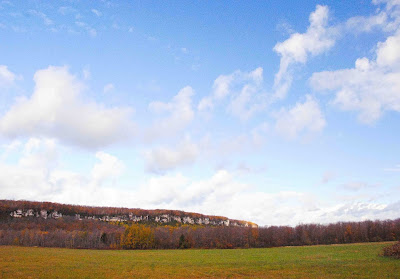 We headed down the trail and across a wet field, with hundreds of tiny frogs jumping our of the way of our boots.  The distant line of cliffs were our goal. 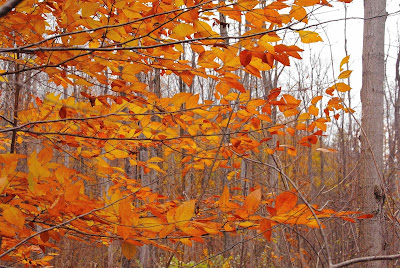 Once we entered the woods, I couldn't get over the colour of the beech leaves, almost fluorescent orange and yellows.   I was wishing this was a photography hike, so we could stop and take more pictures, but we kept pressing on. 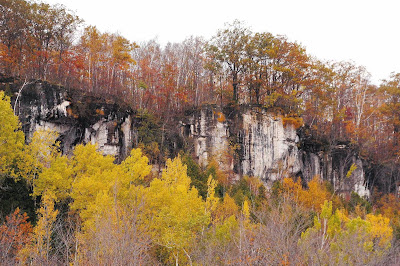 Soon we were under the cliffs themselves, and we headed up the slope to follow the trail to the top, which looked impossible from this angle! 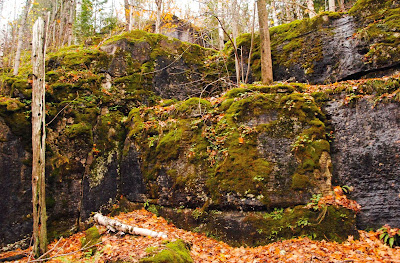 Heading uphill steadily, we came to the huge talus blocks of moss-covered dolostone, fallen down from the cliffs.  This is my favourite habitat along the escarpment, the place where you may come upon the rarer ferns.  Unfortunately the rain started again at this point, and there was even less chance to stop and take photos or hunt for ferns (and this was a geology hike, not a biology hike!). 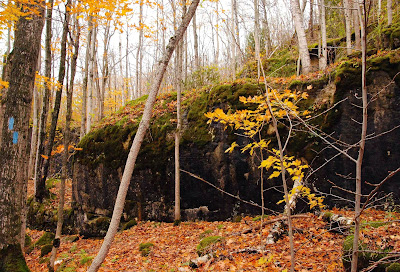 Surprisingly the trail (marked by the blue blazes on the left), headed for the top between these huge rock walls, with only a ledge or two to climb up to bring us out on the top. 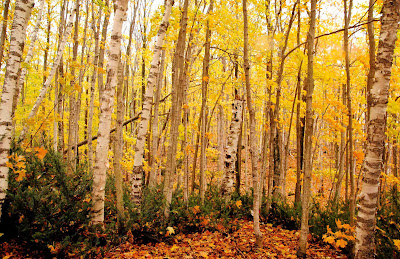 And there we were, in a young white birch and sugar maple forest, on top of the cliffs. Soon we came to a viewpoint from which we could look back down and see the field we crossed just as we started the hike. 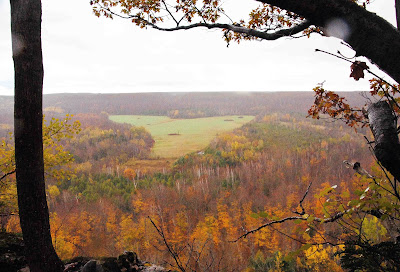 By this point it was raining steadily, so there's a drop or two on my camera lens, but I clicked on regardless whenever I got the chance.  Tomorrow hopefully we'll get down off the cliffs safely .... to be continued!....
Posted by The Furry Gnome at 8:15 PM