Now I'm not a fisherman, but I know the Beaver River has some good fishing.  In the upper reaches of the river I'm told there are brook trout if you know where to find them.  And downstream, where the river flows north into Georgian Bay, we get a run of rainbow trout in the fall that attracts a lot of fishermen. 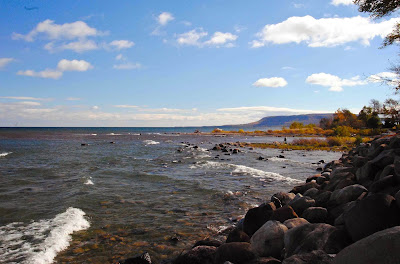 I was in Thornbury 10 days ago, and had some time to spare, so I went down to the shore to check out Georgian Bay and the harbour.  This picture looks east toward Blue Mountain, the escarpment in the distance, and the mouth of the Beaver River is front and centre; the river flows in from the right. 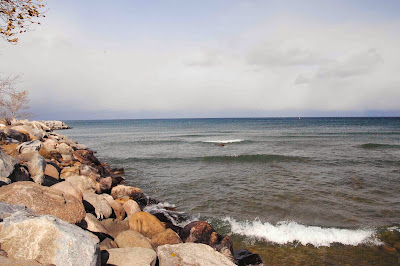 The harbour itself was interesting, a very popular yachting harbour in the summer.  This photo looks west along the breakwater that protects the harbour from bigger Georgian Bay storms. 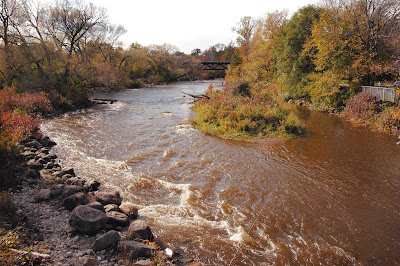 A short distance upstream is a pedestrian bridge which provides easy access between the east and west banks of the river, a walking trail, and an island in the middle.  This view looks south where the river was running high and somewhat muddy from all the fall rains, around a large bend.  It would be nice to take that bend in a canoe!  An old railway bridge, also now a walking trail, crosses the river in the distance.  Can you spot the two fishermen? 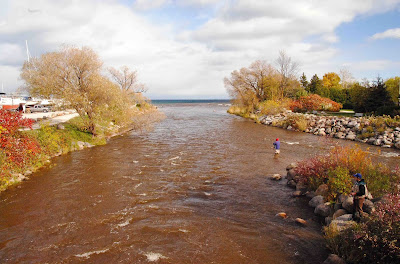 Looking north to the bay, the turbulent brown water heads straight out into the deep blue waters of Georgian Bay in the distance.  This is the popular fishing spot.
. 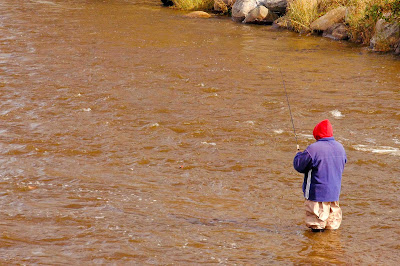 Though I thought this fellow might already have wet feet in spite of his tall boots! 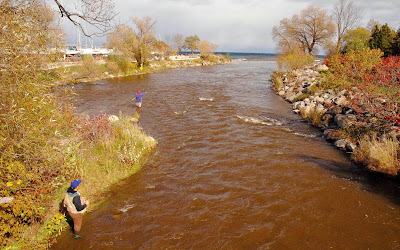 There are nine fishermen in this photo, most of them standing along the left shore in the distance, all spread out just enough to provide room for casting. 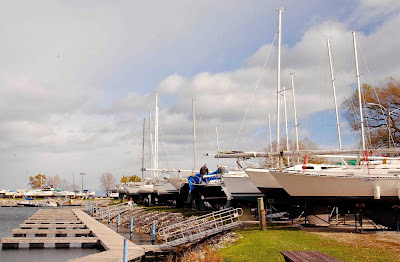 Meanwhile, over in the harbour, almost all the boats were out of the water and up on shore.  The line of sailboats was all waiting to have their masts lowered and be wrapped in blue plastic for winter storage.  You can see them just beginning that on the 4th boat down.

Both the fish and the boats are more signs of the changing seasons.