It was a great winter day when I awoke early this morning.  We found nearly a foot of fresh powder snow from last night, covering everything in white, and the sun rising into a clear blue sky.  Mind you it was 20 below on the thermometer (that's about -4 Fahrenheit for those of you who aren't metric).  Unfortunately I had an early dentist appointment, so couldn't get any morning pictures, but the snowblower did get a good workout. 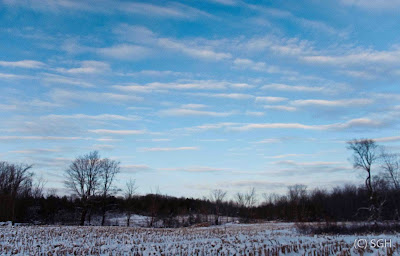 As evening was drawing near though I did get out, again through the farm next door, and this time the snowshoes were really useful.   The sky was still really beautiful, with a lot of linear cloud patterns. 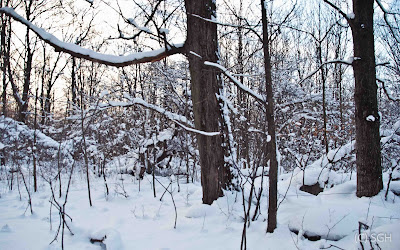 We entered the woods along the old tractor trail as usual, and passed the big trees at the end of the fencerow.  There were no fresh tracks to see today, but lots of deep snow. 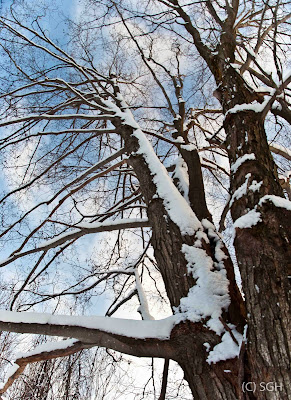 This big sugar maple marks the entrance to the woods, and today had captured a line of snow all the way up.  Before long I also came upon the young beech saplings I can count on seeing. 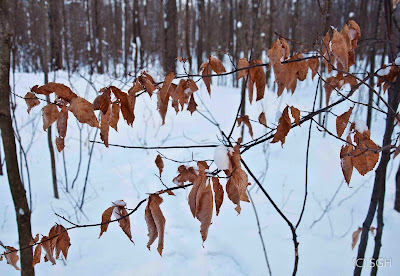 These are one of my favourites in the woods in the winter.  They're the only tree in the woods that tends to retain their leaves through the season and I will likely try several times to get a picture which does them justice. 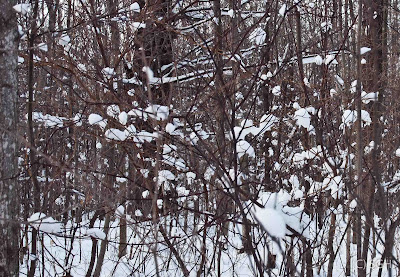 Looking through the woods all the young dogwoods and ash saplings in the understory had captured little snowballs of snow in their branches. 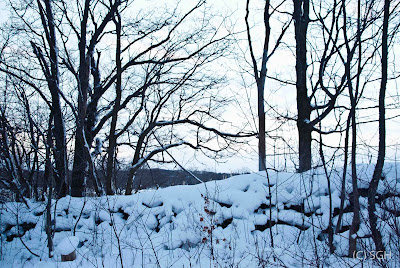 Out across the fields we picked our way through the corn stubble, and headed up the old farm lane.  It's bordered on both side by those old stone fences I mentioned before, here heavily snow-covered.  You can see it's high enough to cut off my view to the west. 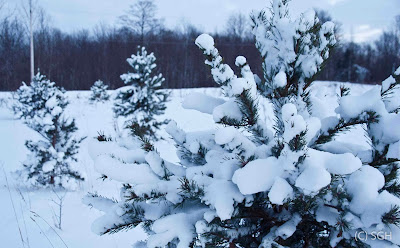 Eventually we crossed the last field and headed out through a vacant lot back to the road, trudging through well over a foot of snow (trudging on my part; leaping on the dog's part). 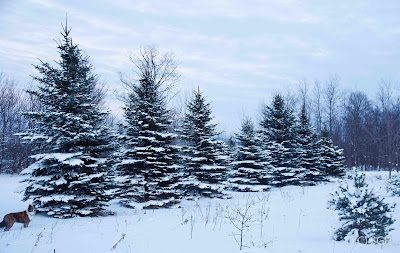 That's Roxie, our dog on the left.  She looks like a coyote except for her white collar, and she loves the snow, plunging her face right down into it after the smell of mice and voles, or putting her nose down and running along the deer tracks.