Our last stop on the drive home way back in late October was Walters Falls, in the village of Walters Falls.  It's a challenging waterfall to get a picture of, as it plunges straight down into a deep gorge in two cascades, but you can only see it from the side.  But as the site of yet another old mill, it's an interesting place! 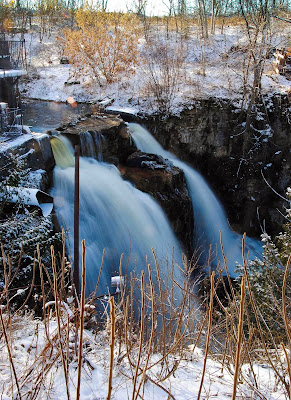 This is the waterfall at the old mill site. There's a fair number of vestiges of the old mill still visible, including the pipe sticking out from the left at the top of the falls.  I actually went back and got this picture today, as I was passing through the village anyway - hence the snow. 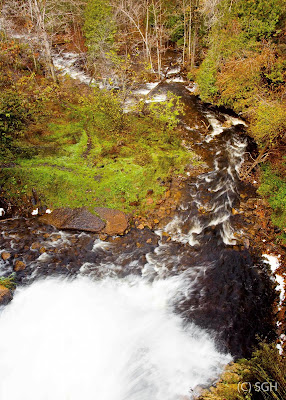 This is the view straight down the falls and the gorge below back in October when we stopped by.  I've put climbing down into this gorge for pictures from below on my list as a future project. 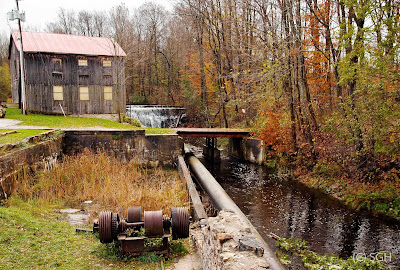 Upstream a short distance is one of the still standing mill buildings, the mill dam and smaller mill pond, along with the pipe that fed the mill machinery.  This seemed very picturesque to me; I'm going to be interested to learn about the history of this place. 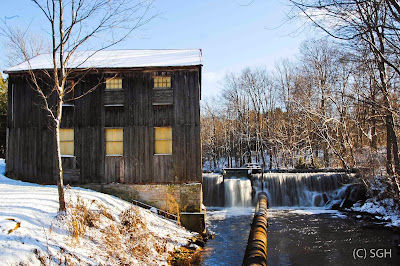 As you walk upstream to the small bridge in the previous picture you get a better view of the mill dam and the pond beyond it.  This is another picture from today rather than late October.  I've learned that when the sun is shining and the sky is blue, you just stop to get what pictures you can, 'cause you never know how long until you'll get that chance again. 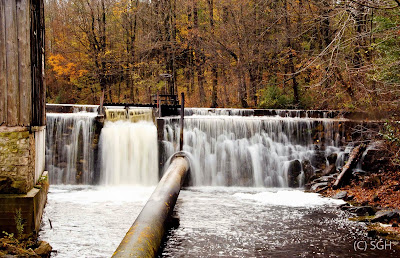 The dam itself was just as pretty as the waterfall, with a high flow of water over it at this stage in October.  Further upstream in the village there is a still operating grain mill.  Another future project is to stop in there and learn about it and get some pictures.