There he was, right on the trail.  I was scouting out a proposed cross-country skiing route in Kimberley Forest.  I came around a corner out of the larch plantation, past some sumachs and onto the Bruce Trail, and he was sitting directly ahead of me on the trail. 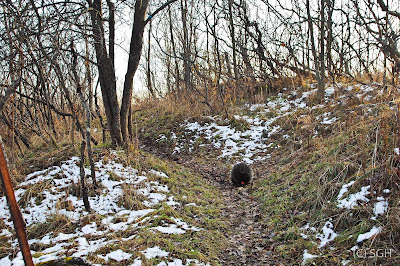 Porcupines are pretty common animals in the wild around here.  They particularly like the bark of pine trees, and often do a lot of damage in pine plantations.  But generally they're harmless and slow - unless you have a dog off a leash!  This one certainly didn't seem inclined to move out of my way. 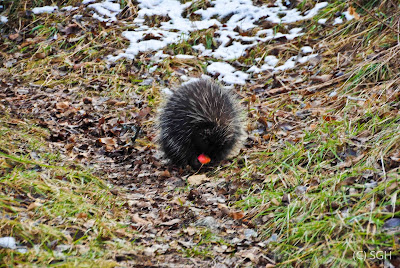 He was munching on a wild apple, and didn't even seem to look up as I stepped toward him and took a moment to get the camera ready. 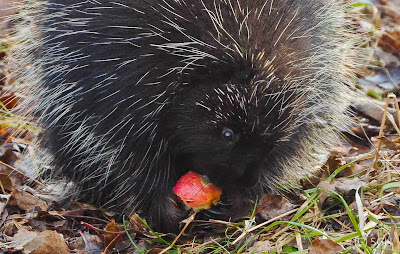 But perhaps he was watching me out of the corner of his eye. 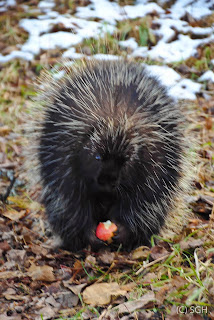 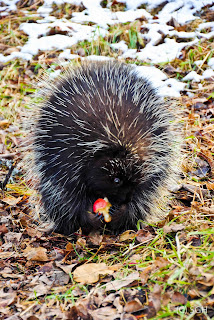 He looked up briefly, though his eyes are so black that they're hard to pick out among the fur.  Then he went back to munching. 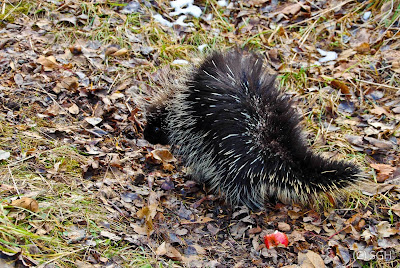 Finally he decided I was perhaps a threat as I stepped closer.  He turned from the apple, raised his quills in the usual 'watch out - don't come closer' posture, and started to amble off.  At this point I backed off so he could go back to his apple, which he did.

This was 10 days ago, before the 6+ inches of white stuff and -15 temperatures we have out there now! 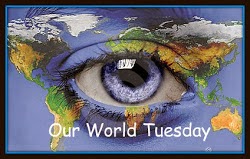