We headed into the woods at the back of the neighbouring farm today for the first time this season.  I usually only walk here in the winter, when I can let the dog run free and tire her out!  I put on the small snowshoes to help pack the trail, though I didn't really need them.  And immediately we started finding fresh tracks - not as obvious wildlife as yesterday's porcupine sitting photogenically on the trail, but the much more typical evidence you find of wildlife you rarely see.  We also found turkey scratchings! 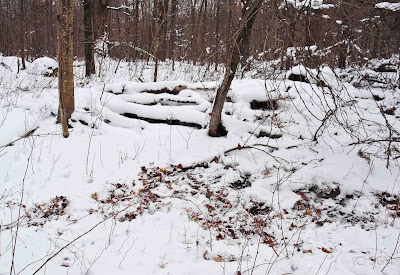 These are what I interpreted to be turkey scratchings.  I don't think I've ever seen this before, but turkeys are becoming more and more common around here.  A group of them had obviously scratched away at the snow, uprooted the leaves below, in search of food.  Another pattern I can watch for in the woods.  Presumably they do this all fall, but of course you don't notice it until we have a snowfall. 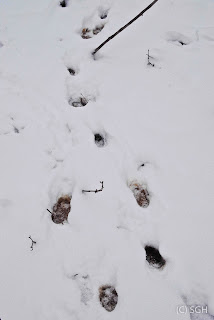 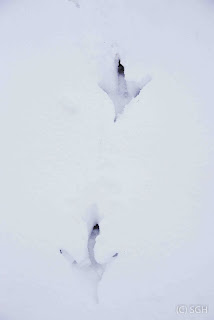 The first tracks we saw appeared to be a pack of coyotes, and they appeared to be following the group of turkeys.  First time I've seen turkey tracks in this woods, let alone turkey scratchings!. 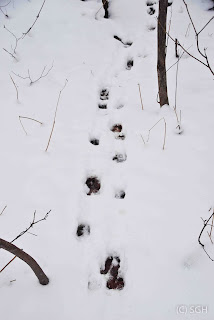 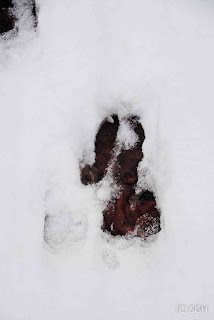 There were certainly lots of deer tracks, a small group of them following each other along the trail.  You can easily recognize the cloven-hoofed footprints with the two large front toes. 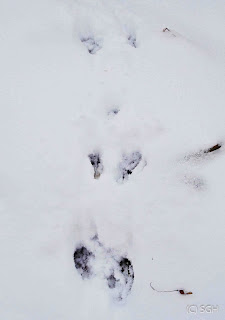 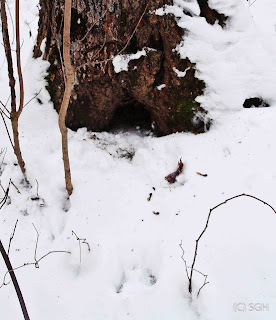 There were snowshoe hare tracks, though I didnt' get a picture, and these tiny squirrel tracks, ending appropriately at a hollow tree.  That's five different species of unseen wildlife passing by when I wasn't around. 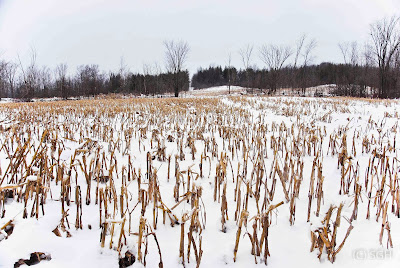 Then we came out the cornfield, and I was glad to see it had been harvested, so we'll be able to walk here this winter.  It's a great, convenient place to snowshoe, and the owners welcome us to the trails. They're now mostly winter weekenders, although it is their old family farm. 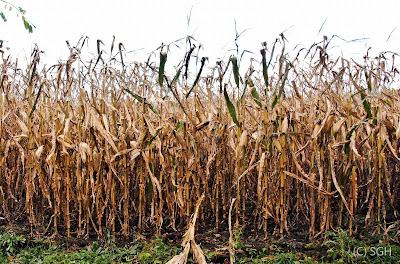 Three weeks ago when I walked here to check it out I was met by this 8 foot high wall of corn at the spot where the above picture was taken. These fields have been hay as long as I've walked here, but with the price of corn this year, the hay was plowed up and corn planted in every corner. 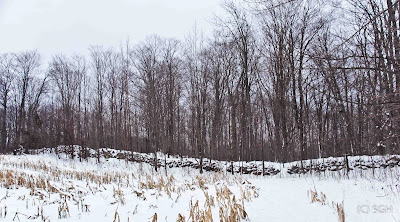 There will be several visits here over the winter.  The most interesting feature of this farm is the group of old stone fencerows - not jumbled piles of rocks gathered from the fields, but actual dry stone walls, in some places five feet high and four feet thick.  These are the most beautiful stone walls I've ever seen on a farm in Ontario.

But at this point my camera battery ran out, so those will have to wait.