It's the end of October tonight, and the biggest seasonal change of the year is here.  The long spring/summer/fall season seems to end quickly, with numerous fairly abrupt changes to routine and things to be done.  One thing that symbolizes the change are sunrises, for in late October we're often up before the very late-rising sun, and I sometimes get photos of the sun rising over the trees. 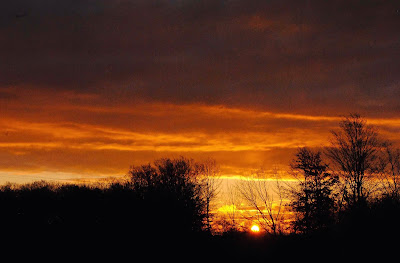 These are the darkest mornings of the year, noticeably so for me.  Later in the winter, after we've had a chance to catch up to standard time, the sun will rise late as well, but by then there's usually snow on the ground, which makes the overnight hours especially if there's a moon, remarkably bright.  But in late October there's no way around it; it's just dark. 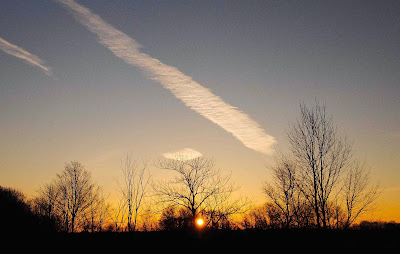 So in the meantime, all the outdoor things from deckchairs to the garden hose are packed away.  The garlic was planted 2 or 3 weeks ago, and the garden is ready to sleep.  The mower deck has been switched for the snowblower on the big lawnmower, and the snow tires dug out to be put on the vehicles.  The garage has been cleared out enough that we can get at least one car inside during the snowstorms! 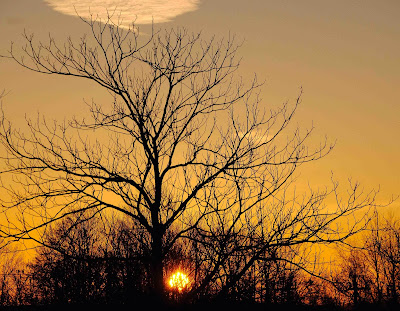 But there are changes to routine too.  As the sun moves south it shines in a different window and I have to sit in a different chair for my morning coffee to avoid the glare.  After the time changes Saturday night, the dog will have to be walked before dinner if you're to avoid the dark roads.  And of course it's winter coat, gloves and toque time, depending on the actual temperature. 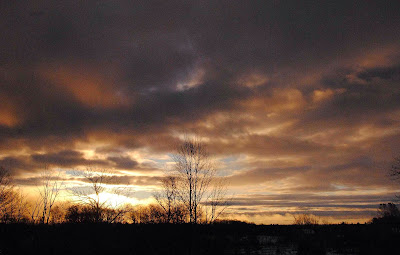 And suddenly, after months of growing plants and birds singing, the trees are bare, and we are reduced to the few birds that stay for the winter - chickadees, blue jays, mourning doves, goldfinch, nuthatches and crows.  Over the course of the entire year, no set of changes seems more complete and sudden than the seasonal change at the end of October. 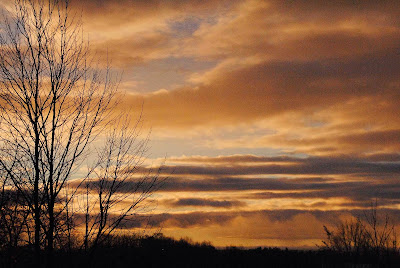