I should have known, the little bit of sleet on Tuesday afternoon was nothing - just a foretaste of what was to come!  We woke this morning to 4-5 inches of the white stuff.  Now I enjoy winter, but on Oct. 24th!  We can't remember a snowfall like this this early in the season - ever. 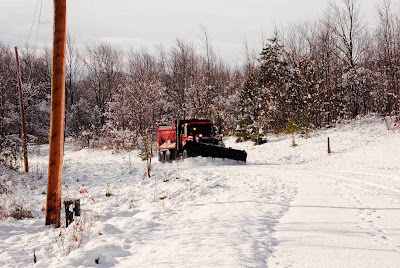 By mid-morning they had finished the main roads and the snow plow was coming by for its first run of the season.  At least they do know how to handle snow up here. 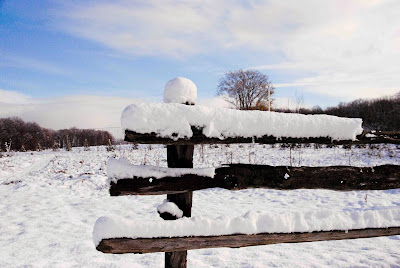 The yard was white, with 3-4" accumulated on things like this fence and all the weeds of the meadow were knocked flat under a blanket of snow. 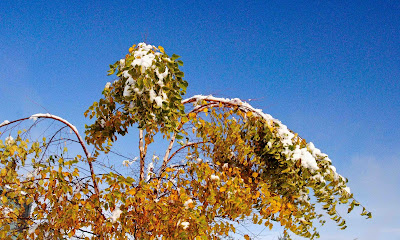 A lot of trees still have leaves, so branches were seriously bent under the heavy weight of wet snow; it did melt fast though, so I don't think many branches broke. 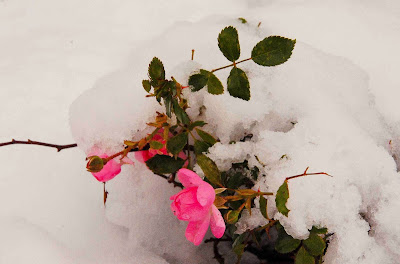 The roses I pictured against a background of sleet on the ground two days ago were now a lot colder, and covered with snow.  I couldn't even find the actual blooms I posted on Tuesday. 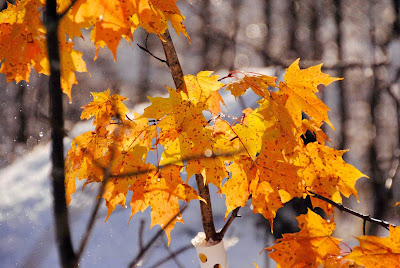 Yes, there are lots of trees with some leaves left; fall isn't quite over yet. 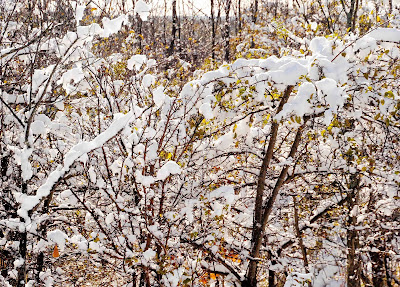 But the branches of trees and shrubs were laden with the white stuff - always hard to get a good picture of in my opinion, even though it seems very attractive to my eyes. 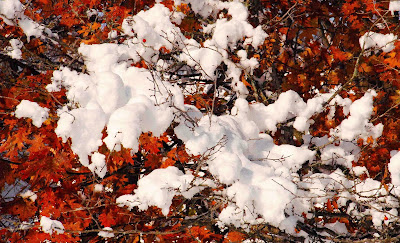 I liked this pile of snow clustered on the fine twigs of a hawthorn tree, standing just in front of a red oak, with its reddish leaves.  The oaks are about the last to drop their leaves here. 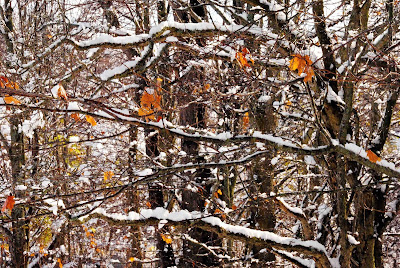 I don't know what you think of this picture, but it captured the mood today as well as any I took this morning as far as I'm concerned. 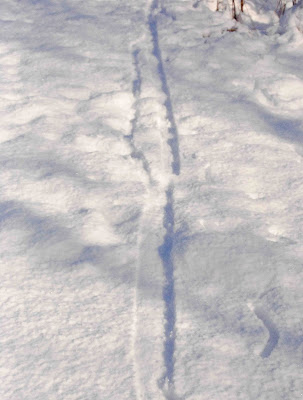 But this line in the snow puzzled me briefly.  No footprints or dog tracks nearby, straight across our driveway and along the side of the road.  Was someone trying out their cross-country skiis already? 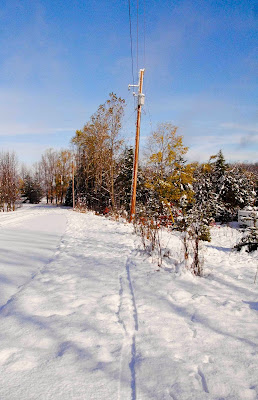 Then I looked up and realized, it was the line created by snow which had accumulated on the hydro line when it all fell off at once, in a reasonably straight line along the road.  Walking the dog I saw the same thing where hydro lines cross the road.


I'll link this post to Our World Tuesday (even though it's Thursday already), just to show the world our snow.  Among 137 posts linked there this week, there isn't a single one of winter!