Had a great, if exhausting and muddy time on a Bruce Trail Geology Hike today.  It was a huge group of 46 hikers and we were all there to learn about the geology of Wodehouse Karst, a series of sinkholes with disappearing streams, which re-emerge as springs down below the escarpment. 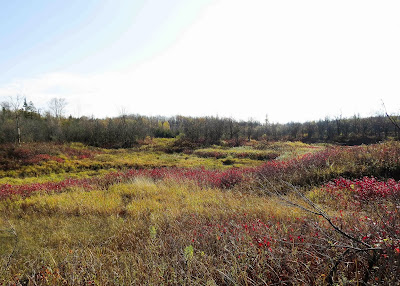 This was the view when we first arrived at the karst.  You're looking across the valley of Wodehouse Creek to the forest beyond.  Down in the valley, on the right hand side of this picture, are three major sinkholes, and several smaller ones.  In the spring there is too much water flow for the sinkholes, so the water backs up and this entire picture would be a lake! 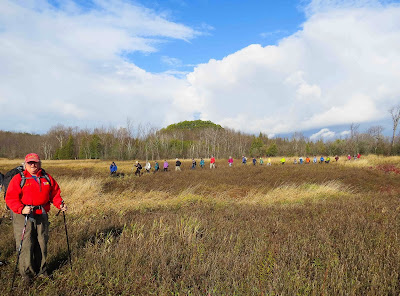 Here the group heads out on a field to the south to view two other nearby sinkholes.  It's a long line of hikers when you get this many participating! 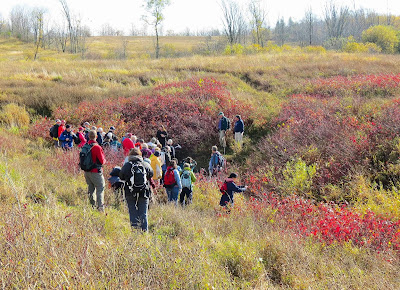 This is the first sinkhole we visited, about 20 feet deep at the centre, and quite large, but containing only a tiny stream, though it gurgles loudly as it plunges into the limestone rock.  The limestone, or in this case dolostone, is part of the reason for the sinkholes, for it erodes along cracks through chemical reactions, forming underground passageways for the water. 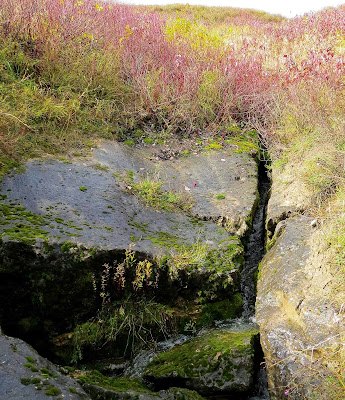 In this picture you can see the tiny stream flowing fast between two large slabs of dolostone (straight toward you on the right hand side), abruptly turning left, and disappearing.  You had to be there to hear the loud gurgling - picture a tap releasing a stream of water 3" in diameter, plunging into a hole in the rock! 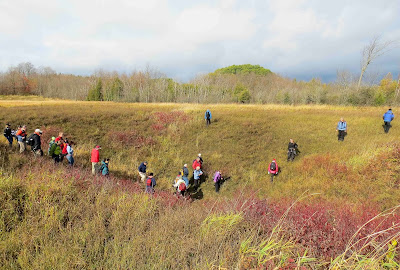 Here the group heads through another large sinkhole again containing only a tiny trickle of water - down one side and up the other.  Both of these sinkholes are perhaps 100 feet long or more, and 50 feet wide, cutting down through the glacial till to reach bedrock where the water can disappear into the rock.  The entire field in this picture would be a lake during the spring flood. 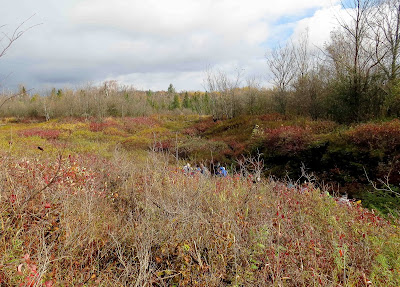 Here you can hardly see the 40+ people in the picture, as they've headed down into the main valley to check the sinkholes from the disappearing Wodehouse Creek.  This creek is a good size, perhaps 8-10 feet wide, and a foot deep as it approaches the sinkholes.  It spreads out in this valley and reaches up to 15 sinkholes, depending on the amount of flow.  At this time of year, all the sinkholes are buried beneath thick vegetation. 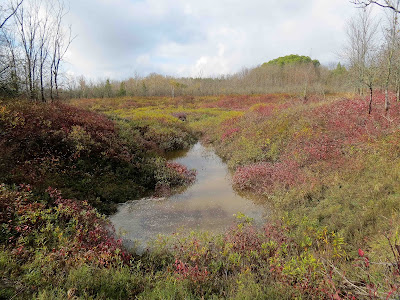 This is the most visible of the larger sinkholes.  The stream has cut a cul-de-sac in the glacial till where it pools, and plunges downwards.  This water is about 8-10 feet deep, and there is a steady flow 4 feet wide and 6-8 inches deep flowing straight towards us.  You can imagine how fast the water is disappearing at the bottom of this pool. 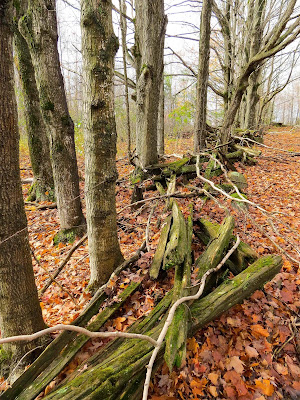 We continued our walk for some distance, past all kinds of beautiful scenery in the woods and along the trail.  I was struck by this original 'snake' split rail fence, built with no fence posts probably a century ago. 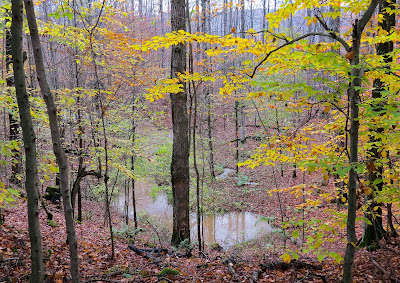 After a challenging muddy walk down a tractor trail to the bottom of the escarpment, we came to the corresponding springs from the karst.  To keep the geology simple, there is a very thick dolostone layer that erodes and forms cracks, enabling the water to flow through underground, but then there is an impervious layer of shale, forcing the water to travel sideways until it emerges as a spring.  This is one of the 3-part spring we saw. 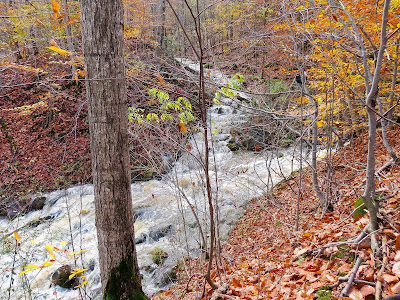 Here is the stream where the three springs join and the water starts its wild ride down the steep lower slopes to the river far below.  This stream is about 15 feet wide, and nearly a foot deep, all emerging directly from the ground, a fascinating feature in this area.  Studies have come up with varying results for the length of time it takes water to flow from the sinkholes to the springs, which are about 1/2 a kilometer away, from 45 minutes to 12 hours.  It varies with the season and the level of the flow; today it was very high!