Our geology hike continued some distance after we saw the sinkholes and then the springs where the streams re-emerge.  We've had plenty of rain, including the night before, and the soil along here is mostly clay, now covered with fallen leaves.  So you can guess how muddy and slippery this was underfoot.  In places it was a real challenge!  Good boots and a walking stick were important today. 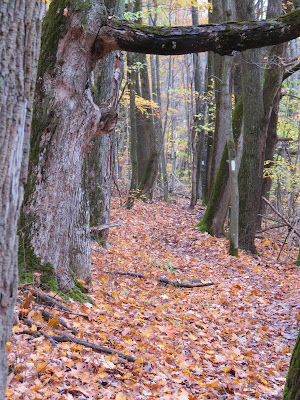 However, the trail was a beautiful walk, and the rain held off all day.  Note the two white blazes marking the trail here, along between a number of big old sugar maples. 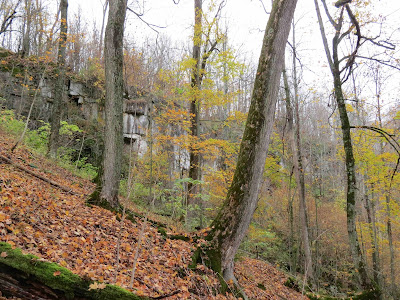 Most of the way the trail was below the escarpment, and you could look up to see the dolomite cliff, varying from 30 to 60 feet above you.  The slope is quite steep, so it's a challenge to find a trail route that is reasonably flat.  Actually, it's quite a unique habitat with a number of interesting species, especially of ferns. 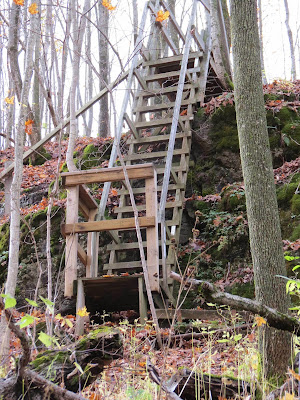 But to get below the cliff in this location, you climb down a ladder.  It's really easy actually, but do you know how long it takes a line of 46 hikers to climb down a ladder like this?  This was where the group got really spread out, as others waited at the top for their turn. 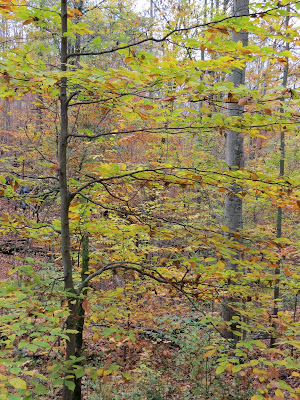 The beech trees were at their best, a mix of yellow, green and brown leaves in all directions.  They seem to turn colour a little later than the maples, but they have a special beauty all their own.  And the young saplings tend to hold their branches flat, creating layers of leaves. 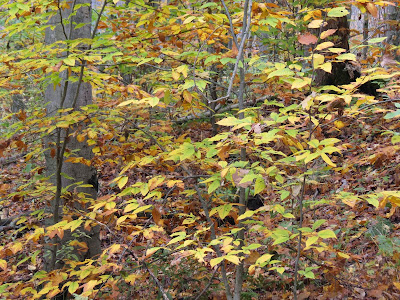 These won't the the last pictures of beech leaves you see here! 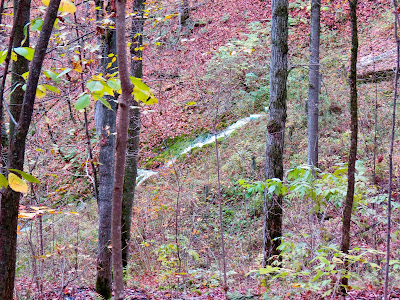 Along the way we passed several other springs, all of which emerge along that geological line of shale (the Cabot Head Formation if you want the correct terminology), and all of which are fed by sinkholes in the dolostone, above the escarpment.  This is a major one, routed through pipes installed to provide water supply for the village of Kimberley in the valley below. 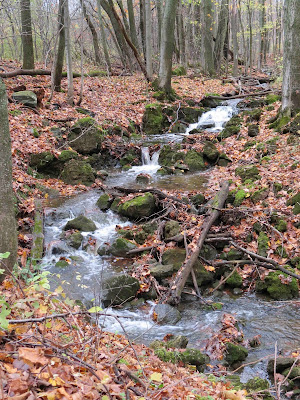 This one interested me because I've been by this gully numerous times in the past 3 years and never seen water here.  Obviously water levels are high this fall, and the recent rains are providing plentiful run-off. 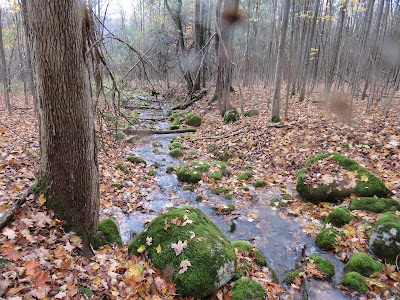 And this is the most adventurous spring, which attacked me.  I stepped sideways to position myself for the picture, and slipped on the mud, landing on my bum (but staying out of the water luckily).  I took the picture anyway, but later realized there were splats of mud on the camera filter.  I always keep a filter on the camera to protect the lens; it proved its usefulness here! 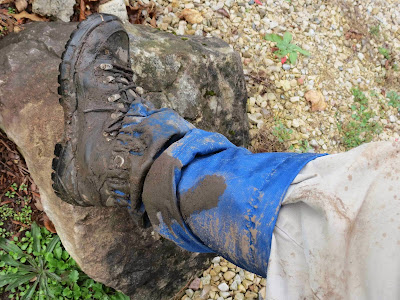 Just a bit of the mud by the end of the day.  I look a lot cleaner than I felt by this point.
Posted by The Furry Gnome at 8:49 PM